I find few things more interesting than gaining insights into the private mind of a public figure. In Avenues of Faith—a delightful, if difficult, little book—Charles Taylor, one of the preeminent public intellectuals of our day, gives us a glimpse into his inner life by talking with Jonathan Guilbault about five authors/books that have proved most important to his thinking. I’ve often thought that, if ever I were to teach a systematic theology course, I’d include literature—as I do on my course on modern thought—because it’s literature that often best expresses the complexity of the human condition. Taylor here proves my instinct correct.

His selection is interesting, both for its content and for the order in which the authors discuss them. They are Maurice Merleau-Ponty’s Phenomenology of Perception, Friedrich Hölderlin’s Poems, Charles Baudelaire’s The Flowers of Evil, Fyodor Dostoevsky’s The Brothers Karamazov, and Brother Émile’s Faithful to the Future: Listening to Yves Congar. The order is interesting because Taylor intentionally moves from the most difficult to the most straightforward—and, I’d suggest, from the non-Christian to the Christian, at least in terms of specific concerns. 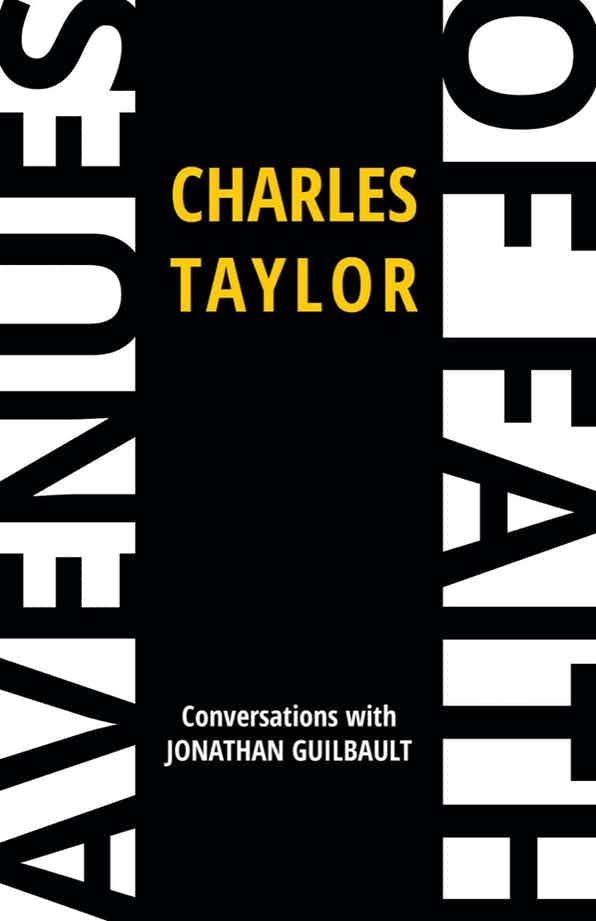 Death opens the gates to resurrection. The pathways to faith are diverse, but all carry components of death and renewal.

In Avenues of Faith: Conversations with Jonathan Guilbault, Charles Taylor takes readers through a handful of books that played a crucial role in shaping his posture as a believer, a process that involved leaving the old behind and embracing the new.

To those familiar with Taylor, this makes sense. He includes Merleau-Ponty because Taylor’s early training in the rigors of Anglo-American philosophy had left him with a haunted feeling that there were more things in heaven and earth than are considered legitimate even to dream about by those hardcore linguistic logicians. Taylor clearly felt—and feels—that “cross pressure” which he discusses in A Secular Age, and that reflects a fear that something may have been lost in the rational project of modernity. Continental philosophy, specifically phenomenology and its offshoots in thinkers such as Sartre and Heidegger, at least acknowledges that life has a mysterious, complex, inexpressible dimension, and that the biggest questions we face—of love, belief, ultimate purpose—aren’t those with which mere logical analysis can even frame as questions, let alone offer answers. And so the discussion of Merleau-Ponty sets the stage for reflections on Romanticism (Hölderlin), early Modernism (Baudelaire), and Christianity in modernity—both in its conflicted, angst-ridden form (Dostoevsky) and its more ecclesial and contemplative form (Brother Émile/Yves Congar).

Taylor is right that belief isn’t simply a matter of epistemology. Those approaches to the faith that have made the epistemological question the sole, ultimate foundation have taken the Enlightenment’s bait. As a result, they’re vulnerable to the same kind of problems to which the Enlightenment itself fell prey: an inability to account for the full richness of existence; and an individualism which can’t harmonize those two basic human drives—the desire to be free and the desire to belong.

Approaches to the faith that have made the epistemological question the sole, ultimate foundation have taken the Enlightenment’s bait.

Taylor finds the key to that latter dilemma in the Romantics. For Taylor, Hölderlin seeks to overcome human alienation through art. It’s interesting that Taylor interprets Baudelaire, the early modernist, as not so much reacting against Romanticism but as continuous with it, seeking to find that elusive unity in part by refusing to see reason as the solution. Instead, Baudelaire finds solace in facing the chaos of this world and identifying himself with all those who feel as exiles: the outcast, the downtrodden, the dwellers on society’s margins. In this, he sees affinities with the Christ who took flesh and identified himself with the lowest of the low: the prostitutes, the tax collectors, the thief on the cross.

With his discussion of Dostoevsky, Taylor shifts the focus to matters of authority. He offers a compelling reinterpretation of the famous line “If God doesn’t exist, everything is allowed,” which rejects the standard view that this is a justification for moral nihilism. Instead, Taylor claims that in context it’s rather a justification for the use of any means necessary in the achievement of whatever new moral or political absolutes people choose. Perhaps that idea has something to say to us after the summer riots of 2020 and the storming of the United States Capitol Building, where the breakdown of traditional democratic processes, built as they were originally on a common vision of society, now seem to lack any justification beyond themselves.

Finally, his discussion of Brother Émile and Yves Congar reveals both his mystical leanings and his historicism. What he hints at throughout the book is made explicit: he considers Christianity a form of religious consciousness, expressed dogmatically, but subject to the ongoing historical process. Taylor’s Hegelianism emerges, along with his political concern for the poor and the disenfranchised. He is attracted by Congar’s interest in tradition as a living, ecclesial reality which makes dogma a plastic phenomenon designed to serve a vision of catholicity characterized by greater and greater inclusion. Hence in the closing paragraphs, he expresses polite but clear criticism of John Paul II and Benedict XVI, who he regards as seeing catholicity in dogmatic and thus more exclusive terms.

Taylor’s Christianity is arguably that of a latter-day Romantic, perhaps somewhat akin to that of Friedrich Schleiermacher. That might make orthodox Protestants nervous, but I would suggest that it should not prevent us from reading him with profit. I don’t look to Taylor for theological insights but for his analysis of the complexity of the human condition, particularly in this age of modernity: the dramatic limits of instrumental reason, the cross-pressured nature of life in the modern world, and the way in which the act of faith is experienced differently now than 500 years ago.

Once cultural tendencies have been exposed for what they are—particularities of our historical moment and not necessary truths of nature—it becomes easier to resist them.

Teaching his A Secular Age to undergraduates last fall, I was astounded at the enthusiasm of my students for this long, dense, and difficult text. Many of them have commented to me how it helped them not only understand our cultural moment but also why they often find Christianity so hard, even as their faith remains strong. This is where Taylor is so good and useful. He has this uncanny ability to see below the surface of society to the deeper issues that shape the way we all think. Christianity is hard not simply, or even primarily, because “science has proved it wrong”—how could material science ever credibly make such a comprehensive metaphysical claim? It’s hard because of the way the world strives to shape our thinking, even our self-understanding, in ways that find Christianity tasteless, or immoral, or childish. Once those cultural tendencies have been exposed for what they are—particularities of our historical moment and not necessary truths of nature—it becomes easier to resist them.

Taylor’s Avenues of Faith is (mercifully) much shorter, but it too wrestles with big questions. Love, freedom, belonging—exactly those things of which the Bible speaks and of which today’s world has different conceptions. Christians must navigate these big questions if we’re to remain faithful. Taylor again underlines this, without avoiding or simplifying the challenge—and it leaves me more convinced than ever that great literature should feature in every systematic theology course.