In January, Mary Willson, TGC’s director of women’s initiatives, asked me to creatively and clearly summarize the books of Genesis, Exodus, Leviticus, and Numbers for the women who would attend The Gospel Coalition 2018 Women’s Conference. The video would introduce the conference theme from Deuteronomy: “Listen and Live: Promised Grace for Rebel Hearts.”

We wanted viewers to enter into Israel’s narrative. We wanted them to feel the urgency of the moment: Will we listen to God’s law and live?

I wrestled with doubt and fear approaching this project. How could I summarize such long and detailed books into one video? I don’t have any theological degrees. Why didn’t they ask someone more qualified?

Thanks to the prayers and encouragement of my husband and my small group, I moved forward in (imperfect) faith.

Mary Willson and Ann Westrate patiently answered my many questions as I wrote the script. My pastor’s preaching through the book of Genesis framed my understanding of creation and the patriarchs.

I was helped by Nancy Guthrie’s podcast, Help Me Teach the Bible, especially the episodes on Exodus and Numbers. The Bible Project’s video on the law helped me to see the larger story of the Pentateuch. Various articles and sermons from Desiring God and TGC were also useful.

I love how Hamilton masterfully develops lyrical motifs. I sought to do the same thing by repeating and developing words and phrases like “But God,” “seed,” “promise,” “generations,” and “40 years.”

The request was for a five-minute video, but I ended up writing a script that took 20 minutes to perform. After lots of painful editing, we settled on an 11-minute script.

Act 1 of the script covers everything from the garden of Eden to slavery in Egypt. Act 2 takes us from Egypt to Mount Sinai. Act 3 brings us from Mount Sinai to the Plains of Moab.

As I wrote the script, I imagined the corresponding music and sound effects. I reached out to Alex Hitchens, a Grammy-award-winning music producer, to score the film.

We’ve worked together before, and I’m always blown away at how he’s able to take my non-technical explanations of my musical vision and turn them into sonic masterpieces.

I told Alex I wanted the music to sound like The Prince of Egypt meets Inception meets Black Panther meets The Dark Knight. He did all that and more. 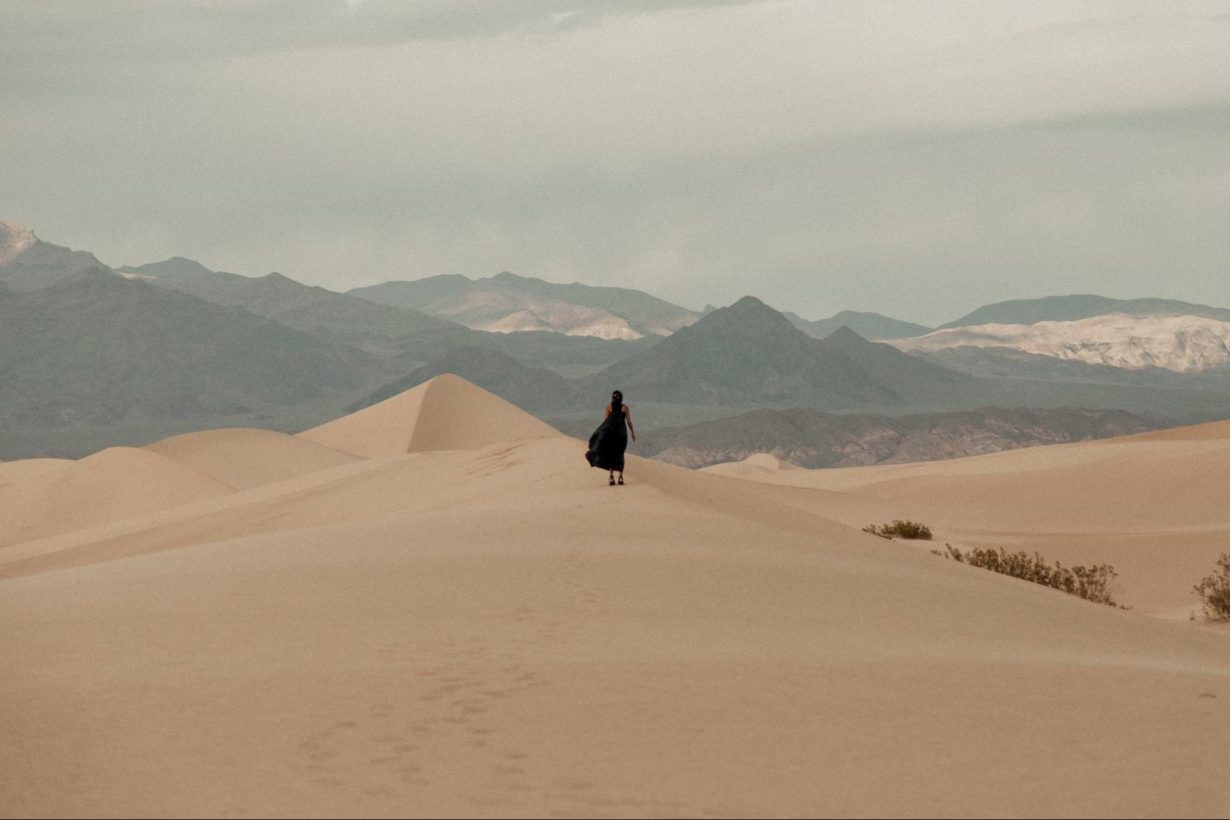 It was important for the music to match the emotion of the narrative.

For example, you’ll hear the music slowly crescendo from the introduction of Moses up to the chorus, “Sing to the LORD for he has triumphed gloriously!” and the rap, “Ready for milk and honey!” Then you’ll hear the music abruptly cut off as I say, “But he led us through the wilderness . . .”

This is because when you read the book of Exodus, you feel the despair of ruthless slavery, then the rising hope of redemption through Moses, then the explosion of praise after crossing the Red Sea. Then, abruptly, the celebration stops. We’re in the wilderness, and we’re hungry. We’re wondering, Is this Yahweh the real deal? Or did he bring us out here to die? 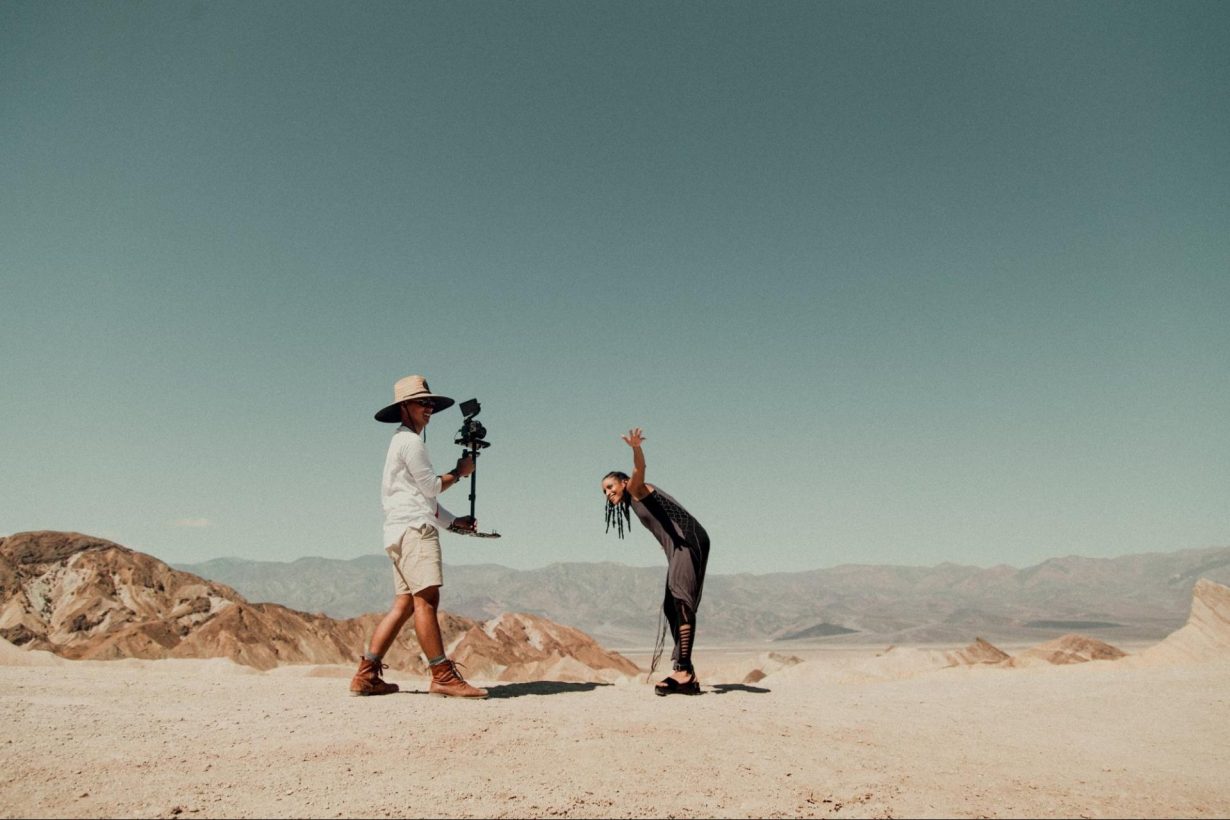 Once the script and music were in place, our video team took over and amazed me with their ideas and execution.

Our good friends, Juan and Haylee Garcia, are passionate believers in Christ who own a video company called Light Foster. They decided on our shooting locations (Death Valley and Red Rock Canyon).

My husband, Jon Aragon (aka Jon Doulos), oversaw creative direction and developed the storyboard. Juan directed the shoot as he and Jon shot the film using two cameras. 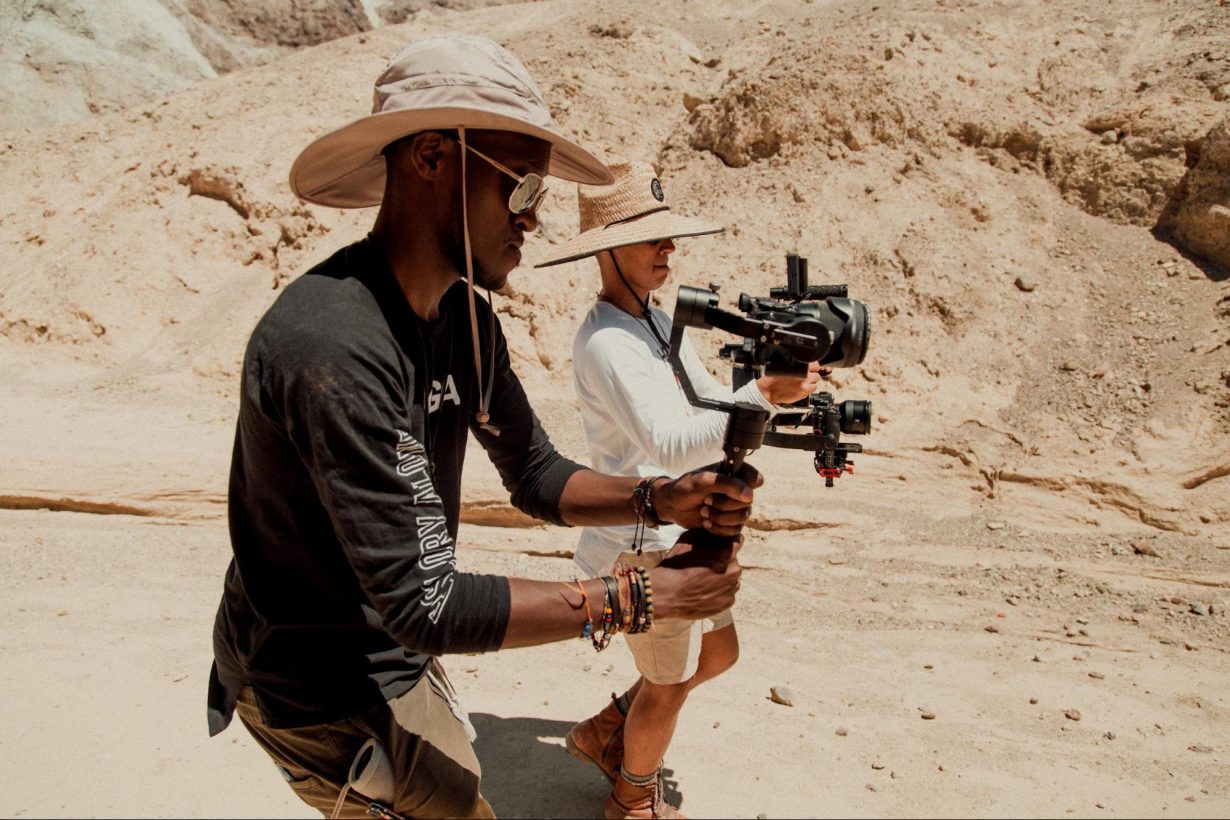 Haylee was our director of photography, and she managed the wardrobe and makeup. She was a calm voice of humor and grace to me as we endured 100+-degree weather in the desert for three straight days of shooting.

Shooting the film with Juan and Haylee was like being on one extremely intense and long double date.

The trip wasn’t physically easy at all. At times we were extremely fatigued and hungry. A million things could have gone wrong that would have made this film impossible to shoot.

We saw God take care of all of those details, and our faith was built up. He allowed me to experience a tiny drop of the hunger, heat, and danger of the wilderness that I had been studying in his Word. And he showed me that he was with me through it, even as he was with Israel of old. 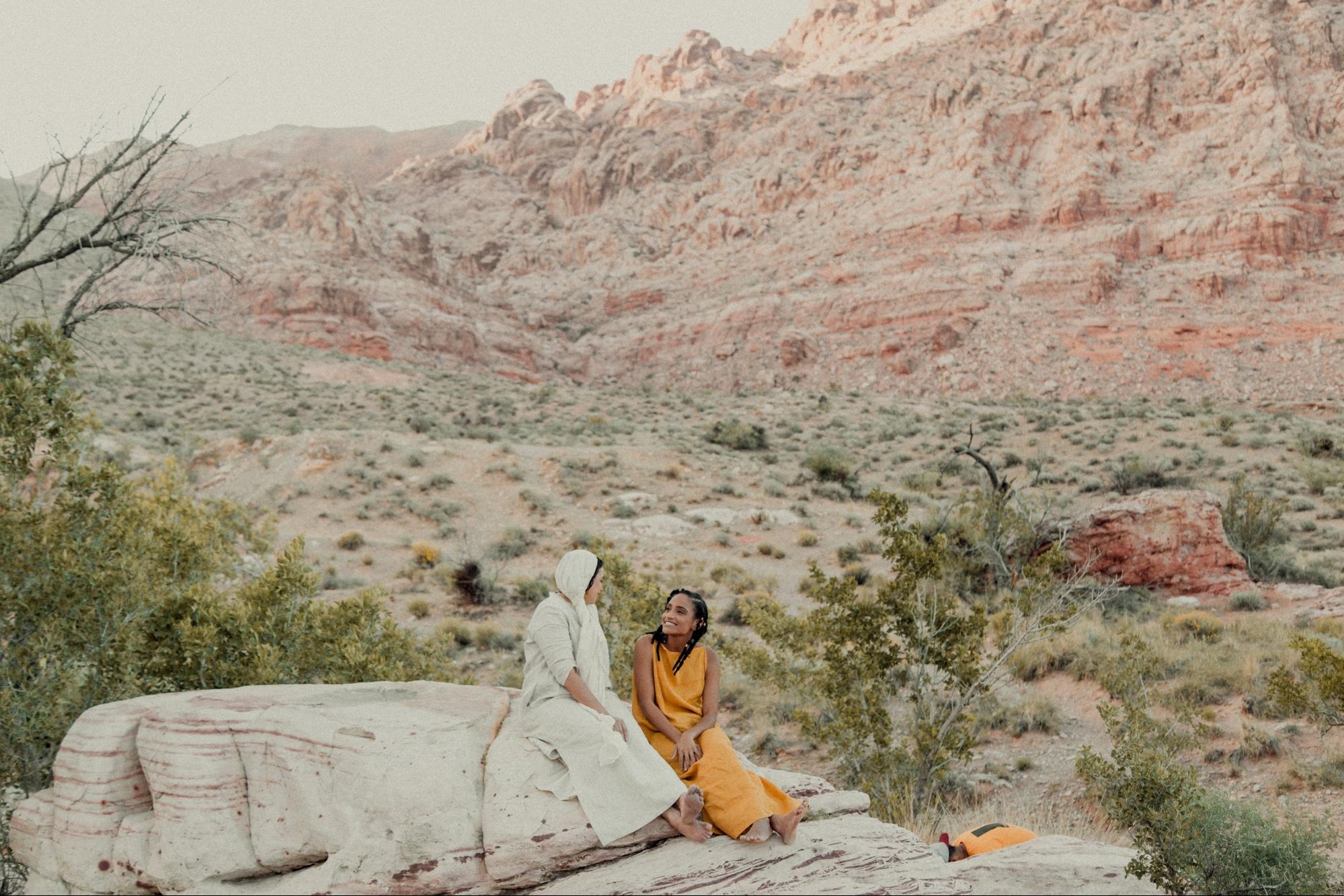 Karen Ellis joined us for the first day of shooting at Red Rock Canyon. Her professionalism and easygoing personality made it so easy to work with her. And she delivered her lines beautifully.

It was surreal to be sitting on a massive rock in the desert, playing the daughter of a woman I deeply admire from afar. We kept saying, “I can’t believe we’re running around the desert together!” 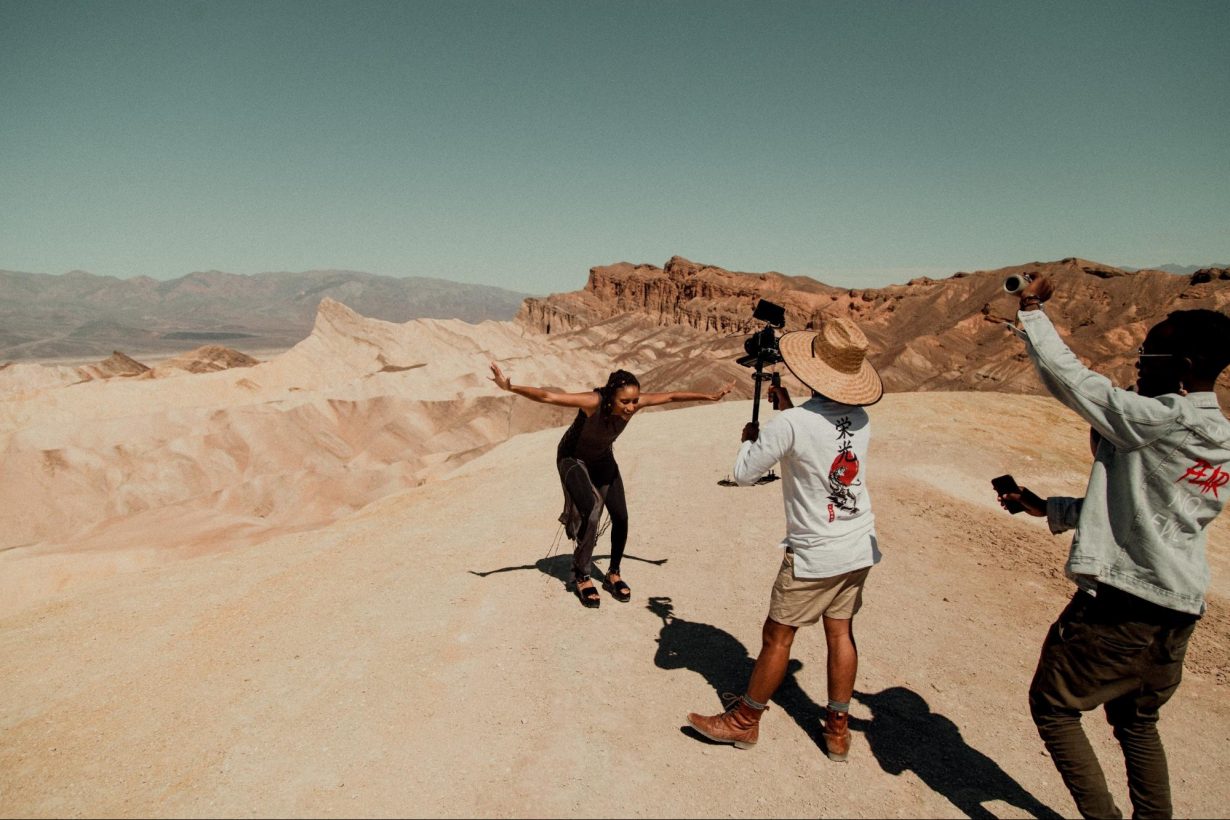 The shots that Juan, Haylee, and Jon came up with blew my mind. I only contributed a couple of visual ideas to the film. We drew inspiration from a short film called Birth Pangs, as well as Black Panther and the show The Last Kingdom. 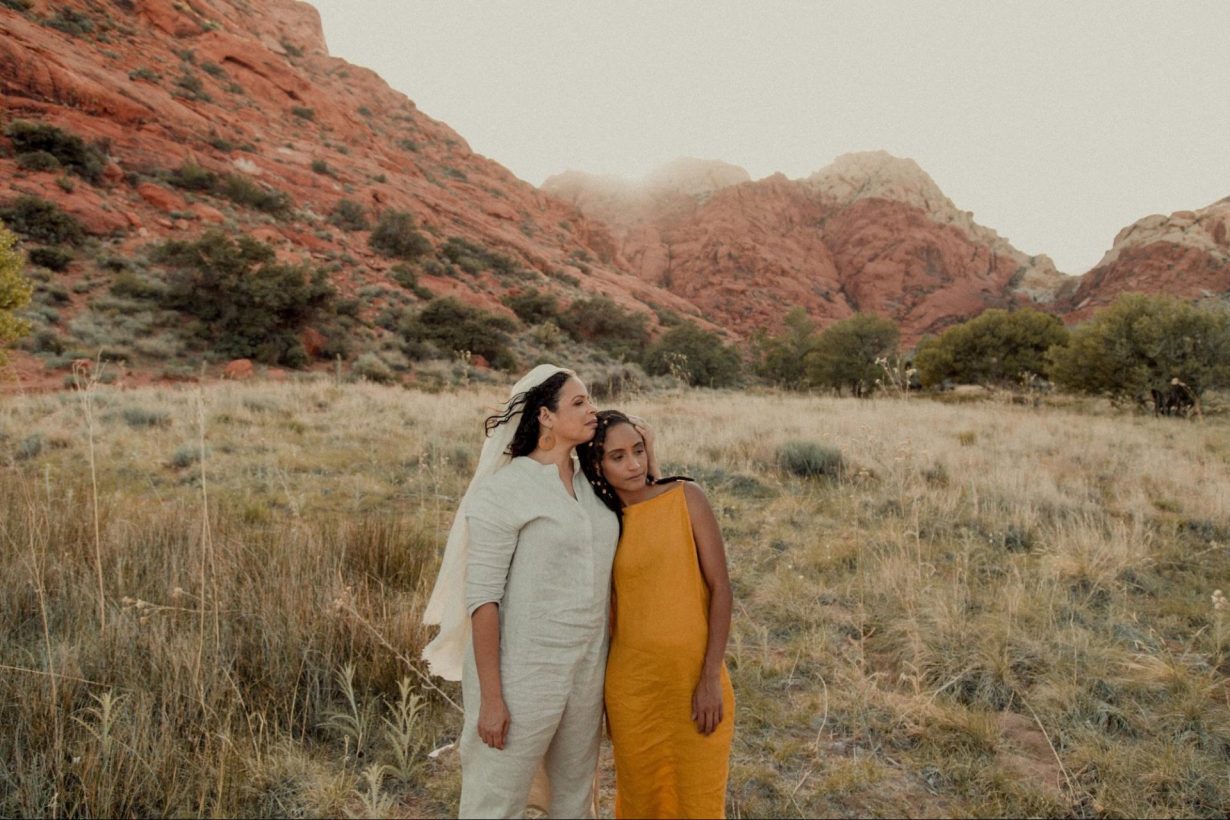 A 30-year-old Israelite woman named Adinah finds herself at the plains of Moab awaiting Moses’s final discourses before she enters the Promised Land.

The opening scene of Adinah (me) and her mom, Ima (Karen Ellis), is a flashback of a common occurrence between the mother and daughter.

Ima recalls God’s redemption of Israel out of Egypt through the Red Sea. Adinah asks her to sing the chorus that Miriam and the women sang on the beach. Ima lovingly obliges.

We then find Adinah waking up in a dreamy landscape recalling the creation story. Adinah recounts the history of her people all the way up to her current status just outside the Promised Land.

Suddenly, she is awakened by her husband, who informs her Moses is about to speak. This is when it becomes clear that Adinah’s whole poem was actually a dream.

I wanted the concept to be similar to (but less complicated than) Inception. The dream concept also allowed us creative license with our wardrobe.

Watching the Premiere at TGCW18

It’s difficult to describe all the emotions I felt as I sat between my husband and Karen Ellis at the premiere of our short film at TGCW18. Behind us were about 8,000 women watching a creative representation of God’s Word and work.

I held Karen’s hand on my left and Jon’s hand on my right. As the massive screen played our film, Jon kept looking at me with a huge smile. Karen cried. I had to keep reminding myself to take breaths.

Nancy Guthrie sat in front of us. It was such a delight to hear her shouting, “Ya! Uh! Yes!” throughout the film.

As soon as the film ended, Mary Willson began her beautiful exposition of Deuteronomy 1, titled “A Faithful God and His Unfaithful People.” Her vision for this opening night of the conference came to fruition, and it was one of the most precious moments of my life. 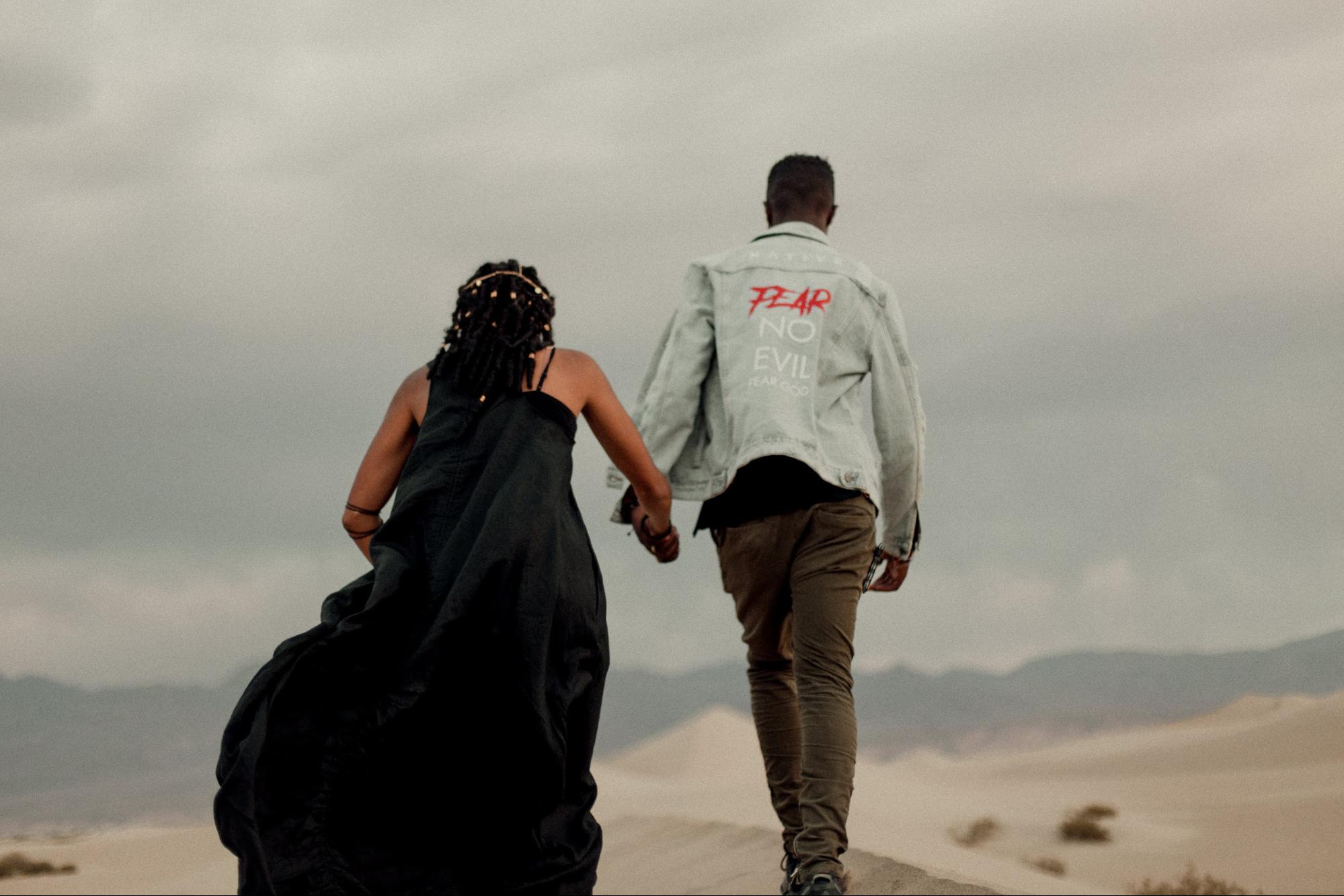 I have never taken on a creative project of this immensity. I know I couldn’t have accomplished it without the constant strengthening of the Lord. He deserves all the glory.

Thanks to my amazing, supportive, creative-genius-of-a-husband Jon, as well as the rest of my team: Juan, Haylee, Karen, and Alex. You made my vision come to life through countless hours of hard work! 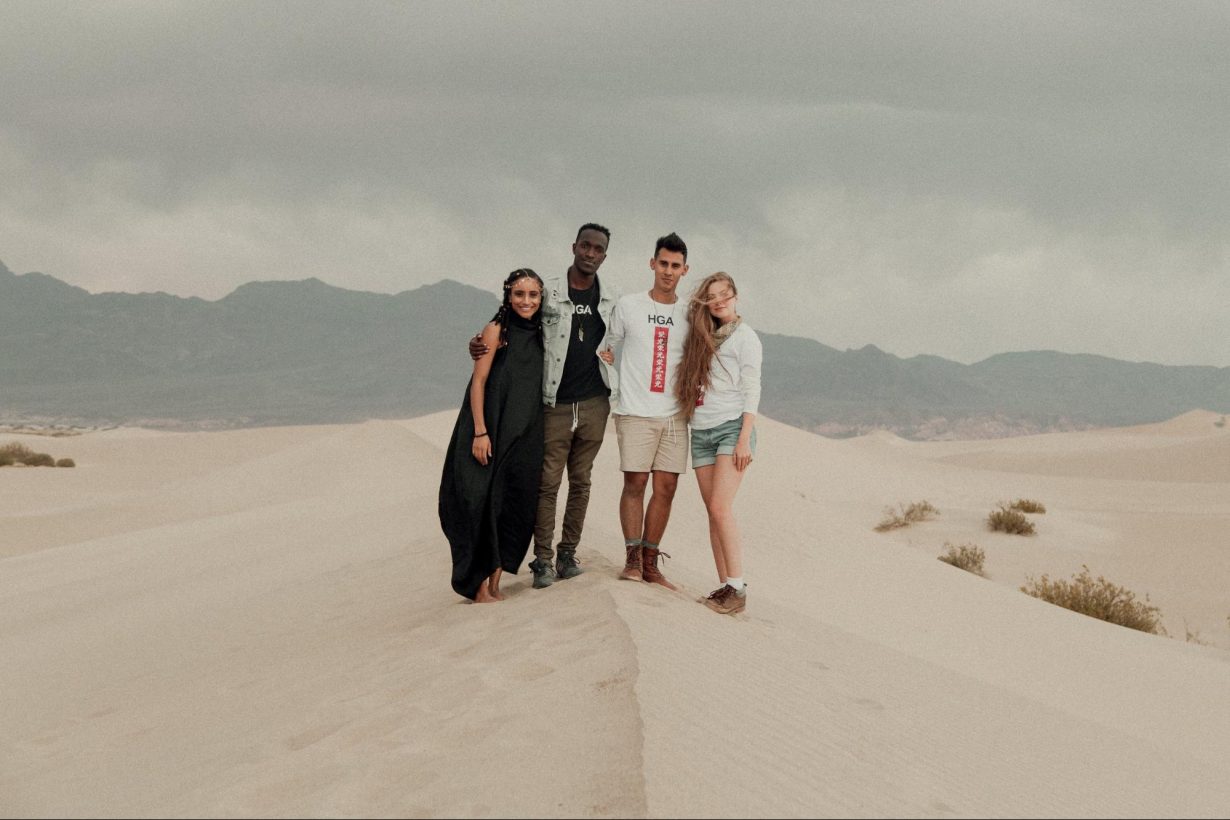 Thanks to my mom for taking care of our daughter as we traveled. Thanks to our singers Meeka, Bethsy, and Alethia, and to Derek who recorded my vocals. Thanks to Ann Westrate and Seth Magnuson from TGC.

Last, thank you to Mary Willson for your passion to give women of color a compelling voice in the body of Christ. You have no idea how empowering and humbling this whole experience has been for me.

Thank you for entrusting this project to me and encouraging me every step of the way. You are a shining example of gospel urgency, biblical literacy, and Christlike love.

Enjoy our “Listen & Live” spoken word short film below. May God stir your heart to live for him!

Quina Aragon is an assistant editor and administrative assistant for women’s initiatives for The Gospel Coalition. She’s also an author and spoken-word artist residing in Tampa, Florida, with her husband, Jon, and 5-year-old daughter. Jon and Quina are members of Living Faith Bible Fellowship. Her first children’s book, Love Made, poetically retells the story of creation through a Trinitarian lens of overflowing love. Its sequel, Love Gave, poetically retells the incarnation and good news of Jesus Christ through that same Trinitarian lens. Quina writes at her website QuinaAragon.com.