The first time I encountered Rachel Held Evans in person we were at a conference. For a few minutes, we were even in the same small room. It was a public restroom.

Later, in a much larger room, she gave a plenary address in which she began by acknowledging she had packed the wrong pants. Thinking she had grabbed her favorite black dress pants, she realized—only moments before going onstage—that she had instead brought a pair from the past, purchased for her slimmer self. And so she stood before an audience of thousands, visibly sucking in her stomach.

Those two encounters affirmed to me that Rachel Held Evans—a New York Times bestselling author and formidable internet presence—was human. I began to read her strident tweets and unapologetic blog posts recognizing that she might appear larger than life, but I knew the truth.

She used the bathroom. She gained weight. She packed the wrong pants.

Her new book, Wholehearted Faith, is equally real. In its pages, Held Evans makes progressive theological assertions and sarcastic disparagements of fundamentalism; she also acknowledges the debt she owes her evangelical parents and takes wistful backward glances at the spiritual certainty she once owned. The book’s 224 pages are alternately beautiful and scathing, bold and tentative, humorous and intensely serious. They reveal Held Evans as a complex person wrestling with real-life questions. 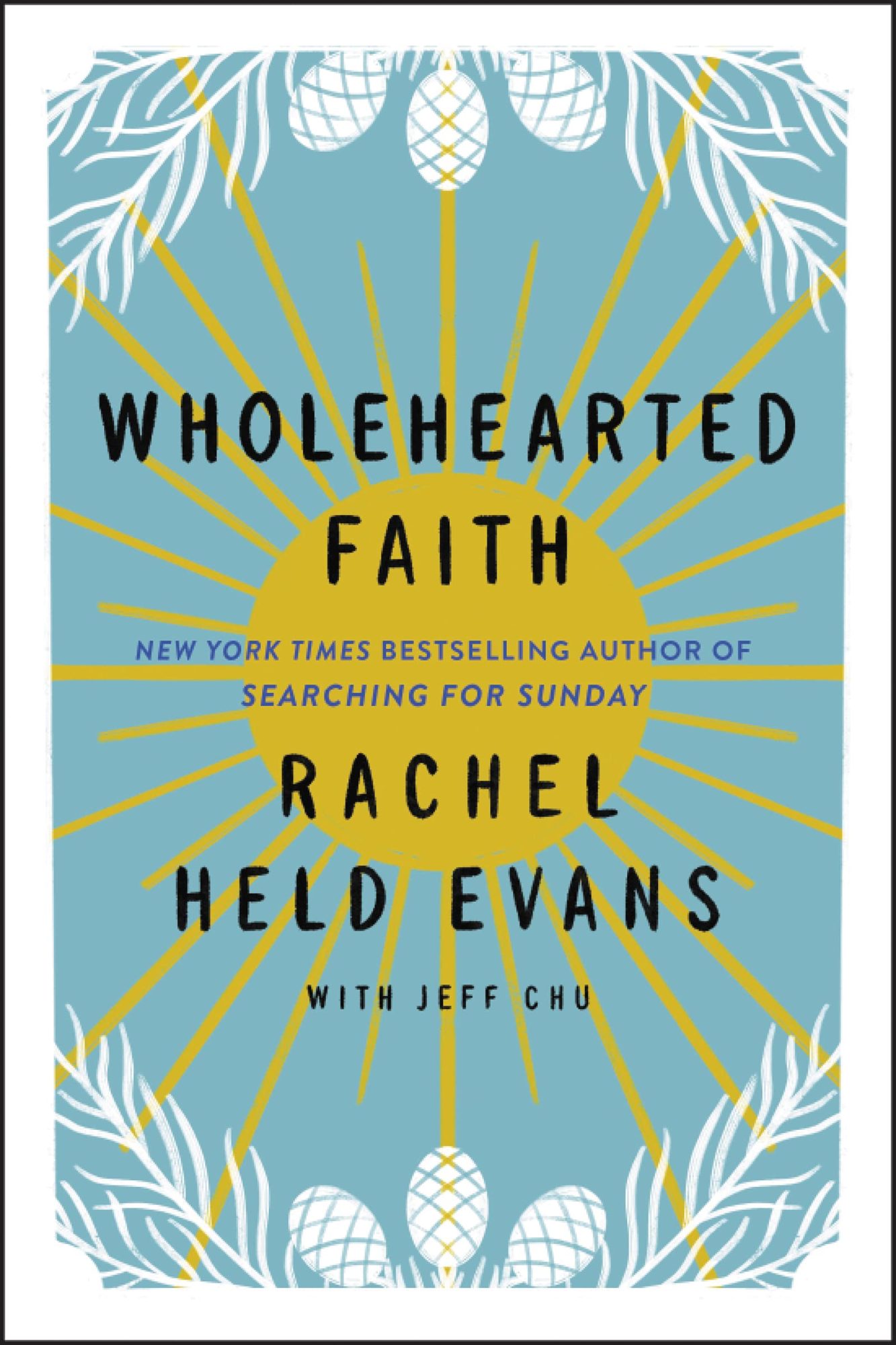 Essays from the Grave

Wholehearted Faith is a book Held Evans began in life, completing 11,000 words before she died suddenly, at age 37. It was finished by her friend Jeff Chu, who drew on her unpublished research, her tweets, her sermons, her blog posts, and their correspondence as he drafted the book’s 14 chapters. The result is what The New Yorker called “a touching and strangely disembodied series of essays.”

In Part One, “Wholehearted Faith,” Held Evans examines the nature of Christian faith and reflects on her experiences moving from the fundamentalism of her childhood to the progressive Episcopalianism of her final years. She challenges the idea that genuine faith “requires nothing less than absolute allegiance” (19), proposing instead that “faith teaches us to live without certainty and to hope without guarantee” (emphasis original, 22).

In Part Two, “Essays on the Christian Life,” Held Evans explores topics such as sin, atonement, baptism, the nature of Scripture, spiritual wandering, and Sabbath. These eight essays feel fragmented—an inevitability of their posthumous assembly, I’m sure—but they maintain the first section’s emphasis on the spiritual value of questioning what we think we know.

Primarily, Held Evans invites readers to be Christian without being conservative. She tells readers they can have it all: a rich spiritual life and unresolved doubt; an enduring community of faith and individual spiritual priorities; belief in what’s right and ever-evolving convictions; Jesus as example without Jesus as God.

Why Criticize the Dead?

It’s not a comfortable task to criticize the work of the dead. Especially when someone has died at a young age, suddenly, leaving behind small children and a grieving husband and dear friends and an unfinished manuscript, it seems unmannerly—cruel, even—to criticize.

But Held Evans in life was not someone who shied away from pushback and dialogue. She regularly engaged her ideological opponents on Twitter and in blog posts; she criticized and she received criticism and she gave it right back again. She explicitly says she wrote parts of Wholehearted Faith knowing some readers would take issue with her assertions, and she seeks to answer the objections she anticipated, even within the text of her book (96).

What’s more, the theological topics Held Evans writes about are of such importance—matters, truly, of life and death—that they deserve to be examined, discussed, and evaluated.

In one important thing, I agree with Held Evans. In contrast to the myriad voices urging disillusioned people to leave Christianity, she proposes something radical. She suggests that they could stay.

She comes alongside doubters, strugglers, victims, and sinners, and she invites them to give Christian faith a second chance. She admits that her reasons are not always especially compelling—“My most honest answer to the question ‘Why are you a Christian?’ is just ‘I don’t know. Why not?’ That might seem like a paltry and pale version of ‘Yes,’ but it is a yes nonetheless” (2–3)—but she opens the door to the possibility that a crisis of faith doesn’t mean you have to walk away from faith altogether.

I agree with Held Evans that leaving the faith isn’t the only option for a struggling Christian. I disagree with her assertion that adopting progressive theology is.

Theologically conservative Christianity is both intellectually rigorous and spiritually rich—providing help for doubters and a refuge for sufferers. Sincere questions about human origins, the problem of evil, the authority of the Scriptures, and the nature of Christ and his work have been asked and answered by thoughtful Christians through the centuries. In recent years alone, books like Before You Lose Your Faith and Confronting Christianity have welcomed questions about faith and have provided a counterpoint to the claim that the only home for authentic faith requires moving away from historic, orthodox Christianity.

This brings us to the vital question Wholehearted Faith’s readers must ask: Is Held Evans proposing an alternative path for Christian faith, or is she proposing a different faith altogether?

Held Evans herself doesn’t clearly define what she means by Christianity. Perhaps eschewing the fundamentalism of her past (a tradition that in the early 20th century elucidated the “fundamentals” of true faith), she writes things like: “I am a Christian, committed to practicing the way of Jesus, but in my heart, I still have so many questions, and I still have so many doubts” (3). For Held Evans, “practicing the way of Jesus” is an adequate summary of what it means to be a Christian. Jesus, by her reckoning, is a “leader” (92), a “first-century Palestinian rabbi” (19), someone who “made himself vulnerable” (63), and an example for us of love and faithfulness (90).

Elsewhere, Held Evans directly questions elements of Christian faith that orthodox believers would consider essential. About truth, she writes, “It’s not that I don’t believe absolute truth exists, but if it does, it would take the mind of God to know it in its fullness. I don’t think that absolute truth is sitting there in plain sight, waiting to be noticed” (51). The Bible, she explains, is neither clear nor plain, and if we insist it is, we fail to understand its nature as a text with “new life and new layers when it’s interpreted through the diverse lens of the many” (124).

Jesus is not merely an example of faith; he is the object of our faith.

About Christ’s work on the cross, Held Evans insists her “lack of clarity . . . about atonement theories” should “more charitably” be called “humility” (96). For her, it’s ok not to know what Christ accomplished when he died, why he died, or for whom he died. “Questions are as sacred as answers” (98), she demurs. But Christianity teaches that Christ died to save sinners from the justly deserved wrath of God (e.g., Isa. 53:1–6; 1 Pet. 3:18).

In the space of a review, it’s impossible to fully defend orthodox belief, but it’s valuable simply to note how far Held Evans’s views are from what historic Christianity has upheld as essential. In all of this, Held Evans declares that her beliefs are nonetheless consistent with the Christian faith. I don’t think they are.

In 1923, theologian J. Gresham Machen asked the same question of the progressive theology taking root in his day. In the introduction to Christianity and Liberalism, he observes: “Modern liberalism not only is a different religion from Christianity but belongs in a totally different class of religions” (6).

I closed the covers on Wholehearted Faith with a sense of deep sadness. I know that Held Evans was not alone in her questions. She was a real woman with real struggles of faith, and her words will resonate with many who are in the same position. She wrote beautifully and honestly about her experiences with faith, but she was ultimately unable to point herself or her readers to faith’s sure resting place: Jesus Christ, crucified for sinners. And apart from him, we have nothing at all.

Megan Hill is the managing editor for The Gospel Coalition. She is the author of five books: Patience: Waiting with Hope (P&R, 2021), Partners in the Gospel: 50 Meditations for Pastors’ and Elders’ Wives (P&R, 2021), A Place to Belong: Learning to Love the Local Church (Crossway, 2020), Contentment: Seeing God’s Goodness (P&R, 2018), and Praying Together: The Priority and Privilege of Prayer in Our Homes, Communities, and Churches (Crossway, 2016). She belongs to West Springfield Covenant Community Church (PCA), and she lives in Massachusetts with her husband and four children. You can follow her on Twitter or Instagram.