Among the books I’ve read this summer, two provide points of comparison with one another. The first was Journeys of Faith (Zondervan, 2012): four accounts of believers who have repositioned themselves in the Christian family. Two individuals have left evangelical Protestantism altogether for Orthodoxy and Roman Catholicism, a non-denominational evangelical has re-affiliated with evangelical Anglicanism, and a born-and-raised Roman Catholic has embraced non-denominational evangelicalism. That fascinating volume, edited by Robert Plummer, drew attention to upheaval within North American evangelicalism. On this continent, at least, it’s increasingly common for professing Christians to migrate from one faith expression to another. And the traffic moves in no single direction. Yet those who leave evangelicalism for other environs in particular readily detail the perceived shortcomings that propelled them on their way.

The second volume under review here, Why We Belong: Evangelical Unity and Denominational Diversity, provides by contrast a picture of relative stability within the expansive world of North American evangelicalism. The book does not deny evidences of ferment like the type highlighted by Journeys of Faith exist; it’s just that—like the Great Plains—the North American evangelical movement is vast. Reports of evangelicalism’s coming demise, then, are premature.

A different set of questions is being pondered in Why We Belong. The most obvious of these is the theological challenge posed by the coexistence of so many distinct expressions of evangelical Christianity. If such various expressions (be they Baptist or Presbyterian or Pentecostal) extensively agree about foundational matters (and steady appeal is made to David Bebbington’s “quadrilateral” of christocentricism, bibliocentrism, conversionism, and activism as evangelicalism’s characteristics), how can their separate existence be justified? This is the theological “problem” tackled by co-editor Christopher Morgan in the first chapter. In the second, Anthony Chute provides a thumbnail sketch of the evangelical history over the past half-millennium that has yielded the diversification we are seeing today. 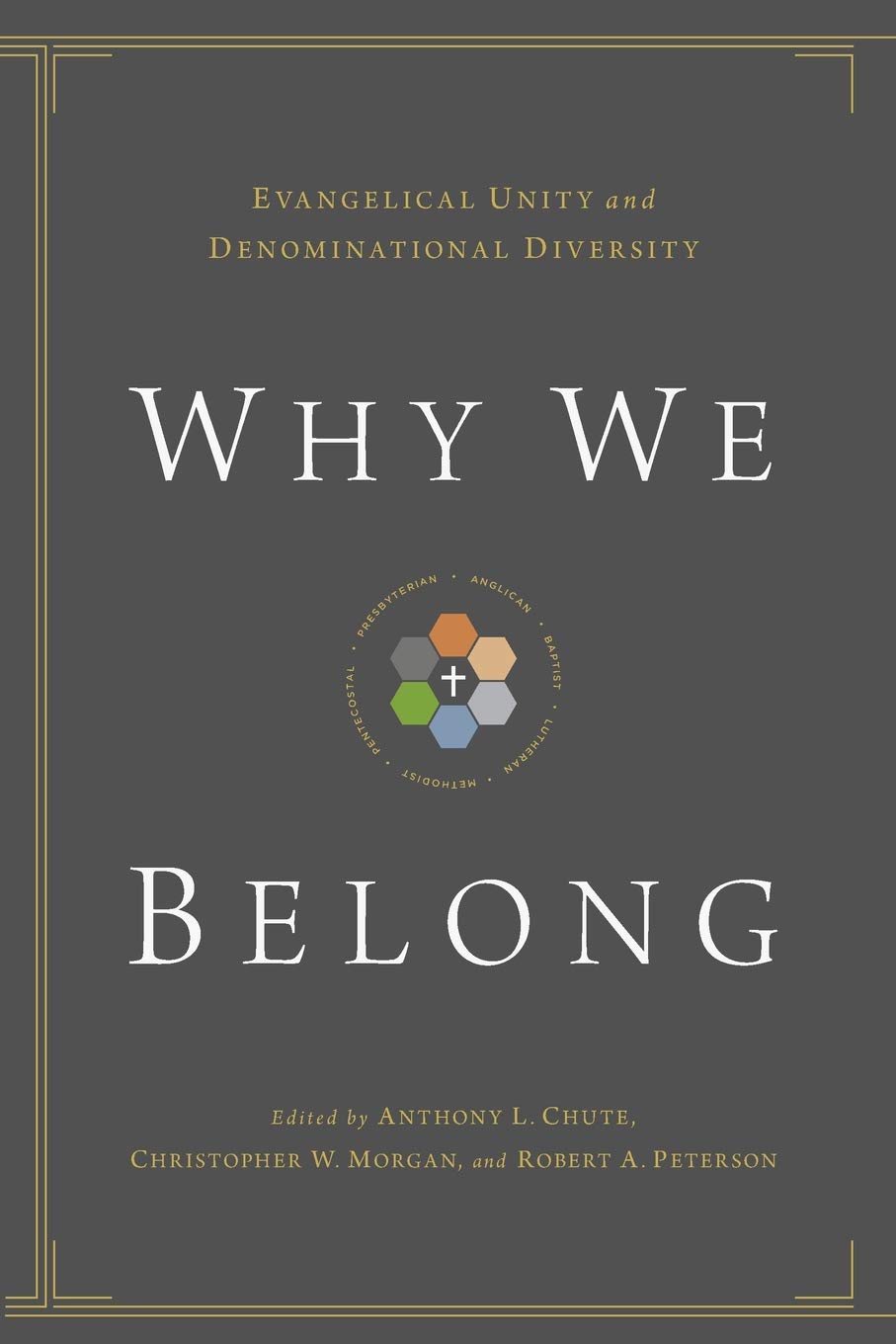 Why We Belong: Evangelical Unity and Denominational Diversity

Why We Belong: Evangelical Unity and Denominational Diversity

That said, the heart of Why We Belong is six subsequent chapters contributed by writers depicting their personal trajectories within distinct denominational constituencies. The range of constituencies represented here is wholesome and impressive. Within this set of six, let me draw attention to three subgroupings.

Two contributors, Gerald Bray and Timothy Tennent, write from “doctrinally comprehensive” denominations. These (the Church of England and the United Methodist Church, respectively) enfold many evangelical Christians within their ranks but are often ambivalent or dismissive toward the doctrinal, ethical, and missionary concerns common to the evangelical movement. Bray and Tennent make winsome cases for the viability of continued labor by evangelicals in their respective comprehensive settings. One of their strongest lines of reasoning pertains to how their historic denominations transmit from Christian antiquity the doctrinal and liturgical riches foundational to their way of being evangelical. The ongoing viability of evangelicalism in their settings is also buttressed by explicitly evangelical educational institutions that can augment the number of distinctively evangelical pastoral candidates.

On the other hand, we encounter two chapters from those who in adulthood have adopted a new evangelical tradition. Douglas Sweeney and Bryan Chapell were raised in Baptist settings but migrated into Lutheran and Presbyterian communions as an outworking of reflection engendered by theological studies. Interestingly, both have gravitated (by quite distinct means) to conservative expressions of their adoptive traditions. Like the Anglican and Methodist already named, Sweeney and Chapell retain enthusiastic loyalty to the cause of an evangelicalism more comprehensive than their own chosen expression of it.

The two final contributors were raised in and converted to Christ within expressions of evangelicalism that, though long-standing, aren’t typified by the term “historic denominations.” The Baptist narrative is provided by the well-known dean of Beeson Divinity School, Timothy George. Perhaps it might be said that of all the volume’s chapters, his most compellingly makes the case for an evangelicalism informed by the resources of the church of all ages. Just as intriguing (though for quite different reasons) is the contribution of Byron D. Klaus representing the perspective of one raised in the Assemblies of God. Klaus offers an insider perspective that demonstrates that the Pentecostalism emanating from Azusa Street, Los Angeles, in 1906 was self-consciously evangelical and persisted in this stance in the face of suspicion from North American conservative evangelicalism for most of its first half-century of existence.

Why We Belong closes with a far-seeing chapter by David Dockery regarding the challenges awaiting the attention of North American evangelicalism in the decades to come. Our culture is certainly not what it was when the National Association of Evangelicals was founded in 1942. Denominations seem steadily to count for less and “networks” for more.

I’m extremely grateful that this work has been published. It’s certainly one of the more constructive depictions of the variety and diversity in evangelicalism today. And though, on reflection, one could wish to have seen representations reflecting the substantive African American, Hispanic, and Asian component of evangelicalism, the range of diversity reflected is nonetheless remarkable. How many readers of this review have links with evangelical Christians as diverse as those included in this book? Why aren’t Methodists and Pentecostals (to name but two) better represented in our evangelical networking today? Why do our common evangelical affirmations not build off wider collaboration?