Today’s tectonic shift in sexual mores is not unrelated to matters of gender, as the popular acronym LGBT—lesbian, gay, bisexual and transgender—suggests. One could even argue that confusion about gender has helped facilitate this recent sea change in sexual ethics. It’s a great question of our day: what does it mean to be male and female?

This is why Mark Yarhouse’s new book, Understanding Gender Dysphoria: Navigating Transgender Issues in a Changing Culture, is not only timely but also necessary. It marks a step forward in Christian engagement with gender issues by grappling with the topic’s most contested area: gender identity. Yarhouse, professor of Christian thought in mental health practice at Regent University, defines gender identity as follows:

Gender identity concerns—or what we refer to as gender dysphoria—refers to experiences of gender identity in which a person’s psychological and emotional sense of themselves as female, for instance, does not match or align with their birth sex as male, or vice versa. (19, emphasis added)

What causes someone to feel female while having a male body, or male while female? How common is gender confusion? Can it be prevented or treated? Is cross-dressing or sex-reassignment surgery ever okay? What does a Christian response look like? In addressing these questions, Yarhouse draws from his professional experience and the latest scientific research to offer a biblically informed framework for understanding and engaging a complex topic.

Heart of the Book

The heart of Understanding Gender Dysphoria organizes around two themes: facts and framework.

“Dysphoria”—unease about something—is the technical term for gender confusion in mental health parlance. A psychologist himself, Yarhouse exposes us to the latest scientific research in chapters 3 to 5, in which he addresses questions of causation, phenomenology, prevalence, prevention, and treatment. Here it’s clear Yarhouse’s credentials make him uniquely capable to write this kind of book. 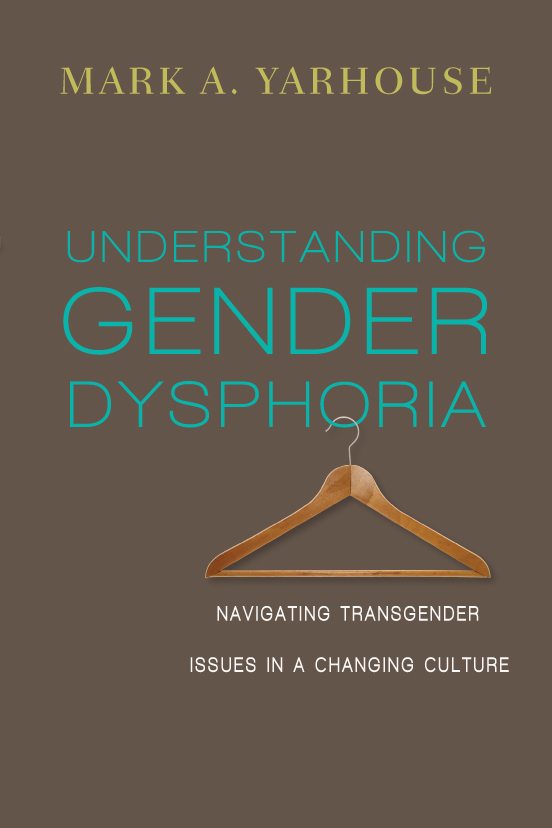 Parents will appreciate the analysis of childhood and adolescent treatment. And for those who can navigate phrases such as “the bed nucleus of the stria terminalis” (68), important facts emerge, such as:

How we engage this data is affected by the lens we’re looking through. Yarhouse constructs a lens, or framework, by first asking us to view gender dysphoria in light of the biblical storyline of creation, fall, redemption, and glorification. This is helpful since a robust understanding of the fall should make us less surprised by dysphoria, and less judgmental.

Also helpful is an engagement with alternative frameworks. Yarhouse considers the popular “diversity framework,” which sees “transgender issues . . . as something to be celebrated, honored, or revered” (50). Evangelicals are wary of this view. Without endorsing it, though, Yarhouse keenly observes that the diversity framework is popular because it addresses issues of identity, meaning, and acceptance, whereas Christian approaches, emphasizing the immutability of birth sex, can leave questions of identity and acceptance unanswered. Even the diversity framework has something to teach us.

The final chapters bring together the facts with this “integrated framework” in seeking a Christian response. The church must uphold the sacredness and integrity of created gender, but also offer compassion and hope. In general, this will look like an appreciation of the complexity of gender confusion, a relationally thick approach that walks alongside those suffering, and a form of management that encourages individuals to “resolve gender dysphoria in keeping with their birth sex” (137). For most pastors, connecting individuals with trained professionals is paramount.

Understanding Gender Dysphoria is about understanding gender dysphoria, not solving it, and in that sense, it succeeds. We will better appreciate the complexity of this topic, gain a framework for engagement, and practical ideas for response. Considering today’s culture, this is a topic Christians cannot ignore and should seek to become more informed about. Therefore, this book is a must-read.

Understanding Gender Dysphoria and its topic beg for further research and conversation in two areas: the theological and the pastoral.

Yarhouse’s biblical framework needs further development. In his treatment of Scripture, he passes over Paul’s use of “effeminate” (malakoi) in 1 Corinthians 6:9 too quickly. In trying to separate gender identity from issues of sexual orientation—an important distinction—we cannot miss that one reason the Bible prohibited homosexuality (and the surrounding culture frowned on it) was because it was, in fact, gender-shifting. One of the parties in the homosexual act was acting female while being male. A shifting in gender may also be behind Paul’s use of “contrary to nature” in Romans 1:26–27, as John Chrysostom (AD 347–407) suggests: “Not only are you [man] made into a woman, but you also cease to be a man” (Homilies on Romans 4.2.3). If a reason homosexuality was immoral related to the shifting of one’s gender, then perhaps we may draw the inference that other cases of gender shifting would also be immoral, such as cross-dressing and reassignment surgery.

Moreover, this entire discussion begs for further investigation into a biblical vision of masculinity and femininity. Gender confusion happens at the intersection of biology and sociology, or how one’s birth sex relates to how he or she lives in the world. Yarhouse alludes to the dangers of “rigid stereotypes about what it means to be male or female” that “inform gender roles that are difficult for some to live into” (133). However, he never describes what these are, nor does he offer alternatives. Literature abounds in this area, but more work needs to be done—work that speaks to what is essential to godly masculinity and femininity. Along this line, and worthy of further investigation, is the first known fact about gender: “in the image of God he created him; male and female he created them” (Gen. 1:27).

Recently, 500 people packed a middle school auditorium in Virginia as a local school board voted to approve adding “gender identity” to its non-discrimination policy, despite the vocal opposition of hundreds. I know this because my church is in this school district, and parents’ heads are spinning. What does this mean for students and parents?

People aren’t upset about this because they dismiss children confused about gender. Rather, parents are worried about the privacy of the other 99.7 percent of students that may find members of the opposite sex who identify as transgender sharing their bathrooms, showers, and locker rooms. What are the standards for “identifying” as transgender for a 13-year-old boy who asks to use the women’s locker room?

A young person’s identity—swarmed by hormones—is fragile and needs guidance, not more options. Yet Facebook’s diversity team recently found that their 58 gender options weren’t enough for users: “Now, if you do not identify with the pre-populated list of gender identities, you are able to add your own. As before, you can add up to 10 gender terms.” We will see increased confusion in the days ahead.

The church must have a pastoral response that includes space for conversation, climates of compassion, and teaching that brings clarity.

(1) Conversations: Our church is planning a night with parents in the coming weeks to discuss these issues. There will be a panel to facilitate discussion, and plenty of time for Q&A. In the year ahead we hope to offer regular evening sessions where speakers will teach on issues such as gender and sexuality with time for group discussion afterward. These conversations will be in the realm of 50 to 200 persons, so there is plenty of space for sharing.

(2) Climates of Compassion: Yarhouse suggests the need for churches with a “relational ethic.” In this diverse and pluralistic culture, the church must become more comfortable with guests in her midst who have very different perspectives on matters of sexuality. Conversions may happen in the course of months or years of relational life. There may be practical things churches can do that, while not celebrating non-biblical expressions of gender or sexuality, show compassion toward those exploring the faith. For example, Yarhouse shares the story of a transgender person who, when looking for a church, noted that “if there isn’t a family bathroom, things get complicated fast and you don’t go back” (158).

(3) Clarity of Teaching: There’s a clarion call to catechize our children toward godly manhood and womanhood. The culture is not merely neutral on this point, but antagonistic. Though this will look different for each church, it should have some basic elements including (1) an emphasis on the goodness and celebration of birth sex as part of one’s God-given eternal identity; (2) spaces to grow into gender identity with the help of a community that guards against stereotypes (e.g., boys should like sports and not dance) and instead instills essentials (e.g., boys should own sacrificial responsibility and resist passivity); and (3) the humility to admit that all of us living east of Eden have touches of dysphoria in one area or another but can find the path of sanctification in Jesus.

There’s so much more to be said, but for now we can thank Yarhouse for making this important step in Christian engagement on the issue of gender and moving the conversation along.