Wesley Hill is assistant professor of biblical studies at Trinity School for Ministry in Ambridge, Pennsylvania. Many will be familiar with his first book, Washed And Waiting: Reflections on Christian Faithfulness and Homosexuality (Zondervan, 2010), about his coming to terms with being (to use his terminology) a “celibate gay Christian.” Hill’s new book, Spiritual Friendship: Finding Love in the Church as a Celibate Gay Christian, charts how life has been in the intervening years, focusing on what’s become a prominent theme for him as he’s sought to find appropriate emotional intimacy as a single man with homosexual feelings: friendship. “Friendship,” he writes, “is a good and godly love in its own right, just as worthy of attention, nurture, and respect as any other form of Christian affection.”

Spiritual Friendship comes in two parts. The first examines where we are on friendship today, where Christian tradition has been in the past, and where the Bible would point us in terms of the importance of friendship. Part two is a call to revive the lost art of friendship, particularly the all-but-forgotten tradition of “spiritual friendship” in which two persons of the same sex make formal commitments and vows to one another. Hill ends with some pointers on how we can work to cultivate friendships more generally within our churches.

Those familiar with Hill’s first book will recognize many of its hallmarks here. He writes with insightful cultural analysis, biblical attentiveness, and, at times, gut-wrenching honesty about some of his more painful experiences.

There is a lot to commend in Spiritual Friendship. Particularly sobering is Hill’s analysis of the demise of friendship in modern Western society. He pins down some of the reasons for this (drawing on the work of Benjamin Myers): a Freudian suspicion that all relationships are ultimately motivated by erotic attraction; the elevation of marriage and the nuclear family as the most significant forms of human relationship (often to the exclusion of friendship); and the belief that being less relationally entangled will bring us greater freedom and happiness. This is a hugely insightful section, and should be of particular concern to those in church leadership. As we trace this cultural demise it becomes apparent just how much the evangelical world has drifted along with it. Even in churches, friendship isn’t what it used to be—or needs to be. 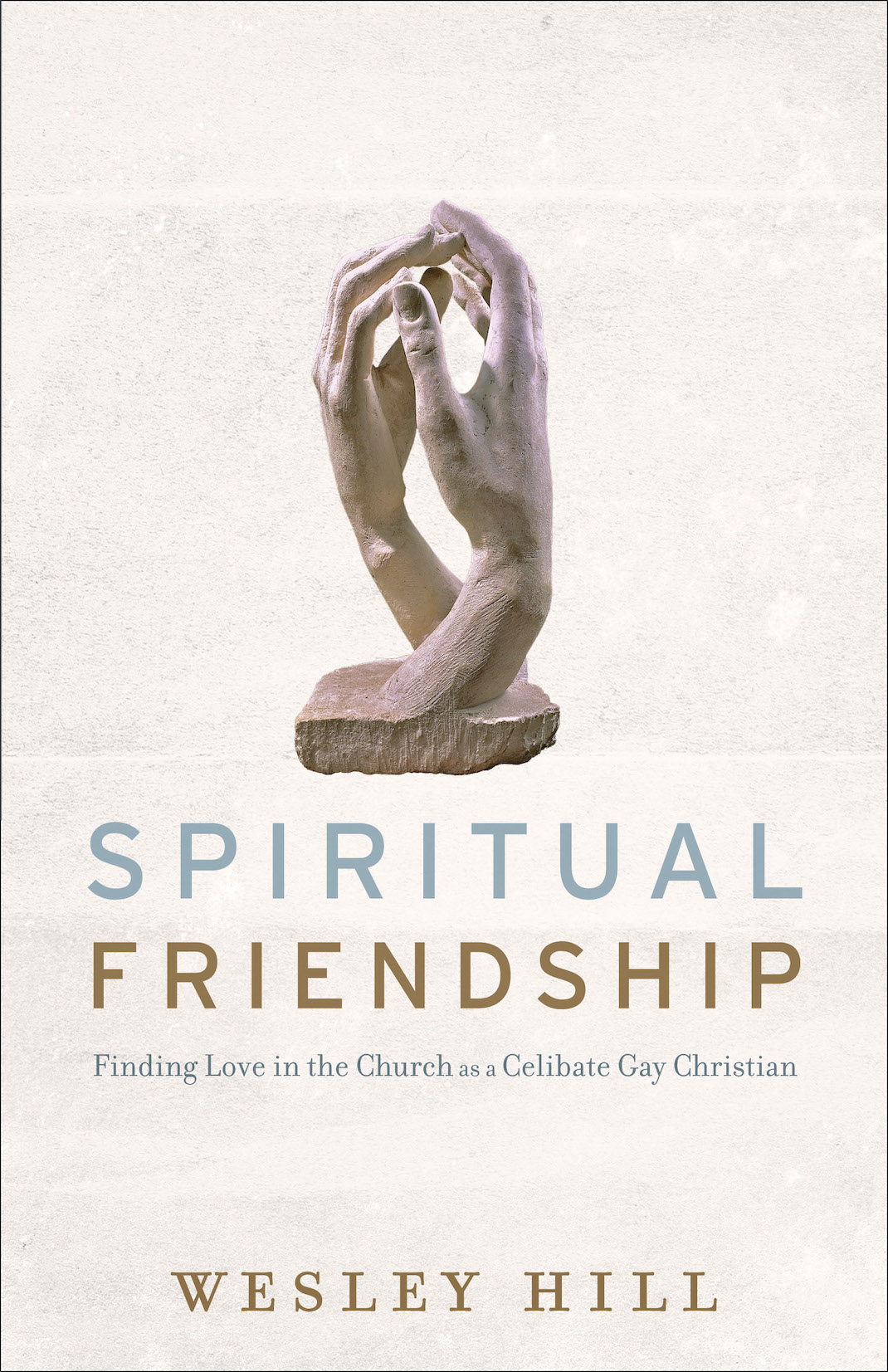 Spiritual Friendship: Finding Love in the Church as a Celibate Gay Christian

Spiritual Friendship: Finding Love in the Church as a Celibate Gay Christian

All of which raises the question: how are long-term celibates (like Hill) to find necessary intimacy in a society and church that has significantly downgraded friendship? At one point he writes:

What I and others like me are yearning for isn’t just a weekly night out or circle of people with whom to go on vacation. We need something more. (42)

Voices like this don’t just come from the same-sex attracted among us; far too many churches are places of searing and unremitting loneliness. This is a discussion we need to have, and Hill’s analysis will help us with it.

There are a couple of minor criticisms I have of Spiritual Friendship, and one significant concern. First, the way Hill so powerfully frames his discussion in his own experience of same-sex attraction risks alienating those who don’t identify with his particular situation. Though the subtitle makes this backdrop clear, it means the book is in danger of being neither one thing nor the other—not quite a book on friendship and not quite a book on same-sex attraction—which is a shame since the whole church would profit from reading what he says about the importance of friendship.

Second, reading Jonathan and David’s relationship as a blueprint for close friendship between two men makes me nervous. David and Jonathan were not two regular Joes. David was chosen and anointed by God to be king. He was, at this point in salvation history, the prototypical Christ. With this in mind, I’m not sure that Jonathan’s covenant with David, and David’s superlative delight in Jonathan’s love, is as much about male friendship as it is about how God’s people and God’s king relate to one another. Jonathan models the way we are to pledge ourselves above all others to God’s king, and David anticipates the utter delight Christ has in those who love him. This is not to say we have nothing to learn about male friendship from David and Jonathan, nor that intimate male friendships are not needed, but we need to keep these important biblical-theological caveats in place before considering what their friendship might teach us.

However, the key issue and my greatest concern is what this “something more” Hill calls for should properly be. He exhorts us to reconsider the place of covenanted friendships in the life of the church. No one can deny what earlier Christian generations can teach us about friendship. Nor can we deny that a lack of commitment drives so much of our contemporary loneliness. But it seems to me that resurrecting “vowed” friendships will only add to the current confusion about friendship. It’s hard to imagine such friendships not being confused with sexual partnerships. We also need to be mindful of the potential danger, particularly for two friends with same-sex attraction, of fostering unhealthy intimacy and of emotional over-dependency. One of the heartbreaking episodes recounted in chapter five suggests at least something of this. Hill anticipates these concerns but does not allay them for me.

I think there is also a significant category confusion. Making a close friendship covenantal takes it from a familial setting to something more approximate to a marital one. But whereas marriage is necessarily (at least in Christian thinking) limited exclusively only to one, close friendship is not. We have the capacity for—and it may be healthier to cultivate—close friendship with a small number. This is not the case with marriage. A covenant may not be the best vehicle for the commitment we need, and yet are so often lacking, in friendships today.

Though I’m not convinced by this particular direction of Hill’s, I do want to honor his intentions behind it. Many will no doubt raise the concerns I’ve mentioned above. But if one danger is cultivating what might be an inappropriate kind of friendship, another (and perhaps greater) danger is that we do nothing at all. Hill has identified what is an appalling deficit of friendship in many of our churches. It strikes me how few are giving the issue of widespread loneliness serious practical attention. Hill is right that we need to think imaginatively, and at least he’s thinking of something. His critics might do well to consider D. L. Moody’s reputed response to those who took a dim view of his evangelistic missions: “I prefer my way of doing it to your way of not doing it.” Inasmuch as I think Hill is wrong, I think—if I can put it this way—that he’s wrong in the right kind of way.

Conservative Christians who do not affirm homosexual partnerships are increasingly accused of sentencing LGBT individuals to a “life without love.” Such an accusation assumes that love is not really to be found outside of a sexual or romantic relationship. We are right to take issue with this. Jesus himself lived without sex, but did not live without human intimacy. He had an inner circle of close friendship—John, in particular, is described as “the disciple whom Jesus loved” (John 13:23). To say a life without sex is a life without intimacy is to fundamentally misunderstand how God has created us to live and flourish. But we need to be able to demonstrate this conviction in the life of our churches. Too often, I fear, the “life without love” charge has some practical truth to it. Our churches are often not places where single people can enjoy deep love and community.

So what is the way forward? We need to champion friendship. Not the meaningless, verbified, Facebook kind but the biblical, peculiarly Christian kind. We need to encourage, provide, model and teach deep biblical friendship. I suspect we will not see great fruitfulness from our witness on the issue of sexuality until we do. Gospel truth needs to be backed up by gospel living, a countercultural message by a countercultural community.

It’s hard to avoid the importance of close friendship within the Bible. Proverbs celebrates the wisdom that comes from those who know our souls and are committed to us for the long haul (Prov. 18:24; 27:9). Such concepts are increasingly alien today. We need to recover the forgotten art of friendship for the sake of singles feeling unbearably isolated and for the sake of marriages that have become unhealthily self-absorbed. Spiritual Friendship doesn’t have all the right answers, but its greatest value may be that it helps us start asking some of the right questions.