This revised Durham dissertation (2008, under R. W. L. Moberly), Reading Joshua as Christian Scripture, is an excellent example of the recent (re)turn to “theological interpretation.” Earl advances a complex interpretation of Joshua designed to enable one to read that book theologically despite the historical and ethical problems that he sees in it; he accepts as uncontroverted fact that Jericho’s fall occurred centuries before the late Bronze Age date the OT seems to require (2) and describes the conquest as “bloody genocide and xenophobia” (47).

Earl’s proposal begins with the suggestion that Joshua should or could be read as myth (on terms much like those suggested by W. G. Doty), which transmits “cultural memory” (for this Earl draws on the work of Jan Assmann in particular). This view of “myth” is then merged with P. Ricoeur’s theory of symbol, in which “history” and “fiction” can both be “true” within the respective bounds of their intention. Since he finds the historical-critical and ethical problems in Joshua insurmountable, Earl chooses to apply Ricoeur’s concept of fiction to Joshua.

Accordingly, the book of Joshua usefully “redescribes” reality without being history (i.e., historiography): it is “history-like” (33). “The issue at stake with regard to the biblical narratives is thus not that of historical veracity, but of whether, and how, they paint a good, fitting or faithful (even if imperfect) image of ‘the Kingdom of God’” (31). Earl follows this conclusion by affirming Karl Barth’s removal of historical referentiality from (biblical) revelation and affirms that this type of revelation can occur even if a text that purports to give a historically referential account does not actually do so (211; cf. also 49, 61). If a given text is revelatory in this sense, the reader decides (in light of his or her “contemporary context” and the text’s “tradition of reception”) how its message “would be reflected in terms of concrete expressions or enactments of actual human practice and behaviour” (61–62). 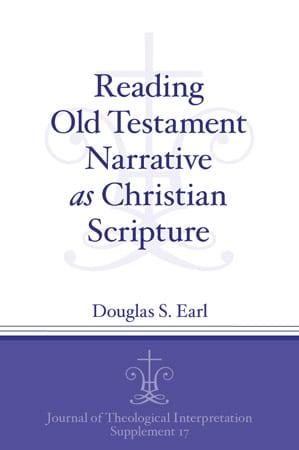 The book of Joshua has been received and used as Christian Scripture throughout Christian history. The challenge today, however, is how Christians should appropriately continue to read Joshua as Scripture, not least in the light of well-known historical and ethical difficulties with the narrative. In Reading Joshua as Christian Scripture, Douglas Earl draws on conceptual resources offered by recent anthropological approaches to myth and combines this with a close literary reading of the text, in order to argue that Joshua is misconstrued when it is treated as a historical account of conquest.

Using this method, Earl concludes that the conquest-language in Joshua is mythic, and that “whilst reinforcing many aspects of Israelite identity . . . Joshua simultaneously challenges accepted views of what it is that constitutes Israelite identity” (202). He shows acute theological sensitivity in drawing out ways in which this and other elements in Joshua might function theologically.

It cannot be said that Earl set an easy task for himself or that he has developed facile solutions to the challenges posed by the book of Joshua. His engagement with a wide spectrum of literature (Christian and Jewish interpretations of Scripture, myth theory, and hermeneutics in particular) makes for stimulating and challenging reading. Though not germane to this review, the book also includes a judicious evaluation of text-critical questions in Joshua and of its tradition-historical interpretation as well as some 70 pages of illuminating theological interpretation of Joshua’s 24 chapters.

In the spirit of constructive critique, several aspects of Earl’s approach would benefit from further development. First, it is extremely important how the rules of one’s “language-game” are established, and Earl makes two decisions that impact his treatment in profound ways. Beginning with the question of whether a given biblical text should be taken literally or symbolically, Earl argues (very briefly) that although the book of Joshua shares significant traits with other ancient conquest accounts, several points of difference mean it is not to be classified as such, but is, rather, myth: the fall of Jericho is unique; the command to destroy Jericho as something consecrated to Yahweh (herem) is very rare in extra-biblical accounts, which moreover use the first-person (Neo-Assyria) and focus on destruction of immaterial objects (Hittite); and chapters 12–24 do not fit the genre. It is certainly not impossible to critique these objections (cf. especially K. L. Younger Jr., Ancient Conquest Accounts: A Study in Ancient Near Eastern and Biblical History Writing [JSOTSup 98; Sheffield: Sheffield Academic, 1990]), but even if Earl were right, his conclusion that since Joshua (or parts of it) is not a typical ancient conquest account it is therefore myth is a non sequitur.

Second, it could be asked if it is possible on Earl’s view to write a historiographic text that is not essentially mythic. Earl sees all texts as containing some of both, so that at least some of any historiographic text must be understood non-referentially. This is a far-reaching theoretical commitment and does not seem a promising hermeneutic for genres otherwise recognized as prioritizing (not exclusively) historical referentiality.

The “language-game” is also important at a canonical and epistemological level. With hundreds of references to Christian (and occasionally Jewish) interpretations of Joshua but no discussion of how the rest of the canon (especially the NT) views the ethics of biblical interpretation, Earl’s decisions to make Barth’s doctrine of revelation the sine qua non of his interpretation and to limit the text’s use by the community’s pragmatic judgment of both its revelatory status and “fittingness” make the interpreter nearly autonomous and push aside authorial intent (53, 233).

Had Earl given more weight to the canon’s explicit and implicit hermeneutics, the picture might have looked quite different. Simple points like the acceptance by the rest of the OT of the conquest’s historical character (Earl makes the “promise” of Deut 7:1–26 of no historical significance by labeling it “a later retrojection,” 108), as well as more significant issues like the christocentric nature of the NT’s use of the OT, drive interpretations of Joshua in directions sometimes different than that followed by Earl. The author’s brief engagement with the salvation-history approach, and his conclusion that it “is really a ‘new myth’ of existential significance” (210), will make some readers wonder if he has fully grasped the significance of historical referentiality for a whole-Bible theology. It is especially surprising at this point that evangelical “biblical theology” is completely absent from his discussion and bibliography.

Despite its sophistication, this theological interpretation of Joshua does not fully succeed in resolving the tension between the sense of the text as a whole (with the historical referentiality and theological voice that inhere in it) and historical or ethical criticisms that seek to fragment it. The canonical approach of Brevard Childs, developed in the 1970s for the identical purpose of maintaining the validity of historical-critical findings while establishing grounds other than the text’s historical veracity for its theological claims, left many uncertain that the two had been successfully wedded, and the same question can be asked of Earl’s work. While on the one hand problems raised by historical-critical treatments of Joshua prevent him from reading Joshua as something other than myth, on the other hand Earl rejects Vanhoozer’s critique of Ricoeur (to the effect that historical veracity is indeed an important epistemological warrant) by saying that “appealing to history in this way reflects a mythical perception of reality rampant in modernity, but it is an epistemology that is simply not available” (57). Earl has used history to identify problems in Joshua, but has summarily excluded it from his formulation of a solution, and he provides no justification for this decision. This methodological and epistemological inconsistency needs to be resolved before Earl’s interpretation of Joshua can be said to have carried the day.