While most would agree that sin is a major theme in the OT, only a few have explored its nuances there book-by-book. The present volume, A Severe Mercy: Sin and Its Remedy in the Old Testament, does just this (only Ruth, Esther, Ecclesiastes and Song of Songs are not treated) while showing how each composition constitutes parts of a larger, coherent whole.

Boda’s approach is “canonical-thematic,” and he identifies the “hermeneutical foundations” of his work with Brevard Childs’s call for a theologically focused interpretation of individual books in their canonical form and order (4–5). At the same time, Boda’s adaption of the “canonical” method is much more congenial to a divine author than was Childs’s, which located authority in the community that transmitted the text. Consequently, Boda not only eschews an interpretative approach that focuses on the historical development of the text (e.g., the various sources purportedly present in the Pentateuch), but also preserves Scripture’s revelatory nature by stressing that it is “normative” (5).

Boda’s method gives some attention to where a biblical book is located in the most common Hebrew order of the books (in which, notably, the so-called wisdom literature is grouped with Daniel, Ruth, and other books in the third and final section that ends with Chronicles), though like most who do so he does not explain how canonical order functions hermeneutically (7–10). Perhaps this is because he does not make as much as some other theologians of this element in his interpretation.

At the level of textual interpretation, Boda traces the theme of sin across the OT not simply by following words like “transgression,” “iniquity,” and the like, but by attending to “lexical, linguistic, and conceptual frameworks,” some of which may not employ the usual vocabulary of sin. He suggests in a preliminary definition that sin is “an offense against a divinely ordered norm” (11). Within that definition, of course, there are important nuances. Brief overviews of how Boda treats different books are the best way, within the constraints of this review, to see these nuances (and the value of his work).

Beginning in Leviticus, the “priestly conception of sin differs radically from the other major canonical traditions (prophetic, wisdom, deuteronomic)” because its orientation is dominated by the presence of God among his people (51; Boda devotes two sizable chapters to Leviticus). Boda divides the spectrum of proximity to God into three graded zones of holy, clean, and unclean (51; cf. Lev 10:10–11; clean and unclean are not opposites but two kinds of non-holiness on his view). The priestly view of sin also recognizes polarities like ritual-moral, commission-omission, and inadvertence-defiance in terms of the action itself. The consequences of sin are likewise diverse, including “punishment, death and destruction” in some cases and “ritual, sacrifice, and reparation” in others (52–60). 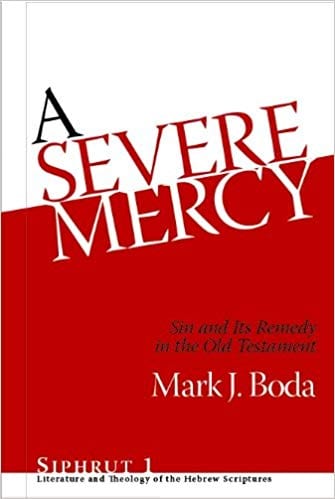 The biblical-theological approach Boda takes in this work is canonical-thematic, tracing the presentation of the theology of sin and its remedy in the canonical form and shape of the Old Testament. The hermeneutical foundations for this enterprise have been laid by others in past decades, especially by Brevard Childs in his groundbreaking work. But A Severe Mercy also reflects recent approaches to integrating biblical understanding with other methodologies in addition to Childs’s. Thus, it enters the imaginative space of the ancient canon of the Old Testament in order to highlight the “word views” and “literary shapes” of the “texts taken individually and as a whole collection.”

Leviticus builds on the knowledge that sin’s remedy will come through the line of Shem (Genesis), whose descendants form a nation in covenant with Yahweh (Exodus), by exhorting “the people of Israel to respond by consecrating themselves and so to make Israel a place free from the impurity and sin that would threaten the enduring presence of Yahweh in their midst and on earth” (116). Deuteronomy subsequently stresses that this response has to be genuine, but does not resolve the emerging tension between Israel’s calling and her apparent inability to fulfill it.

Now to another genre and another era. In the eighth-century prophet Amos, Boda sees “human response and divine discipline as ways of remedying sin” (310; cf. Amos 4:4–5:7). Summoned to “meet their God,” Israelites must repent, and Amos himself introduces a tension between (superficial) cultic observance and authentic fidelity to God: “The people’s ‘seeking’ of God through sacrifices and tithes . . .  is inappropriate in light of their present behavior, which is described. .. as injustice against the poor” (312). The “outcome of [true] repentance is nothing short of ‘life’ . . . in Yahweh’s gracious presence (5:14) rather than ‘death’ . . . from Yahweh’s terrible presence” (312). In common parlance, the “Day of the Lord” thus brings the destruction of sinners and the purification and restoration of “Israel,” though Boda’s treatment of Amos 9 is quite short.

A last example, this one from the wisdom literature: Proverbs sets sin over against its opposite through the contrast of the two ways of wisdom and folly. “The rewards and punishments associated with these two ways suggest a theology of retribution in which righteous wisdom is blessed and wicked folly is cursed,” though Boda is careful to note that this retribution is neither impersonal nor automatic (373–74). Sacrifice is almost absent from Proverbs, underlining the importance of heart-obedience for God’s people (374–75), something Israelite wisdom literature calls “the fear of the Lord.”

Boda concludes his extensive study by explaining the variety in the OT’s perspectives on sin and its remedy in light of the complexity of the divine character (522, cf. Exod 34:6–7), especially divine justice and grace. Sin’s remedy often involves divine grace, a mediator, and the (especially eschatological) transformation of sinful people, which enables a deepening of the repentance that the OT consistently urges upon Israel (520–23).

Readers should be grateful to Boda not only for treating this prominent biblical theme thoroughly, but also for doing so in a way that respects the integral features of each book. While this makes the tasks of integrating and systematizing the biblical testimony regarding sin more challenging, it simultaneously equips one to do so in a way that honors the rich diversity of Scripture.