Surely you’ve heard this exchange (or been a part of it yourself):

Christian: But that’s the thing. It’s not supposed to be reasonable. You have to take it all on faith!

Both the skeptic and the Christian are mistaken. Faith is more than mere intellectual assent, but it’s not less. If a Christian thinks his faith is supposed to be unreasonable, then he doesn’t understand what he’s saying. The doctrine of atonement isn’t put forward as a spontaneous overflow of powerful feeling, but as the clear teaching of Scripture. But the skeptic isn’t right, either. Christianity is the worship of the one true God, and the faith is reasonable not because some subset of human inquiry has declared it to be true but because God is himself supremely reasonable.

Many Christians should think more carefully about the relationship between faith and reason. When we exercise our reason, we sharpen and clarify our beliefs. The Westminster Confession of Faith, for example, talks about deducing beliefs “by good and necessary consequence” from what is explicitly stated in Scripture. That’s not the language of emotion but the language of logic.

Christian theology’s embrace of faith and reason delivers an unexpected gift to the world. In Reason, Faith, and the Struggle for Western Civilization, Samuel Gregg explains how this right understanding of the relationship between faith and reason generates recognizably Western ideas, commitments, and institutions. 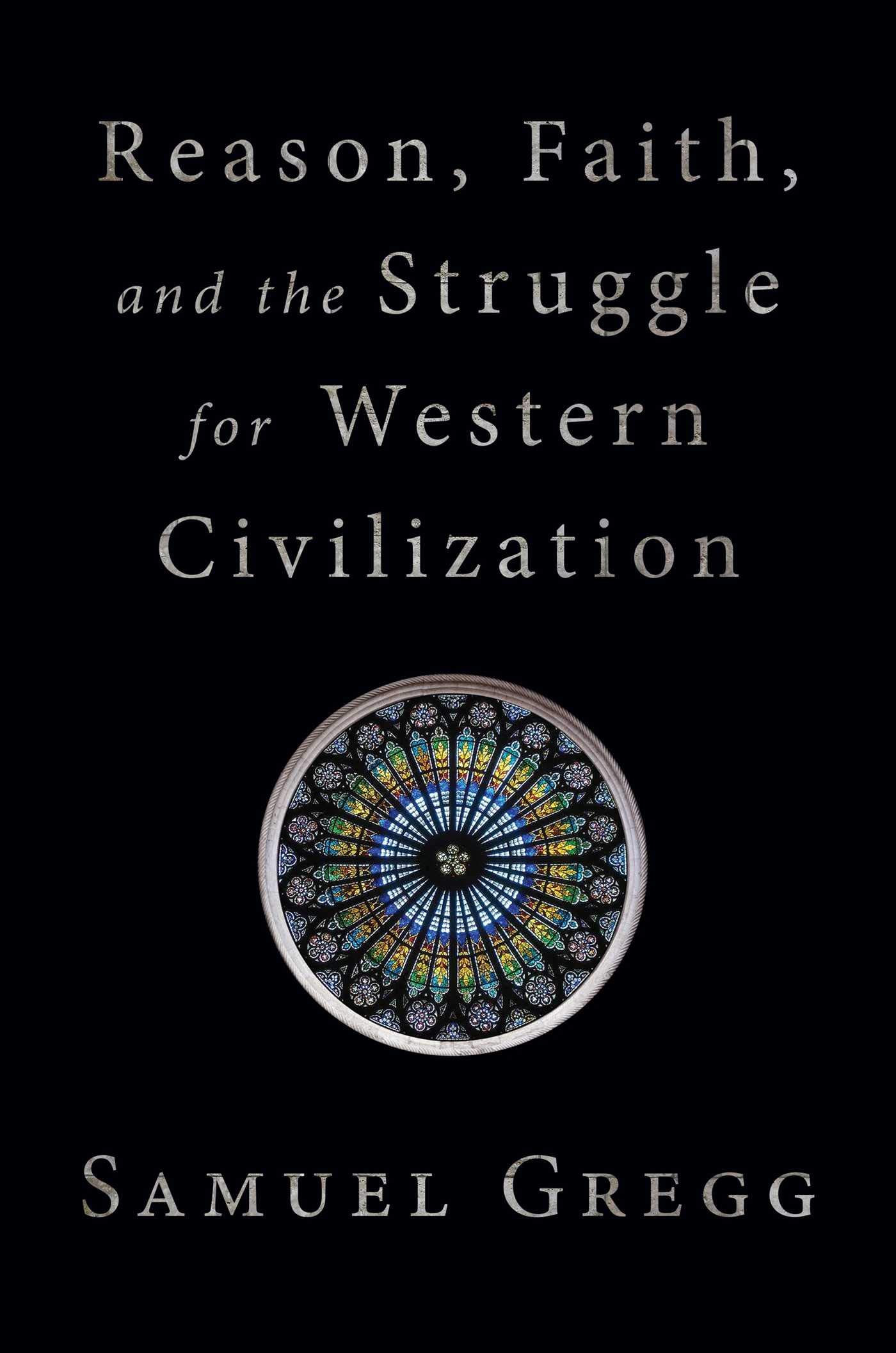 Reason, Faith, and the Struggle for Western Civilization

Reason, Faith, and the Struggle for Western Civilization

We can all see that faith without reason is benighted at best, fanatical and violent at worst. But too many forget that reason, stripped of faith, is subject to its own pathologies. A supposedly autonomous reason easily sinks into fanaticism, stifling dissent as bigoted and irrational and devouring the humane civilization fostered by the integration of reason and faith. The blood-soaked history of the 20th century attests to the totalitarian forces unleashed by corrupted reason.

Making of the Cultural West

Gregg, who is from Australia and now research director at the Acton Institute in Grand Rapids, Michigan, makes clear that the West isn’t, for him, a term of geography but of art—quite literally, of cultural accomplishments—and history. The West represents certain fundamental ideas; it’s not a mark indicating country of origin. Japan and the Ottoman Empire show that modernization isn’t the same thing as “Westernization.” Fascism and Marxism both come from the geographic West but are self-consciously anti-Western.

The West evidences “a suspicion of superstition, mistrust of arbitrary power, a desire to avoid error, a conviction that communities should be just, and a concern for freedom.” Wherever Christianity goes, belief in creation, freedom, justice, and faith go, too. Because God is reasonable and free, and we creatures are made in his image, then the world should be intelligible to us, too. We can—and should—seek and find truths about the world.

Wherever Christianity goes, belief in creation, freedom, justice, and faith go, too.

That’s the bright side. But there’s a dark side, too. Mistaken conceptions of the relationship between faith and reason undermine the blessings of liberty.

But, first, an objection: talk of faith and reason sounds too much like Greek philosophy and not enough like Christian theology. Such a claim, Gregg argues, simply gets the history wrong. Though not wanting to undermine ancient philosophical accomplishments, Gregg makes the compelling case that Christianity resolved a tension within Greek and Roman culture. The pagan religion of many gods with conflicting moral codes couldn’t withstand the careful philosophical analysis of the best ancient philosophers.

This fundamental inconsistency between Greek and Roman religious myths and the philosophy of reason created an opportunity for early theologians to show the rational excellence of the Christian faith. Justin Martyr criticized the irrationality of pagan religion. Clement of Alexandria praised Christianity as the true philosophy. An early pagan critic mocked Christians as “the high priests of truth,” showing by his sneering how devoted to the truth Christians were—and are.

This understanding of faith and reason flowers into Western civilization. We must take them together. Trying to have one without the other is no good. Faith without reason brings jihad; substituting warm feelings for faith produces anemic religion with Christian language; substituting political organization for faith produces the French Revolution and communism.

Let’s consider another attempt to illustrate Gregg’s overall approach. What happens when reason opposes faith by holding exclusively to scientific inquiry? In “Faith Between Reason and Feeling,” Joseph Ratzinger explores a conversation between three Nobel Prize–winning scientists about Albert Einstein’s beliefs about God and Max Planck’s claim that religion and science don’t conflict. Werner Heisenberg thought science is objective, about truth and falsehoods, but religion is subjective. Ratzinger recognizes that Heisenberg had some—shall we say—uncertainty about whether civilization could survive such a separation. Gregg writes, “In short, the scientist—the Enlightenment figure par excellence—recognized that if faith were primarily concerned with subjective experiences such as emotions, and if knowledge were reduced to what is empirically verifiable, we should have a major problem.” They did. The rest is history. That was 1927. Hitler came to power six years later.

If only scientific investigation can produce rational beliefs, then Christianity goes out the window, but morality does, too.

Why did “the ostensibly rational, upper-middle-class men who had studied in universities in a country that regarded itself as an advanced culture” end up following “a poorly educated Austrian drifter”? If only scientific investigation can produce rational beliefs, then Christianity goes out the window—but morality does, too. We’re just material forces in motion, and the preciousness of life evaporates like the morning mist. Rudolf Höss, a commandant at Auschwitz, saw the death camps as a triumph of technology, not as the Holocaust it was.

Now, of course, you can be an atheist committed to the natural sciences without being a Nazi. Gregg uses an extreme case to make his point. And an unbeliever can endorse Gregg’s central thesis—that separating faith and reason produces serious difficulties—without becoming a Christian. (Indeed, if I were an unbeliever, I think I’d want many, but not all, Americans to be warmly Christian without being zealots. There are positive spillover effects.) Apart from the historical example, Gregg raises an important philosophical question. Science requires, as he puts it, “a presumption of order and intelligibility.” If God created us in his image, then we presume the world’s order and intelligibility. If there’s no God and we’re molecules in motion, then we should question our ability to understand the world—indeed, we should question whether our scientific enterprise can even begin.

A church devoted to feelings alone, and not to reason, can’t defend Western values, or devote itself to the much more important task of defending the faith.

We live in an age ripe for unsubstantiated claims and accusations, in a culture awash in vitriol, tempting every decent man to put his head under a rock. But we can’t do that. A Christian philosopher (name withheld to protect the guilty) told me years ago he thought the New Atheists were making inroads with Christian students because the atheists appealed to students’ God-given reason while the church appealed to their feelings. A church devoted to feelings alone, and not to reason, can’t defend Western values, or devote itself to the much more important task of defending the faith.