Often I have remarked to my homiletics students and other young pastors that they should think of sermons as part of a curriculum. Rather than producing graduates with formal knowledge in Bible, or giving sermons with little thought to the potential of cumulative years of preaching, the pulpit curriculum would have as its goal to mature people in the whole counsel of God. The ultimate goal should be the glory of God; the penultimate goal of the instruction should be to make disciples who fulfill their role as stewards of the gospel in the church and in the world. The penultimate and ultimate goals thus guide all planning of preaching, carrying a generation of believers through the bulk of the sixty-six books that reveal the goal of the God of redemptive history. The approach should be expositional, deliberate, and practical.

I anticipated that I would find similar appeal for a program of study for pulpit ministry in Scott Gibson’s Preaching With a Plan: Sermon Strategies for Growing Mature Believers. Gibson is the Haddon W. Robinson Professor of Preaching and Ministry and director for the Center for Preaching at Gordon Conwell Theological Seminary. He serves the church with many writings on preaching, providing a wealth of strategies for communicating the biblical text more effectively within contemporary culture. This work has a unique pastoral focus in comparison to his other writings, emphasizing “discipleship through our sermons” (14).

In six brief chapters, Gibson shares many seasoned pastoral insights on audience analysis. Here is the primary thrust of the book: The needs of the congregation are the driving factor in sermon planning. Therefore, one reads of Gibson’s casual encounters with church members, and of tools that will “assess the trends in the church” ( 89). The work is as much about the task of faithful shepherding based on members’ needs as it is about preaching. 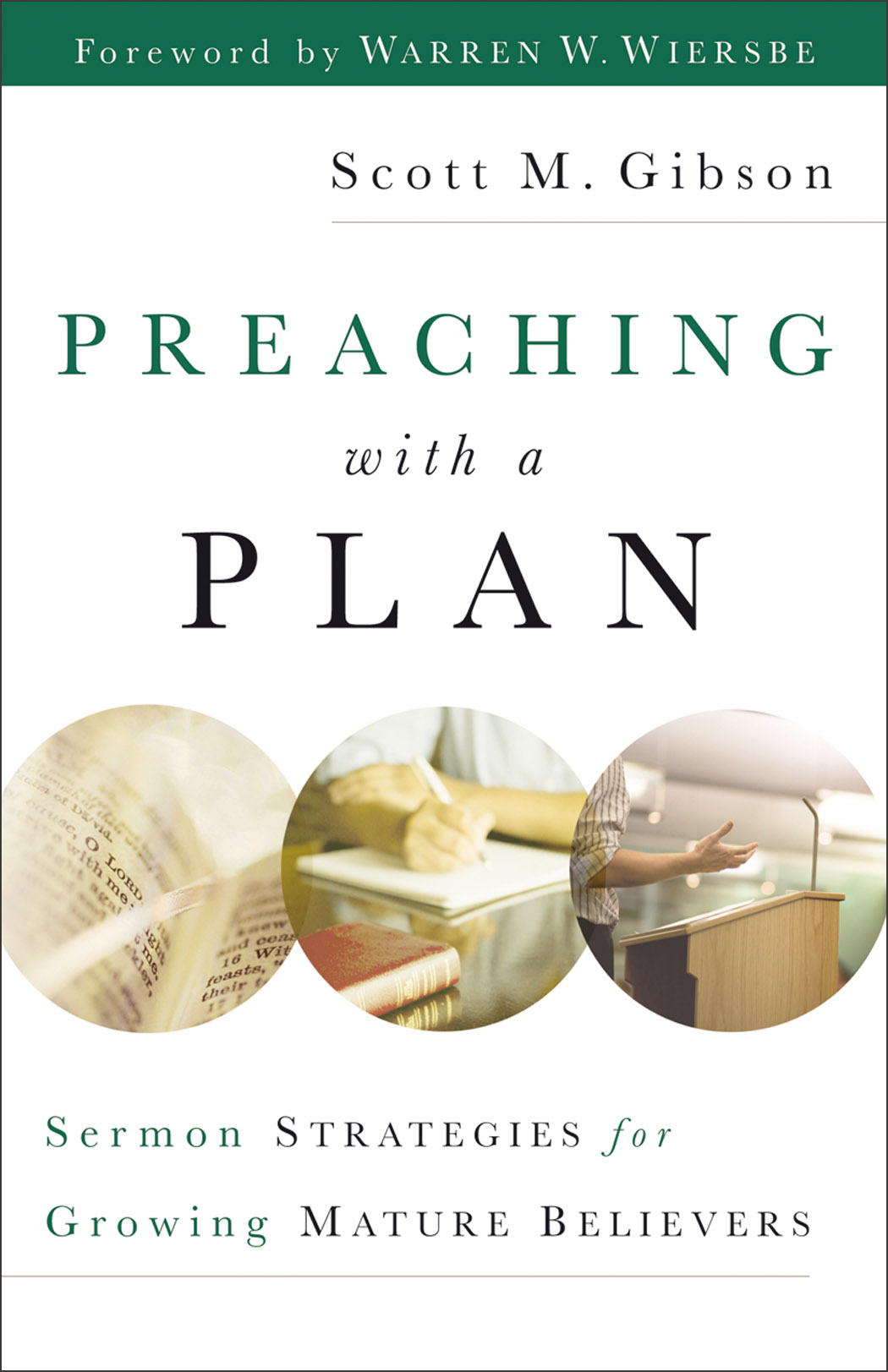 Preaching with a Plan: Sermon Strategies for Growing Mature Believers

Preaching with a Plan: Sermon Strategies for Growing Mature Believers

The author provides many admonitions toward items that might detract from diligent, intentional sermon planning. When discussing text selections, he warns, “Too many preachers have their needs, their concerns, their pet theological positions, and their darling texts to promote or emphasize when they choose texts for preaching” (28). Similarly, seeing the danger of “spiritual lethargy” for pastors, he cautions that the “white fog of boredom has the potential of sabotaging the very essence and purpose of our calling” (53). The audience of such counsel seems to be those newer to the pastorate rather than veteran pastors.

Beyond the above words, my commendations for this book are few, for the book has many shortcomings. It is much more philosophical than it is concrete. Gibson writes for three chapters before he discusses “a process for intentional planning” in the fourth (65). Even this chapter’s process makes arbitrary categories for determining the “spiritual age” of one’s congregation: infant, toddler, child, adolescent, young adult, middle age, and older adult (73). These divisions are reminiscent of a soteriology that sets apart so-called carnal Christians from mature believers, and they could establish false target groups as the basis of one’s preaching calendar. While he does offer some very generalized instructions toward planning preaching, they tend to be obvious: “First ask God for wisdom . . . pray about the task of discerning where your congregation is spiritually” (82).

The author quotes too many authorities on preaching. The work reads like a Who’s Who list of preachers, historical and modern, and the number of authorities quoted detracts from Gibson’s ability to express a thoroughgoing perspective on any topic in the book. The intent of the writer might be to strengthen his argument by marshaling the weight of respected pastors. Occasionally, however, this results in juxtaposing differing views as equally valid options. I wished for the professor of preaching to explain more of his personal theory and practice.

The most significant weakness of Gibson’s manual is that it lacks a constructive theology for preaching as discipleship. As a result, some of the writer’s suggestions seem incomplete, others seem narrow, and still others seem contradictory. For example, the author notes, “a particular text may not be the most appropriate for [a] church at [a given] time” (26). He does not, however, provide any wisdom for discerning when texts might be inappropriate. This same fault arises when Gibson states, “series preaching can also allow preachers to get into ruts . . . without consideration of those whom they are supposed to be discipling. It can also allow preachers to be lazy” (42). How so? And what is the superior alternative, and why?

Multiple times the work encourages the use of a lectionary for developing a preaching plan. Yet one must ask the author why he recommends an instrument that will invite someone from outside of a congregation to determine that church’s preaching schedule? This seems contradictory to Gibson’s thesis of planning based on congregational needs. Throughout the book one fails to find any biblical or theological means of weighing perceived audience needs in one’s scheduling. While the authors leaves open many plausible means of planning, he does not propose one determinant theory for using preaching to make disciples. There is a latent seeker-sensitivity notion in this work. There is no discussion about connecting a plan for preaching the whole counsel of God to growing disciples.

No one can fault Gibson for stressing discipleship in preaching. We are called to make disciples of all peoples (Matt 28:18–20; 2 Tim 2:1–2). Nonetheless, readers must look elsewhere to find a theology and method of connecting expositional preaching to a plan for deepening disciples in their faith.

Eric C. Redmond (PhD, Capital Seminary and Graduate School) is associate professor of Bible at Moody Bible Institute. He formerly served on the Council of The Gospel Coalition. He and his wife, Pamela, reside in Brookfield, Illinois, and they have five adult children.