Over the past couple of years, evangelicals and other Christians have been bombarded with “options.” These options are paradigms that typically draw on past figures or movements to provide a blueprint for contemporary faithfulness. Rod Dreher’s much-discussed The Benedict Option [read TGC’s review] made the “option” language commonplace in Christian discourse. Since then, we’ve been offered many other options, including, but not limited to, the Buckley Option, the Kuyper Option, the Wilberforce Option, the Franciscan Option, the Augustinian Option, the Gospel Option, and the Paleo-Baptist Option (the latter is my own contribution to the discussion).

The Pietist Option: Hope for the Renewal of Christianity is a book-length exposition of Pietist identity, with emphasis on Philip Jacob Spener’s Pia Desideria (1675) as a pathway for evangelical renewal. The co-authors—historian Christopher Gehrz and pastor Mark Pattie—are both members of the Evangelical Covenant Church, a denomination rooted in Pietism. Gehrz also teaches at Bethel University, a school with roots in a Baptist form of Pietism.

In recent years, Gehrz and likeminded scholars (especially Roger Olson) have been attempting to promote renewed academic interest in Pietism and to commend its virtues. The Pietist Option is the latest contribution to this literature, and the one most conducive to a general evangelical readership.

The Pietist Option is divided into eight short chapters that include a combination of historical summary, diagnosis of perceived shortcomings in American evangelicalism, and prescriptions rooted in Pietist identity. The authors argue that Pietism is both a movement and also an ethos (3–4).

As a movement, Pietism is identified with figures such as Spener, August Hermann Francke, and Count Zinzendorf, and ecclesial traditions such as the Moravians, Evangelical Brethren, and Evangelical Covenant Church. These movement Pietists had a pronounced influence on early evangelicals, especially John Wesley, who adapted Spener’s renewal program for the emerging Methodist movement.

As an ethos, Pietism is a cluster of distinctives (the authors like the term “instincts”) that transcend any one tradition and can be found throughout the evangelical world. These instincts include an emphasis on a personal relationship with Christ more than theological boundaries, an evangelical ecumenism, an emphasis on Christian experience rooted in the new birth, and a future hope rooted in the resurrection.

The result is a form of Christianity that is suspicious of doctrinal certainty, emphasizes faith-based activism, especially on behalf of the marginalized and oppressed, and is centered on a fruitful Christian life following the example of Jesus. The authors believe these distinctives are exemplified in the six principles Spener outlined in Pia Desideria:

The book winsomely commends these Pietist distinctives as the antidote to perceived evangelical overemphasis on orthodoxy, sectarianism, and a malformed cultural engagement that is more concerned with gaining and holding power than promoting the common good.

As one who deeply appreciates the Pietists and their contributions to evangelicalism, I nodded a fair amount as I considered the authors’ call to a more radical discipleship and holistic mission. But there is more to the story than simply retrieving the best of Pietism for contemporary evangelical renewal. 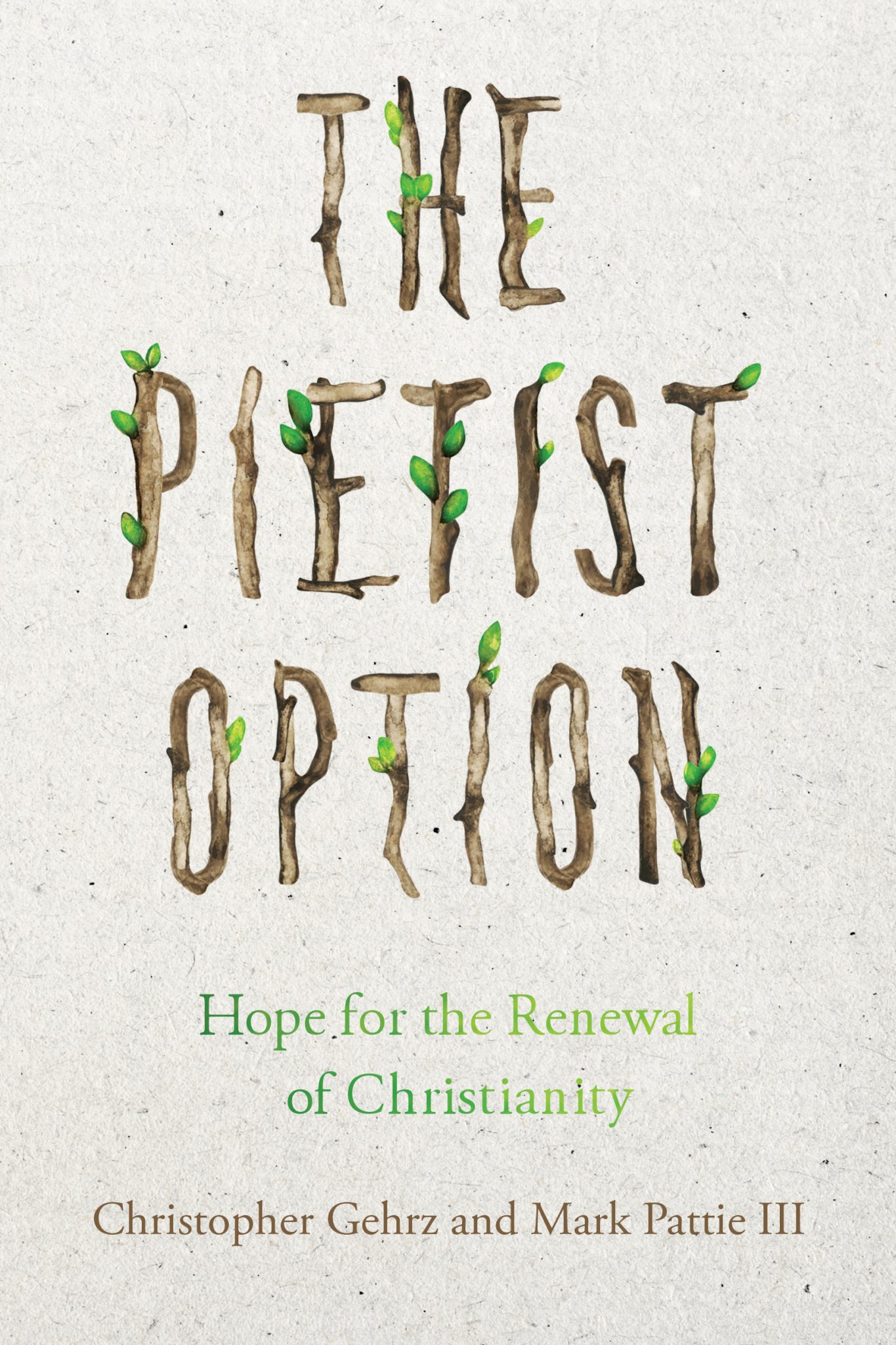 The Pietist Option: Hope for the Renewal of Christianity

The Pietist Option: Hope for the Renewal of Christianity

In The Pietist Option, Christopher Gehrz, a historian of Pietism, and Mark Pattie, a pastor in the Pietist tradition, show how Pietism holds great promise for the church—and the world—today. Modeled after Philipp Spener’s 1675 classic, Pia Desideria, this timely book makes a case for the vitality of Pietism in our day.

Taking a hard look at American evangelicalism and why it needs renewal, Gehrz and Pattie explore the resources that Pietism can provide the church of the 21st century. This concise and winsome volume serves as a practical guide to the Pietist ethos for life and ministry, pointing us toward the renewal so many long for.

Behind Our Family Debates

Evangelical scholars have been debating the nature of evangelical identity since the 1980s. To simplify a complicated conversation for the sake of a book review, there have been two broad trajectories. One trajectory might be called the Reformed/Baptist/Dispensational wing, and it tends to emphasize the importance of maintaining doctrinal fidelity, to prioritize evangelism as central to Christian mission, and often lands on the political spectrum somewhere between the center and the right.

To simplify a complicated conversation for the sake of a book review, there have been two broad trajectories.

The other trajectory might be called Wesleyan/Holiness/Anabaptist/Pietist wing, and it tends to emphasize the center (Jesus’s teachings) more than doctrinal boundaries, to advocate for a view of Christian mission that synthesizes evangelism and justice, and often lands on the political spectrum somewhere between the center and the left. As with all such discussions, many evangelicals don’t fit neatly into either trajectory. But observers agree the two wings are there, often lying just behind many of evangelicalism’s family debates.

Like many authors before them—including Donald Dayton, Stanley Grenz, Brian McLaren, Kenneth Collins, Randall Balmer, Jim Wallis, and Roger Olson, among others—Gehrz and Pattie commend the Wesleyan/Holiness/Anabaptist/Pietist trajectory of evangelical identity: what the authors call the Pietist ethos. The Pietist Option plays a particular role in this literature by commending insights from movement Pietism as the port of entry into the larger stream of ethos Pietism, which the authors believe to be the most authentic (or at least the healthiest) expression of evangelicalism.

And though their vision is winsome and their tone respectful and constructive, it’s not too hard to see the Reformed/Baptist/Dispensational trajectory as the foil to this story. One gets the impression that it’s precisely the sorts of evangelicals who resonate with groups like The Gospel Coalition who need to consider the Pietist Option so they can embody a more excellent way.

Toward a Balanced Pietism

Most historians agree that Continental Pietism was one of the key tributaries that flowed into the river of modern evangelicalism, along with Puritans and Presbyterians from the British Isles. And we see the instincts of the movement Pietists embodied in (or at least claimed by) the Wesleyan/Holiness/Anabaptist/Pietist wing of American evangelicalism. But there’s more to the story. The same Continental Pietists who gave us Pia Desideria and Moravian missions and Wesley’s “strangely warmed” heart also gave us Immanuel Kant and Friedrich Schleiermacher.

Closer to home, the Pietist ethos that Gehrz and Pattie champion, while it has much to appreciate, has introduced into evangelicalism a fuzziness toward (and sometimes outright rejection of) biblical inerrancy, an openness to inclusivism and sometimes universalism, an egalitarian view of gender roles, an openness toward progressive views of gender identity and human sexuality, a rejection of penal substitutionary atonement, and Open Theism.

This raises the question of whether the Pietist Option at least implicitly opens the door to tired dichotomies—between the “red letters” and “black letters” of Scripture, between Jesus and Paul, between the kernel of the gospel and the husk of doctrine—that have fueled theological revisionism and moral declension among so many contemporary evangelicals.

Most TGC readers do need to learn more about Pietist movements. When we aren’t at our healthiest, we can drift into the sort of spiritual lethargy that first inspired men like Spener, Francke, and Zinzendorf. But these are far from the only wells from which we should drink.

Most TGC readers do need to learn more about Pietist movements. When we aren’t at our healthiest, we can drift into the sort of spiritual lethargy that first inspired men like Spener, Francke, and Zinzendorf. But these are far from the only wells from which we should drink. The Puritans and the lesser-known Dutch Nadere Reformatie (Second Reformation) were also renewal movements that cultivated many of the same instincts as the Pietists, but in ways more deeply rooted in a robust doctrinal vision. The same sort of argument could be made for later Dutch Reformed Neo-Calvinism and many American evangelicals during the postwar era. We need all of these ingredients (and others) in the evangelical cake mix if the flavor is to be properly balanced.

Doctrine and practice should reinforce each other, lest we slide into mere doctrinal boundary-maintenance on the right, or boil Christianity down to a vaguely Christian ethic on the left. The Pietist Option functions well as a historically informed introduction to one stream of American evangelicalism, but it’s less effective as a prescription for current evangelical woes. Many of us are convinced that several of those woes are the fruit—perhaps unintended—of the very Pietist ethos our friends are advancing.