Probably most confusion over Rod Dreher’s much-discussed The Benedict Option could be resolved with a careful read of the book’s subhead: “A Strategy for Christians in a Post-Christian Culture.” Not “the” strategy, but “a” strategy.

Do you need to adopt Dreher’s Orthodox convictions about the formative effects of liturgical worship? Not necessarily, though you’ll want to consider whether worshiping in a church that looks like a mall with music that sounds like Top 40 radio helps you develop counter-cultural spiritual instincts.

Do you need to homeschool your children or start a classical school, because “it is time for all Christians to pull their children out of the public school system,” as Dreher contends? Not necessarily, but you might be inspired as you learn about the schools profiled by Dreher, senior editor and prolific blogger at The American Conservative.

No, you don’t need to agree with all the details of Dreher’s strategy, dubbed the Benedict Option in honor of Benedict of Nursia (AD 480–547), the founder of Western monasticism. But you’ll remain confused if you don’t agree that some strategy is necessary for sustainable Christian mission in an increasingly post-Christian culture.

For all the details, Dreher’s message is simple: to be for the world we need to sometimes be away from the world. How can we testify to Jesus if we lose our faith in him amid cultural pressures? “We cannot give the world what we do not have,” Dreher writes. Or, to borrow from Jesus in his Sermon on the Mount, “You are the salt of the earth, but if salt has lost its taste, how shall its saltiness be restored? It is no longer good for anything except to be thrown out and trampled under people’s feet” (Matt. 5:13).

Dreher opens with his personal motivation and perspective as a parent. “Nothing changes a man’s outlook on life like having to think about the kind of world his children will inherit.” Other parents can relate. With the birth of my son I suddenly saw the need to teach him the Methodist hymns of my youth, though we no longer belong to a hymn-singing Methodist church. I wanted him to know his family’s spiritual heritage so that it’ll continue in and through him to further generations, until Jesus returns.

Parenting frames much of the book’s prescription for our culture’s ailments. In short, if we want our children to grow into sturdy faith, we must make sacrifices that show them we would rather have Jesus than the world.

“If Mom and Dad don’t stand firm and are not wiling to be thought of as peculiar by their own friends for their strictness,” Dreher writes, “then the kids don’t stand a chance.”

Christians must make immediate, drastic changes, Dreher argues. Parents too quickly say yes to their children in order to retain their fleeting affection. Why would we give our children smartphones, for example, when we would never give them a library full of ponographic videos? “This is morally insane,” Dreher says. 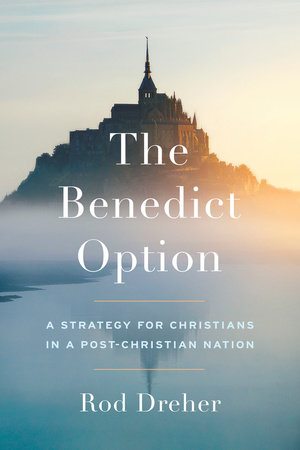 But strong, strict families aren’t enough, according to Dreher. The forces eroding Christian orthodoxy are too powerful for individuals and families to resist alone. “We need to embed ourselves in stable communities of faith,” Dreher says. So is the church prepared to incubate the Benedict Option? Not exactly, Dreher concedes, because too many of us “expect our religion to be comfortable.”

How did this happen? When did the church stop being the church, a ship suitable for carrying heavenly pilgrims safely through the stormy seas of doubt and disbelief?

You needn’t agree with Dreher’s historical analysis in order to share his alarm for our moment. Dreher relies on partisan sources as he blames the Protestant Reformation for our crisis of spiritual authority. His take on medieval nominalism and William of Ockham suffers reductionism. Would we turn back the clock on medieval philosophy if nominalism gave us modern medicine but also made us reflexive idolaters? Even if we all agreed we should, we couldn’t.

Closer to our own time, Dreher presents a familiar case for culture war erupting with the sexual revolution of the 1960s. But he misses the link between the Religious Right’s rise and racist grievances—perhaps the most significant reason culture war consumed the church’s credibility. Social conservatives will wander in the cultural and political wilderness until they confront and confess their stained history on race.

Still, I side with Dreher when he declines to see the election of President Trump as a watershed victory for fellow Benedictines. Politics may have ushered in many problems, but as Dreher argues, “politics will not save us.” If anything, Dreher could have gone much further in his warning for Christians who think Trump will make the church great again.

“If conservative church leaders aren’t extraordinarily careful in how they manage their public relationship to the Trump phenomenon,” Dreher warns, “anti-Trump blowback will do severe damage to the church’s reputation.”

Just a couple months into President Trump’s tenure I’m worried about whether the church can even hold together. Wedges of racism and sexism have driven Christians apart. Dreher’s book was obviously written for a Hillary Clinton presidency, but no matter who had won, the campaign revealed how easily Christians could be manipulated on both sides to compromise their conscience for partisan ends. Now, Trump’s unstable, ambivalent leadership has turned brother against brother in a scramble for access and power. How can we witness together when we’re so divided ourselves? How are we supposed to love our neighbors—inside and outside the church—if we’re trained by politics to hate them?

My main fear with Dreher’s book is that the people who need it most won’t read it. How do you convince Americans that replacing fast food and cable news with fasting and hard labor will be good for their souls?

Overwhelming evangelical support for Trump suggests not many conservative Christians would agree with Dreher that “losing political power might just be the thing that saves the church’s soul.” Rather, they seem to believe the American Empire needs our partisan politics in service of God’s kingdom. I’m afraid that evangelicals will continue to obsess over national politics instead of pursuing creative and communal local strategies for spiritual health and mission. Follow the example of crisis pregnancy centers, Dreher counsels:

Here’s how to get started with the antipolitical politics of the Benedict Option. Secede culturally from the maintream. Turn off the television. Put the smartphones away. Read books. Play games. Make music. Feast with your neighbors. It is not enough to avoid what is bad; you must also embrace what is good. Start a church, or a group within your church. Open a classical Christian school, or join and strengthen one that exists. Plant a garden, and participate in a local farmer’s market. Teach kids how to play music, and start a band. Join the volunteer fire department.

Dreher would sell a lot more books if he proposed partisan politics as “the” strategy for Christians in a post-Christian era. But at least for Christians disabused by such failed promises, Dreher’s little way leads the right way.