Is America a Christian nation? Scholars often turn to the writings of the founders to try to answer that question. In One Nation Under God: How Corporate America Invented Christian America, Princeton history professor Kevin Kruse approaches it from a different angle: “There once was a time during which virtually all American agreed that their country was a Christian nation.”

But that brief moment occurred well after the founding during the Dwight D. Eisenhower administration, an era in which “one nation under God” was added to the Pledge of Allegiance and “In God We Trust” became the nation’s first official motto. Those rites and rituals, Kruse argues, helped convince ordinary Americans the United States was indeed—and had always been—a Christian (or at least “Judeo-Christian”) nation.

Catalysts For a Partisan Christian America

Historians have typically viewed the nationalistic religious revival of the 1950s as a byproduct of the Cold War. With the Soviet Union serving as the greatest global competitor to the United States, Americans defined themselves against the godless communists by attending church, lauding the Judeo-Christian values supposedly inherent in the American character, and inscribing deistic phrases in prominent public places. When I was a high school history teacher, I remember explaining the 1950s religious revival very much in this vein. 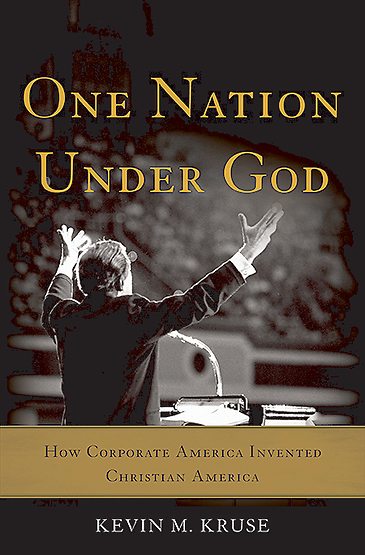 One Nation Under God: How Corporate America Invented Christian America

One Nation Under God: How Corporate America Invented Christian America

For Kruse, however, the 1950s wave of religious nationalism had its roots in the activity of corporate titans during the Great Depression. Beginning his narrative in the late 1930s, Kruse documents how the National Association of Manufacturers, U.S. Chamber of Commerce, and a slew of corporate leaders actively recruited clergy (and vice versa) in order to wage a public relations battle against the New Deal. Congregationalist James Fifield Jr., Methodist Abraham Vereide, and Southern Baptist Billy Graham (among other ministers) worked with conservative business and political leaders to combat the collectivism of the New Deal and promote their vision of Christian libertarianism. Claiming the New Deal state challenged the foundation of faith-based freedom on which the American nation had been built, they urged Americans to return to “freedom under God.”

Uncoupling their religious rhetoric from its roots in the fight against the New Deal, [Eisenhower] considerably broadened its appeal, expanding its reach well beyond the initial circle of conservative Protestants to welcome Americans across the political and religious spectrum. (293)

The New Deal state remained, now baptized in the very phrases and rhetoric that had been deployed against it. The religious revival under Eisenhower seemed to touch every nook and cranny of American life, and Kruse documents its reach in intricate detail: record-high church attendance, “back to God” television specials, the institution of the National Prayer Breakfast. Madison Avenue and Hollywood got in on the action, too. Cecil B. DeMille, in order to promote the release of The Ten Commandments (1956), helped to establish 4,000 Ten Commandments monuments across America.

But the consensus built during the Eisenhower administration quickly collapsed at the local level where the vagaries of a general “faith in faith” had to be translated into particulars. Which prayers should be said, which Bible (if any) should be used? The Engel v. Vitale (1962) and Abington School District v. Schempp (1963) decisions placed prohibitions on government-sponsored school prayer and Bible reading, leading disappointed Americans to fire off letters to the Supreme Court justices, support the push for the Becker Amendment, and laud Nixon’s presidency—especially his embrace of Christian nation rhetoric.

Yet, as Kruse documents, Nixon’s calculated use of religion—from speaking at a Billy Graham revival to holding church services in the East Room with invitations carefully doled out as a means of political reward and/or pressure—smacked of partisan politics in a way Eisenhower’s efforts had not. And so One Nation Under God ends as it began: with a partisan Christian America, promoted by a cadre of political and business conservatives, sanctified by willing Christian leaders.

Kruse’s first book, White Flight: Atlanta and the Making of Modern Conservativism (Princeton University Press, 2007), won numerous awards. One Nation Under God is a continuation of that work both in terms of its quality and its emphasis on 20th-century conservative politics. Kruse’s thorough research and lucid prose are readily apparent; his knack for the perfect anecdote or quote only happens as a result of exhaustive research. I should mention, too, that although Kruse does not specifically focus on evangelicals, his book does have potentially sobering implications for understanding postwar evangelicalism. In particular, Kruse’s analysis suggests evangelicals should consider the role that a more enthusiastic embrace of religious nationalism—rather than simply adhering to orthodoxy—has played in their relative numerical strength compared to liberal mainline Protestants.

But while I was thoroughly engrossed in Kruse’s narrative, I could not completely follow him in all his conclusions. For one, although Kruse links opposition to the New Deal with the promotion of religious nationalism, Christian America ideas and rhetoric existed in numerous streams throughout (and before) the 1930s. For example, Matthew Sutton documents in Aimee Semple McPherson and the Resurrection of Christian America (Harvard University Press, 2007) how McPherson maintained support for the New Deal throughout the 1930s even as she traveled the country with her “America, Awake!” tour, urging Americans to return to the faith of the founders and guard against communism. As for the numerous pre-1930s promotions of Christian America rhetoric and ritual, Kruse tends to de-emphasize their importance. So, too, he overlooks the long tradition of Christian America rhetoric as a form of protest and celebration in African American thought—a tradition alive and well in the years Kruse analyzes.

Kruse also seems to veer too far in downplaying the Cold War’s effect on the United States’ postwar religious resurgence. He puts the point at which the Soviet Union, rather than the New Deal, became the target of “godly politics” in 1953. Yet Jonathan Herzog’s The Spiritual-Industrial Complex: America’s Religious Battle against Communism in the Early Cold War (Oxford University Press, 2011) provides ample evidence that the Soviet Union loomed large in pushes for nationalistic spiritual renewal and Christian nation rhetoric within the Truman administration.

Those caveats aside, Kruse is right to suggest that something new occurred in the 1940s and 1950s. Not a Christian America created ex nihilo—as the subtitle of the book seems to suggest—but a Christian America reforged from elements of older Christian nation myths and repurposed at an unprecedented scope thanks to advancements in mass media and the enthusiasm of President Eisenhower. Readers of One Nation Under God will find a richly textured chronicle of a transformative moment in which business, political, and religious leaders worked to ceremonially unite God and government as never before.

As for how well Kruse’s chronicle goes over, much will depend on one’s view of Christian America in the first place. Evangelicals on Team Russell Moore will find plenty of useful material for illustrating the pitfalls of going too far in blending the Christian gospel with American nationalism. Those who find it more difficult to separate love of country with their faith will undoubtedly find it more difficult to appreciate One Nation Under God.