“For now, we walk through a shadow land, but one day the sun will rise, and we will see things as they really are” (94).

Until that day when the sun’s light is no longer hindered, Christians will continue to defend the gospel. To this end, Alister McGrath offers another resource for the church: Mere Apologetics: How To Help Skeptics and Seekers Find Faith. Writing in the mold of his fellow Oxford Don, C. S. Lewis, McGrath provides an insightful and readable introduction to apologetics that will not only equip the Christian to engage the skeptic but also equip Christians to address their own doubt.

The very idea of apologetics can make many Christians uneasy from the outset. Shouldn’t we just leave this task to likes of intellectuals on par with the Lewis and McGrath? What if someone smarter than me asks me a question I can’t answer? These concerns needlessly frustrate Christians in their God-given calling to “always be prepared to make a defense to anyone who asks you for a reason for the hope that is in you” (1 Peter 3:15). McGrath meets his reader at this point by explaining what apologetics is (and isn’t), distinguishing it from evangelism, and demonstrating from the Scriptures how apologetics is an important tool in “persuading people that Christianity makes sense” (71).

Apologetics from the Beginning

McGrath divides the book into nine chapters. The first four chapters lay the groundwork and carefully define apologetics, while the final five chapters provide the reader with workable tools for engagement and actual apologies for the Christian faith. From the beginning, McGrath is clear that apologetics is “a defense” (15). Accordingly, the task of the apologist is to defend, commend, and translate the Christian faith to his audience. McGrath demonstrates from Scripture that Christians have engaged in apologetics from the beginning. The early church took seriously the work of communicating the gospel in a manner that connected with and confronted the fallen culture.

One of the more helpful tools McGrath gives his reader comes in the second chapter, when he traces the intellectual climate of the past few centuries moving from modernity that took shape during the Enlightenment to the rise of postmodernity in the 20th century. Rather than critiquing these intellectual frameworks, McGrath takes them as a given and calls the church to contend for the faith that was once for all delivered to the saints (Jude 1:3). McGrath urges his reader to understand culture because the apologetic task always takes place in a context where sin has tainted the very core of assumptions and common understandings. Accordingly, the apologist seeks to expose the faux reality created by sin and help his audience see the “intrinsic truth, beauty, and goodness of the Christian faith” (47). Thus, the apologist need not cleverly invent anything new but carefully show his audience what is already there. Simply put, this task requires utter dependence on the grace of God and nothing less than “the power and presence of the risen Christ” (45). 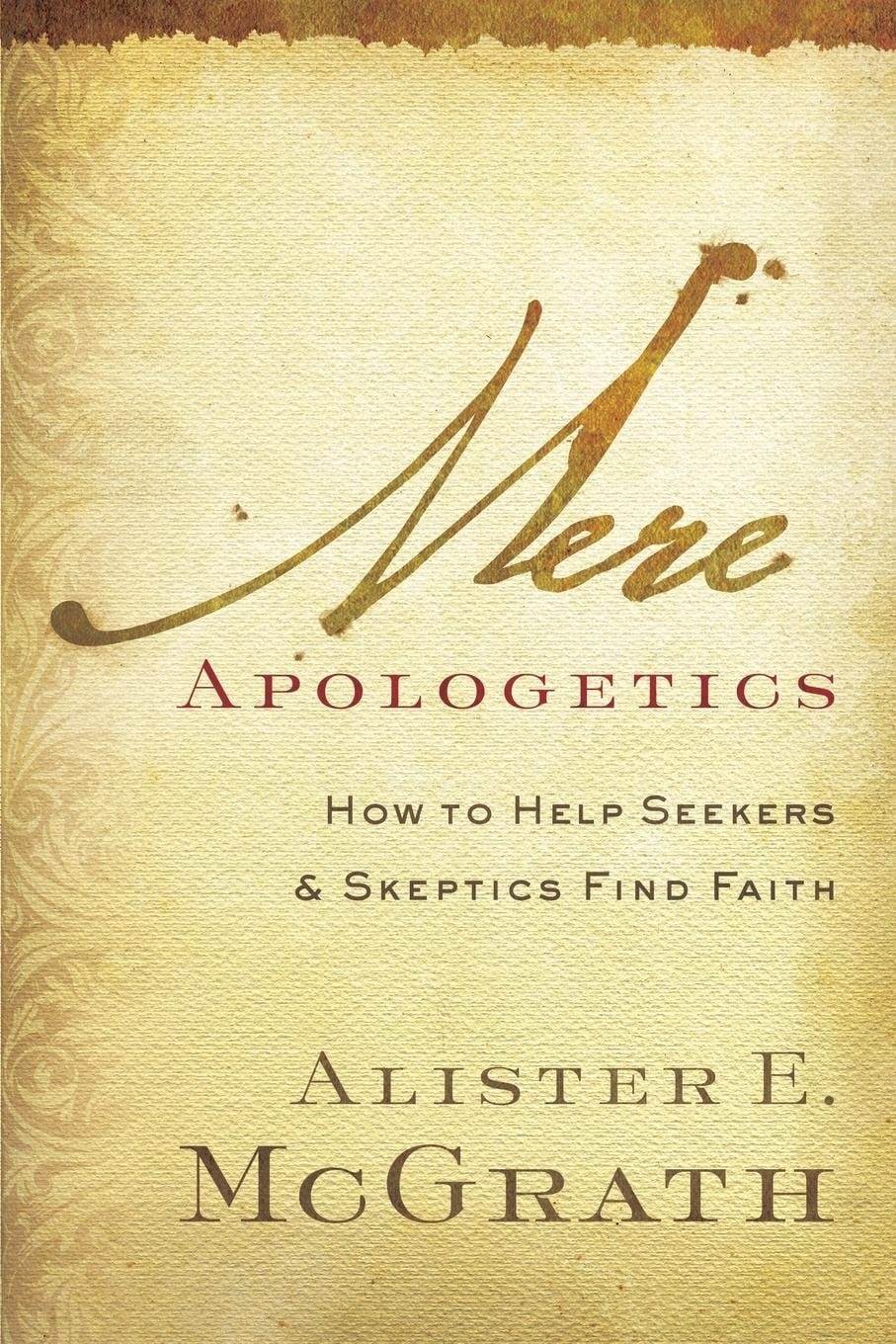 Mere Apologetics: How To Help Skeptics and Seekers Find Faith

Mere Apologetics: How To Help Skeptics and Seekers Find Faith

In the spirit of C. S. Lewis’s Mere Christianity, Alister McGrath’s Mere Apologetics seeks to equip readers to engage gracefully and intelligently with the challenges facing the faith today while drawing appropriately on the wisdom of the past. Rather than supplying the fine detail of every apologetic issue in order to win arguments, Mere Apologetics teaches a method that appeals not only to the mind but also to the heart and the imagination. This highly accessible, easy-to-read book is perfect for pastors, teachers, students, and lay people who want to speak clearly and lovingly to the issues that confront people of faith today.

Using Peter’s Pentecost sermon (Acts 2) and Paul’s sermon to the Athenian philosophers (Acts 17), McGrath demonstrates how to boldly proclaim and defend the entire gospel while at the same time taking into account common assumptions. Although their approaches differ, both Peter and Paul preached the same gospel in a way that took into account the presuppositions and assumptions of their hearers. Peter used the sacred Scriptures to demonstrate to his Jewish listeners that Jesus of Nazareth is the long-awaited Messiah of Israel, while Paul communicated with the Greeks by showing that what they held to be unknown, God has “made known through the resurrection of Christ” (64). McGrath teaches his reader that apologetics done rightly defends, commends, and translates the gospel in a way that ensures the audience can comprehend it.

In the latter half of the book, McGrath provides actual apologies to engage the skeptic. McGrath’s displays his mastery of the subject as he shows how the Christian faith addresses “both the ‘reason within’ and the ‘reason without’—the rationality of the human mind, and that embedded in the deep structure of the universe” (102). Fundamentally, McGrath contends that identifying “clues about the meaning of the universe . . . are significant pointers to the capacity of the Christian faith to make sense of life” (121). Thus, the apologist must demonstrate how these pointers actually direct us to the reality God has graciously revealed in his Word.

From the creation of the world to the deep longings humans have for relationship, justice, and yes, God, McGrath provides a Christian framework for understanding these issues. McGrath interacts with popular intellectuals from Richard Rorty to Richard Dawkins at a level that is accessible to a wide audience. In the process, he constantly refers back to Scripture, demonstrating that the Bible’s veracity is not compromised by the sophistication of modern-day Athenians. McGrath is at home not only with Christian doctrine but also with the prevailing wisdom of our day. He ably addresses major questions related to God and suffering while also teaching his reader various gateway tools for arguing for the rationality of the existence of God. This ability to speak winsomely from one world into the other makes the apologist’s sword unusually sharp. McGrath gives his reader the tools to get there.

Whether discipling a younger Christian, sharpening your own thinking about the faith, or conversing with an unbeliever, Mere Apologetics is a helpful introductory work to prepare believers to give a reason for the hope within them. Redemptive history proves that few of us will be called to preach to thousands of Jews as Peter did on the day of Pentecost or to address leading philosophers as Paul did in Athens. Nevertheless, we know all too well from our experience the fear arises when we are called to defend the name of Christ to the coworker or in the college dorm.

Although this book will not necessarily destroy the fear of man in your heart, it will give you confidence that the Christian faith can address the great questions of this generation as you prepare to be faithful for future gospel opportunities. Mere Apologetics is accessible and easily readable, allowing a Christian to gain necessary acquaintance with widely held philosophical contentions. In a few months, Lord willing, I will be teaching a course on apologetics in my local church. I intend to use this book as a resource both in my own preparation and to commend to those who participate. I am confident it will prove edifying for both.

Josh Manley is senior pastor of the Ras Al Khaimah church plant in the United Arab Emirates. You can follow him on Twitter.