If you ever wonder what you would’ve done had you seen Hitler rise to power, or African American children barred from white schools, Laura Fabrycky reminds us that we’re currently acting in the exact same way we would’ve then. For our time is no less plagued with controversy, injustice, tension, or despair than the times that preceded us.

As Dietrich Bonhoeffer—subject of Fabrycky’s new book, Keys to Bonhoeffer’s Haus: Exploring the World and Wisdom of Dietrich Bonhoeffer—watched synagogues burn throughout Berlin, so have we watched rioters set fire to churches, cars, and stores. And what have we done? Whatever role we have played in our local community or on the national stage is exactly what we would’ve done at another time in history, and that realization should be a sobering call to action.

Whatever role we have played in our local community or on the national stage is exactly what we would have done at another time in history, and that realization should be a sobering call to action.

Fabrycky’s narrative isn’t simply a biography of Bonhoeffer; it’s an interaction with his life story. It becomes poignant because she tells his story through the lens of her own. (She volunteers as a tour guide at his Berlin home where Bonhoeffer resided before his arrest.) Aware of her in-between status—she’s the wife of a U.S. foreign service officer—Fabrycky isn’t fully assimilated into German culture. She does, however, participate locally in a meaningful way in order to gain another lens through which to examine her American culture. 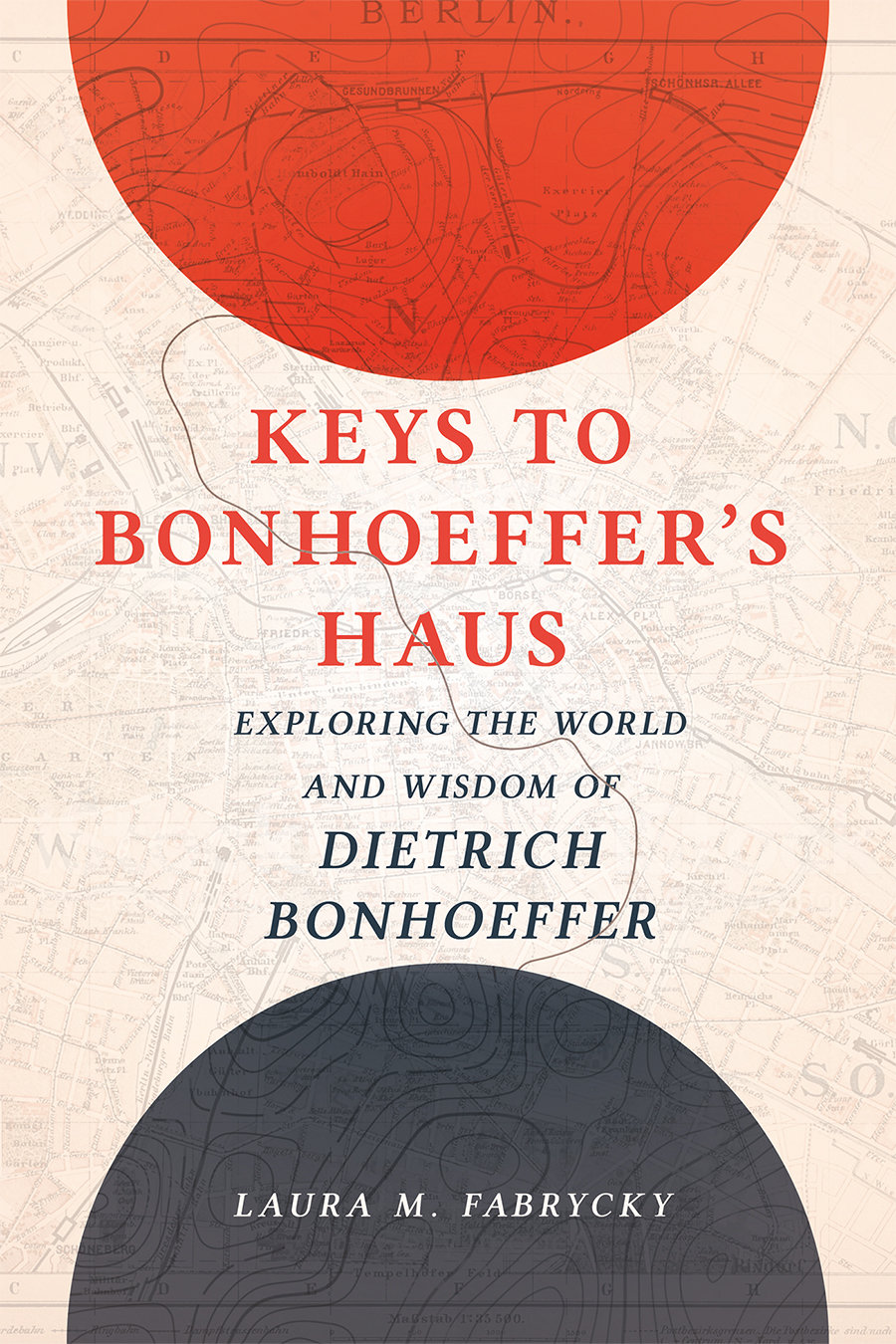 Keys to Bonhoeffer's Haus: Exploring the World and Wisdom of Dietrich Bonhoeffer

Keys to Bonhoeffer's Haus: Exploring the World and Wisdom of Dietrich Bonhoeffer

In Keys to Bonhoeffer’s Haus, Laura M. Fabrycky, an American guide of the Bonhoeffer-Haus in Berlin, takes readers on a tour of Dietrich Bonhoeffer’s home, city, and world. She shares the keys she has discovered there—the many sources of Bonhoeffer’s identity, his practices of Scripture meditation and prayer, his willingness to cross boundaries and befriend people all around the world—that have unlocked her understanding of her own life and responsibilities in light of Bonhoeffer’s wisdom.

The “keys” of the title refer to lessons Fabrycky has drawn from Bonhoeffer’s story, as hers overlaps and echoes his own. To read the book, then, is to experience the knowledge that, just as only Fabrycky could’ve penned this particular story, so too are we each given the gift of telling our story.

Whereas biographies of heroic Christians too easily morph into hagiographies, Fabrycky disrobes all the saintly romanticism from Bonhoeffer’s character, showing us a model of virtue and faith that feels approachable, relatable, and thus more condemning if we fail to aspire to his imitation.

She relays Bonhoeffer’s history. Going back generations, Bonhoeffer’s family shared a deep sense of civic responsibility, including a 91-year-old grandmother who defied Nazi guards attempting to forbid shoppers entering into a Jewish department store. Fabrycky relates what a legacy of grit and fortitude can do for creating a hero for a particular time and place.

Fabrycky rejects the American ideal of the lone gunslinging hero or the individual who pulls himself up by his bootstraps. Instead, she focuses on the Bonhoeffer who belonged to a world, to a group of people, to friendships that encouraged and strengthened him in his witness against injustice. When she meditates on Bonhoeffer’s year in New York City, she focuses on his interactions with the Abyssinian Baptist Church in Harlem—how this marginalized African American congregation influenced his faith more than the static, elite, white church near Union Seminary. As she writes, “That theology [at Abyssinian Baptist] was sung, preached, lived, and practiced in community.” Although Fabrycky doesn’t draw the direct link, those of us familiar with the author of Life Together and The Cost of Discipleship recognize the roots of Bonhoeffer’s thought in the Harlem community with whom he worshiped.

While Fabrycky wrote this book worlds away from the tragic deaths of George Floyd, Breonna Taylor, Ahmaud Arbery, and others, her book speaks directly to this time and seems providential in its publication date. We read about a German theology professor who refused to stay quiet in the face of national injustice. As Fabrycky recalls the speeches she gave on tour at the Bonhoeffer-Haus, the words are convicting for Americans in 2020:

During the Nazi era, Christians here and elsewhere failed their Jewish neighbors, and many others belonging to different groups. They were silent when they should have spoken up; they were complicit and, at times, even gleeful participants in persecution. They often used their beliefs to justify violence and genocide. . . . They did not see how their lives were connected to one another.

How Are We Responding?

The same words might be posed to white Christians who have witnessed crimes committed against black and brown brothers and sisters. Our lives are all connected. Are we seeing it? How are we responding to the time and place to which we’ve been called?

While Fabrycky wrote this book worlds away from the tragic deaths of George Floyd, Breonna Taylor, Ahmaud Arbery, and others, her book speaks directly to this time and seems providential in its publication date.

In 1964 Martin Luther King Jr. preached in a church in East Berlin before the wall fell. Fabrycky visits the church in celebration of the American holiday and hears a recording of his sermon. “In a real sense,” King preached to a packed-out crowd of attentive Germans, “we are all one in Christ Jesus, for in Christ there is no east, no west, no north, or south.” King knew that just as there is “neither Jew nor Gentile, neither slave nor free,” so too is there no east, no west, no black or white, “for we are all one in Christ Jesus” (Gal. 3:28).

When the Nazis began persecuting Bonhoeffer’s Jewish neighbors, he risked everything. As one tourist to the Bonhoeffer-Haus reflected to Fabrycky, Bonhoeffer “let go of his claims to his own life.” If we’re to be able to say we followed Jesus Christ in our time and place, we must imitate Bonhoeffer as he imitated Jesus. Through her gripping narrative, Fabrycky compels us to live like Bonhoeffer, foregoing the claims to our life, that we might confidently say, “Not I, but Christ lives in me, and the life which I now live, I live by faith of the Son of God.”

Jessica Hooten Wilson is the Louise Cowan scholar in residence at the University of Dallas in the humanities and classical education graduate program. She is the author of three books, including Giving the Devil His Due, which received a Christianity Today book award in the category of arts and culture.