Is there a God? If so, has he spoken to us in ways we can understand? Or must we rely on some irrational experience or guesswork for relating to God or the spiritual realm?

These are the questions Francis Schaeffer (1912–1984) addresses in his small but profound book, He Is There and He Is Not Silent. Published in 1972 during the “counterculture”—when everything seemed up for grabs in religion, philosophy, politics, and society—Schaeffer “understood the times” and knew what Christians needed to do (1 Chron. 12:32). 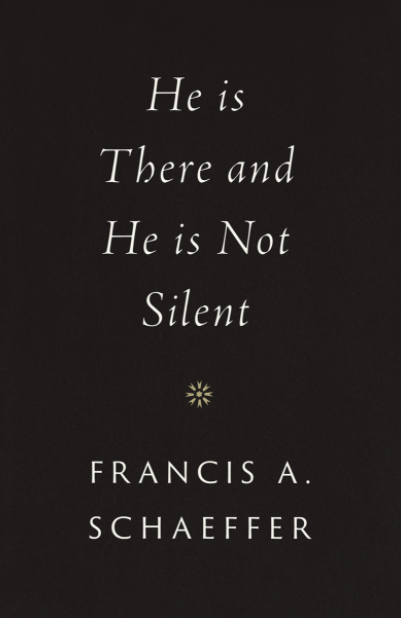 He Is There and He Is Not Silent

He Is There and He Is Not Silent

As one of the greatest Christian philosophers of the 20th century, Francis Schaeffer made it his mission to relate Christianity to the surrounding culture’s worldview. His works continue to have relevance today as Christians grapple with current issues in metaphysics, morals, and epistemology. In this redesigned apologetic work, Schaeffer encourages readers to have a deeper understanding of who they are, who God is, and how they know him as they encounter the infinite-personal God who is there and is not silent.

Shortly after becoming a Christian in 1976, I read Schaeffer’s books, starting with The God Who Is There. Not long after, I read He Is There and He Is Not Silent, and I’ve read it many times since. I developed a Christian worldview through his books, and Schaeffer gave me an intellectual courage that has only grown over the years. Indeed, many Christian thinkers were inspired by Schaeffer’s books, including Charles Colson, Michael Card, John Whitehead, Os Guinness, and Nancy Pearcey.

Schaeffer had a sharp mind, a warm heart, and what jazz musicians call “big ears”—the ability to listen well and respond sympathetically. Although some may want his arguments to be more thorough and his references to philosophers more nuanced, he had a nose for truth and knew how to defend it in ways that mattered to “the watching world,” as he put it. When people wanted him to discuss arcane apologetic theory, he’d say, “I am an evangelist!” He had an apologetic method, but reaching real people—not making a mark on academia—was his passion.

Schaeffer was a deep thinker. His thought penetrated cinema, philosophy, theology, and much more. For him, apologetics was never a matter of merely winning arguments, but of leading real people to the living God he knew. Schaeffer’s books often use the phrase “with tears” or refer to the anguish of those lost in the meaninglessness of his time. Even in his most philosophical books, Schaeffer shows his pulsing concern for people. On the same page he might switch from intellectual history to recounting an encounter with a lost person.

For Schaffer, apologetics was never a matter of merely winning arguments, but of leading real people to the living God he knew.

In He Is There and He Is Not Silent, Schaeffer speaks of a couple who stayed at L’Abri and spent hours talking with each other, trying to completely understand one another. Since they didn’t have the “infinite-personal God” as their final “integration point,” they couldn’t get to the bottom of what it means to be human or to be in a loving relationship. Schaeffer saw both the philosophical issue to be solved and also the existential problem to be faced. Unlike some other Christian thinkers, Schaeffer wrote with a profound sense of the lostness of modern people, which is evident throughout the book. That awareness gives his writings a vibrancy and pathos not often found in apologetics books.

He Is There and He Is Not Silent advances a brief philosophical argument for the existence of the Christian God. Unlike many other apologetic books, it acknowledges the history of ideas (sometimes in a rather swashbuckling way), tying in myriad cultural illustrations. Schaeffer considers the basic Christian worldview, rather than evidence for the reliability of the Bible or Jesus’s resurrection—although he never denied the worth of these arguments. He focuses on how the Christian account of reality explains what is (metaphysics), what we should do (morality), and know we can know (epistemology).

“The Metaphysical Necessity” gives the possibilities regarding the origin of existence. Either there is (1) no explanation for everything, (2) an impersonal explanation (mystical or materialistic), or (3) a personal explanation (Christianity). A “personal beginning” explains both human uniqueness and the order of the universe, since a divine mind is behind it. That infinite-personal being is three-in-one (the Trinity), which solves the problem of the one and the many, which other worldviews are unable to do. The unity and diversity in creation is based on God’s own unity (one God) and diversity (three persons).

In chapter two, “The Moral Necessity,” Schaeffer argues that we all have “moral motions,” or a sense of right and wrong. This is because we’re made in God’s image and have a conscience that answers to him. Without God, morality dissipates into merely human opinion, which can so easily turn ugly. Rather, the character of the infinite-personal God is the basis of morality.

Chapters three and four explain epistemology, or the basis for knowledge. The deepest problem in Schaeffer’s day, he grasped, was that people were alienated from a reliable source of knowledge due to their rejection of the God who speaks, revealing himself in nature, conscience, Scripture, and Jesus Christ. Both the philosopher, Ludwig Wittgenstein, and the film director, Ingmar Bergmann, said that only silence greets our quest for meaning and reality. But Schaeffer shows that the biblical worldview makes meaningful communication between God and people possible. We live in an orderly universe open to God’s communication and to human significance. He is there and he is not silent!

The book concludes with appendices on the meaning of biblical revelation and the nature of biblical faith. If an infinite-personal God exists, it would make sense for him to communicate to us verbally, since we as persons communicate verbally. God’s revelation in Scripture wouldn’t be exhaustive, but it would report the truths we need to know. Last, biblical faith isn’t a blind leap off of a cliff, but a well-informed choice to trust a reliable authority.

Take Up and Read

He Is There and He Is Not Silent condenses years of reading and conversation with thoughtful people about what matters most—God and our need to hear him. Please read it, since the essential issues and answers haven’t changed.

Souls are at stake.

2 The Simple Charm of ‘All Creatures Great and Small’

3 Is Numbers 5 Unjust to Women?