At the end of The Great Gatsby Fitzgerald, narrated through his protagonist Nick Carraway, reflects on the inescapable importance of the past in our striving for the future. Thinking about Gatsby and the green light, Carraway muses, “So we beat on, boats against the current, borne back ceaselessly into the past.” The lesson is that as humans move ever forward they are being driven ever back. This line well captures what historians call “the usable past.”

I was reminded of this quote as I read Thomas S. Kidd’s excellent biography, George Whitefield: America’s Spiritual Founding Father, on the life of the great 18th-century revival preacher. As Whitefield’s life was laid out carefully on the page, I became freshly encouraged that the lessons of history are important not just for today, but for tomorrow.

The publication of Kidd’s biography was timed for the 300th anniversary of the Grand Itinerant’s entrance into the world on December 16, 1714. Whitefield, of course, is famous as the preaching catalyst behind what we now call the Great Awakening, or sometimes the Evangelical Revival, that bookended the Atlantic Ocean. Yet outside of evangelical circles, Whitefield has remained veiled in the shadows of his colleagues John and Charles Wesley. In the latter part of the 20th century the Canadian Baptist pastor Arnold Dallimore wrote a two-volume biography of Whitefield that did much to bring him out of the dark. This work has been followed by a number of academic studies by historians like Jerome Mahaffey, Frank Lambert, and Harry Stout.

Kidd’s book marks a major step towards making Whitefield an unignorable figure in studies of 18th-century evangelicalism. Readers should be thankful that it is Kidd who published this book. As an expert in transatlantic revivalism, professor of history at Baylor University, senior fellow at the Institute for the Study of Religion, and an evangelical Christian, he brings both scholarly gifts and warm sympathy to his study. 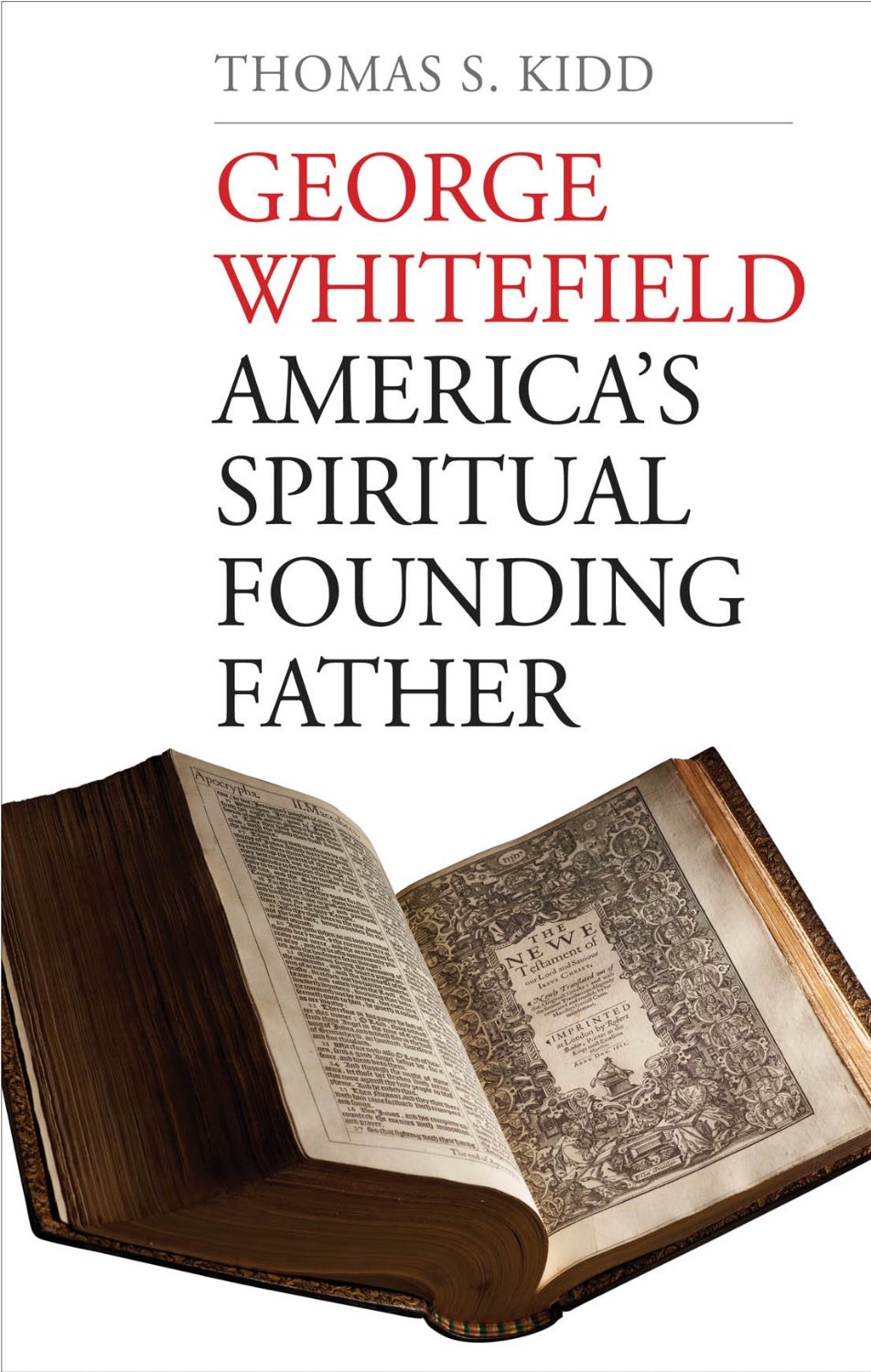 Kidd’s treatment of Whitefield is set apart from others for a number of reasons. Surprisingly for an academic work, it does not presume previous knowledge on the part of the reader. Heavy primary source documentation found in the endnotes and scholarly interpretation keeps it from being a popular biography, yet Kidd is nevertheless at pains to explain specialist language. For instance, he parenthetically describes a Dissenter as one who was not part of the Church of England, or the Septuagint as the Greek version of the Old Testament. For this reason the volume will not only be beneficial to the scholar and the student but also to the average layperson.

Coupled with this clarity of style, the book is enviously even-handed. As the first modern celebrity Whitefield was subject to uncritical admiration and bilious opposition, and rarely did people strike a middle road in their opinions of him. This has often been the case with his biographers, but Kidd is a notable exception. Although he admits to having a “high regard” for his subject, it does not lead him to clouded judgement, a pitfall of Whitefield’s hagiographers like John Gillies or Luke Tyerman. For example, Kidd explains Whitefield as a “creative religious entrepreneur” who revolutionized media to his advantage, yet largely avoided the problems often associated with celebrity pastors and was evidently not in the work of revival for the money. And though Whitefield was a major figure in the revivals, Kidd is quick to note that he was not the sole figure and that most conversions and revival meetings “happened without him.”

Perhaps the area that could suffer the most at the pen of the hagiographer is the problem of slavery. As with many evangelicals in his day, Whitefield made use of the slave trade—in his case to build an orphanage in Georgia. Though Kidd appropriately sets Whitefield in his context, showing him as a child of his time much like the nation’s founding fathers, he does not exonerate the itinerant’s role in this reprehensible institution.

In fact, one of the book’s major scholarly contributions to Whitefield studies is its incontrovertible argument that the evangelist actively broke Georgia laws banning slavery and introduced it to the colony before those laws changed. The volume is peppered with discussions of slavery and includes a chapter-length treatment where Whitefield’s role is shown as both sadly typical yet strangely radical. Though he used a system that “enslaved human beings” (as Kidd aptly describes it), Whitefield also preached to slaves and denounced the abuse of them by their masters.

Moreover, some historians have chastised Whitefield for his theological vacuity. Kidd helpfully demonstrates that Whitefield was in fact quite theologically informed and that this came through plainly in his sermons, journals, and correspondence. At various points Kidd mines Whitefield’s writings to show their deeply theological nature.

A more subtle highlight of the book is the attention paid to the role of women in Whitefield’s life and to the awakening. While biographies typically focus on Whitefield’s failed relationship with Elizabeth Delamotte and his lackluster marriage to Elizabeth James, Kidd points to the importance of women in terms of their testimonies during revival, particularly at Cambuslang in Scotland; their support of the Methodist cause as shown by Lady Huntingdon; and the theological influence of female letter writers like the English Baptist Anne Dutton. Delightfully, Dutton receives particular attention as one who wrote affective devotional works used at the Georgia orphanage and whose letters Whitefield employed to consolidate the Calvinist wing of evangelicalism. As Kidd observes, Whitefield “did not balk at enlisting women such as Dutton to help him bolster his revival network.”

No biography is perfect, and even with this thoroughly researched and well-written book there are elements with which to quibble. One criticism is its length. When I first heard about Kidd’s research toward such a book, I envisioned something of the girth of George Marsden’s biography of Jonathan Edwards. I was surprised, then, when I discovered George Whitefield is only 325 pages long. While not detracting from the overall quality, at times it could have gone deeper. One example is the discussion of Whitefield’s conversion. This was a momentous event in Whitefield’s life and self-perception, one that has received some debate from historians. While Kidd offers helpful background information leading up to the conversion in his chapter on the subject, the actual “new birth” Whitefield experienced doesn’t receive as much detail.

This decision seems to follow Kidd’s general attempt to not get involved over scholarly debates, likely for the sake of maintaining a broader audience. For instance, he provides little in the way of discussions on the nature of revival, or what constitutes a Methodist.

My own historical interests explore questions of how to write church history; my specific area of study has been the work of Dallimore and his Whitefield biography. Over the years there has been wide testimony, with which Kidd agrees, about the importance of Dallimore’s work. As a result, people have asked me if Kidd’s work supersedes Dallimore’s. My reply is that the two complement each other; Kidd is to Dallimore on Whitefield what Marsden is to Iain Murray on Edwards. There are strengths to reading Dallimore—his two volumes are nearly three-times the size of Kidd’s and thus include more information for the reader. Yet Dallimore often lapsed too strongly in his admiration for Whitefield, and his prose tended to be too flowery. While not giving all of the same detail, Kidd uses his academic gifts in ways Dallimore could not. Kidd sets Whitefield in his broader 18th-century context, and he writes with tighter, less prolix style. While Kidd may not ultimately replace Dallimore’s major Whitefield biography, he might when it comes to Dallimore’s concise summary recently republished by Crossway.

Most assuredly Kidd has become the new standard, which is deserved when one considers the fresh research, clarity of style, and scholarly aptitude. And while Kidd does not overtly press home the ways that Whitefield’s life is a model or warning for Christian living, as Dallimore did, the lessons of the past are evident throughout the book. This is so particularly in Whitefield’s struggle with celebrity, and his ethical laxity in the case of slavery—his own valley of ashes. Thus Kidd’s biography proves to be an able entryway not only into Whitefield, but also into thinking about the usefulness of the past.

Ian Hugh Clary (PhD, University of the Free State) is a research and teaching fellow for the Andrew Fuller Center for Baptist Studies, and has taught at Redeemer University College, Heritage College and Seminary, and Munster Bible College. Most recently, he co-edited Pentecostal Outpourings: Revival in the Reformed Tradition (Reformation Heritage, 2016). Ian is also a minister at West Toronto Baptist Church. You can follow him on Twitter.