To date a half-dozen multiple-views books have appeared from Zondervan under the category “Church Life,” such as Understanding Four Views on Baptism. Four Views on the Apostle Paul brings to about 20 the number of volumes in the category “Bible and Theology.” (Other examples would be Five Views on Law and Gospel and Four Views on Hell.) These are not the dispassionate investigations of a single scholar assessing various views; they are the arguments of prominent advocates of contrasting views. After each writer weighs in, the others holding different positions reply with their agreements and disagreements.

Four Views on the Apostle Paul is further distinguished by substantial comments at the beginning (9–17) and end (211-216) by editor Michael Bird. These sections are particularly helpful since Bird, lecturer in theology at Crossway College and honorary research associate at the University of Queensland in Australia, resists the temptation to smuggle in a fifth view—his own. Rather, he seeks to enable readers “to make up their own minds on what was argued” (211), and accomplishes this in a way that is clear, succinct, and helpful.

The four scholars contributing to this volume are Thomas Schreiner (representing a Reformed Baptist perspective), Luke Timothy Johnson (Roman Catholic), Douglas Campbell (post-New Perspective), and Mark Nanos (Jewish). To facilitate crisp interaction, each contributor was asked to weigh in on four key areas. To keep this review at a manageable length, I’ll summarize each scholar’s response below.

1. What Did Paul Think about Salvation?

Schreiner, professor of New Testament at Southern Seminary in Louisville, emphasizes Christ’s substitutionary death for sinners. Johnson, professor of New Testament and Christian origins at Candler School of Theology in Atlanta, looks less to what sinners are saved from (their sin) and more to the liberation and transformation Christ grants them (though these aspects aren’t absent from Schreiner’s essay). Campbell, professor of New Testament at Duke Divinity School in Durham, North Carolina, speaks of God’s triune act that enables participation in Christ’s story. Nanos, distinguished scholar in residence at Rockhurst University in Kansas City, views Paul as highlighting the Gentiles’ need for rescue from their idolatry and immorality by means of Israel’s Messiah. 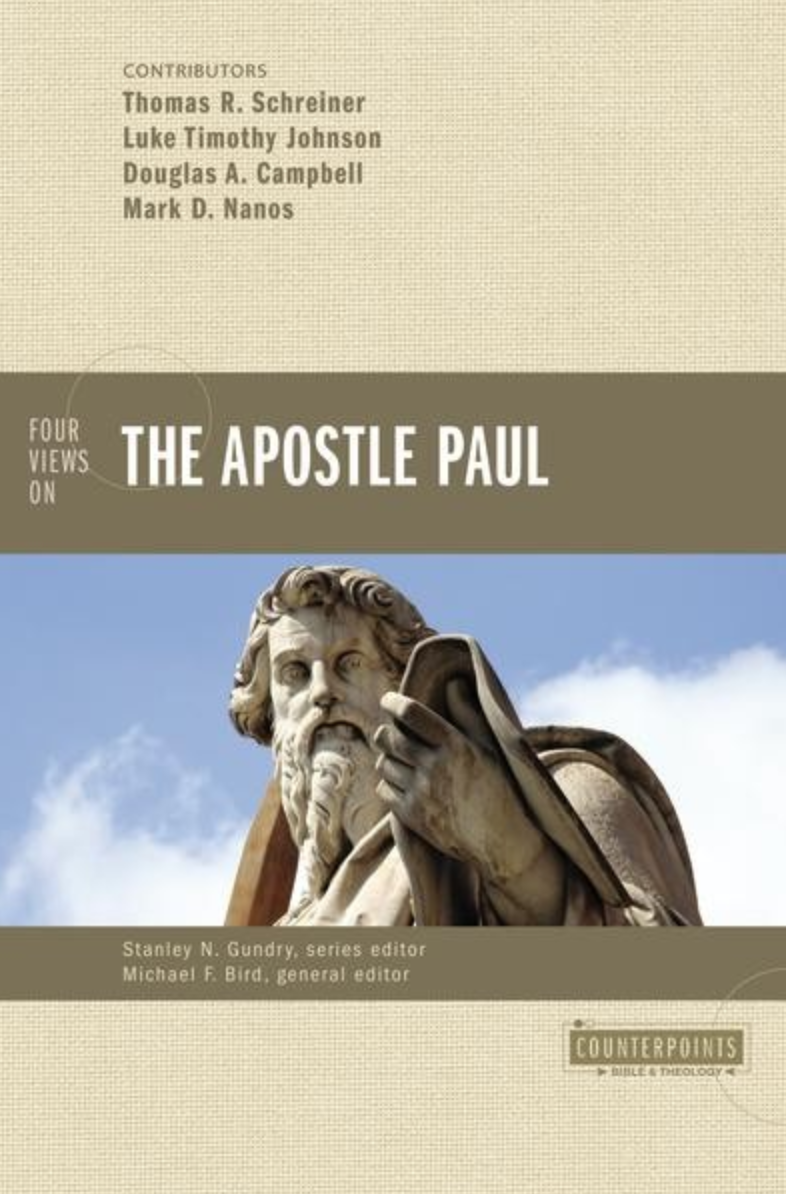 The apostle Paul was a vital force in the development of Christianity. Paul’s historical and religious context affects the theological interpretation of Paul’s writings, no small issue in the whole of Christian theology. Recent years have seen much controversy about the apostle Paul, his religious and social context, and its effects on his theology. In the helpful Counterpoints format, four leading scholars present their views on the best framework for describing Paul’s theological perspective, including his view of salvation, the significance of Christ, and his vision for the churches.

Bird aptly observes that “salvation” isn’t understood consistently by all four scholars (211–212). While Schreiner emphasizes the salvation of individuals, Johnson prefers new life and healing metaphors over forensic imagery. Moreover, Campbell articulates a complex and, to my mind, frustratingly diffuse answer that might imply everyone is already saved. (Did Paul think that?) Finally, Nanos proposes that salvation involves participation in “the Jewish communal way of life” (190). It is surely difficult to square Paul’s labor to present everyone complete in Christ (Col. 1:28) with Nanos’s proposal that the apostle’s aimed for everyone (within parameters) to become Jewish.

2. What Was Paul’s View of the Significance of Christ?

All four scholars agree on Christ’s centrality for the apostle Paul. Schreiner stresses Jesus’ divine lordship. Johnson highlights Jesus’ role as entrée to a new creation mode of experience. Campbell, whose debt to Karl Barth is profound, highlights Jesus’ revelational function in disclosing God. Nanos believes Christ is significant only for non-Jews who follow him—the group to which Paul felt called to minister. Jews, like Paul himself and Israelites of all times, are saved through covenant and Torah observance. Jesus is significant because his resurrection enables non-Jews to become “adherents of Judaism,” albeit not under Torah “on the same terms as those who are Israelites” (172).

3. What Is the Best Framework for Describing Paul’s Theological Perspective?

For Schreiner, while “the Pauline framework” incorporates the truths that “the new exodus, the new covenant, and the new creation have [already] arrived in Christ” (21), there remains a “not yet” to all Christ brings. Therefore, one of Paul’s “fundamental frameworks . . . is the already but not yet character of his eschatology” (22). For Johnson, religious experience—both that of Paul and of his readers—overshadows all else: “The matrix out of which Paul’s correspondence emerges is first of all not conceptual but existential, less a matter of abstract thought than of religious concern” (72). For Campbell, it is significant, as Bird observes, that “the matrix of apocalypticism explains the narrative and participatory dimensions of Paul’s theology” (212). But no less important for Campbell is what he takes to be Paul’s vision of God, in whom “there is a constant generous extension, giving, and embrace . . . [as God] stoops down to engage with even his enemies, shoulders their burdens, and rescues them. This is God’s nature. (The phrase missio Dei captures this and illuminates much else in Paul.)” (122). The apostle’s framework is dominated by this conception of missio Dei. For Nanos, Paul’s framework involves how Jesus makes it possible for non-Jews to join with “the family of the righteous ones”—that is, the Jews (190). Gentiles are “now obliged to observe fully the truth about how to live rightly (‘righteously’)—that is, by doing good works” (190).

4. What Was Paul’s Vision for the Church?

Schreiner’s depiction (41–47) is multifaceted but centers on believers’ continuity with Old Testament saints, unity in faith and mission, and indebtedness to Christ as head and sustainer and, through the Spirit, equipper. Johnson’s answer (89–96) is equally complex but focuses on ecclesiai as local assemblies occupying “a fragile place within their social world” (92). As those who comprise churches, believers are “to carry out the pattern of ‘life for others’ exhibited by Christ, seeking unity and reconciliation by means of those powerful and wise and wealthy becoming weak and foolish and poor so that others might become strong and wise and prosperous” (96). (Is the goal in the end, then, that everyone divests himself of being “strong and wise and prosperous”?) Campbell’s view isn’t that different in substance from Johnson’s: the church is “a community of ‘brothers’” (143). It is “an ethical community, facilitating both a liberating virtue and a virtuous freedom, and responding to the loving commands of its crucified and enthroned Lord to seek and to save the lost (or, failing this, to befriend them)” (143). I didn’t find it simple to distill Nanos’s answer to this question, so I’ll quote Bird’s summary: “For Nanos, he sees Paul as urging the churches (which are subgroups within the synagogue community) to live in light of the age to come while simultaneously promoting positive relations with non-Christ-believing-Jews” (213).

This is an important and telling book. In brief compass it characterizes understandings of the Pauline gospel, along with the hermeneutics and historiographies applied to Paul’s writings, across a wide expanse of Western Pauline interpretation today. This review has highlighted the core of each contributor’s conviction. Perhaps most gripping, however, are the fireworks observed in their interactions. As Bird notes, “The exchanges result in some big intellectual artillery being fired in four directions all at once” (16). Indeed. I plan to use this book in my own seminary class covering Acts and Paul, as it will not only inform students but also provide enough sharp argumentation to keep them engaged.

One question in conclusion: how could so much be written about Paul, “apostle of Christ Jesus,” and yet there be only one Gospel reference (Mark 11:22) in a nine-page Scripture index (217–225)? There is obviously more to say about Paul than even these four views could broach in a single compact book!