Here is the subtitle to Peter Enns’s new book: In Which I Explain How An Ancient, Ambiguous, and Diverse Book Leads Us to Wisdom Rather Than Answers—and Why That’s Great News. That rambling, whimsical description fits with the hokey front dust jacket, which sports three little hands pointing to a “Holy Bible.” The back cover promises “A Revolutionary New Way of Understanding the Mission of the Bible.” 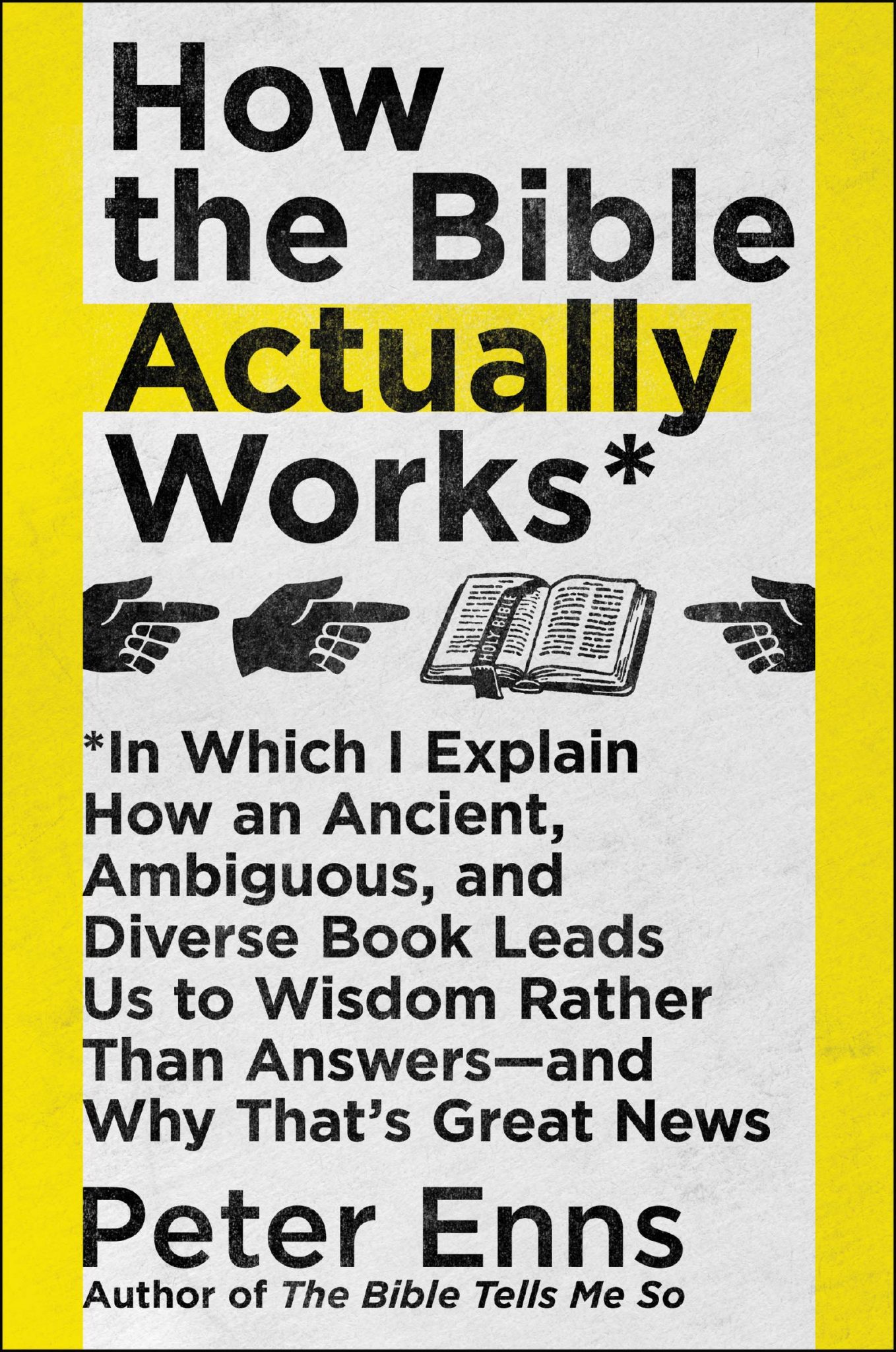 How the Bible Actually Works: In Which I Explain How An Ancient, Ambiguous, and Diverse Book Leads Us to Wisdom Rather Than Answers—and Why That’s Great News

How the Bible Actually Works: In Which I Explain How An Ancient, Ambiguous, and Diverse Book Leads Us to Wisdom Rather Than Answers—and Why That’s Great News

In How the Bible Actually Works, Enns—professor of biblical studies at Eastern University, St. Davids, Pennsylvania—argues that the mission of the Bible is to subvert much of what Bible-believing Christians through the centuries have thought about the Bible. If you’re such a Christian, you may think the Bible has answers to your questions. No, it rather reshapes the questions you ask. You may think Jesus fulfilled the Old Testament. No, New Testament writers just radically reimagined the Jews’ ancestral God and imputed beliefs about Jesus to him. You may think the Bible tells you what God is like. No, it just recounts what other people in other places and times thought about God.

“God” to us is who we imagine him to be. That’s all he can be, because we’re bound by our conceptual and cultural limitations, while God is beyond all human knowing.

Welcome to the conceptual world ushered in with a vengeance in the West more than 200 years ago with Immanuel Kant (1724–1804). It’s not clear why Enns gives the impression that he has just discovered this outlook. Since that time Christians have been pushing back against what became, and in Kant’s train remains today, methodological atheism in biblical studies. Enns simply embraces the thesis that the Bible’s God-talk is necessarily no more than futile ancient efforts (heavily redacted and embellished) to articulate the ineffable.

Christians the world over, especially in Africa and Asia and Latin America where Christianity is growing, hold that the Bible defies this thesis by claiming revelatory insights for its writers and culturally conditioned but transcendentally informed truth for its contents. But you won’t find in Enns’s treatment the international fellowship of robust Christian belief in Scripture as both a culturally located and also heavenly originated compilation of writings.

Enns simply embraces the thesis that the Bible’s God-talk is necessarily no more than futile ancient efforts (heavily redacted and embellished) to articulate the ineffable.

This a book that certainly needed writing, if Enns’s observation is true: “No one seems to be explaining the Bible in ways that would have helped me, my family, my friends, my students, and many others I have known over the last few decades” (17). Enns throws the benighted world of Christianity (which can’t explain its own Bible helpfully) a life ring in the form of this insight: “The God I read about in the Bible is not what God is like—in some timeless abstraction, and that’s that—but how God was imagined and then reimagined by ancient people of faith living in real times and places” (124–25, italics original). So we have “the sacred responsibility . . . to follow this biblical lead by reimagining God in our time and place” (125, italics original). Enns adds, “There. That pretty much sums up the entire book” (125).

Enns justifies the need for this book by setting up straw men. For example, in the quote above, who reads the Bible to think of God “in some timeless abstraction, and that’s that”? The Bible from Genesis to Revelation is clear that God is a person, not Aristotle’s Unmoved Mover. Nor do most people go to the trouble to open a Bible and read about God just to dismiss him. Or who views the Bible as “a once-for-all book of rules and static information” (167)? The core gospel message is that salvation is by grace through faith, not by keeping rules. The Bible itself polemicizes against sterile compliance with regulations (Mic. 6:6–7; Matt. 23:23). The Bible’s saving message is borne along on narrative, not plopped down as “static information.”

Product of Its Times

On the other hand, the Bible instantly becomes “static information” if it depicts no more than what ancient people thought, with no necessary authority for anyone reading it thereafter. Pity Jesus, who staked so much on what he read and applied from the Old Testament as the true and living written testimony of God (all just culturally bound metaphors for Enns).

If we strain out the straw men, false dichotomies, and parodied images of God-fearing Bible readers, Enns makes some valid points. Yes, Christ is wisdom (1 Cor. 1:30; see 11, 13, 205) to those who know, love, and follow him. Unfortunately, at least in this book, Christ’s contribution to practical thought and life decisions seems to overshadow his divine being and soteriological ministry. And since Enns downplays so much of the Bible as authoritative for the present, there isn’t much sure “wisdom” left there to define what “Christ is wisdom” might mean based on the Bible’s direct teachings.

Readers may reasonably infer from this book that “Christ” should now be thought of as the good and necessary “wisdom” we eventually arrive at in our struggles. On this view, the Bible doesn’t so much give us “Christ” understood as our personal Lord, our crucified and risen mediator at the right hand of God the heavenly Father, as it imparts a certain wisdom. The benefit I observe Enns trying to model is that we become ethically and perhaps cognitively more adept. But since so much of the wisdom Enns finds in Scripture arises from skepticism about what Christians have believed it to say, Enns has reduced the “wisdom” that he equates with Christ to skepticism toward (too) much found in historic Christianity.

The most culturally bound thinking imaginable is to look at the Bible and see no more in it than postmodern skeptical biblical scholarship permits.

“All our language of God, including that of the biblical writers, is inescapably enmeshed with how people of any time think and talk about anything—even as they speak of One who is not bound by time and place” (276). One wonders, then, why we even bother with the Bible. After all, even when it comes to Jesus, terms like “Lord, Savior, and bringer of the Good News of peace and grace,” just “[mimic] the language of the Roman Empire to speak of glorious Caesar as a means of pointing beyond Caesar” (276).

The apostle Peter claimed: “men spoke from God as they were carried along by the Holy Spirit” (2 Pet. 1:21). Enns holds: writers just mimicked the language of their culture.

This book is flippant with respect to what it dismisses (cognitive knowledge of God confirmed at key points by eyewitnesses and the social memory of the Abrahamic heritage, much of it faithfully and spectacularly recorded as Scripture) and shallow with respect to what it affirms: “Whatever any of us think about the Bible as God’s inspired word, it should make us step back and reflect for a moment that scripture itself portrays the boundless God in culturally bound ways of thinking” (276).

The most culturally bound thinking imaginable is to look at the Bible and see no more in it than postmodern skeptical biblical scholarship permits. If conveying that scholarship to a naïve and gullible college-freshman-level audience is the goal, the book communicates its message effectively.