Rarely will a reader be trampled by a herd of evangelicals stampeding toward the Abraham Kuyper section of the bookstore. Though there are a number of reasons (like the impediment caused by display stands full of Test-a-mints and Precious Moments figurines), perhaps no reason is more important than this: We Americans rarely read old books, and Kuyper’s books are old.

Kuyper lived in 19th-century Holland, served as a pastor, founded a Christian university, started a newspaper, served in Parliament and as the prime minister, and wrote influential books on theology, culture, and politics. His deepest convictions might be summed up in one sentence: Jesus Christ is Lord of all, and because of that fact, our allegiance to him should shape not only the private but also the public aspects of our lives. If Christ is Lord, he’s not just Lord over private spirituality and church attendance, but also Lord over public affairs like art, science, business, politics, economics, and education. Reading Kuyper got me started on the path toward viewing Christ’s lordship as directly relevant to public life.

I didn’t discover Lectures on Calvinism until I was living in Kazan, Russia, in the late 1990s. I was an embryonic theologue in my early 20s who’d spent my time reading books written in my own day by people just like me. Upon moving to Russia, however, I began to read old books, and Lectures on Calvinism was one of the first. It influenced decisively the way I think and live; I carry its ideas with me today each time I open my mouth to teach a class, pick up my pen to write an essay, or grab the remote to watch the news.

Kuyper’s Lectures on Calvinism is the published version of lectures he delivered at Princeton Theological Seminary in 1898. In the first two he comes out swinging against modernism, arguing that Christianity isn’t a mere compendium of systematic doctrines or facilitator of church order, but instead a world-and-life system whose teachings encompass every sphere of culture and facet of life. Just as God is the sovereign king over every square inch of creation, so his revelation provides a comprehensive frame of interpretation for everything in his world. In the next three chapters, Kuyper makes application to three cultural spheres: politics, education, and art. He concludes by pleading with Reformational Christians to apply their Christianity patiently to every aspect of their lives.

The book had such a profound effect on me because I’d been struggling with one question for the entirety of my life, to which Kuyper provided a compelling answer. My question was, “What does Jesus have to do with the 90 percent of my waking hours not spent in morning devotions, church attendance, or interpersonal witnessing encounters?”

This question nagged at me devotionally, as I tried to figure out how God’s saving works and word should shape my walk with him each day. It piqued my curiosity academically as I wondered what Jesus’s lordship had to do with my courses in art, science, or politics. It shaped my thinking vocationally as I tried to discern how God’s word should shape my future calling as a teacher and writer. It challenged me apologetically, as I wanted badly for Christ to be shown true in every public sphere of life, so that his name would be made great. 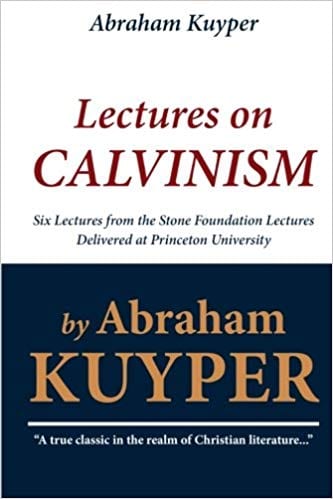 These are the questions Kuyper helped me resolve. He did so by arguing that God’s saving works and word are relevant at one level or another to the goings-on in society. He emphasized that God called creation (nature) into existence and ordered it by means of his word. And his ordering word still holds for all our life in the creational—or natural—realm. But another competing word is at work in the world, one that threatens the natural realm. If God’s creative and ordering word is his thesis for the world, sin is the antithesis. The natural realm is marked by a conflict between the two.

We can see this thesis-antithesis struggle in the biblical plotline itself. At creation, God instructs his imagers to be fruitful and multiply (a social command), till the soil (a cultural command), and have dominion over creation (a kingly command). After the fall, his imagers continue to live as social, cultural, and political beings, but their actions and interactions are shot through with sin and idolatry. As a result, all their doings are warped and misdirected.

Sadly, then, we’ve never had the chance to see untainted society, culture, or politics.

Our first parents, Adam and Eve, chose not to trust the word of God (his thesis), choosing instead to trust the word of the serpent (an antithesis). And since that fateful day, all of humanity has lived in the tension between God’s thesis and the evil one’s ever-present antithesis. This antithesis takes many forms, but in essence it’s any word spoken against God’s word, any misdirection of the natural world as God intended it. Although the created order remains good structurally (good in its existence and basic ordering), it has been corrupted and misdirected directionally (as sinners orient their activities toward idols rather than toward God).

God didn’t respond to the antithesis by destroying what he’d made, however, but by promising to renew it. Nature had become sick; grace was the cure. It’s true the body of creation had been shot through with poison—a poison extending to every sphere of human life, a poison running to our very core, a poison unto death. But God sent his Son as an antidote, to absorb sin’s curse and heal nature’s body. Christ’s death and resurrection promise he’ll one day liberate creation from its bondage, purifying creation of every corruption and misdirection (Rom. 8:19–22; Rev. 21:1).

This is salvation: purification, renewal, liberation, restoration, healing, and reconciliation. None of these terms implies a clean sweep, a replacement of one “bad” world with a newer and better one. Never are we told God will make all new things; instead, he will make all things new. The salvation God brings into this world transforms it from the inside out. God’s grace isn’t against nature; it doesn’t float above nature; and it doesn’t merely exist alongside of nature. God’s grace renews and restores nature, making it what he always intended it to be.

This means that for us as believers, we must be redirective in our social, cultural, and political activities. We seek to discern the ways sin and idolatry (antithesis) have corrupted and misdirected God’s design (thesis) for any given sphere of culture, and then explore the way God’s saving works and word can redirect that sphere away from idols toward the one true and living God.

As 21st-century evangelicals, our “takeaway” shouldn’t be a triumphalistic declaration that we’ll “transform” culture (a category bequeathed to Americans by a neo-orthodox theologian). If we’re able to achieve some level of transformation, then thanks be to God. But that’s not the goal. Any cultural transformation we see will be neither comprehensive nor enduring. It will, either quickly or slowly, fall on the dust heap of history, seemingly lost forever. If we aim to win a culture war, we’re likely to be disappointed and disillusioned.

But if we trust the victory Jesus has promised—that he has, indeed, already accomplished at Calvary—then our feeble acts of faithfulness will be resurrected. What we preview for the world today will become reality on that last day. The Lord Christ will finally transform us in the totality of our being, across the entire fabric of our lives.

In the meantime, we live in the midst of a cosmic struggle. As C. S. Lewis once said:

There is no neutral ground in the universe. Every square inch, every split second is claimed by God, and counterclaimed by Satan.

One day the struggle will end when our faith will become sight, when we’ll see in all its splendor Christ’s kingdom—a kingdom “of all ages, of all spheres, of all creatures.”

Kuyper’s Lectures on Calvinism, first published more than a century ago, reminds us of that ancient promise.