Tom Holland has written a book that is not so much a history of Christianity, but a history of the complex role Christianity played in the formation of modern Western culture. He rightly calls that influence “paradoxical” because, first, the Christian church has often spectacularly failed of its ideals, and other times it has been disastrously divided over what those ideals actually were. Holland—an award-winning historian of the ancient world, a translator of Greek classical texts, and a documentary writer—gives us all the gory details. He is no apologist for the church, despite his considerable respect for certain aspects of the Christian faith.

But the bottom line is this—it is hard to overstate the importance of Holland’s book Dominion: How the Christian Revolution Remade the World. The subtitle tells you the basic thesis. He makes a readable and extraordinarily well-documented case that the central values and priorities of modern, Western, secular culture have actually come from Christianity. And even now, when most of the educated classes have abandoned Christianity and when religion is in sharp decline among the populace, Christianity has such an enduring, pervasive influence that we cannot condemn the church for its failures without invoking Christian teaching and beliefs to do so.

The bottom line is this—it is hard to overstate the importance of Tom Holland’s book.

Only Way to Live

Holland offers a long but accessible exposition of a basic idea first proclaimed by Friedrich Nietzsche (1844–1900). Nietzsche saw the European intelligentsia rejecting Christianity and styling themselves as scientific freethinkers, supposedly living without God. But, he argued, they still believed in human rights, in the equal dignity of every person, in the value of the poor and weak, and the necessity of caring and advocating for them all. They still believed that love is the great value and that we should forgive our opponents. They still believed in moral absolutes—that some things are good and some things are evil—and particularly that oppression of the powerless was wrong.

But, Nietzsche argued, all these ideas were unique to Christianity. They did not develop in Eastern cultures, and the Greeks and the Romans found them laughable and incomprehensible when they first heard them. Holland shows that the shame-and-honor cultures of old, pagan Europe—of the Anglo-Saxons, the Franks, and the Germans—thought that the Christian ethic of forgiving one’s enemies and of honoring the poor and weak to be completely unworkable as a basis for society. These ideas would’ve never occurred to anyone unless they held to a universe with a single, personal God who created all beings in his image, and with a Savior who came and died in sacrificial love. The ideas only could’ve grown from such a worldview—they don’t make sense in a different one. If, instead, we believe we’re here by accident through a process of survival of the fittest, then there can be no moral absolutes, and life must be, if anything, about power and the mastery of others, not about love. That, declared Nietzsche, is the only way to live once you are truly willing to admit that the Christian God does not exist. 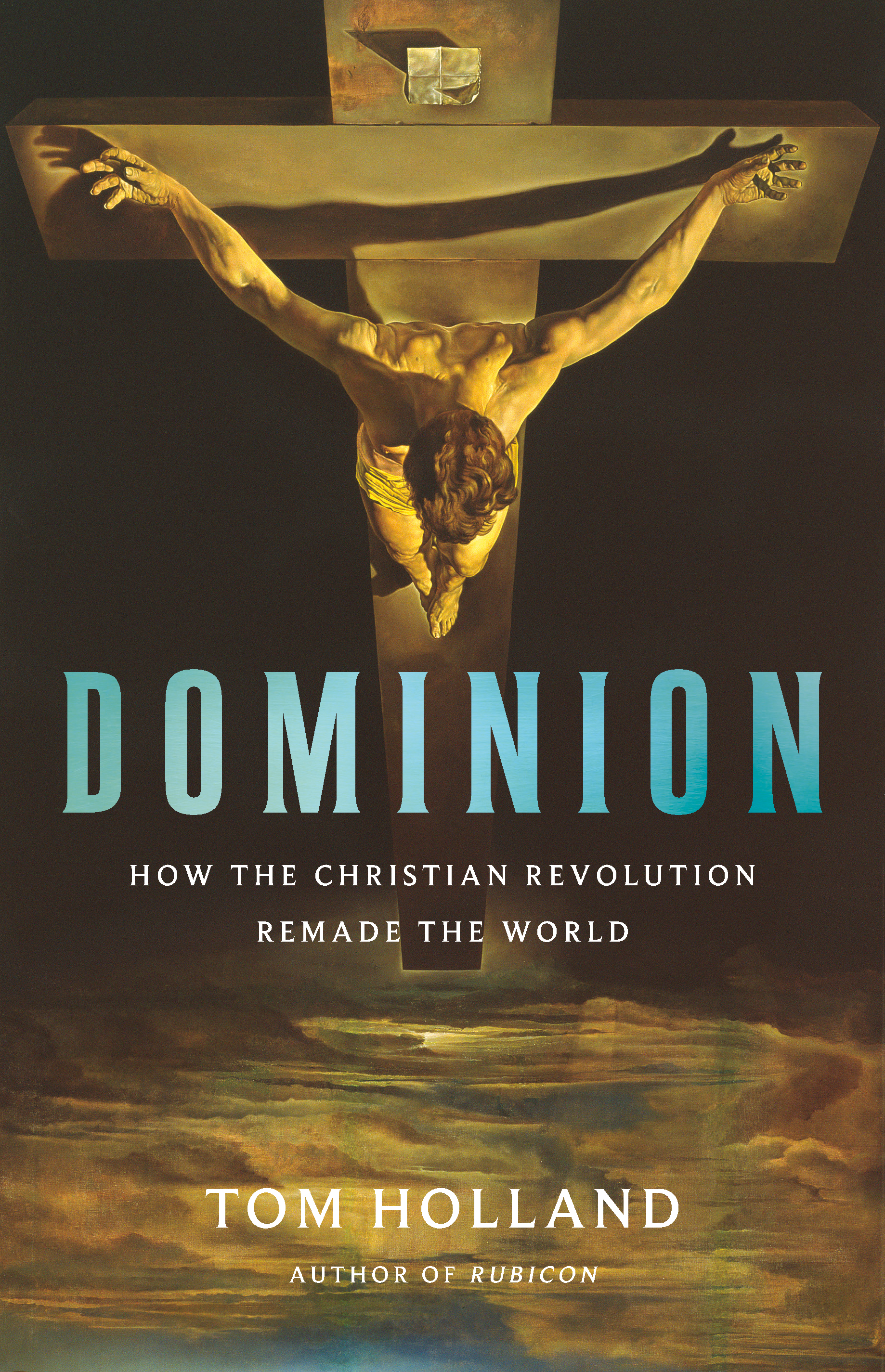 Dominion: How The Christian Revolution Remade the World

Dominion: How The Christian Revolution Remade the World

Basic. 624 pp.
Crucifixion, the Romans believed, was the worst fate imaginable, a punishment reserved for slaves. How astonishing it was, then, that people should have come to believe that one particular victim of crucifixion—an obscure provincial by the name of Jesus—was to be worshipped as a god. Dominion explores the implications of this shocking conviction as they have reverberated throughout history. Today, the West remains utterly saturated by Christian assumptions. As Tom Holland demonstrates, our morals and ethics are not universal but are instead the fruits of a distinctive civilization. Concepts such as secularism, liberalism, science, and homosexuality are deeply rooted in a Christian seedbed. From Babylon to the Beatles, Saint Michael to #MeToo, Dominion tells the story of how Christianity transformed the modern world.
Basic. 624 pp.

When Nietzsche made this argument he was dismissed as a madman. The liberal, secular world continued to spin out the narrative that only when we moved away from the dominance of the church—and put its superstition and bigotry behind us—was the modern world able to end slavery, discover human rights, empirical science, and sexual freedom.

But over the last 50 years, slowly but surely, leading academics have been proving Nietzsche right.

Brian Tierney of Cornell University showed that the idea of universal human rights and the equality of every individual was developed not by the philosophes of the Enlightenment but by Christian canon lawyers in the 12th century, based on Genesis and our creation in God’s image.

Kyle Harper of the University of Oklahoma has shown that the idea that every person has a right to his or her own body—and that therefore sex must be completely consensual—was a startling new concept that came into the world through Christianity. Historians (and Holland) tell how the last pagan emperor of Rome, Julian, sought to revive paganism in the face of surging, growing Christianity. But pagans despised the poor and weak, while Christians poured themselves out for the sick, orphans, the poor, and for abandoned infants. As a result, the masses turned to Christ. Such charity to the needy was unique to Christian faith.

Other scholars (and Holland) show that the birth of modern science depended on a Christian view of the world as real, not an illusion (as held in the East)—one created by a single mind to work on universal laws.

When it comes to the issue of slavery, the record of the church is mixed. Many Europeans conquered and colonized using the superiority of their Christian beliefs as a warrant. And of course much of the Christian church was complicit in the African slave trade. However, Holland points out a couple of facts accepted by most historians. One is that slavery had been a universally accepted reality everywhere in the world. So where did the idea that it was wrong originate? It originated with Christians such as Gregory of Nyssa reading what the Bible said about the image of God. The second is that, while emancipation and abolition came too slowly, it was spearheaded by Christian groups like the Quakers.

Holland, though, wants to show that even when people try to distort Christianity and use it as a warrant for abuse and exploitation, it has a power in it that backfires on the oppressors:

Repeatedly, whether crashing through the canals of Tenochtitlan, or settling the estuaries of Massachusetts, or trekking deep into the Transvaal, the confidence that had enabled Europeans to believe themselves superior to those they were displacing was derived from Christianity. Repeatedly, though . . . it was Christianity that . . . provided the colonized and the enslaved with the surest voice. The paradox was profound. No other conquerors, carving out empires for themselves, had done so as the servants of a man tortured to death on the orders of a colonial official. No other conquerors . . . had installed . . . an emblem of power so deeply ambivalent as to render problematic the very notion of power. (504)

There are too many other great stories and gems of insight in Holland’s book to document here. We learn that the idea of hope—of belief in historical progress moving toward greater justice and peace—is a uniquely Christian idea. Indeed, the very idea of the separation of church and state, unknown in other cultures, was a concept not pushed on the church by the secular world, but was originally developed by Augustine and is grounded in the fact that Christianity is culturally flexible, not dictating in detail how people must, dress, eat, live, and work. Holland even argues the #MeToo movement was a recapitulation of the original Christian sexual revolution that demanded no sexual double standards for men.

Only at the very end, and then only briefly, does Holland pose a question that hangs over the entire book. If it’s true that these humanistic values originated out of Christian beliefs, will not these values make less and less sense—become less and less compelling—in a society that’s abandoning the beliefs? Holland puts it like this:

If secular humanism derives not from reason or from science, but from the distinctive course of Christianity’s evolution—a course that, in the opinion of growing numbers in Europe and America, has left God dead—then how are its values anything more than the shadow of a corpse? What are the foundations of its morality, if not a myth? (540)

Holland leaves the question hanging. This is not asking if individual secular people can be highly moral and unselfishly committed to others. Of course they can. It is asking whether, on the whole, an entire society can stay committed to values after abandoning the beliefs about the world on which the values were based.

Tom Holland punctures common myths about Christianity and secularism in every chapter.

Some—such as Christian Smith in Atheist Overreach, and Charles Taylor in both Sources of the Self and A Secular Age—doubt that these values will be able to endure as Christianity weakens. Robert Bellah in Habits of the Heart makes the same argument.

Can we stay committed to humanistic values as we more and more abandon belief in God? Atheist George Sciallabba, in reviewing Taylor, explains why that question should at least unnerve us:

Perseverance in virtue will sometimes require self-sacrifice. And self-sacrifice seems to require some transcendental justification or motivation, of which the most common, and perhaps the most logical, is belief in the existence of God. Or so Taylor argues, circumspectly. Since modern freedom entails the rejection of transcendence, modern virtue is wholly contingent. Can we be good for long without God? Taylor’s doubts are daunting. And there is the quick of my discomfort: the suspicion, powerfully and plausibly albeit tactfully and tentatively expressed, that the ideals I most prize are at bottom inadequate. I confess I see no alternative to living with this suspicion, perhaps permanently.

Tom Holland punctures common myths about Christianity and secularism in every chapter. In no way does he let the church off the hook for its innumerable failures. Nor will he let secular people live with the illusion that their values are just self-evident, the result of reason and scientific investigation.

If both sides would allow themselves to be chastened by Holland, future conversations will be much more fruitful, and more tethered to reality.