Count me among those who think pastors and other ministry leaders cannot read too much Lesslie Newbigin (1909–1998). He was one of the most important theologians of the 20th century, but unlike some others who might be similarly labeled, Newbigin’s insights seem increasingly relevant two decades after his death. According to biographer Geoffrey Wainwright, much of Newbigin’s thought proved prescient and continues to “touch directly and powerfully on several of the most lively issues facing churches and theologians” (27–28).

A native of Scotland, Newbigin served as a missionary to India for four decades and as a leader in the mid-century ecumenical movement. In his “retirement” years, Newbigin returned to the U.K., becoming a lecturer at Selly Oaks Colleges and pastoring an inner-city church in Birmingham. Though Newbigin published widely throughout his life, it was in his final two decades that he wrote his most influential books, most of which wrestled with the reality that his native Britain, with its millennium-and-a-half of Christian history, had become post-Christian. He argued that Western culture is now just as much a mission field as those parts of the world that have been influenced minimally by Christian faith.

Like Newbigin, Michael Goheen—professor of missional theology at Covenant Theological Seminary in St. Louis, Missouri—is a theologian deeply committed to mission. His own writings on missional theology, the grand biblical narrative, Christian worldview, and philosophy have been formed significantly by Newbigin’s thinking on these issues. Goheen’s unpublished dissertation and many published essays on Newbigin rank him among the latter’s ablest interpreters. The Church and Its Vocation: Lesslie Newbigin’s Missionary Ecclesiology is a more popular revision of portions of Goheen’s dissertation and is the first of two planned books on Newbigin’s thought and its legacy. 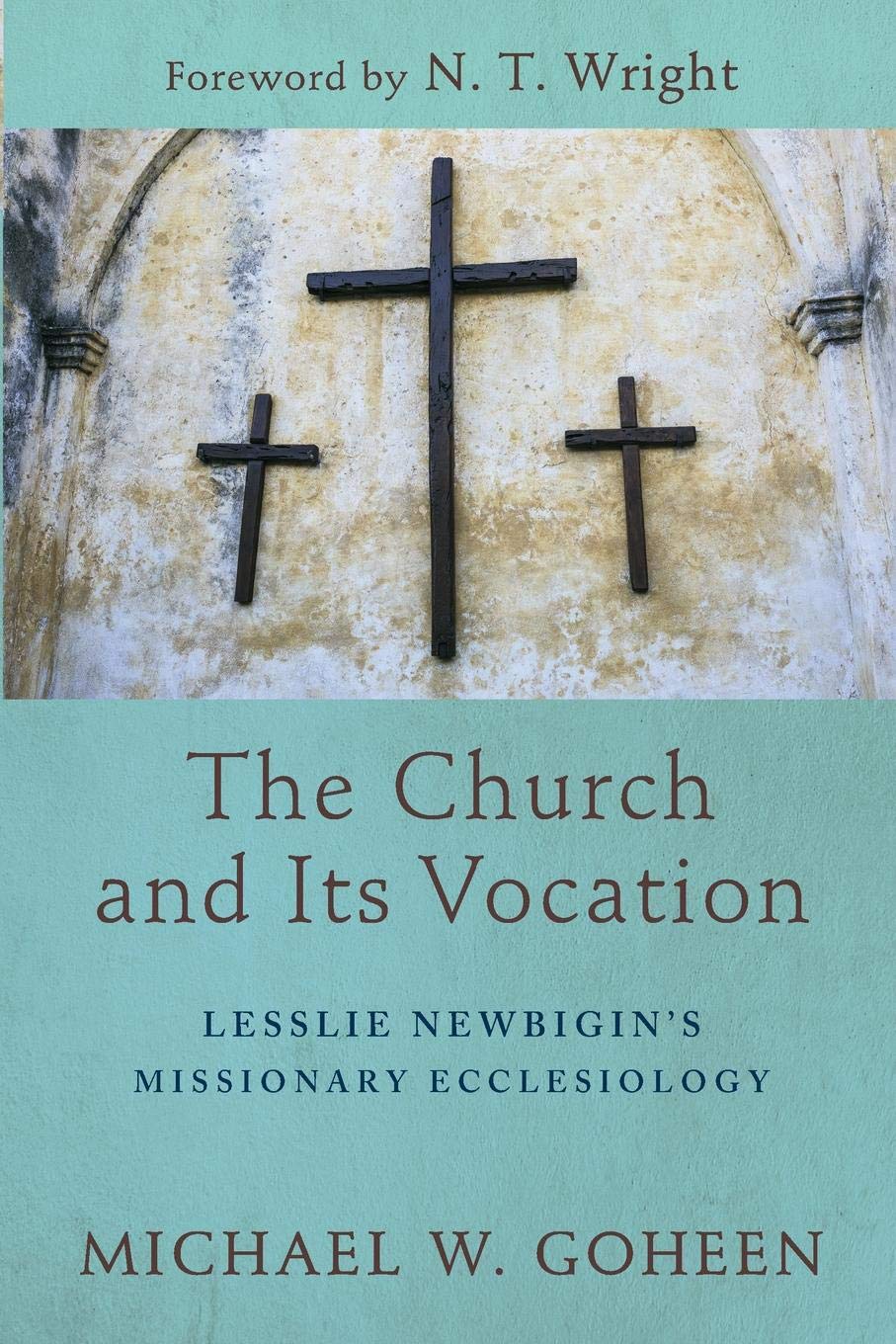 Lesslie Newbigin, one of the 20th century’s most important church leaders, offered insights on the church in a pluralistic world that are arguably more relevant now than when first written. This volume presents his ecclesiology to a new generation. Michael Goheen clearly articulates Newbigin’s missionary understanding of the church and places it in the context of Newbigin’s core theological convictions. Suitable for students as well as church leaders, this book offers readers a better understanding of the mission of the church in the world today.

Goheen offers a critical-but-appreciative overview of Newbigin’s thought. He argues that Newbigin’s ecclesiology was formed by a “gospel dynamic,” a commitment to the idea that the good news drives how one should think about the nature of the church (8). Within this gospel dynamic, Newbigin returned to four themes over and over again in his writings. First, the gospel is the announcement that God’s kingdom has broken into the created order through the saving work of Jesus Christ. Second, the gospel only makes sense within the context of the biblical story, which is in fact a cosmic narrative. Third, throughout history God has always worked through a particular people whom he has chosen by grace. Finally, this election is missional in nature, as God’s people have been set apart to proclaim the gospel in word and deed.

According to Goheen, these themes of gospel, story, missional people, and missionary encounter with culture aren’t isolated concepts, but “are intertwined, and each requires the others in order to be properly understood” (9). Goheen expounds these overlapping themes chapter by chapter, before concluding his book with recommendations for the contemporary church. Goheen clearly finds Newbigin’s vision compelling, though he is willing to be critical when he thinks Newbigin’s thought is underdeveloped or less helpful. The Church and Its Vocation serves as an excellent introduction to major themes in Newbigin’s thought, and it should inspire many to read Newbigin’s writings and learn from the great missional theologian himself.

How to Read Newbigin for All He’s Worth

Like Goheen, my own thinking has been shaped profoundly by Newbigin’s missional theology. I agree with Bruce Ashford that evangelicals have much to learn from critical engagement with and application of Newbigin’s thought. To that end, I’ll offer some brief reflections on where I think he is particularly helpful for ministers in my own tribe: conservative evangelicals with a high view of Scripture and a deep appreciation for the Reformation and its continuing legacy.

I recommend reading Newbigin as a selective refinement of core evangelical convictions and emphases. This is an important qualification to make because Newbigin wasn’t a self-confessed evangelical, and he disagreed with ministries like The Gospel Coalition on matters such as biblical inerrancy, penal substitutionary atonement, and inclusivism. He positioned himself as a sort of balanced middle between evangelicalism and liberalism, and he was influenced far more by Neo-Orthodoxy (in his early years) and Alasdair MacIntyre and Hans Frei (in his later years) than he was the reformers or evangelical theologians. Newbigin occupied theological real estate on the right wing of mainline Protestantism, making him a fellow traveler with evangelicals, though never a card-carrying member of the club.

Newbigin occupied theological real estate on the right wing of mainline Protestantism, making him a fellow traveler with evangelicals, though never a card-carrying member of the club.

With this caveat in mind, Goheen’s book highlights several “Newbiginian” themes that can be introduced as healthy mutations into evangelical DNA. For the sake of space, I will recommend four. None of these themes is unique to Newbigin, but in him they find a coherence that is worth emulating.

First, Newbigin helpfully argues that mission is a mark of the church, and that it’s a more comprehensive category than missions. Crosscultural evangelism and church planting are crucial, and Newbigin was deeply concerned that these priorities were being eclipsed among mainline Protestants. However, the church also bears witness to the gospel’s power through deeds that tease out the implications of the good news, particularly acts of mercy, justice, and peacemaking. This missionary vocation applies to the church universal, though it is embodied in local churches as they embrace missional priorities appropriate to their particular contexts.

Another way Newbigin refines evangelical emphases is his corporate and missional understanding of election. Among conservative evangelicals, there is a centuries-long family squabble about whether election is unconditional and guarantees faith or is conditioned on God’s foreknowledge of freely chosen faith. This is an important conversation, to be sure, but Newbigin rightly reminds us that election is also Christocentric, corporate, and for the sake of mission. Greater attention to these themes can help unite evangelicals, or at least take some of the edge off of our debates over election. It also has important ramifications for how we articulate the reformational doctrine of vocatio, where every believer is a minister called and gifted for kingdom work within the spheres of their particular vocations.

The gospel is a kingdom announcement with cosmic implications and not just a message of personal salvation for individual sinners.

Newbigin also refines evangelical convictions with his insight that Scripture itself is a cosmic narrative that transcends both the various biblical genres (which are important) and particular biblical-theological paradigms (which are often useful). Whether one reflects on poetry or the prophetic, or gravitates to redemptive-historical or intertextual interpretation, Scripture as a whole presents us with the true story of the whole world. It offers an alternative worldview in the truest sense to every competing narrative in every human culture. Our individual stories only make sense when they’re interpreted within the context of this Story of Stories.

Finally, Newbigin offers a needed reminder that the gospel is a kingdom announcement with cosmic implications, not just a message of personal salvation for individual sinners. While one could argue Newbigin swings too far in the direction of the former, at least in his writings, that isn’t the temptation facing most conservative evangelicals. We need reminding that the good news isn’t only about saving me from my sin, but that the entire created order will one day be redeemed and shalom will be restored, all on account of the finished work of Jesus Christ. This thick account of the gospel is too often downplayed, or even ignored completely, in evangelical popular theology.

Lesslie Newbigin was a gift to the church. I’m thankful Michael Goheen has gifted us with this excellent introduction to Newbigin’s thought. Pastors and other ministry leaders should read The Church and Its Vocation, then take the plunge and read Newbigin himself.