When gay marriage became the law of the land in 2015, huge swaths of the country welcomed President Obama’s decision to light the White House in the colors of the rainbow with joy. That poignant moment in America’s life was made all the more powerful by the speed with which it happened. Only seven years earlier, on the night when Obama was first elected president, California had passed a proposition that effectively banned gay marriage.

Yet the transformation in those seven years was superficial: most Americans had already accepted and embodied the intuitions and premises required to make gay marriage a reality—only they hadn’t realized it. What seemed to be an overnight transformation of marriage was only the most spectacular manifestation of a decades-long reconfiguration of how our society orders our most intimate relationships. We are often unaware of the extent to which a marriage culture forms—or deforms—us, until those changes bubble up to the surface as they did in Obergefell v. Hodges.

What the future of marriage holds now, and how Christians should respond, are among the most pressing questions we face today. Yet to navigate an often insidious culture of dating and romance, we need to understand its contours. No author has mapped them so thoroughly in recent years as Mark Regnerus, a sociologist at the University of Texas. In his latest volume, The Future of Christian Marriage (listen to Regnerus’s TGC Gospelbound interview), he excavates the subterranean convictions and attitudes about marriage that Christians both in America and around the globe have adopted. 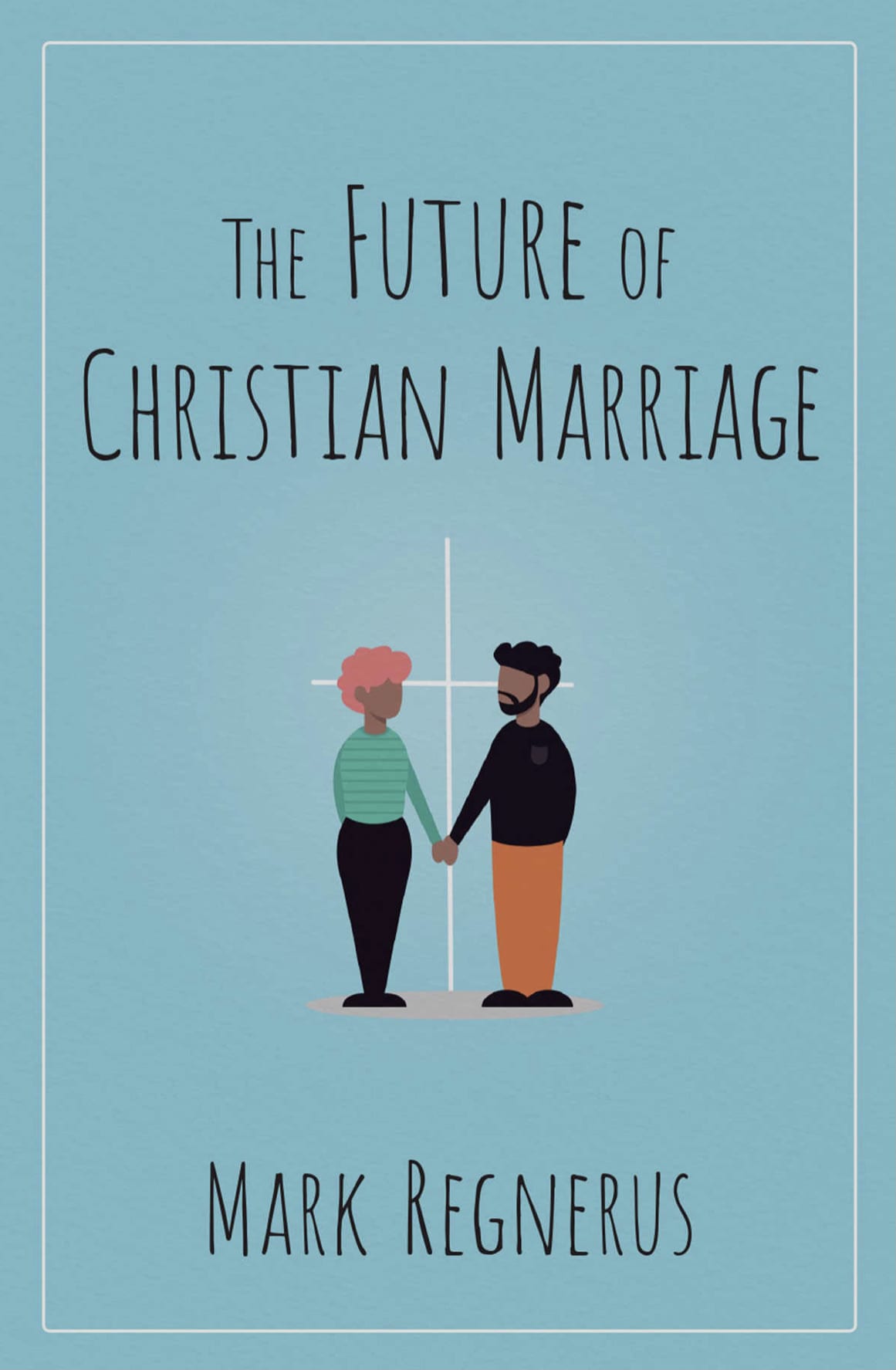 The Future of Christian Marriage

The Future of Christian Marriage

What the future of marriage holds now, and how Christians should respond, are among the most pressing questions we face today. Yet to navigate an often insidious culture of dating and romance, we need to understand its contours. No author has mapped them so thoroughly in recent years as Mark Regnerus, a sociologist at the University of Texas.

Though it’s tempting to expect an unremittingly bleak portrait of how Christians think about marriage, not all the news is bad. As Regnerus recounts, many young Christians had a relatively well-formed account of marriage. While there are variations in answers about what constitutes marriage across denominations, Regnerus found “no evidence whatsoever” that young Christians have “radical ideas to intentionally undo marriage in favor of some other norm for organizing intimate relationships.”

Many young Christians also understand that marriage has a divine purpose, that it requires sacrifice, and that it involves building a household with children. The ideals at the heart of Christian marriage are more durable than we might think.

What has changed are young people’s expectations for marriage. Following Andrew Cherlin, Regnerus argues that marriage is now largely perceived as a “capstone” rather than a “foundation.” Instead of a relationship that might help a couple fulfill their aspirations, marriage is now “something individuals aspire to.”

The “capstone marriage” is a status symbol, which is entered when a person is already fully formed and economically stable: marrying while poor was never easy, but now it’s inconceivable. As Regnerus distills the view, marriage is “becoming an elite, voluntary, consumption-oriented, and oft-temporary arrangement” that is suffused with unreasonably high expectations about what it can deliver emotionally.

Regnerus disentangles the various interlocking threads of our marriage culture in order to show how the capstone model has reshaped our marriage practices. At the heart of marriage, he contends, lies an exchange of resources that creates interdependence between persons. The economic imagery is deliberate, and illuminates a variety of dimensions of relationships between the sexes—and their unavoidably asymmetrical interests. For instance, Regnerus suggests that without easily available sexual satisfaction, the “capstone vision of marriage would collapse.” As Regnerus describes the sexual “market,” “women have what men want.” Sex becomes “cheap” when women demand little in return for it—when access to sex is easy.

The corollary of cheap sex is that abstinence and marriage become more costly. As long as abstinence is rare within a social circle, not participating in the sexual market alienates a person from peers—and creates pressure to participate in the sexual economy. This problem is especially acute for Christian women when they outnumber marriageable young men: the imbalance means that such men have even more power to set the terms for a relationship than they do outside the church.

While it’s tempting within many Christian circles to decry men’s captivity to video games and other juvenile activity, Regnerus observes that within the terms of the market they are acting reasonably: as long as they enjoy easy alternatives to marrying—like cohabitation, sex, or pornography—entering into a monogamous, lifelong union will appear unreasonable.

While readers might blanch at the idea of understanding relations between the sexes in such starkly economic terms, there is nothing in Regnerus’s description of how such markets work that could not also be found in Jane Austen or Anthony Trollope—whose narrative depictions of the Victorian “marriage markets” in many respects mirror ours, though they were more aware of the dynamics at work within such relationships than we are.

Yet changes to the institution of marriage are only symptoms of a much deeper and more pervasive disease. We are now in an “advanced stage of atomism,” Regnerus writes, which began well before divorce laws were changed or gay marriage became a reality. Extreme individualism has displaced “familism,” a social structure in which “the family is prioritized over the individual in practice, norm, and law.”

Changes to the institution of marriage are only symptoms of a much deeper and more pervasive disease.

Though we might be inclined to think that the dissolution of broader cultural norms will strengthen our Christian witness, Regnerus’s work demonstrates that Christian communities have hardly been immune to the acidic qualities in the marital atmosphere around us. The question for the future of Christian marriage is how we set about retrieving and embodying practices that can resist the atomizing effects of our world and the distorted expectations for marriage that they engender.

Do More Than Focus

The paradox of renewing a culture of marriage is that Christians must look beyond marriage and family to do it. In the 1980s and ’90s, conservative evangelicals sought to counteract the decline of marriage directly by focusing on the family. Yet such a narrow focus distorts the moral field: “familism” might be an antidote to atomism, but pursuing it directly is no way to bring it about.

While Scripture doubtlessly presumes a moral world nearer to that which “familism” names than our isolated individualism, it also challenges that vision: Christ’s call to set aside fraternal bonds and follow him chastens us from giving family more weight than it deserves within the kingdom of God.

Christians concerned about marriage must look beyond it, toward practices that effectively counteract such individualism in every context. Regnerus endorses something like Rod Dreher’s Benedict Option communities, insofar as such subcultures tend to be “marriage friendly.” Yet as he notes, marriage is a “common byproduct of involvement in them”—rather than the main theme.

Regnerus endorses something like Rod Dreher’s Benedict Option communities, insofar as such subcultures tend to be ‘marriage friendly.’

Yet Christians might also consider avoiding the sharp antithesis between the romantic, emotionally oriented values embedded within the capstone model of marriage and the more pragmatic, mundane vision at the heart of the foundational model. Young people need more than throat-clearing affirmations of the goods of love and romance before being subjected to treatises on how the nature of marriage is one of commitment and sacrifice.

Persuasion begins in the affections, and if we’re to revalue marriage we’d do well to show how fidelity and sacrifice are the consummation and completion of romantic virtues and longings. Re-enchanting the world through marriage demands showing how the mundane aspects of building a home and community are more dramatic, adventurous, and satisfying than any dating-to-marriage story could be.

That vision must especially account honestly and unflinchingly about the risks at the heart of marriage—and the reason they are worth taking. As Regnerus observes, many young people have an acute sense of the uncertainties of relationships. For children and grandchildren of divorce, the stability of marriage itself is in question, while online matchmaking has drastically increased the sense of competition for spouses. Throw in economic instability, and the rising cost of marrying and cohabitation begins to seem like a reasonable way to manage uncertainty without the ordinary risks that come from marrying.

Somehow, in our pedagogy of marriage churches must be candid about the hazards of marrying while still forming young people to prefer it. No community can manage that trick successfully without investing resources in helping marriages thrive if they are at risk.

Start Us on the Task

More could be said about our Christian responsibilities to restore vitality to marriage—but Regnerus has said enough to start us on the task. Embodying the Christian vision of marriage when atomism prevails, without reifying a certain idolatry of the family, is the task that lies before us as Christians.

Subverting the atomism that undermines marriage begins with seeing how our imaginations have become captive to it—and in the realm of marriage and family, few books demonstrate that as well as The Future of Christian Marriage. How we form communities that effectively counteract that atomism is up to us.

Matthew Lee Anderson is an assistant research professor of ethics and theology at Baylor University’s Institute for Studies of Religion. He founded Mere Orthodoxy, and is the author of two books. Read more at matthewleeanderson.com or follow him on Twitter.
Get Our Latest Book Reviews Delivered