America is in crisis: our “communities are collapsing, and people are feeling more isolated, adrift, and purposeless than ever before.” We are, Nebraska Senator Ben Sasse argues in his latest book, Them: Why We Hate Each Other—and How to Heal, “literally dying of despair.” Massive economic and technological upheavals have increasingly isolated individuals, hollowing out the three “local tribes” that “give us true, meaningful identity—family, workplace, and neighborhood.”

A media that preys on discord and polarization has rushed into the vacuum where “that hometown-gym-on-a-Friday-night feeling” once lived, sorting us into anti-tribes and factions, in which we’re “defined by what we’re against rather than what we’re for.” Partisan tribalism is “statistically higher than at any point since the Civil War,” as we “soothe our lonely souls with the balm of contempt” toward those we disagree with but do not understand.

Sasse’s diagnosis of America’s social fragmentation is unsparing, and if “literally dying of despair” seems overwrought, Sasse is ready to supply the statistics to show he’s not making up these problems. He also supplies personal anecdotes to contextualize all that data and give readers a sense of the communal life that’s disappearing.

Little in Sasse’s decline-narrative will be new for those who have read their Robert Putnam, Yuval Levin, or other contemporary imitators of Alexis de Tocqueville. It’s made up of quotes from classical sources, anecdotes, and data lamenting a bygone era. The social sciences do most of the heavy argumentative lifting here, which results in what Helen Andrews calls “bloodless moralism,” that is, “moral questions are treated as if they were, at the end of the day, merely empirical.” The form of argument itself may be indicative of the decline Sasse worries about: Without any kind of shared educational tradition, our public discourse hangs on assembling a bricolage of numbers and personal vignettes.

Still, Sasse does an admirable job of tying the many threads of decline into a compelling narrative. Them is American bloodless moralism at its finest, which proves both useful and also good (if limited). As a sweeping narrative about American society, it has to overlook some details, and critics will find plenty to question—yet when many people have a sense that society is in upheaval, giving them a story to help them live better through it is an important task.

Sasse is known for offering digestible civics lectures, which are often infused with an aspirational description of American life that borders on unhistorical romanticism. This aspirational Americanism and pleas for civility that animate Sasse’s public presence pervade Them. While the book might seem at points like a nostalgic lament, Sasse also has deep convictions about the resilience of American ideals and the American people. Sasse, we might say, is afflicted by these changes without being crushed, perplexed but not despairing.

Despite the sweeping panoramic of Sasse’s story of decline, his prescriptions are surprisingly individualized: we need to change “habits of the heart” in order to set the conditions for social change. There’s a great deal of wisdom in Sasse’s counsel about setting limits on technology usage, and I was delighted beyond words to read a sitting senator advocate for buying a cemetery plot to acknowledge our bodiliness, mortality, and communal bonds. 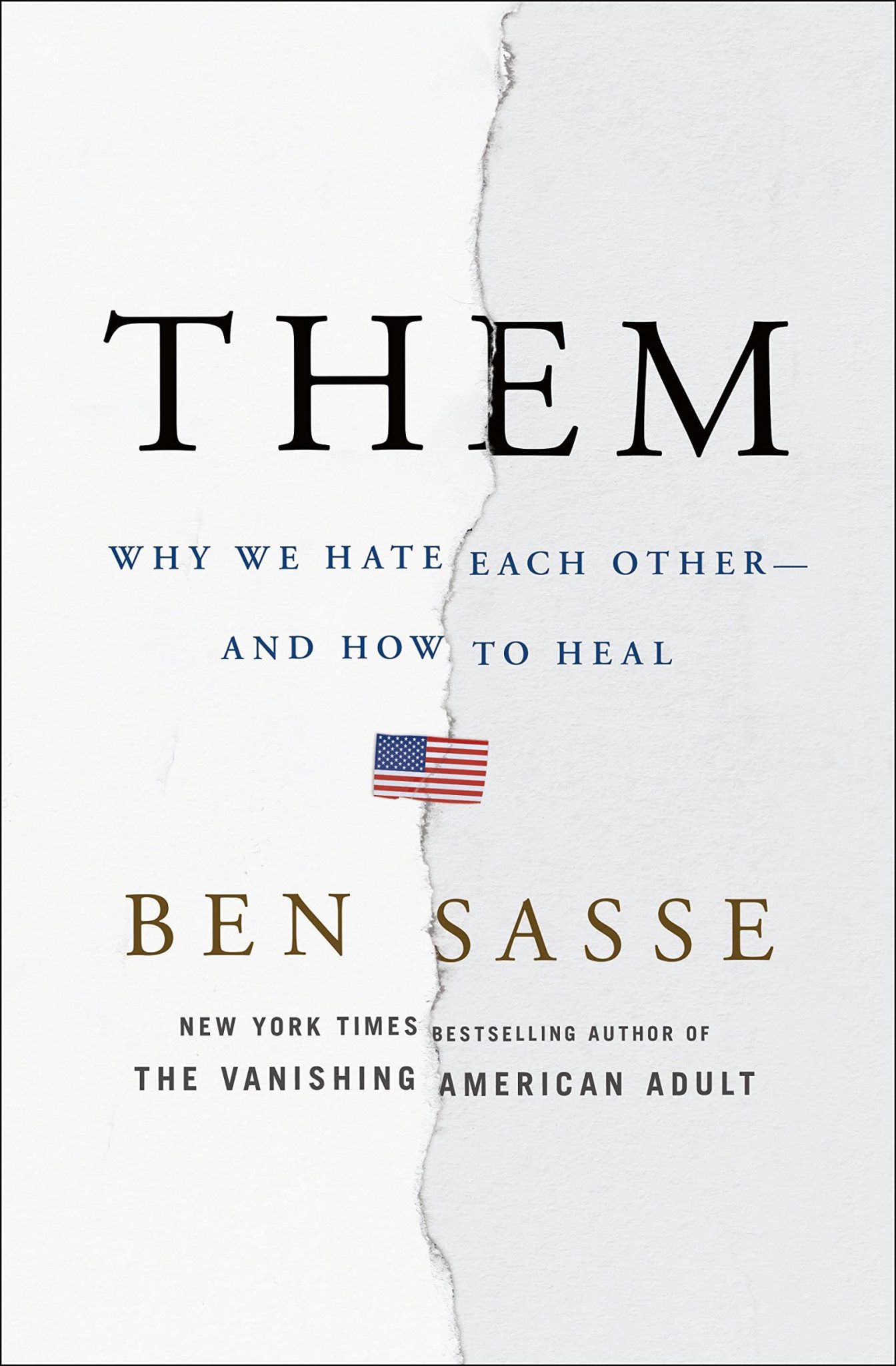 Them: Why We Hate Each Other—and How to Heal

Them: Why We Hate Each Other—and How to Heal

As traditional tribes of place evaporate, we rally against common enemies so we can feel part of a team. No institutions command widespread public trust, enabling foreign intelligence agencies to use technology to pick the scabs on our toxic divisions. We’re in danger of half of us believing different facts than the other half, and the digital revolution throws gas on the fire.

There’s a path forward—but reversing our decline requires something radical: a rediscovery of real places and human-to-human relationships. Even as technology nudges us to become rootless, Sasse shows how only a recovery of rootedness can heal our lonely souls.

Role of the Church

The sources of social fragmentation that beset us are so many that any response will be partial and fragmentary. Even so, Sasse says nothing about the church in either his narrative of decline or his prescriptions. It seems impossible to tell the story about decaying American civic life without including the demise of mainline Protestantism, which functioned as a (highly problematic) bulwark against America’s pluralism devolving into warring factions.

But it also seems impossible to imagine a renewed sense of civic concern without it being connected, somehow, to a recommitted Christian community. It’s understandable that a sitting senator would be apologetic about even coming near to theological claims; people still are eager to decry “theocrats” in our midst. But if America’s problems are spiritual, the renewal must be equally so—and a spiritualized conviction about “America,” untethered from a more fundamental commitment to the kingdom of God, can only generate the kind of romanticized nationalism that will throttle the renewal Sasse seeks.

Ben Sasse’s diagnosis is helpful, if nothing else, for making churches alive to the task before us.

Sasse’s diagnosis is helpful, if nothing else, for making churches alive to the task before us. And to take a cue from his odd commendation to buy a cemetery plot, churches might consider reviving the practice of church graveyards and burials for the indigent. Such practices might seem like lavish wastes of money, but they also bind the church to time and to the land in ways that remind the surrounding communities of their own mortality and limits. And if our churches, who have reasons to do this that no one else has, won’t bear witness to the body’s limits in this particular way, who will?

Besides such eccentric responses, churches might read Sasse’s book with an eye toward countering the media-saturated “anti-tribes” by providing occasions for dialogue among competing outlooks that aren’t specifically tied to religious belief. Some churches in the mid-2000s gained notoriety for hosting dialogues inside of bars—which is precisely the kind of opportunity for ongoing friendly argument and persuasion that local communities need. Such practices seem impossibly irrelevant against the tidal wave of polarization, yet wasting time on the seemingly insignificant is precisely what Christianity does.

Churches have an opportunity to unabashedly announce the message of the gospel and becomes centers for responsible and charitable civic pluralism, two tasks that are inherently complementary and urgently necessary. Additionally, if countering the “anti-tribes” requires deepened commitment to the value of the local church, then Christian communities might participate in their renewal by declining to make podcasts or services available to others who use them as substitutes for their own corporate worship experiences or local conversations.

Other responses by churches will doubtlessly be demanded, if they’re to play their part in renewing America’s civic life.

Part of the burden of Sasse’s book is to point toward a path forward, but to leave it underdetermined. If the reversal of our social fragmentation is to occur, some experimentation might be necessary—and many failures will be inevitable. The story of America that Sasse tells is an imaginatively potent one: if a romanticized, aspirational Americanism has dangers, it also has the prospect of making us alive to what our communities might yet become.

If a romanticized, aspirational Americanism has dangers, it also has the prospect of making us alive to what our communities might yet become.

We need to pursue not simply a civil public discourse, but a limited peace that appreciates the goods we have in common. But that peace can only emerge as the byproduct of churches and individuals being faithful in a hundred smaller and more limited tasks.

To that extent, Sasse’s emphasis on the “habits of the heart” is right. But those habits will only be formed by communities unafraid to embrace the weirdness that arises when we embrace practices that are overlooked and forgotten, which helped to form a world that is now passing away. And few communities should have that confidence like the church.