Few issues are so hotly debated today in evangelicalism as the issue of women in leadership. In the main, controversy surrounding this issue has focused on exegetical/theological debates such as the meaning of the Greek word kephale (head), the interpretations of key biblical texts (1 Tim. 2:11–15; Eph. 5:21–33; 1 Pet. 3:1–7, etc.), and the typological relationship between gender and the image of God. But the underlying motives that push one toward a given conclusion are not always the result of bare hermeneutics. Many and varied are the subtle influences that help shape the way in which we approach this issue. As is true in nearly everything, we tend to believe what we want to believe.

A recent book, edited by Alan F. Johnson, acknowledges the reality of life experience as a significant shaper of our biblical convictions. Pulling together a wide span of evangelical leaders, How I Changed My Mind About Women in Leadership: Compelling Stories from Prominent Evangelicals, offers a look into the influences that led these men and women to embrace egalitarianism.

The book is not a scholarly work, nor does it intend to be. Indeed, most of its 21 chapters are written by pastors and parachurch workers who would likely not consider themselves experts on the scholarly/theological issues involved. A few of the chapters make a modest attempt at defending egalitarianism (to varying degrees of success). But overall, most authors keep to the stated aim of simply describing the most significant factors that influenced his or her change of mind. Thus How I Changed My Mind is not an apologetic work, but rather functions in the broader debate in much the same way that a personal testimony functions in evangelism. 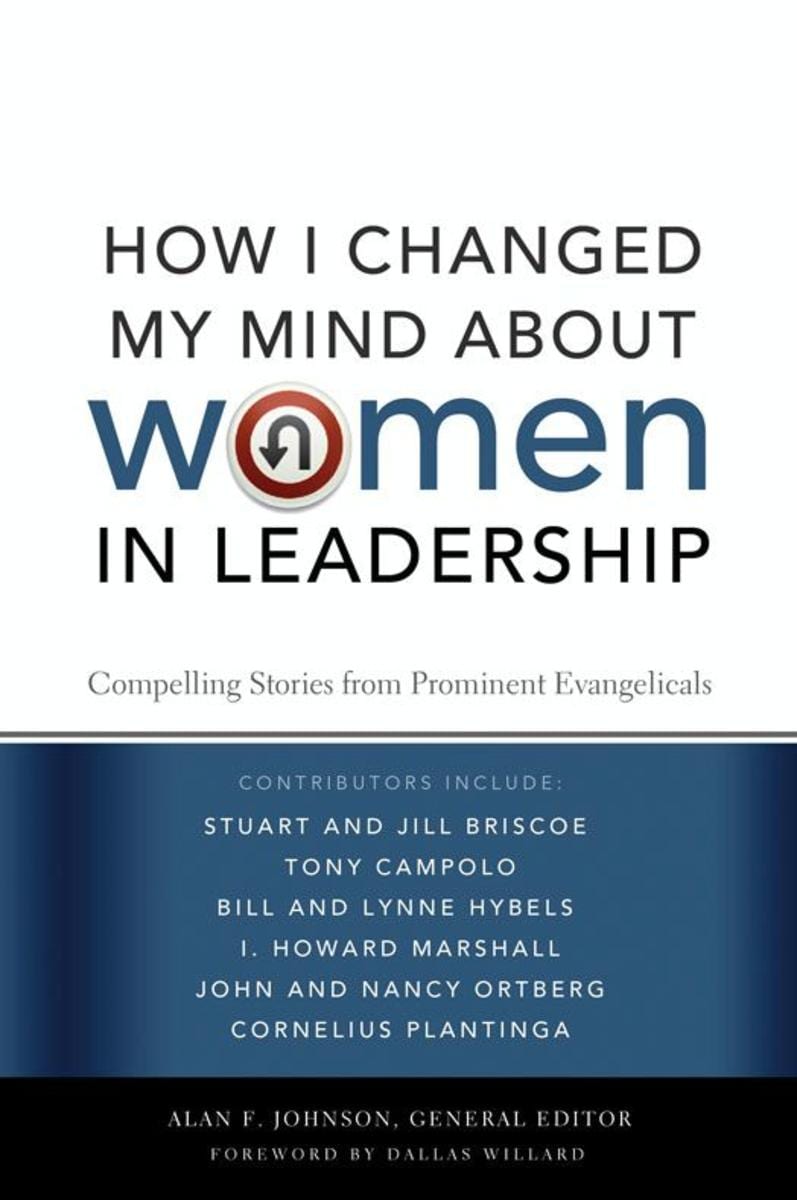 How I Changed My Mind About Women in Leadership: Compelling Stories from Prominent Evangelicals

How I Changed My Mind About Women in Leadership: Compelling Stories from Prominent Evangelicals

This book features a number of autobiographical accounts as to how various persons have come to change their minds about women in leadership. Well-known Evangelical leaders―individuals and couples, males and females from a broad range of denominational affiliation and ethnic diversity―share their surprising journeys from a more or less restrictive view to an open inclusive view that recognizes a full shared partnership of leadership in the home and in the church based on gifts not gender.

It is, of course, an impossible task to adequately review a 21-chapter, multi-authored work in 1,500 words. Yet just as there are common themes that tend to run through conversion stories, so too there are three common factors that emerge as chief influences in the lives of the contributors to this volume. While not true of every essay, the following pattern is consistent:

1. The author was raised in a fundamentalist Christian background that was highly restrictive of women’s involvement in the church (this accounts for about half of the essays).

2. The author married, or was herself, a highly capable woman with strong leadership capabilities (this was true in nearly every essay).

3. The author revisited Scripture, reinterpreting the “restrictive” passages of the New Testament in light of the “broad sweep of the biblical narrative,” which he or she saw as indicating freedom for women to serve in any leadership capacity within the church.

There is, of course, more to the individual stories than the truncated narrative I’ve outlined above. Most significantly, many of the female contributors noted the pain that came from not being able to serve in the ways they felt gifted and called. And many of the contributors were raised in what they described as generous complementarian homes, thus underscoring the point that not all egalitarians are simply over-reacting to a bad childhood experience. And notably, very few of the essays mentioned Scripture as the initial factor that caused them to reassess their complementarianism. Indeed, a significant minority of the contributors seemed little influenced by the hermeneutical issues involved, one way or the other, underscoring the point that hermeneutics frequently are not the final arbitrator of this dispute. Yet overall the stories were consistent enough that by the time I was halfway through the book the remainder of the essays ran together in a largely predictable way.

In as much as the book is a collection of personal narratives, there is really nothing to argue about here. The intent of the book is not to defend but to communicate the life experiences that helped shape the contributors’ conclusion in this matter. In this respect the book is a success, even if too long. The overall point could have been made in half the number of essays. The quality of writing is adequate, even if a bit utilitarian.

Remarkably (at least to this reviewer) the book includes no essays by a female pastor. (Nancy Ortberg comes closest, in that she used to be a teaching pastor at Willow Creek; she now runs a leadership consulting firm). It’s hard to know what to think of this. For a book dedicated to advancing the cause of women in pastoral leadership, the lack of a contribution from a female pastor seems significant, whatever one makes of it.

Given the anecdotal nature of the book, How I Changed My Mind will probably do little to change already convinced minds, particularly those minds that are more inclined to be swayed by exegesis, theology, and argumentation. But it does serve a useful purpose for complementarians who desire to better understand the existential angst that drove their egalitarian brethren beyond the complementarian fold. What follows are four points of application/observation that complementarians can glean from How I Changed My Mind:

1. Most significantly, many women have genuine pain and confusion about their place within the church. Whatever we as complementarians might think about this, at the very least we need approach this topic with sensitivity and grace. The failure of complementarians in this respect—while sometimes overstated—exacerbates an already sensitive issue. Compassion, not simply confrontation, is needed at precisely this point.

2. In light of the above, complementarians need to make as much room as possible for women to exercise their considerable giftedness within the church. Bill Hybels’ words are helpful here: “Many gifted women turn to the academic world, to the corporate world, to the arts world, because the church does not give them the opportunity to serve as fully as they believe God has both gifted and called them. If you ultimately land on a more limited view of the role of women in church life, are you at least giving women every possible opportunity within the bounds of your theological framework? To the extent that you can, are you cheering them on in their life and ministry?” (187) Indeed. When complementarians become more preoccupied with telling women what they can’t do, rather than resourcing them for what they can do, the church as a whole suffers for it.

3. Complementarians need to do a better job of articulating a well-formed biblical theology of gender, particularly as it relates to the larger narrative of Scripture. We are often viewed as maintaining a selective literalism when it comes to exegesis. It’s not quite enough for us to properly exegete the most relevant texts. There is a need to answer the “broad sweep” argument of egalitarians. In what ways does the overarching narrative of Scripture point toward the beauty of the complementarian model? We must be able to show that the “restrictive” passages are not anomalies in an otherwise egalitarian narrative. My sense is that much helpful theological work can be done here, particularly as it relates to typology, gender and the image of God.

4. In the opening page of How I Changed My Mind, Johnson notes the observation of R. T. France, who claims that he has never met an evangelical who changed their mind from an “inclusive view to a restrictive view” (13). I am reminded here of the news anchor who, upon President Nixon’s election, lamented, “I can’t understand how he won. I don’t know a single person who voted for Nixon.” Telling, indeed. But perhaps both statements say more about the one making the statement than about reality. In as much as Johnson seems to think that France’s observation serves as anecdotal evidence that conversions in this debate only run one direction, perhaps there is need for a book that takes the same approach as How I Changed My Mind, but from a complementarian perspective. No doubt many egalitarians would benefit from hearing why so many women, raised in the zenith of the feminist movement, forsook their feminist ideology and embraced a complementarian view of gender.

On the whole, I found How I Changed My Mind to be a useful book. Understanding the underlying factors that influence a person’s conviction on this topic is essential when attempting to help them see the wisdom of God’s design. As Johnson appropriately notes in the introduction, “Arguments alone often do not convince” (13). And indeed they do not-for neither egalitarians nor complementarians.

Gerald Hiestand is senior associate pastor at Calvary Memorial Church, in Oak Park, Illinois, and executive director of the Center for Pastor Theologians. He blogs at www.pastortheologians.com.