In his recent book Breaking Bread with the Dead [read TGC’s review], Alan Jacobs offers advice for achieving a “more tranquil mind”—a thing devoutly to be wished. At the heart of the book is the following insight: the more substantially we’re in touch with the past, the more effectively we’ll avoid being “trapped” in the “social structure and life patterns” all around us (14).

Like C. S. Lewis, who famously urged us to “keep the clean sea breeze of the centuries blowing through our minds” by reading old books, Jacobs argues that “you can’t understand the place and time you’re in by immersion” unless you regularly step away from it (23). For Christians, this means attentively reading (and rereading) the great works of the church’s history.

But, let’s face it, reading Augustine’s City of God, Aquinas’s Summa Theologica, Dante’s Divine Comedy, or Milton’s Paradise Lost can be hard work. Helpful resources exist for potential readers, of course. You’re more likely to hang in there with the great, big books if those who have gone before us can reduce the friction (as it were) by telling you what to expect. 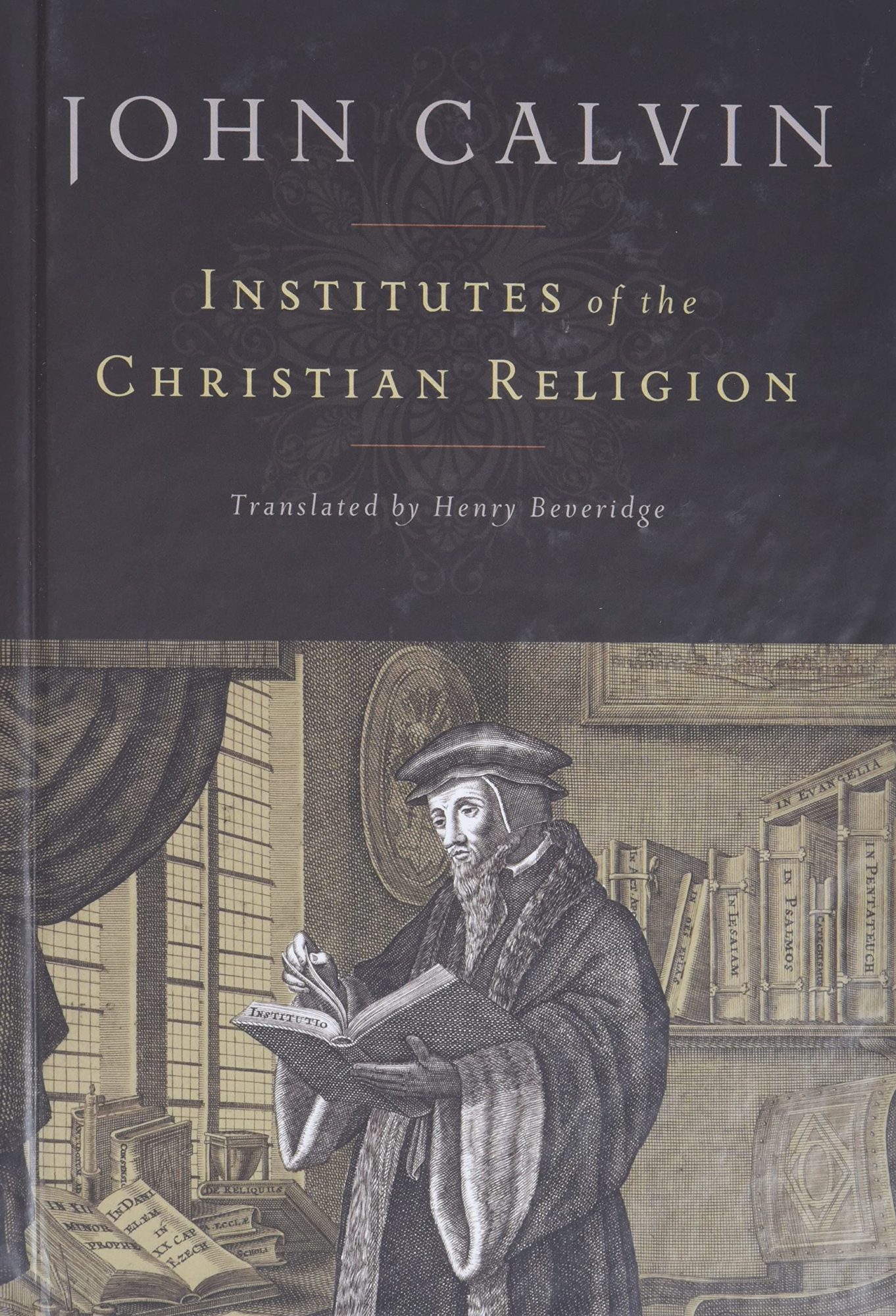 At the age of twenty-six, Calvin published several revisions of his Institutes of the Christian Religion, a seminal work in Christian theology that altered the course of Western history and that is still read by theological students today. It was published in Latin in 1536 and in his native French in 1541, with the definitive editions appearing in 1559 (Latin) and in 1560 (French). The book was written as an introductory textbook on the Protestant faith for those with some learning already and covered a broad range of theological topics from the doctrines of church and sacraments to justification by faith alone. It vigorously attacked the teachings of those Calvin considered unorthodox, particularly Roman Catholicism, to which Calvin says he had been “strongly devoted” before his conversion to Protestantism. The over-arching theme of the book – and Calvin’s greatest theological legacy – is the idea of God’s total sovereignty, particularly in salvation and election.

In that spirit, I’d like to point out some landmarks from a recent reading of John Calvin’s Institutes of the Christian Religion (1559), one of those great works of the Christian past and a daunting tome to encounter. Think of the following as lessons learned—things I wish someone had told me before I took the plunge.

1. Calvin had a vast knowledge of Scripture.

Calvin often used the Institutes to address issues that didn’t fit into his sermons or commentaries. Scholars suggest interacting with all three genres—Institutes, commentaries, and sermons—to get the full picture. No doubt they’re correct, but Calvin’s interaction with the Bible bleeds over from his exegetical labors into the Institutes. Watch for his wide and deep knowledge of Scripture. Seeing it operate in a work of this scale is marvelous to behold.

Calvin understood that being a Christian meant being connected to all Christians who had gone before. In addition to theologians of his own day, Calvin read (widely) among the church fathers and (not quite as widely) among the medievals.

Reading widely allowed Calvin to bring the debates of the past into conversation with the controversies of the present.

This allowed him to bring the debates of the past into conversation with the controversies of the present and, by considering how the church and her theologians had previously engaged those issues, to move his readers through confusion toward conclusions.

3. Calvin was formed as a Renaissance thinker (rather than an academic theologian).

This is important because the way we’re formed intellectually determines our approach to many topics; pedagogical methods aren’t neutral. Herman Selderhuis suggests that Calvin’s training freed him “to a certain extent, from the intrinsic and formal ballast that the average theologian received from the study of scholastic handbooks.” This is seen most strikingly in Calvin’s effort to read the Old and New Testaments in their original languages and to understand the words in their biblical context. This led him to read and reflect theologically upon Scripture in different (and sometimes superior) ways than those around him.

4. There’s not a lot of Calvin in the Institutes.

I don’t recall any personal anecdotes. Some of his contemporaries—Luther, for instance—rarely hesitated to insert themselves into their writing, but Calvin, who famously sought a life of reclusive scholarship before being called to public service in the church, stayed out of the limelight. In fact, he’s hardly even in the shadows. This is all the more notable given that, as an author, Calvin’s voice is quite distinct. Yet despite frequently addressing both his readers and his adversaries, Calvin operates ministerially, in service to God and his church.

5. The Institutes are not a systematic theology.

Calvin built upon the frame of the Apostles’ Creed. The entire work is divided into four “books” following the Creed, devoted to the God the Father, God the Son, God the Spirit, and the church. So describing the Institutes as a systematic theology wouldn’t be the worst mistake ever, but we should keep in mind two of Calvin’s specific goals. First, this isn’t primarily an academic work for professional theologians but a handbook for pastors laboring in the trenches of parish ministry. Second, the Institutes have an edge to them; they’re an apologetic for biblical Christianity, a polemic against false teaching, and an argument to persuade the unconvinced.

6. The Institutes are big. Really big.

To be sure, that adjective applies to impact, influence, and importance, but for the moment I primarily want to emphasize that the Institutes are long. English translations of the “definitive” 1559 edition range from about 1,300 to over 1,600 pages. And Calvin doesn’t serve up fluff.

It’s difficult to imagine the acuity of the mind that thought all of these thoughts and presented them in this way. We live in a world of short attention spans and struggles to focus. That just won’t do for the Institutes.

7. Despite its size, the work is tightly organized.

Calvin clearly knows where he’s going and when he’ll address each issue. Anyone who has ever written a long article or essay—let alone tackled a book-length project—will know the challenge of keeping everything in its place, avoiding repetition, and introducing each concept at first appearance. Calvin does this majestically on a grand scale as well as anyone I’ve ever read.

8. You may be surprised at the lack of theological fireworks.

Much of what Calvin says has gained widespread acceptance. Yet he was the first Protestant author to produce an overview of Christian belief that was so exegetically grounded, so vast in scope, and so internally coherent. If you read the Institutes and find yourself thinking, “What’s the big deal? Isn’t this just what Christians believe?” then you’re not testifying to the fact that Calvin is derivative but rather he’s showing his deep influence. What wasn’t obvious or common in his own day has become so because of him.

9. The Institutes do not focus on predestination.

Those who have been reared to view “Calvinism” as equivalent to the so-called Five Points will find themselves sorely disappointed. It’s not that Calvin doesn’t teach predestination or even that the doctrines of grace aren’t important to his theological system. They are. But they constitute one small piece of a much larger project aiming at a much larger goal than convincing readers that divine election of sinners dead in their trespasses occurred before the world’s foundation and on the basis of God’s mere good pleasure.

10. Calvin intended the Institutes to promote piety and devotion.

That may seem an odd claim for a work that contains so much theological precision. But Calvin believed that the better God’s people understood Scripture, the more they would love the God whom Scripture revealed. In Calvin’s vision of the Christian life, doctrine and piety were not opposed to one another. In this, as in so much else, Calvin and his Institutes have shown themselves to be faithful guides for the church.

Belong to the Church

OK, I admit that not every Christian will or ought to read the Institutes. But reading books like this should be part of the life of every congregation. And the conversations that flow out of those readings ought to be applied to Christian life in the local context.

Works like Calvin’s masterpiece don’t belong to a small subset of trained pastors and theologians, much less to the secular academy. They belong to the church. And reading them ties the church of this century to all of those that have come before. Reading them weighs us down so that the winds of doctrine won’t push us off course quite so easily (Eph. 4:14).

Patrick J. O’Banion (PhD, Saint Louis University) is a historian, translator, and author of several books, most recently Girolamo Zanchi’s The Spiritual Marriage between Christ and His Church and Every One of the Faithful (Reformation Heritage Books, 2021). He teaches with Training Leaders International.