Everybody in the country right now seems worried about what everybody else is buying online. And I don’t mean family-sized hand sanitizer. I mean narratives. Both Democrats and Republicans are alleging that people on the other side are buying stories they shouldn’t.

What’s instructive is the moral feeling invested in this dispute. The sides don’t feel sorry for their opponents for being lied to by bad media or political actors; no, each feels the other is morally wrong to believe whatever they believe happened, say, at polling centers in faraway states.

Whom should we trust, and how do we know? 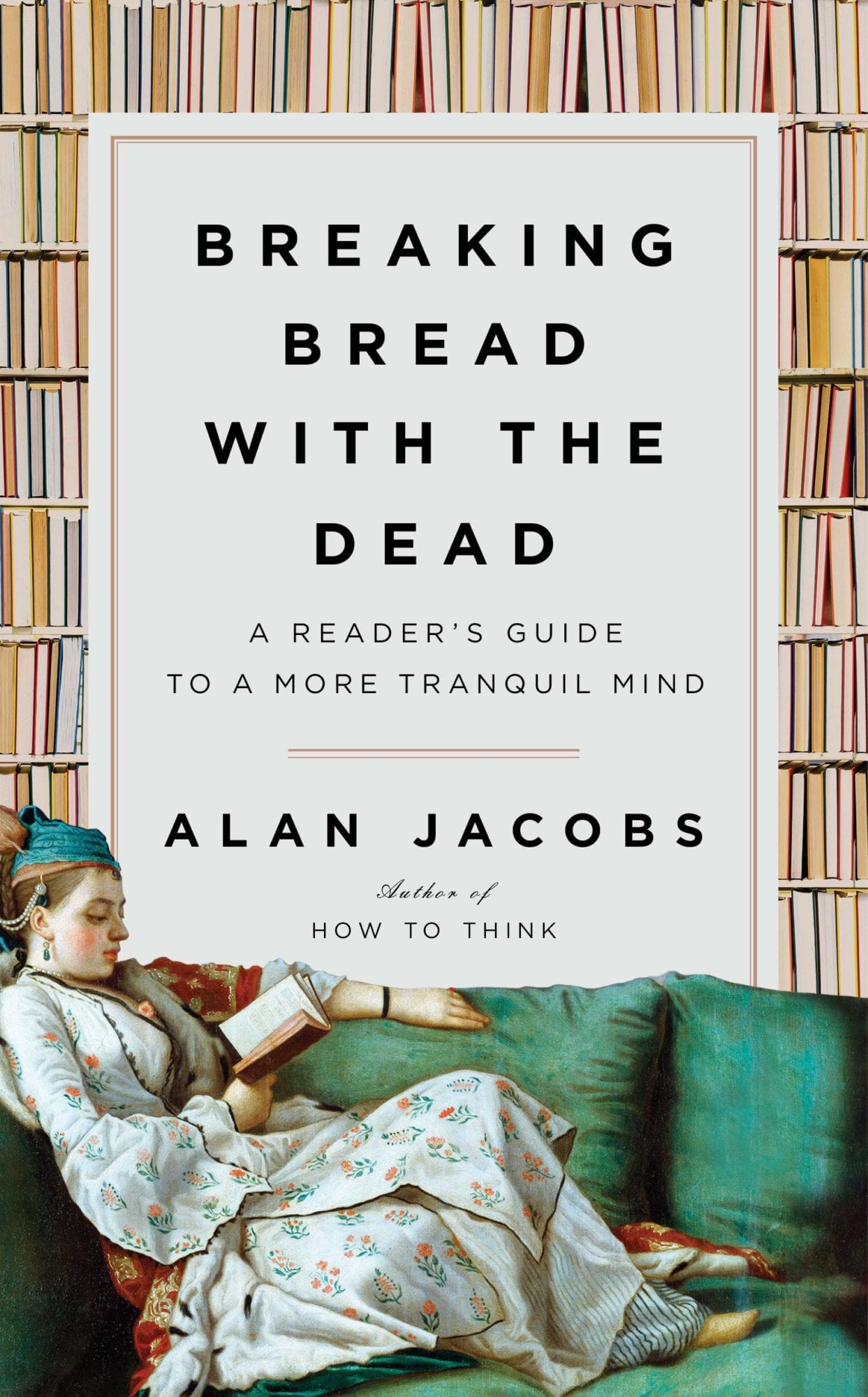 Breaking Bread with the Dead: A Reader's Guide to a More Tranquil Mind

Breaking Bread with the Dead: A Reader's Guide to a More Tranquil Mind

Today we are battling too much information in a society changing at lightning speed, with algorithms aimed at shaping our every thought—plus a sense that history offers no resources, only impediments to overcome or ignore. The modern solution to our problems is to surround ourselves only with what we know and what brings us instant comfort. Jacobs’s answer is the opposite: to be in conversation with, and challenged by, those from the past who can tell us what we never thought we needed to know.

By hearing the voices of the past, we can expand our consciousness, our sympathies, and our wisdom far beyond what our present moment can offer.

Now we’re into the realm of biblical wisdom. And I attained some more recently from literature professor Alan Jacobs in his new book, Breaking Bread with the Dead: A Reader’s Guide to a More Tranquil Mind. Jacobs sells his book at the beginning as something of an antidote to the itch to check your smartphone. And reading old books as Jacobs recommends can indeed help there. But for me, Jacobs’s advice is more applicable to our problems with partisan epistemology—the idea that truth can’t ever straddle political aisles. Jacobs’s advice is to increase our ability to know whom to trust by expanding our “personal density” to include perspectives from the past.

Jacobs helped me spot and combat three contemporary temptations—one faced by the Left, one by the Right, and one by us all.

The first temptation Jacobs helps us all avoid is a lack of charity toward the dead, one manifested in acting as if they existed so long before the “right side of history” arrived—on the day we were born, of course—that they don’t merit our attention. This is the temptation, to put it in more explicitly Christian terms, to believe that the effects of Adam’s fall were so pervasive in the past that we who have transcended those effects are better without our ancestors.

Jacobs helped me spot three contemporary temptations—one faced by the Left, one by the Right, and one by us all.

Jacobs’s target here is the cultural Left (who seem to be his primary audience throughout the book). He’s put his finger on the pulse of people who tear down Abraham Lincoln statues—Abraham Lincoln! Lincoln surely had flaws, but he was also the president most likely to say so. Even in the hottest days of the Civil War, he was flavored with enough good Calvinism to know that right and wrong didn’t line up neatly on either side of the Potomac. His Second Inaugural is a model of Christian charity and submission to the judgment of God, even if he wasn’t an orthodox Christian.

Another Civil War–era figure, Frederick Douglass, also had incredible, unfathomable, eloquent Christian humility in the face of slavery’s evils; and Douglass’s stern and yet ultimately charitable words come up multiple times in Jacobs’s telling. Douglass was able to honestly and openly admire the American founding fathers while still feeling more grief than joy as the nation celebrated July 4 in 1852. Rather than calling for the death of the nation, he called it to live up to its founders’ ideals.

The Right has a different temptation. They instead enlist their dead neighbors as proof of the truth of their values—without always listening to the dead’s opinions on this or that issue. The Right, in other words, tends to appropriate the past for its own nostalgic purposes. But as Jacobs argues, “It is foolish to think that we can carry with us all the good things from the past—from our personal past or that of our culture—while leaving behind all the unwanted baggage. . . . Wisdom lies in discernment, and utopianism and nostalgia alike are ways of abandoning discernment.” In other words, we must not erase the effects of the fall from our pictures of the past or the future.

Jacobs counsels neither hatred and rejection of the past nor MAGA-colored historical spectacles: he urges us all to escape the insistent demands of the moment by really reckoning, in love, with the writings of long-dead neighbors.

The third temptation sums up the previous two: both Right and Left are often so caught up in the latest mêlée that we live in danger of becoming historical orphans. We need to let ourselves be shocked by the differences of the past precisely so we’re not destabilized by the errors of the present.

We need to let ourselves be shocked by the differences of the past precisely so we’re not destabilized by the errors of the present.

We need the “sea breeze” of other centuries (to use a C. S. Lewis phrase) blowing perspective into our minds. Nothing, in fact, may better make sense of today’s thought categories than being shocked by those of yesteryear. Again, Jacobs explains:

The real challenge, but also the real opportunity, of breaking bread with the dead comes when the dead say something that freaks us out—freaks us out to the point that we are strongly tempted to turn away in disgust and horror. But those may be just the moments when we need to steel ourselves to keep giving the blood of our attention.

This advice works because of a Christian truism Jacobs doesn’t mention, but one I know underlies his thought: a creation-fall-redemption biblical worldview is essential to wisdom in an age of competing partisan narratives. Ideally, we bring a humility and a wariness and a firm hope to our reading of anyone from any age.

A creation-fall-redemption biblical worldview is essential to wisdom in an age of competing partisan narratives. Ideally, we bring a humility and a wariness and a firm hope to our reading of anyone from any age.

I’ve been concerned at times about Christians I know who seem to be falling into a political echo chamber or even a conspiracy theory. And I think, Where do I even start with such a person? Should I say, “Go read a Puritan”? It’s hard to draw a direct line from reading old books to discerning the truth amid competing claims on cable news.

But of course, the Bible itself is an old book from far away. And getting wisdom is always time-consuming. It takes “all thy getting.” Among many other shepherding strategies I can employ to promote wisdom is encouraging and modeling the reading of old books. (And it doesn’t hurt that so many of our old Western books were written by Christians.)

I don’t want to slide left or right, to be pulled by any of the available groupthinks away from the center of divine wisdom. But maybe left and right aren’t the only axes along which we can all be unhelpfully yanked. Maybe the chronological axis is important, too. As Jacobs reminds us, we have to go backward into the past in order to forge wisely ahead.

Mark Ward (PhD, Bob Jones University) is the editor of Bible Study Magazine and author of its back-page column, Word Nerd: Language and the Bible. He is the author of Authorized: The Use and Misuse of the King James Bible (Lexham Press, 2018), which became a Faithlife infotainment documentary. He is also the host of the Bible Study Magazine Podcast and is an active YouTuber.