I (Jarvis) grew up in a rural town in the American South where racism was normal, both in overt and covert forms. The ugly word “nigger” was a common white epithet for black people that black people internalized and used as well. As a black/brown person of mixed ethnic heritage, I couldn’t go to certain white communities, and some people spoke of black people in dehumanizing ways, even to our faces. Growing up in that environment, I often struggled with the question, Is there something wrong with my skin color?

For almost two decades now, as I’ve lived in a city and traveled around the country, I’ve seen that racist ideologies and constructs exist beyond rural communities—albeit in subtle and socially acceptable ways.

For parents, this social reality means we need to talk with our children about racism and ethnic difference. Below are three pressing reasons why we believe this work is so vital. 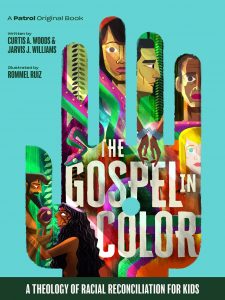 Racism isn’t just something that happened in the past. Tragic events in the news show that racism is deeply embedded in the American social fabric. This evil is also in the church, despite racism’s complete incompatibility with the gospel of Christ. Many churches fought against equal rights for blacks during slavery, reconstruction, and the era of Jim Crow laws. You can hear this ongoing legacy in the way some Christians speak about brown immigrants particularly, as well as black and brown people generally.

I (Jarvis) remember the time my son overheard a child say he was stupid because he had “brown skin.” This incident happened in a predominantly white Christian context. He has continued to be deeply grieved by expressions of racism in American culture. One evening we spent a long time talking about the image of God, sin, racism, and the gospel, as he peppered me with tearful questions. Even as an 8-year-old, he recognized the ways our culture, and even Christian spaces, prioritize whiteness and marginalize his brown skin. As a Christian father, I must work diligently to assure my son that God loves his brown skin, that brown skin is beautiful, and that white skin is not superior to brown skin.

Like it or not, the reality of racism means we’ll be forced to have these uncomfortable conversations with our children.

The reality of racial division in our country means that Christian parents of all ethnic backgrounds must teach their kids about the gospel, race, racism, ethnic difference, and discrimination. Like it or not, the reality of racism means we’ll be forced to have these uncomfortable conversations with our children.

2. Racism Is a Systemic Problem

Discrimination is deeply ingrained in the structural fabric of the United States, including many Christian spaces and institutions, often showing up in subtle ways. To be clear, this doesn’t mean every person intentionally practices racist behavior, nor that every problem experienced by black and brown people in America results from racism. But even when people don’t intend it, we—and our children—inhabit a racialized society where one’s perceived race provides advantages or disadvantages.

We must equip our kids to understand the society they live in so they can wisely navigate it with a gospel lens.

Our social order placed non-white men, women, and children—people created in the image of God—at the bottom. This order was created by explicitly racist policies and laws like slavery, Jim Crow, and the exploitation of immigrant workers. The destructive effects of this social order are still felt today.

We must equip our kids to understand the society they live in so they can wisely navigate it with a gospel lens.

We’ve heard many well-meaning Christian parents espouse a naïve commitment to colorblindness, the idea that we shouldn’t see color or make race-based decisions. At first it seems appealing and even biblical. After all, we live in an age when many people of color have influence, power, and wealth—as evidenced by Barack Obama’s presidency. And Galatians 3:28 states that “there is neither Jew nor Greek, neither slave nor free, and neither male nor female, for we are all one in Christ.” As a result, some argue that there’s no such thing as a black Christian or a white Christian—we’re all just Christians. Christians should stop talking about race, because talking about race will make race an issue, and it doesn’t need to be.

But colorblindness inadvertently exacerbates the very racism it seeks to avoid, because it allows the majority cultural group to maintain its privileged position, preserving the status quo in which minority groups continue to experience discrimination and domination. Christian parents who affirm colorblindness do a great injustice to their kids and to the black and brown people in their communities, deepening racial wounds and setting up children for emotional, spiritual, and psychological devastation when they experience racism.

We must acknowledge and celebrate the fact that God made men and women in a variety of shades—and this is a part of his good creation!

Ethnic discrimination is part of the ordinary and everyday rhythm of the American experience, so we must address it with our kids frankly and wisely, by the power of the Spirit. We can’t tell our children to pretend skin colors don’t exist. Instead, we must acknowledge and celebrate the fact that God made men and women in a variety of shades—and this is a part of his good creation!

Parents need to grapple with the reality of racism, especially because it’s ultimately a spiritual problem. Racism’s origins go all the way back to the garden of Eden, and the sin of racism can only find complete healing through the victory of Jesus Christ on the cross. The message of gospel-centered racial reconciliation, then, is of paramount importance.

It’s not easy to talk about these things with kids, but it’s a challenge we must take up, speaking the truth in love and relying on the Spirit to help us in the process. Together we’re called to celebrate the beauty of the gospel in color, to proclaim our unity within our diversity—and to teach our kids to do the same.

On April 3–4, 2018, in Memphis, the Ethics & Religious Liberty Commission and The Gospel Coalition hosted a special event titled “MLK50: Gospel Reflections from the Mountaintop,” to reflect on the 50th anniversary of Dr. Martin Luther King Jr.’s tragic death. The 50th anniversary of King’s tragic death marked an opportunity for Christians to reflect on the state of racial unity in the church and the culture. It created the occasion to reflect on where Christians have been and look ahead to where we must go as we pursue racial unity in the midst of tremendous tension. All conference media is now available for free.

Jarvis J. Williams is associate professor of New Testament interpretation at The Southern Baptist Theological Seminary and a preaching pastor at Sojourn Church Midtown in Louisville, Kentucky. He is the author of several scholarly articles and books, including One New Man: The Cross and Racial Reconciliation in Pauline Theology and Galatians (New Covenant Commentary Series). He is married to Ana and is father to Jaden.

Curtis A. Woods is associate executive director for the Kentucky Baptist Convention. He holds undergraduate and graduate level degrees in social work, urban studies, and pastoral theology. He earned a PhD in biblical spirituality at The Southern Baptist Theological Seminary in Louisville, Kentucky. His research interests are in African-American intellectual history.