I have a friend who grew up in a Christian home with amazing Christian parents. They raised him “in the discipline and instruction of the Lord” (Eph. 6:4). At a young age, he put his trust in Christ as Lord and Savior, and faith began flourishing in his life. When he was 18 years old, he went off to an evangelical Christian university, where his faith only continued to grow. But as time went on, feelings and attractions toward the same sex became more and more evident in his mind and heart. These feelings alarmed and confused him, since he knew and believed what the Bible says about homosexuality; as his feelings increased, so did his inner turmoil. He was torn between Scripture’s sexual ethic and his same-sex attractions.

He hid his struggle from others, especially from his parents, during his college years. But feeling ashamed and at times hopeles 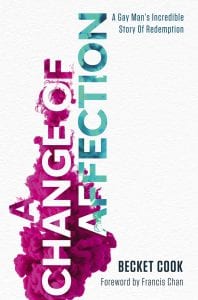 s, he sought help, eventually opening up to close friends and even his parents. Reactions were mixed. His parents were initially distraught, but soon became compassionate and understanding. They hoped he would remain faithful to the Word of God and wanted to be there for him in any way they could. Some of his friends rejected him, while others tried to help him through this difficult and confusing period.

After college, he seemed to be in a good place with the Lord. He felt he had a handle on things and was willing to deny himself to follow Christ. But then he met a guy and fell in love. Although he was torn about this new relationship, knowing it was wrong, he had never felt so good and so free. And his boyfriend assured him over and over that their relationship was not sinful. How could love this deep be sinful? Wasn’t the Bible outdated when it came to these matters? He just needed to be true to himself, and everything would work out fine.

My friend ultimately surrendered to his feelings, and to his boyfriend’s pleas, and made a conscious decision to walk away from the Lord and pursue this relationship. He knew deep down that living a homosexual life is incompatible with the teaching of the Bible, but he was tired of fighting his desires.

I’ve seen this phenomenon over and over again, and it breaks my heart. I’ve watched many who profess to be followers of Christ give up their birthright for a single meal, choosing their desire to satiate their appetite now over the amazing promises of Christ. When I talk to young people who struggle with same-sex attraction and are about to throw in the towel and give in to that temptation, I try to help them see what a vapor this life is. Funny as it sounds, I try to make them understand that eternity is a very long time. I try to convince them that selling their birthright is not worth it. I always reference these powerful verses:

These verses are often a salve to the soul when I struggle with temptation. Sometimes I remember the wedding feast of the Lamb, and everything else evaporates. It’s hard to fathom the eternal weight of glory, but I know it’s infinitely more gratifying than any ephemeral pleasure on this earth. As Matthew Henry observed regarding Esau’s tragic decision, “The gratifying of the sensual appetite is that which ruins thousands of precious souls.”

I’ve watched many who profess to be followers of Christ give up their birthright for a single meal, choosing their desire to satiate their appetite now over the amazing promises of Christ.

In the New Testament, the writer of Hebrews makes a chilling reference to Esau’s fate:

See to it . . . that no one is sexually immoral or unholy like Esau, who sold his birthright for a single meal. For you know that afterward, when he desired to inherit the blessing, he was rejected, for he found no chance to repent, though he sought it with tears. (Heb. 12:15–17)

There will come a day when we will meet Christ face to face. That day will be either the greatest or the most devastating day imaginable, depending on whether or not your name is written in the Book of Life (Rev. 20:15). What do you want to hear on that day? “Well done, good and faithful servant” (Matt. 25:21) or “I never knew you; depart from me” (Matt. 7:23)? The latter are the most terrifying words a human being could ever hear. What would you be willing to give up to avoid that outcome? What would you refuse to do if it meant spending eternity with Christ?

The only true passion worth living for is passion for Christ. The only true meal is the Bread of Life. The only true drink is the water that will never make us thirsty again—the living water of a loving Savior.

Taken from A Change of Affection: A Gay Man’s Incredible Story of Redemption by Becket Cook. Copyright © 2019 by Becket Cook. Used by permission of Thomas Nelson. www.thomasnelson.com.

Becket Cook (MA, Talbot School of Theology) is the author of A Change of Affection: A Gay Man’s Incredible Story of Redemption and host of The Becket Cook Show on YouTube.

2 After Roe, How Do We Stand for Life?

This Baptist Praises God for the PCA