“This is a story of someone who took his faith to radical conclusions and did not leave the radicality within the walls of the church. It had implications for everything that he did.”

If it were possible to boil down the story of Larry Norman to two sentences, Gregory Thornbury seems to have done it. Everything about Norman, the universally agreed-upon father of Christian rock music, was radical, and there are lessons to be learned from his life for all who follow Jesus Christ.

“Christians should care about the Larry Norman story because we love talking about cultural engagement,” Thornbury says, sitting in a coffee shop in lower Manhattan. “That’s a buzz term—cultural engagement—and Larry’s the original factory setting for it. He was doing something incredibly unpopular. That’s why I call him a holy fool. The church didn’t like what he was doing, and the secular music industry didn’t know what to do with him, and he kept pressing forward.”

The church didn’t like what [Larry Norman] was doing, and the secular music industry didn’t know what to do with him, and he kept pressing forward.

For Thornbury, who tells the unabridged tale of Norman in his new book, Why Should the Devil Have All the Good Music?: Larry Norman and the Perils of Christian Rock, this is the crux of his story.

“To be honest, I don’t like the term ‘cultural engagement’ because it makes culture sound like something that’s over there in the next county and we’re making forays into it,” he says. “I’m sorry, but culture has already overwhelmed us. It’s winning. So the question is how do you have a legitimate voice and not concede your beliefs? I think that’s the most relevant narrative for young Christians, because none of them likes the ‘holy huddle’ mentality. We all want to be in the arts, we need to be in film, but who’s actually doing it? The Christians we point to as artists who are recognized in those worlds . . . sorry, I’m in the art world, and nobody knows who they are. But Larry Norman? People respected him. Non-Christians respected him more than Christians did.”

Rock Star Who Gambled on Jesus

Norman came onto the scene as a solo artist in 1969 with his debut LP, Upon This Rock. The album was released on the legendary Capitol Records—which has, throughout its history, worked with artists like the Beach Boys, Avenged Sevenfold, the Beastie Boys, Mary J. Blige, and countless others—and contained tracks like “You Can’t Take Away the Lord,” “Moses in the Wilderness,” “Sweet Sweet Song of Salvation,” and “The Last Supper.” He was rocking and rolling across the country, all the while spreading the gospel. 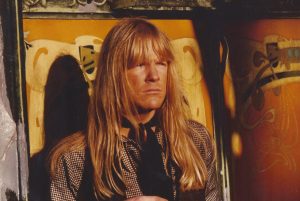 “Larry was a Jesus freak and everybody knew it, and yet, there he was,” Thornbury explains. He’s a longtime fan who, after first hearing one of Norman’s records, drove 750 miles to see him in concert. From there his fandom grew and, as he puts it, Norman’s music became part of his mental fabric.

“I met him, I talked to him a little bit. Back then I worked in radio so I got to interview him, and I could sort of observe him backstage,” Thornbury recalls. “Everybody thought he was controversial, but he was really the only person who was real backstage. He hung out with people, he prayed with people. Other people acted like rock stars, but Larry actually was a rock star.”

In 2008, upon hearing of Norman’s death, Thornbury paid his respects while on a trip near Salem, Oregon, Norman’s resting place. It didn’t take long for Thornbury and Norman’s brother, Charles, to strike up a friendship that would eventually lead to Thornbury digging through hundreds of boxes of Norman’s journals and notes that few others even knew existed.

“That was a huge undertaking,” Thornbury says. “I went through everything. It was all unfolding before my eyes in contemporary fashion; it was like going back in time.”

Charles and the family turned everything over to Thornbury and entrusted him to tell the story as he saw it. But more than simply telling the story of a complex rock star, Thornbury crafted a timeless chronicle of an artist who sought to kill complacency in religious folks.

Thornbury [has] crafted a timeless chronicle of an artist who sought to kill complacency in religious folks.

“Inside of everyone is an artist waiting to get out, and the artist is going to take a gamble on something. The question is, is your gamble the right gamble? And you don’t know until you’ve tried and done it,” Thornbury says about the subject of his book. “Larry gambled on Jesus and kept doubling down in an artful way. Most of the faith-and-work stuff that I read today is not very helpful, because there isn’t that much gospel in it. It’s not that forthright. Larry, he was harassed by Christians, not by the world, and you know what? That’s probably the right combination.”

We’re of the World. But Are We in It?

Thornbury—chancellor of The King’s College in New York City as well as vice president of the New York Academy of Art—can’t think of many people who live up to Lewis’s statement.

“There’s a moment in the book,” he says, “where Larry wonders how many non-Christians are going to go to a Christian bookstore and ask for records about salvation or albums about how to be good Christians. Larry knew they would never do that, and they would never listen to music like that, and that was the message he tried to get across to Christian artists.”

Thornbury dislikes the statement Christians love holding to—that they are to be in the world but not of the world.

Christian is the greatest of all nouns and the lamest of all adjectives.

“We love to say that, but the problem is we’re of the world and not actually in it,” Thornbury says. “The only thing I think I’ll ever be remembered for saying is that Christian is the greatest of all nouns and the lamest of all adjectives . . . but Norman, he was way ahead of his time. To talk about sexually transmitted diseases in your most famous song about Jesus was way ahead of its time. He went to those ‘no go’ places. He criticized American passivity—the church’s passivity—toward warmongering. But what do we do today? We try to make nice. We don’t have those kinds of prophets who are willing to be equal-opportunity offenders. They’re either on one side or the other.” 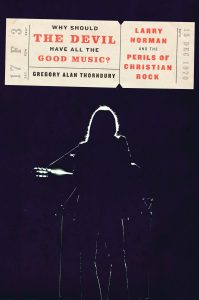 Thornbury believes there are simply not enough people allowing the transcendence of God to enter into their work.

“Today, the Christians in the secular music industry, gosh, you’d be hard pressed to figure out what they believe just by listening to their records,” he says. “I don’t think there are people who know how to do [what Lewis describes]. Back in the day, you could hand someone a Larry Norman record, and it held up. They might not dig the religion stuff, but people would say it’s good, and they understood why you were into it. You could hold your head up high. It didn’t make people cringe.”

Though Thornbury praises Norman’s boldness and courage, the rock star’s story is not one of easy success.

“It’s a bittersweet story,” he admits. “I think it’s possible we could have some believers able to rise above the fray, but the difference with Larry was that even though there were moments in his career when he made a lot of money, he didn’t care about money. He never tried to prop up any particular situation . . . but Larry mythologized more than anybody. He was relentless about making sure that he was the Pied Piper.”

Norman believed his message was the one everyone should follow. He wasn’t interested in blocking himself off from the outside world, and he didn’t think other Christians should either. As he released more music and played more live shows—all the while gaining more fans and more critics—Norman saw himself as the expert on what it meant to be spiritual without being religious.

Norman saw himself as the expert on what it meant to be spiritual without being religious.

Thornbury goes on, “You’ve got to be careful when your actual goal is to be the maven. The maven is this sort of prophetic person, like the Oracle of Delphi. I think that’s one of the unique features of Protestant evangelicalism—it’s one of its best things but also its achilles heel. In the Roman Catholic tradition, if you’re the priest, you consecrate the Mass, and it doesn’t matter if you can preach or not. You have the Mass, you have the thing that the people need. But if the main thing is the Word, then people may be coming for you. That is dangerous.”

And that is a significant part of Norman’s bittersweet story, which Thornbury offers to readers as a caution.

“[This story] is most compelling not for his successes but for his dizzying, at times mystifying, lows. Norman’s closest friends disparaged him in interviews, rumor-mongered with concert promoters, and shook their heads at his sinful behavior in backstage conversations with friends.” To put it succinctly, the Christian establishment of Norman’s time found him too perplexing and controversial to support and embrace. Norman died as “a once-in-a-generation musician” who never received the acclaim or success he deserved.

This story, though intriguing and fascinating, doesn’t necessarily provide much immediate hope. If Larry Norman, the father of Christian rock and a prophet of the good news, couldn’t pull it off, what promise is there for Christians today? 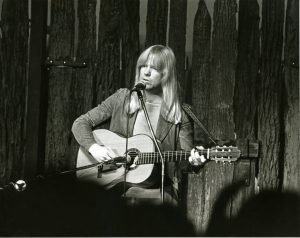 Let the Scandal of the Gospel Be an Actual Scandal

“This is a story of someone who took his faith to radical conclusions and did not leave the radicality within the walls of the church,” Thornbury says with a hint of optimism in his voice. “It had implications for everything he did. Larry put himself in situations that made people raise eyebrows. When he died in 2008, [the magazine] Spin did a feature story on Larry, and they talked to Black Francis [of The Pixies]. He told this story of bringing Larry to a club and running into a guy who worked in the adult film business, and that guy loved Larry. They got along so well. Larry was there, you know? He was in the world, but he wasn’t of it.”

Thornbury concludes, “He tried, he tried to get Christians to be artists. He thought the music should be art, not propaganda. He let the scandal of the gospel be an actual scandal, and that’s a big risk to run.”

Norman tried to get Christians to be artists. He thought the music should be art, not propaganda.

As quoted in the Why Should the Devil Have All the Good Music? and elsewhere in Larry Norman folklore, Paul McCartney of the Beatles once told the Christian rocker, “You’d be a huge star if you’d shut up about religion.”

But Norman never shut up about religion, providing a crystal-clear answer to Thornbury’s final question: for Norman, the risk of the scandal of the gospel was definitely worth it, no matter the cost.

Chuck Armstrong serves as the pastoral resident with Redeemer Lincoln Square in New York City, where he lives with his wife, daughter, and pooch. He will begin his DMin studies at Midwestern Baptist Theological Seminary in ethics this fall. You can follow him on Twitter @chuck_a.