I recently gave a lecture on virtue for a Christian men’s group, most of whom shared my theologically and politically conservative views. The group was supportive of my speech; however, I got the most heartfelt reactions from a comment I made during the question-and-answer session.

I was asked about what kinds of movies and television shows Christians should or shouldn’t watch, and I offered an internal test rather than a one-size-fits-all rule. If you watch something that contains graphic language, violence, nudity, or strong sexual situations, does it go in one ear (or eye) and out the other, or do you linger on it or even obsess over it? If the latter is the case, then you would do best to avoid it.

From there, I segued into the political realm to share something I’ve found true in my own life. Although I usually agree with the positions taken on convervative news shows and talk radio, I’ve discovered that every so often I need to “fast” from such content. I know it’s time when I meet a new believer and the first question that pops in my mind is whether he’s a conservative or a liberal. 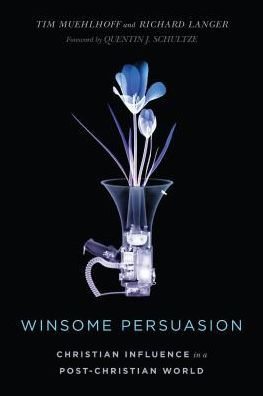 My tangential comment garnered much enthusiasm and agreement from the group. What I found in this group of socially conservative men—men whom the media regularly accuses of being mean and uncaring—was a strong and sincere desire to maintain a good witness in the public square. They understood that if we’re to be salt and light in the secular world, then we need to be pure of mind and thought, filled with the gifts of the Spirit rather than controlled by partisan political passions.

Just a week later, I picked up Winsome Persuasion: Christian Influence in a Post-Christian World by Tim Muehlhoff and Richard Langer. Muehlhoff (professor of communication at Biola University) and Langer (professor of biblical and theological studies at Talbot School of Theology) address their book to believers who’ve been troubled by the decay of basic Christian morality and are repelled by the incivility, name-calling, and downright malice that dominates the modern public square.

Both winsomely and persuasively, the authors chart a course by which evangelicals can engage in effective discourse with those who disagree with our beliefs. The authors do an excellent job defining their terms, setting their argument in the context of classical, Aristotelian rhetoric and modern communication theory, enumerating biblical principles for engagement with a secular world, and laying out practical ways to put those principles into action.

But they don’t stop there. What sets their book apart from others like it is that Muehlhoff and Langer incarnate those principles and practices by walking us through four case studies in which Christians radically changed the culture of their day.

One of those stories, how William Wilberforce and his Clapham sect convinced England to abolish the slave trade and slavery itself—a vision that took more than 40 years to realize—is well known to most readers. Less familiar are the persuasive methods Wilberforce used to achieve his seemingly impossible goal.

Rather than demonize his opponents, Wilberforce built “loose connections” with unlikely bedfellows. Chief among them was Charles Fox, a man whose dissolute moral conduct stood in sharp contrast to Wilberforce’s second goal of reforming British manners, but who nevertheless favored the abolition of the slave trade. Because Wilberforce was willing to “cross the aisle” and join forces with someone who didn’t share all of his values, the two men were able to cultivate “a deep mutual respect that transcended their personal, moral, religious, and political differences. It is unlikely that Wilberforce would have succeeded without the support of Fox” (146).

Wilberforce, in a Christlike spirit of humility, also refused to demonize those who weren’t committed to abolition. In his opening speech to Parliament on the subject, after laying mountains of hard evidence on the horrors of the slave trade, he refused to “employ the rhetoric of moral outrage” (148). Including himself among those who must bear responsibility for the slave trade, Wilberforce “kept the focus on the morality of slavery itself instead of the morality of his peers and colleagues” (149). As the authors explain, Wilberforce—by never allowing his cause to become personal and by avoiding an all-or-nothing stance that would alienate Parliament members—was able to win over his colleagues in slow, “incremental steps” (150).

Meanwhile, in America, the abolitionist cause found its most winsome and persuasive voice not in a politician, but in a novelist: Harriet Beecher Stowe. Rather than shout her moral outrage from the rooftops or deluge people with facts and figures, she wrote a novel that humanized slaves and allowed Americans from North and South alike to sympathize with those caught in the horrors of slavery. She engaged the heart as well as the head, allowing readers to be drawn toward the cause of abolition rather than be driven there by harangues.

Muehlhoff and Langer highlight an aspect of her novel, Uncle Tom’s Cabin, that gave it the power to change minds. Stowe “refused to demonize the South or deify the North. Not only did she avoid making Northern whites morally superior to Southern whites in her book, she shunned almost all the traditional stereotypes.” Instead of laying the blame on one region or group of individuals, Stowe “portrayed slavery as an institution that corrupted all it touched: black or white, male or female, old or young, religious or irreligious. She invited her readers to stand on common ground, avoid ad hominem arguments and stereotypes, and simply consider the situation of slavery on its own (de)merits” (127).

The other two case studies will be less familiar to most readers. Carrying us back to the fifth century, the authors tell the truly remarkable and remarkably true story of Saint Patrick. Though kidnapped and sold as a slave in Ireland, Patrick, after escaping and studying to become a priest, willingly chose to return to the cruel, barbaric island of his enslavement. Patrick faced a future as an isolated counterpublic: someone who “represent[s] the minority perspective yet want[s] to engage those who hold the dominant view” (14).

Whereas counterpublics too often turn inward to create “private, hidden transcripts [that] can be rhetorically harsh and contain unflattering characterizations or stereotypes of others” (19), Patrick and his companions created havens of peace, love, and hope amid an island torn by war, brutality, and human sacrifice. The Celtic monasteries they built offered “a foretaste of heaven” (46) to a population who experienced hell on earth. Patrick could’ve stood on the outside and thundered condemnations on the sinful Irish. Instead, he changed Irish culture from within.

And Patrick effected that change “by faithful action at a local level. He was absolutely committed to the conversion of the entirety of Ireland, but his strategy was always expressed by working in very localized communities” (48). Though the authors support sending missionaries to fulfill the Great Commission, they rightly remind us that lasting change is built from the ground up, by creating “enclaves of human flourishing and divine peace and reconciliation” (50) in a fallen world.

The final example of transformational Christianity also made its mark on the world through outposts of peace and reconciliation. Rather than petition the government for better treatment of people with disabilities or express moral outrage toward those who didn’t share his cause, Jean Vanier (1928–) set up local communities in which disabled and non-disabled people would live side by side in a spirit of fellowship and hospitality: “not as caregiver and cared for but as fellow human beings” (83). The authors sum up beautifully what Vanier offered as a remedy to help a group who had no voice in society: “compassionate community instead of hostile rhetoric. He did not argue for treating mentally disabled persons as equals; rather, he formed communities where their equality was a fact” (86).

This is a book that should be read by all Christians who desire to make an impact in a world that has thrown off the moral values we hold most dear. Muehlhoff and Langer offer a way forward by which we can build bridges to the wider society—by which we can be in the world but not of it.