In those six simple words lies the heart of one of the most important and most controversial topics in our culture right now: gender identity. Such a sentence carries heavy meaning, especially for those who have suffered confusion and dissonance when it comes to gender and sexuality.

Our cultural conversations about transgenderism, gender dysphoria, and sexual identity matter not ultimately because of social or political implications, but because of what these issues mean for how we understand ourselves and each other as human beings. If Christians are to offer both clarity and compassion to those struggling with these issues, we must first recognize that what is really at stake is not a “culture war” or political clout, but real people. That means it won’t be enough to merely knock down a rival worldview; we must show, in word and deed, that the gospel really is good news—even better than the promises of the sexual revolution. 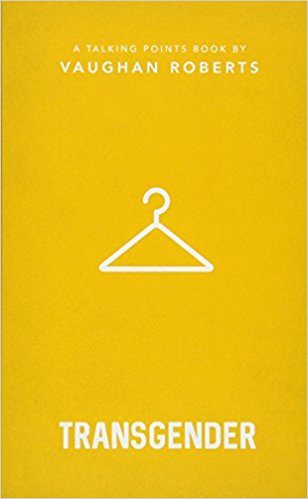 There’s been huge cultural change in the last few decades. Same-sex marriage would have been unthinkable 20 or 30 years ago. Now it’s almost universally accepted in the Western world. Now suddenly the issue of transgender is the next big social, cultural issue that has dominated the headlines.

Vaughan Roberts surveys the Christian worldview and seeks to apply these principles to the many complex questions surrounding gender identity.

This hope of a better word permeates Vaughan Roberts’s helpful new book, Transgender. Appearing in The Good Book Company’s series of Talking Points, Roberts’s extra-brief (75 pages) summary of the transgender conversation and what it means for orthodox Christians serves as a valuable primer for gospel-centered engagement.

What It Means to be Human

As Roberts explains, a growing number of people in Western culture are rejecting the idea that the body we’re born with constitutes who we really are. Instead, many, especially millennials, understand maleness and femaleness to be conscious expressions of desire and felt identity. According to this gender ideology, it’s wrong to think of human beings as inherently male or female. Gender is fluid, not fixed, and a person’s self-determination is the only authoritative judgment on who they really are.

As Roberts puts it:

There’s a deeply rooted conviction that everyone is free to define themselves as they wish, and no one has the right to question the self-definition. That explains why our culture’s knee jerk reaction to those identifying as transgender as changed from an unquestioning “Yuk!” to an unquestioning “Yes!” (30)

For many Christians, this idea seems self-evidently wrong and contrary to a biblical worldview. But too often, believers who accept the biblical teaching of gender—that God made mankind in his image, male and female (Gen. 1:27)—don’t know how to respond to transgender ideology. Unfortunately, some churches have responded by seeing those struggling with gender identity issues as “freaks,” adopting a defensive and even hostile “culture war” posture.

Instead, Roberts’s book offers a helpful summary of what the church should be saying about transgenderism and gender identity. This summary is structured around the biblical theology of creation, fall, and rescue.

As Christians, the first thing we ought to affirm in talking about gender identity is that all people, regardless of how they identify, are created in the image of God. Because all human beings are made in the image of an infinitely valuable God, each of us carries intrinsic worth and dignity. No sin or confusion can erase a human person’s value.

Among other things, this means that the human body is a good thing. As Roberts explains, contemporary gender ideology is predicated on the idea that how we feel—our mind and emotions—is a superior mode of existence than our physical bodies. But according to Scripture, this negative attitude toward our physical bodies is wrong. “Our bodies are an essential part of our true selves,” Roberts writes. “So what I feel about myself can never be the whole picture, because God made us embodied souls. Our bodies are essential in determining and revealing who we truly are” (39).

The reason discussions about gender identity are often emotional and volatile is that they aren’t really just discussions over competing philosophies or political worldviews, but rather are two very different “stories” about what it means to be a person. For the transgender-affirming, gender is an extension of self-determined identity. Any sexual or gender expression—so long as it does not violate someone else’s autonomy—is morally valid, because to suggest otherwise would be to demean someone’s humanity. But for the Christian, gender is part of God’s design for how we, body and spirit, reflect the image of the Creator.

Our deepest desires and our most fundamental notions of self-identity don’t need blanket affirmation; they need resurrection.

This is good news, because our physical selves are not just created inherently good. They are also disordered because of sin. All of human existence is under the influence of Adam’s rebellion against God. As Roberts writes, those who believe in the Fall ought not be shocked when we experience its effects, such as disharmony between our actual bodies and our mental perception of ourselves.  Our deepest desires and our most fundamental notions of self-identity don’t need blanket affirmation; they need resurrection.

What the Gospel Offers

That is precisely what the gospel offers. The gospel rescues us, body and soul, through the perfect righteousness and perfectly authentic humanity of Christ Jesus. United to him by faith, we’re made right with God and (progressively) made right with others and ourselves. Those who are in Christ, Roberts writes, aren’t promised an end to all their struggles. Gender dysphoria is a real effect of the fall and will not be totally ended until Christ returns to finalize the new creation. As Roberts explains,

[T]hey have been promised the presence of the Holy Spirit, who assures them of their new identity as God’s children, and gives them a new longing to please him. That will involve recognizing that what ultimately matters is not what my feelings may say about myself, but who God made me to be, which is who I will be in the resurrection. My origin and destiny in Christ should therefore affect how I love now. And that origin and destiny includes my body. (60–61)

In a culture that valorizes self-expression and anathematizes transcendent moral norms, this message often sounds incredibly destructive. In reality, it’s good news, because it affirms what we all sense in our most honest, most transparent moments: that something is broken about us and the world and we can’t fix it on our own. Confusion about our bodies, our sexuality, and our identities point us toward the reality that we weren’t made merely for ourselves. We were made for a Creator, and, as Augustine said, we are restless until we rest in him.

In Christ, we have peace, because through his blood we are reconciled to our Creator and receive our permanent identities as sons and daughters. When Paul says that in Christ there is neither now male nor female, he doesn’t mean the gospel has erased our genders, but that our adoption into the family of God supersedes all other identities. That is what we need—not a surgery to “free” us to be who we “really” are, but a new birth that transforms us into who we were always created to become.

That is what we need—not a surgery to “free” us to be who we “really” are, but a new birth that transforms us into who we were always created to become.

Modern gender ideology promises happiness if we’ll just listen to our desires and cast aside any physical hindrance to them. To a fragmented, confused, and lonely generation, such a promise raises high hopes. But the sexual revolution has never fulfilled any of its promises, and it never will. As the church, we can offer the world a true and lasting promise, and a name even better than sons and daughters.