It is difficult to find scholars who are experts in both Patristic and Reformation studies. Scholars who are experts in one of the two tend to be helpful in their area and anachronistic of the other. However, those who have read anything by Robert Letham know that he is one of those unique scholars. His works, ranging from Christology to Eastern Orthodoxy, all display a vast knowledge of Patristic to contemporary sources.

Letham displays the same aptitude in his new book The Westminster Assembly: Reading its Theology in Historical Context. Part 1 and 2 of his work puts the Assembly in its historical and theological context—exhibiting the purpose of the Assembly to be both theological and political. With this context in mind he puts forward a concise explanation of the theology of the Assembly in part 3. Letham has two general purposes for the book. First, by putting the Assembly—along with its confession and catechisms—in its historical context, he seeks to clear up misunderstandings of Reformed theology that are based on chintzy historical scholarship, especially in the Calvin and the Calvinists debates. Second, through the use of new primary resources that include meeting minutes and debates among the Assembly members, Letham illumines why certain directions were taken and corrects historical misreadings of the documents by those critical and sympathetic to its conclusions.

Throughout the book, Letham targets individual scholars as sparing partners—Karl Barth, T. F. Torrance, and, briefly, Alister McGrath—who have been critical of the Assembly, accusing it of fundamentally diverting from the theology of Calvin and the early reformers. The so called radical division between Calvin and the English Calvinists lays mainly in the development of Reformed scholasticism, where doctrine was deduced by logical syllogisms, rather than Scripture. English Calvinists of the 17th century are accused of surmising their theology from the premise of God’s eternal decree and a demarcated two-covenant system. Surprisingly, Letham interacts very little with R. T. Kendall’s work on Calvin and English Calvinism.

For many of these accusations, Letham is able to respond by displaying how little attention is given to historical context. So many contemporary debates are put back into the Assembly, that often times scholarly conclusions have shown to be anachronistic. Other times, Letham argues that many fail to read the Assembly’s confession along with its catechisms, to which Letham adequately shows the two must be read together. Also, Letham was able to persuasively show how involved the rest of the continental Reformed churches were in the work of the Assembly, revealing that the breed of Calvinism the Puritans had was not limited to the British Isles. 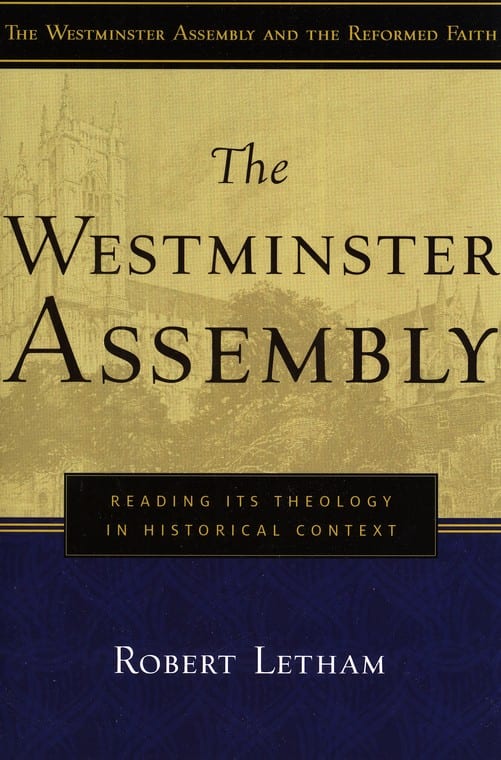 Drawing on new primary source material, Robert Letham considers the Assembly’s theology in terms of the unfolding development of doctrine in the Reformed churches and in connection with the preceding and current events in English history. His book asks exactly what the divines meant at each stage of their task.

He also spars with A. A. Hodge and B. B. Warfield and their commentaries on the work of the Assembly. Hodge and Warefield’s works are obviously sympathetic to Westminster and aim to uphold its tradition. Yet, Letham points out conclusions by the two that fail to accurately read their theology in their historical context. Also, meeting minutes clear up many questions or disappointments that, both, Hodge and Warfield had concerning conclusions made or directions taken by the Assembly.

The most fascinating aspect of Letham’s book was the theological diversity among the Assembly members that the debates revealed in the meeting minutes and other new primary sources that have had little contribution to past Assembly scholarship. Contrary to popular understanding, the Assembly members were not a static group, theologically. Rather, fierce debates lasted weeks over a range of topics, from the extent of the atonement, the Covenant of Works, the question of the imputation of the active obedience of Christ, and so forth. What these new primary resources reveal, in fact, is that the heart of the Assembly was theology, rather than ecclesiology, which should completely reshape Westminster Assembly scholarship.

Robert Letham’s work sets the table for further great study on the Assembly. His historical corrections and utilization of new primary source discoveries lay a solid trajectory for helpful scholarship. This is the new standard. It has given Reformed Christians insight into their rich heritage and should enrich our understanding of confessionalism.