Historical fiction isn’t new to the church. Most Christian bookstores have a big section devoted to this genre, much of which aims to bring readers back into biblical times. This is a worthwhile endeavor for at least two reasons. First, most believers are interested in the historical roots of our faith. Second, it can provide a method of exploring the context of the New Testament (NT) outside of a topical textbook volume. When done well, readers become better interpreters of the NT.

Historical fiction may be one of the most effective genres for teaching us about the ancient world. Though many topical volumes are excellent and will not be replaced (e.g., Everett Ferguson’s Backgrounds of Early Christianity), they often lack a real-life perspective that helps us learn most effectively. This may be because topical volumes don’t engage our emotions, something best accomplished in the context of a story. Moreover, certain historical fiction can help us grasp vital NT contexts like family, slavery, and religion. In other words, we can learn about cultural practices (e.g., marriage or crucifixion) in a topical book, but when pictured in a narrative with “real” people it has an impact prose discussion lacks. We’re learning without even knowing it.

The genre also has its weaknesses. Given its focus on limited characters, historical fiction must be selective in its portrayal of events and cultural experiences. Of course, topical books are prone to generalizations too, but the engaging nature of a novel increases this danger. Without access to a wide range of characters, the ones we do meet can seem inaccurately universal.

Gary Burge’s A Week in the Life of a Roman Centurion aims to be an entertaining vehicle for learning about the biblical world. Burge doesn’t explicitly state these goals, but they’re implied by the structure and content of the book.

A longtime professor at Wheaton College and an accomplished writer of both careful scholarly works and popular material, Burge is well equipped to incorporate various aspects of the ancient world into his novel. Since the 10 chapters are organized mainly by geography, we have chapters such as “Caesarea” and “From Emesa to Raphana.” About half the book takes place in Capernaum; hence chapters like “Capernaum’s Midwife” and “Capernaum’s Synagogue.”

The story begins with the Roman army crushing the ancient city of Emesa. We’re introduced to Tullus, a young student captured by the Romans. He becomes the slave of Appius, the conquering legion’s top centurion. Appius is a strong, confident, effective leader. He has the respect and fear of the troops and anyone else with whom he comes in contact. Appius is a true Roman. Early on, though, he suffers an injury that demands he step down from his prestigious position. This threatens his understanding of himself and his place in the Roman world. 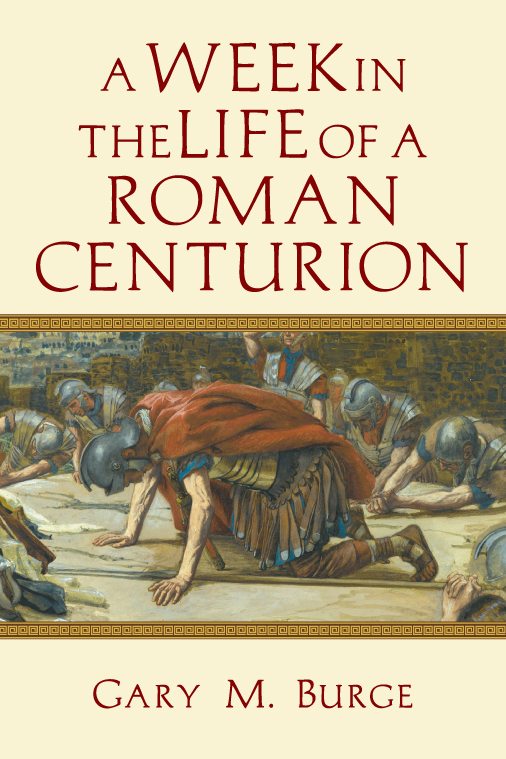 A Week in the Life of a Roman Centurion

A Week in the Life of a Roman Centurion

Appius leads a household in which his new slave (Tullus) joins his chief slave (Gaius) and his concubine (Livia) as they navigate their roles and relationships amid the uncertain circumstances that result from Appius’s injury. Appius cares deeply for these people. Further, we see these relationships continue to develop in the foreign Jewish city of Capernaum that lead to the story’s climatic end. Burge embeds excellent historical and cultural information into the narrative—the shame one might have over his circumcision (80), the Jews’ abhorrence of idolatry, and their Gentile-related concerns are all vividly illustrated (80, 114–15, 134–35).

In addition to careful historical portrayal, the narrative is compelling and the characters intriguing. Without spoiling the plot, my only suggestion would’ve been to develop Appius a bit more before the final chapter.

Throughout A Week in the Life of a Roman Centurion Burge offers aids to enhance its usefulness. First, text boxes provide useful historical and cultural information and serve to illuminate the narrative, helping modern readers grasp what would have been assumed knowledge in the first century.

Second, there are 44 figures (e.g., pictures and drawings) of ancient items. Although most are both small and black and white (better quality surely would’ve increased the book’s price), they help us get a better “feel” for the narrative.

Third, Burge includes a list of characters (7–8). Unfamiliar names, especially those that at first glance look similar (e.g., Appius, Axius, Albus), are easy to confuse. This list is a helpful reference when a character is reintroduced after a period of time.

A Week in the Life of a Roman Centurion helps us better understand the Roman army, certain biblical cities, and the first-century contentious relationship between Jews and Gentiles. Readers may even think of the historical setting and of characters like Appius and Tullus while reading passages in the Gospels that record Jesus in Capernaum. Such is the strength of this genre and it is executed well by Burge.

But there are weaknesses. First, I wonder if the characters reflect our modern concerns too much. In some ways the book read like a love story between Appius and his slave Livia. I wonder how common this would’ve been in the first century. Second, we don’t really get a glimpse of a more standard Roman familia (family), which would have included generations of members, siblings, and so on. Again, Burge’s focus on a soldier’s life deemed such aspects less important.

Third, and most importantly, the picture Burge presents of ancient slavery could be misleading. There certainly was a significant variety of slave experiences in ancient Rome, but the horror of the institution is lacking. Even the experience of Tullus’s capture is quickly forgotten as his new owner protects the young slave from soldiers who mean to do him harm. Later in the story, Appius takes Tullus out on the town for a kind of “guys day out” in which they attend a gladiator event (70–76). They appear more like buddies than master and slave. (Burge’s reason for this portrayal is clear by the end of the story.) Also, Livia’s isn’t so much an exploited young slave as she is a cherished girlfriend, mistress, or even wife. I hope there were many masters like this in ancient Rome, but I suspect the average slave hearing “slaves, obey your earthly masters with fear and trembling” (Eph. 6:5) wouldn’t have had it so well. Burge likely wanted to keep the story’s content rather tame so as to not limit readership, but this portrayal perhaps could’ve been balanced with the addition of another slave character whose master wasn’t so sympathetic.

My criticism doesn’t detract from the value of A Week in the Life of a Roman Centurion. No novel can do it all. It is well written and contributes to a growing number of volumes in this genre. Taken as a whole, they can provide an excellent introduction into the complex world of the NT.

Biblically focused historical fiction must be taken seriously by scholars and publishers alike in order to maintain its effectiveness. For this genre to succeed, it will need to learn to balance careful scholarship and engaging storytelling like Burge does in A Week in the Life of a Roman Centurion.