What is conversion? Theologian Wayne Grudem defines it as “our willing response to the gospel call, in which we sincerely repent of sins and place our trust in Christ for salvation.” True as this definition may be, somehow it seems colorless in light of conversion not so much defined but demonstrated in Rosaria Champagne Butterfield’s coming-to-faith memoir, The Secret Thoughts of an Unlikely Convert: An English Professor’s Journey into Christian Faith. Conversion for Butterfield is a thoroughly disrupting transformation—a whole-life, whole-person turn toward Christ.

Though I understand why one online bookseller features books about homosexuality as related resources on the webpage for this book, this isn’t a book about homosexuality. It doesn’t address the debates regarding whether one is born this way or chooses this life or whether same-sex attraction can be “cured.” Neither does it offer strategies for arguing against or evangelizing someone in the lesbian lifestyle. While the book does illumine these issues, it just isn’t about them. It is about one woman’s becoming convinced that the claims of the gospel are true, and the thorough reordering of her life around them.

Butterfield was certainly not searching for God when he found her. She felt no great void or desire for change. Instead, she was working on a book on the rise of the Religious Right in America and the “hermeneutic of hatred that the Religious Right uses against their favorite target: queers, or at the time, people like me” (6). After her critique of Promise Keepers appeared in the local newspaper, she received a stack of hate mail and fan mail, as well as a kind and inquiring letter from a local pastor that she just couldn’t throw away. So began a conversation that continued for two years before Butterfield ever stepped foot in a church. “I couldn’t come to church—it would have been too threatening, too weird, too much. So Ken was willing to bring the church to me” (11). As we read the story, our desire grows to be as hospitable and humble as the pastor and his wife who loved and listened to her. And what was her experience when she did finally go to church? “These people with their complete marriages, their kind children, their well-spent lives, cast a reflection on the legacy of my choice making” (71). Once again, as we read it, we find ourselves wanting to make sure that the awkward outsiders who come to our churches feel welcomed and wanted instead of shunned and condemned.

“I did not perceive conversion to be ‘a blessing,’” Butterfield admits. She writes with refreshing honesty and straightforwardness that permeates the entire book. “It was a train wreck. . . . Conversion put me in a complicated and comprehensive chaos. I sometimes wonder, when I hear other Christians pray for the salvation of the ‘lost,’ if they realize that this comprehensive chaos is the desired end of such prayers” (27). 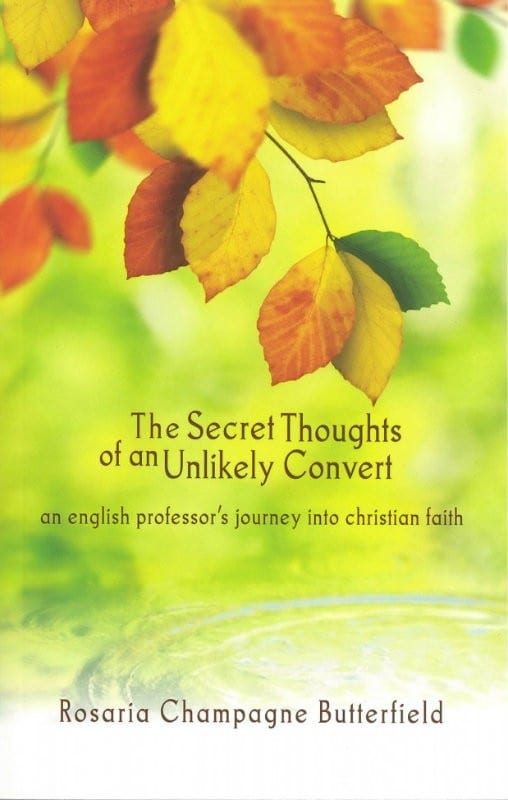 The Secret Thoughts of an Unlikely Convert : An English Professor's Journey into Christian Faith

The Secret Thoughts of an Unlikely Convert : An English Professor's Journey into Christian Faith

In her late 30s, Rosaria encountered something that turned her world upside down—the idea that Christianity, a religion she had regarded as problematic and sometimes downright damaging, might be right about who God was. That idea seemed to fly in the face of the people and causes that she most loved. What follows is a story of what she describes as a train wreck at the hand of the supernatural. These are her secret thoughts about those events, written as only a reflective English professor could.

Butterfield came to the realization that she’d spent some of her best years steeped in the wrong worldview. “God saved me, but hadn’t lobotomized me. My deep patterns of thinking and interpretation were also suspect to sin. That [became] painfully evident to me” (80). Readers are invited into the interior of the transformation of what she thinks and how she feels, which she describes as settling “into the hard work of turning the pages of my heart, holding each one open and naked for spiritual scrutiny” (74). And, of course, this is the comprehensive process of sanctification each of us is called to, the hard work of working out our salvation (Phil. 2:12–13).

Butterfield sets out to find the root of her sin so that she might repent of it, a search across the terrain of Scripture. Her exposition of the root sin of Sodom, which she delineates as pride, wealth, entertainment-driven focus, lack of mercy, and lack of modesty, leads her to the conclusion that “sexuality isn’t about what we do in bed. Sexuality encompasses a whole range of needs, demands, and desires. Sexuality is more a symptom of our life’s condition than a cause, more a consequence than an origin” (31).

Her insight invites readers to share in her repentance rather than merely observe it from a distance. “My sexuality was sinful not because it was lesbian per se but because it wasn’t Christ-controlled. My heterosexual past was no more sanctified than my homosexual present” (33).

While voyeuristic details on life “before” are appropriately limited, Butterfield’s experience of “coming out” as a believer is vivid and compelling. Butterfield had been a lesbian postmodernist when the graduate school that employed her as a tenured English professor asked her to deliver the opening lecture to all incoming graduate students. But six months later, when she delivered the lecture, she was a fledgling follower of Jesus Christ. Butterfield not only includes the fascinating text of her lecture but also takes readers into the personal and professional crisis of giving the lecture that made her a “traitor” and “turncoat.” Butterfield writes, “I lost my community when God saved my soul (49),” and readers feel the loss with her.

Though Butterfield lost her old community when she was claimed by Christ, it is clear she has been fully embraced into a new community, particularly the Reformed Presbyterian Church of North America. And if there is one aspect of the book that perhaps weakens it, it is Butterfield’s investing half-a-chapter in defending the denomination’s commitment to exclusive Psalm-singing in worship, writing, “God commands us to sing Psalms in worship to the exclusion of man-made hymns” (94). To Butterfield it is simple: “If God gave us a book of praise songs, who are we to add to them?” (92) But, of course, to many other it is not quite this simple.

This book made me laugh. Butterfield’s agility with words and ideas evidences her history as a tenured English professor, yet is never off-putting. Speaking of her life now as a pastor’s wife and mother to several adopted children, she writes:

We have a minivan that Kent has christened the Traveling Garbage Can. I have been known to clean out this van by sending in my trusty Golden Retriever, Sally, to fetch old PB&J sandwiches, juice boxes, and pizza crusts. Sally is the same age as my youngest daughter; it was like having twins separated by species. Sally was housebroken with then-3-year-old Knox, because in my world, that is what summer and backyards are for (131).

This book also made me wince. Preparing to give her “testimony” for the first time, Butterfield wonders:

Here the book indicted me for taking many days off from dying to self. How tragically we tame the call of the gospel, swallowing a religion of fitting God into our lives rather than making him our life. The nutshell version of Butterfield’s conversion and the heart of the book is this: “I lost everything but the dog” (63). But it is clear that in losing everything, she has found everything that really matters.

Nancy Guthrie teaches the Bible at her home church, Cornerstone Presbyterian Church in Franklin, Tennessee, as well as at conferences around the country and internationally, including her Biblical Theology Workshops for Women. She is the author of numerous books including her most recent, Saints and Scoundrels in the Story of Jesus and her upcoming, God Does His Best Work with Empty. She is the host of the Help Me Teach the Bible podcast at The Gospel Coalition. She and her husband host Respite Retreats for couples who have faced the death of child and are co-hosts of the GriefShare video series.