We’re all hoping the coronavirus pandemic ends soon, but when it does, we’ll face a deeper wound in modern society: the epidemic of loneliness.

My family and I witnessed an eerie portrait of modern disconnection in the first few weeks after the lockdown began. After those initial weeks of panic-buying toilet paper and figuring out how to use Zoom for work and school, many Americans, including those in my neighborhood, suddenly had a lot of free time. There was nowhere to drive, nothing left to binge-watch, and Zoom fatigue was starting to settle in. This boredom led a lot of people to the outdoors, and suddenly there were families and bikers and picnickers on every street and sidewalk.

For a moment, it felt as if our neighborhood was transforming into a kinder, slower, gentler world, one that recalled a time when “everyone knows your name” (from the 1980s show Cheers). But then the reality hit that my neighbors were practicing social distancing too, going out of their way to avoid contact with other people.

The strangeness of pandemic social interaction exposes a problem that Eric O. Jacobsen describes and diagnoses in Three Pieces of Glass: Why We Feel Lonely in a World Mediated by Screens. 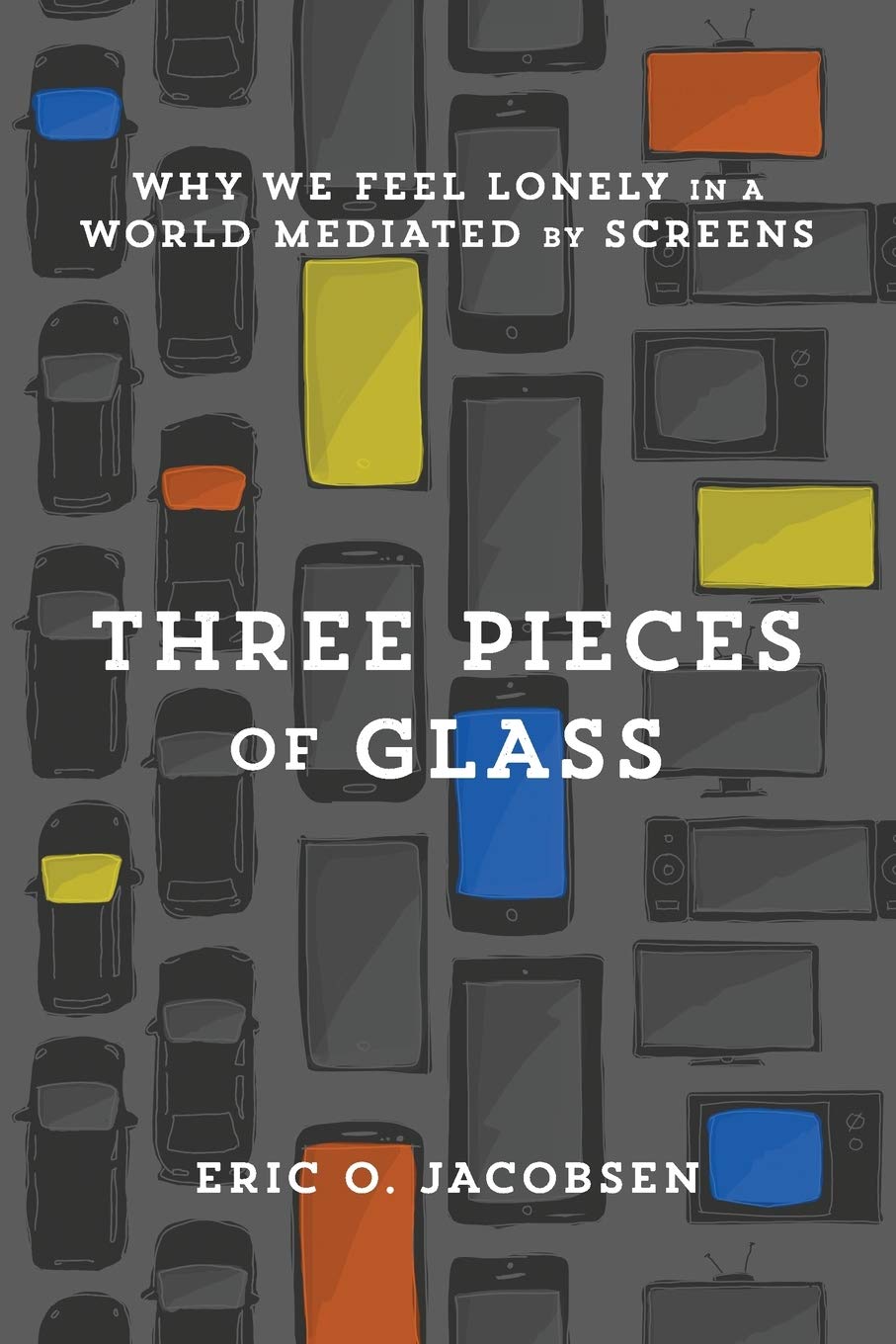 Three Pieces of Glass: Why We Feel Lonely in a World Mediated by Screens

Three Pieces of Glass: Why We Feel Lonely in a World Mediated by Screens

Loneliness is increasingly recognized as a major public health crisis that is on the rise and impacting people of all ages. Addressing the crisis of loneliness from a fresh perspective, this book introduces belonging as an overlooked but critical aspect of a flourishing Christian life.

Based on the title and cover, one might think the book fits within the usual discourse about the problems of modern technology. Indeed, two of the three pieces of glass Jacobsen examines are the phone and the television. He writes:

Smartphones provide a too-convenient distraction, pulling us away from spontaneous face-to-face interaction with the people we encounter in everyday life. Smartphones erode precepts of civility and can dimmish our humanity as we make unkind comments about others on social media. And smartphones direct our empathy and instinct for connection toward people we’ll likely never meet in person while causing us to ignore those with whom we could enjoy a real relationship involving risk, trust, and shared intimacy. (189)

But Jacobsen—senior pastor of First Presbyterian Church in Tacoma, Washington—argues that another piece of glass, and the policies and structures that surround it, may be a more powerful contributor to the kind of society we’ve become and the deep, unfulfilled longings many of us experience. This piece of glass is the car windshield, which mediates relationships and community in ways many of us have been inculcated to ignore. “We live in a culture that is experiencing a profound crisis of belonging,” he observes, “largely because we have insulated and isolated ourselves from people, place, and story by encasing ourselves behind three pieces of glass—windshields, TV screens, and smartphones” (251).

Jacobsen quotes Marina Keegan: “We don’t have a word for the opposite of loneliness, but if we did, I could say that’s what I want in life” (103). The closest concept to describe what Keegan longs for is “belonging,” and Jacobsen spends much of the first half of the book exploring this idea biblically and theologically, drawing on themes of shalom and displacement, homecoming and invitation, redemption and placemaking.

One of the key distinctions he makes is between private belonging, which we find in intimate personal relationship and which often happen within our homes, and civic belonging, which takes place in public and social settings. He argues that the civic sphere is an important part of the Christian conception of society, because it is one of the places where we “seek the welfare of the city” (Jer. 29:4–7).

Since the 1950s, American neighborhoods and cities have been built in such a way that prevents civic belonging from emerging.

But Jacobsen points out that since the 1950s, American neighborhoods and cities have been built in such a way that prevents civic belonging from emerging. Instead of walkable neighborhoods where one might pass a few restaurants, a barber, and a bookstore on the way to school or church, modern suburban neighborhoods have been zoned to separate residential and commercial areas. The goal was to provide safety and inexpensive housing, but it resulted in a world where cars and parking lots dominate our landscape and lives.

Americans now take an average of 10 car trips per day, going from house to school, work, church, the gym, the grocery store, kids’ practice, and home again. When we arrive home, we often enter through a garage door, which enables us to avoid encountering our neighbors. Having spent the day seeing our city mediated through a car windshield, we then turn on the TV to watch people talk, or pull out our phone to interact with people around the world. Jacobsen is, in a sense, saying that phones and social media didn’t create a new problem; they filled a void of belonging created decades before by pre-digital technologies and policy decisions.

What, then, might a Christian do to help restore a world of belonging?

Jacobsen realistically warns that enacting change at the policy level is difficult and that some ideas, such as a call center for loneliness, don’t always do as much as hoped. He also encourages us to avoid a nostalgia for returning to Eden, reminding us that the trajectory of the biblical story is toward a garden-city. He walks through examples of how choices in our home-buying and neighboring can reconnect people and form new civic spaces for interaction and shared stories. He encourages churches to incorporate the ideas from a parish model, shifting from a mere building to which people drive toward a place connected to the people and businesses around it.

There are excellent books on loneliness and technology, place and space, neighboring and zoning, church outreach and civic engagement. But Jacobsen brings these themes together in an extremely helpful and hopeful way. He compels us to consider not just how we can avoid wasting our lives on our phones, but how we can participate in creating spaces where belonging can emerge. Taking some of the intentional steps he offers may help open up spiritual conversations where we can point our neighbors to the God who knows their name.

John Dyer (PhD, Durham University) is a dean and professor at Dallas Theological Seminary and the author of From the Garden to the City: The Redeeming and Corrupting Power of Technology (Kregel, 2011).