Next year marks 500 years since Martin Luther sent his 95 theses—a list of critiques and corrections to abuses he saw in the Roman Catholic Church—to the archbishop of Mainz. The story goes that he not only sent these to the archbishop, but also nailed them to the door of All Saints’ Church in Wittenberg, Germany.

As 2017 approaches, a plethora of books are being published on the Reformation, with more on the horizon. But of all the forthcoming Reformation love, The Unfinished Reformation: What Unites and Divides Catholics and Protestants After 500 Years is a unique contribution. While most other books and studies will be celebrating the history and legacy of the Reformation, Gregg Allison (professor of Christian theology at the Southern Baptist Theological Seminary and author of Roman Catholic Theology and Practice: An Evangelical Assessment) and Chris Castaldo (pastor of New Covenant Church in Naperville, Illinois, and author of Talking with Catholics about the Gospel) ask a burning question: Is the Reformation actually over?

The authors begin with an introduction that offers an overview of the Reformation. The first chapter then notes two important considerations in studying the beliefs of Catholics and Protestants. First, we must remember most everyday believers who identify as either Roman Catholic or Protestant aren’t overly concerned with official doctrinal statements. Instead, “doctrinal beliefs are forged in the crucible of human experience and how they find expression through our neighbors, friends, and loved ones” (31). For example, modern Catholics might in some ways be more like their Protestant neighbors than one might have imagined 500 years ago. Citing the work of Mark Noll and Carolyn Nystrom, the authors give a few reasons for the narrowing gap:

[The Second Vatican Council’s] new ecumenical spirit, the increased importance of the role of the laity, the legacy of Pope John Paul II (updated to include the papacies of Benedict XVI and Francis), the changes in world Christianity, the burgeoning charismatic movement, and developments in American culture, including collaboration with evangelicals. (40)

Second, however, we can’t undervalue the key doctrinal chasm that remains between Catholics and Protestants: the nature of the church. “This is still the case because the Catholic Church regards itself as Christ on earth with divine authority to forgive sins and impart sanctifying grace” (41). In fact, this divide was the genesis of the Reformation itself. Luther saw Rome standing in the place of God—or at least too close to his transcendent reality—by elevating the authority of the pope and marketing grace through indulgences. So, at least in official church dogma, there’s still no bridge over Reformation waters.

With these considerations at the forefront, Allison and Castaldo proceed to discuss more specifically “the ways Catholics and Protestants continue to stand together, and where they stand apart” (42). 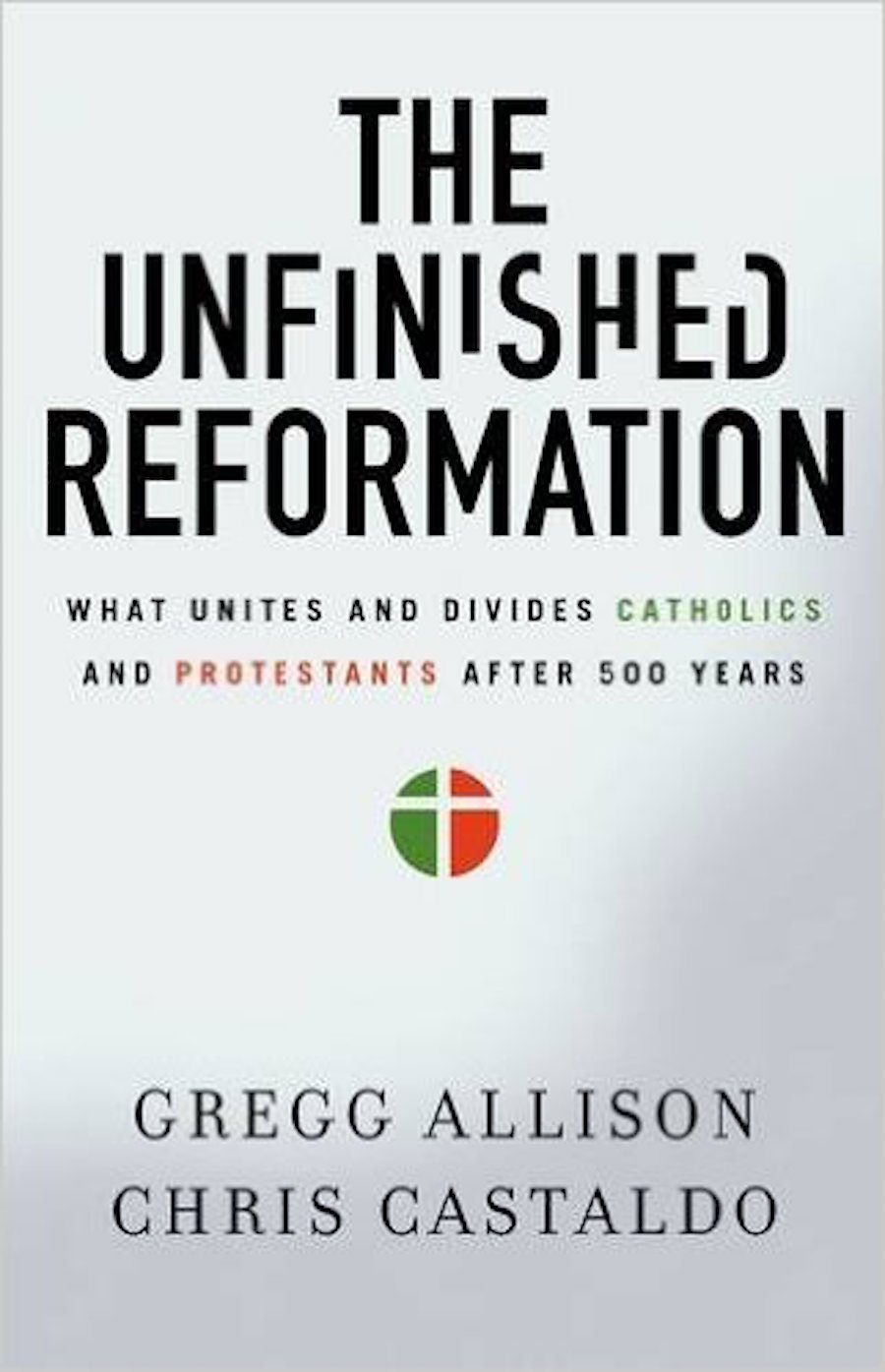 The Unfinished Reformation: What Unites and Divides Catholics and Protestants After 500 Years

The Unfinished Reformation: What Unites and Divides Catholics and Protestants After 500 Years

The authors lay out some of the major similarities between Catholics and Protestants (ch. 3). “Despite objections to the contrary,” they note, there’s doctrinal commonality between the two groups via the early creeds—“beliefs that were assumed from the beginning and communicated in the church’s worship services, sermons, catechisms, and writings” (43). This is a fair point, and one that anti-Catholics must acknowledge. Lest we forget, the Catholic Church existed long before the Reformation and was birthed out of the earliest expressions of creedal Christianity.

Some of these shared doctrinal confessions, according to Allison and Castaldo, include the nature and revelation of God, original sin, salvation by God’s initiative, and the church as God’s called-out people. Perhaps one clarification should be made: the Church in Luther’s day seems to have been corrupted quite extensively, and perhaps these theological foundations were shaken at the time. Nevertheless, core Catholic confession still rests on the same creeds Protestants confess today. This is why Luther desired to reform the Church, not destroy it.

In the subsequent four chapters, the authors give extensive attention to the places where Catholics and Protestants stand apart. Notably, they expound on the core difference mentioned above—the Catholic Church sees itself as Christ on earth with divine authority. Because of that, for example, the commonality of God’s revelation becomes disjointed, as the Catholic Church sees itself in direct succession from the apostles. Divine revelation came through and still comes through the tradition of the Church. This also plays itself out in the ways the two groups view Scripture, the sacraments, and the role of works in salvation.

There are many positives to The Unfinished Reformation. The critiques are few. Perhaps the authors could’ve included more historical information or discussed the subsequent holy war between Catholics and Protestants. However, a review is always better suited to engage what’s in the book, rather than what one wishes was included. Let’s discuss just one.

In the end, it seems Allison and Castaldo end up at virtually the same place as Noll and Nystrom: Catholics aren’t (necessarily) heretics, and the two sides principally need to seek ways to find common ground as brothers, even if we are “a divided family” (142). As evangelicals, isn’t Noll and Nystrom’s question truly the most pertinent? Should we not first ask about the state of Roman Catholic souls, and ask where commonalities lie? It seems Allison and Castaldo engage in a bit of nitpicking, even though they end up in the same place. Drawing out their inner-Noll/Nystrom, Allison and Castaldo admit in their closing statements:

[B]eing intentional doesn’t mean we are adversarial or crotchety. In our engagement with Catholic friends and loved ones, we wish to convey the fragrance of Christ—peaceable, gentle, open to reason, full of mercy and good fruits, impartial, sincere, full of grace and truth. (152)

All said, I highly recommend The Unfinished Reformation for its accessible style, clear arguments, and thoroughly informed content. More than that, the authors are to be commended for their refreshing call for charitability toward Catholics.

Brandon D. Smith is assistant professor of theology and New Testament at Cedarville University, editorial director for the Center for Baptist Renewal, and host of the Church Grammar podcast. He is author of They Spoke of Me: How Jesus Unlocks the Old Testament. You can follow him on Twitter @brandon_d_smith.

3 Women Are Not the Problem