Why do we read fiction? Most often it’s for pleasure or escape. It does us good to get caught up in someone else’s story. But fiction also has the power to shape our moral imaginations. It increases empathy and allows us to experience emotionally the outworking of choices we haven’t made or tragedies we haven’t suffered.

Some novels lean so heavily toward the purpose of molding reader sympathies that they forsake any pretense of giving pleasure. The Underground Railroad: A Novel by Colson Whitehead was this sort of book. I steeled myself for it the way I do before reading about the abuse scandal in the Catholic Church or the Rwandan genocide. Sometimes we must look with open eyes at the evil humans can perpetrate themselves or countenance in others.

In this America, each slave state has different laws and different attitudes toward slavery. In Georgia, slaves are mostly treated like animals, except for when the masters use them for sex. South Carolina, by contrast, has a large population of freed men and women and seems to be effectively bettering the lives of former slaves. But even there, evil is at work below the surface. Then we meet the white citizens of North Carolina who’ve decided they’re better off without slaves and institute a “final solution” of state-sanctioned lynching. This isn’t bedtime reading. 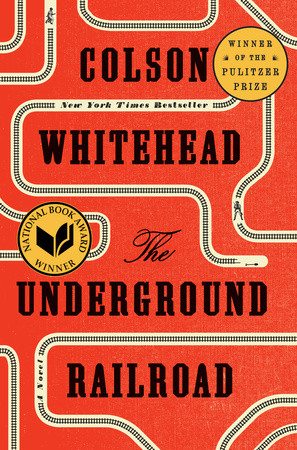 The Underground Railroad: A Novel

The Underground Railroad: A Novel

Winner of the Pulitzer Prize and the National Book Award, the #1 New York Times bestseller from Colson Whitehead, a magnificent tour de force chronicling a young slave’s adventures as she makes a desperate bid for freedom in the antebellum South.

We see these united states through the eyes of Cora, a runaway slave. On her first journey via the railroad, her guide tells her to look outside as she travels if she wants to see “the true face of America.” Looking through the boxcar slats, Cora realizes that, from an underground train, you can’t see anything: “There was only darkness, mile after mile.” Yet in seeing only darkness, she is seeing a true picture of the country.

One thing I appreciated about Whitehead’s portrayal of human nature is that the evil in the book isn’t limited to slavery itself. Any slave narrative is a story of, in the novel’s words, “misery tucked inside misery.” Even as the masters hurt the slaves, the slaves hurt each other. They’re not portrayed as innocent one-dimensional victims, but as men and women at times ruled by jealousy, lust, and fear. Of course, they can be kind and generous, too. But to portray enslaved characters as saints (as some abolitionist literature did) undermines the more important message that they’re people.

The Underground Railroad lacks hope, even when read with the knowledge that, surely, abolition must come to this America as it did to our own. Despite the fact America’s slaves were emancipated more than 150 years ago, I’ve no doubt Whitehead would say African Americans feel the effects of slavery every single day.

America hasn’t fully freed itself from what Whitehead calls “unstoppable racial logic.” In the novel, the logic of the slaveholder says that because the white man has dominion over the African, God must have given him that dominion. In 21st-century America, we too often assume that those born into privilege are the deserving, without taking into account the generational effects of enslavement and Jim Crow on those we label “undeserving.” Whitehead is too good at his craft to spell out modern-day implications of our country’s dark history, but they reveal themselves.

We too often assume that those born into privilege are the deserving, without taking into account the generational effects of enslavement and Jim Crow on those we label ‘undeserving.’

Though most critiques have applauded the allegorical nature of the story, one difficulty I had was the suspicion that the choice to tell an alternative history worked against Whitehead’s purpose of designating slavery as America’s original sin. While I don’t doubt the picture Whitehead draws of slavery was based on careful research, the fact that the slaves were traveling via a literal railroad in an imagined setting undermined its realism. The portrayal of an alternative North Carolina and South Carolina could lead the uncomfortable reader to tell herself that Whitehead must also be depicting an alternative slavery.

I couldn’t read a story about the darkness of slavery without meditating on the contrast between spiritual slavery and freedom.

One character says, “A free black walks different than a slave.” In the midst of a story about the ugliness of the human heart, these words gave me hope. A curved spine developed from years of cotton picking doesn’t leave a freed slave overnight. But in the novel, we do see freedmen striving to walk upright while they learn to read, write, save money, and carry on trade:

Some still bore the marks of plantation behavior, eager to redress perceived slights and acting as if they still lived under the yoke of reduced resources, but these men improved every week, fortified by the possibilities of their new lives.

The depiction of a slave learning to live free made vivid for me Jesus’s words in the Gospel of John: “Truly, truly, I say to you, everyone who practices sin is a slave to sin. . . . So if the Son sets you free, you will be free indeed” (John 8:34, 36). Just as a slave wants to rid himself of the posture of his captivity, we should seek to put off the sinful desires that once enslaved us.

This portrayal of the changes brought by freedom should impel us to live as those not captive to the sin of racism. . . . We must strive with our whole being to unlearn the habits of mind and heart that have been with us for generations.

Please don’t imagine I mean to spiritualize the message of the book in a way that makes the racial implications less acute. Rather, this powerful portrayal of the changes brought by freedom should impel us to live as those not captive to the sin of racism. We must learn the generosity that comes from an unlimited spiritual inheritance. We must strive with our whole being to unlearn the habits of mind and heart that have been with us for generations.

I don’t have tremendous hope for the deep wounds from slavery and racial injustice in America to be healed soon. But I long that we—as the black, brown, and white children of God in this country—will use our freedom to give attention to one another’s wounds, in confidence and love, without fear of injury.