Evangelical Christianity and conservative Republican politics are inherently selfish, Terry Heaton argues in The Gospel of Self: How Jesus Joined the GOP. When those ideologies united in the Reagan era to produce the Christian Right, the self-centeredness was only magnified.

Heaton has a credible claim to knowledge on this subject, because in the 1980s he was the executive producer of Pat Robertson’s television show, The 700 Club.

Critiques of the Christian Right from disillusioned leaders who’ve left the movement (e.g., Blinded by Might andTempting Faith) have been appearing for years, and at first glance Heaton’s book seems merely to be the latest addition to the genre. These books tell a similar story: Beguiled by the false promise that they could change the culture through partisan politics, evangelicals began acting just as cynically and unethically as any other political group. In the end, they received almost nothing for their efforts, since their political activism didn’t stop abortion, homosexuality, pornography, or secularism. 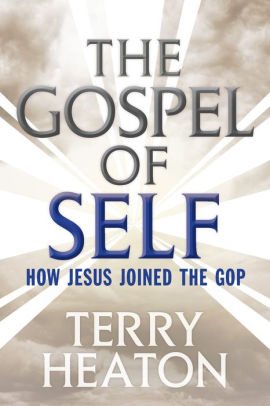 The Gospel of Self echoes these themes, but it adds one insightful addition to this standard narrative: Evangelicals were attracted to the Republican Party because of a self-centered framework inherent in evangelical theology itself.

Prosperity Gospel and the Christian Right

According to Heaton, the central appeal of the type of evangelicalism he was associated with—the charismatic evangelicalism of the 1980s—was its promise that the individual believer could have a better life by trusting Jesus. The 700 Club, like the churches of which Heaton was a part, promised viewers financial prosperity and good health, along with personal salvation, if they would commit themselves to the Lord.

Robertson’s zeal to associate Christianity with health and successful living was so great that he refused to allow overweight people on his television program, believing they offered a bad testimony to Jesus’s power to heal. He put relentless pressure on his staff to find evidence of people who had been miraculously cured through his ministry, but for every genuine healing there were numerous cases of people whose prayers for deliverance from sickness went unanswered.

Regardless of whether there was truth in the promise of health and wealth through Jesus, the promise itself was self-centered. People were told to believe in Jesus because of what Jesus would give them.

Heaton isn’t surprised that many people who became personally successful by embracing the prosperity gospel’s message were attracted to a conservative Republican philosophy of self-help that blamed the poor for their poverty and asserted that the wealthy deserve a tax break and should keep their hard-earned money. The Republican Party’s economic philosophy may have been a far cry from the original message of Jesus, Heaton avers, but it wasn’t far removed from the prosperity gospel of late 20th-century evangelicalism.

Whenever we replace the gospel of Jesus with the ‘gospel of self,’ we shouldn’t be surprised at the dismal results.

Nor were the Christian Right’s nationalism and intolerance far removed from this political philosophy. When Robertson ran for president in 1988, he—like other Christian Right activists—melded economic conservatism with religious populism in a self-centered appeal to Christians to take back their national culture through the raw exercise of political power.

The Christian Right continued this quest for the next 30 years. The appeal of Christian Right politics extended far beyond the charismatic movement, but its promise of (political) power for the believer may have had more in common with the prosperity gospel than many Christians would like to admit.

The latest result of the tragic alliance between self-centered evangelicals and avaricious Republicans was the election of Donald Trump, an outcome Heaton considers so appalling it may have largely been why he wrote his critique of the Christian Right at this particular moment, nearly 30 years after his departure from the movement.

What Should Reformed Christians Think?

Many Reformed Christians would probably agree with much of Heaton’s message, but would also add that the only remedy to this self-centered thinking is a Spirit-induced faith and repentance that prompt one to replace selfishness with pursuing God’s glory alone.

This isn’t quite Heaton’s conclusion. Because he’s a perceptive observer of human nature, much of what he says in this book seems to reflect Reformed understandings of human depravity and even, at times, God’s sovereignty. (He’s critical, for instance, of evangelical Christians who think their prayers or actions can manipulate God.)

But in the last chapters of his book, it becomes clear that he’s never discovered Reformed theology and, sadly, perhaps not the gospel either. While he insists he still loves Jesus—even if he’s given up on organized evangelical religion—the form of Christianity he lauds is the postmodern, emergent church movement associated with Brian McLaren.

Heaton finds the emergent church attractive because, after spending years manipulating people’s emotions and behavior through television, he wants nothing to do with slick evangelical programming or self-help promises delivered by well-dressed pastors. Instead, he’s found solace in the decentralized, unpolished simplicity of a postmodern, Jesus-centered spirituality that rejects exclusivity and objective truth claims.

Yet the emergent church is unlikely to offer a solution to religiously justified selfishness, since it lacks a robust theology of original sin and therefore fails to account for the root cause of the problem. In the last paragraph of his book, Heaton concludes: “I maintain a faith in people to eventually get it right, and I think that may well be a part of what we are witnessing today” (206). But from a Reformed perspective, a “faith in people to eventually get it right” will prove a poor antidote to the “gospel of self” if the real source of the problem lies not with Pat Robertson or even modern American evangelicalism, but with the ancient revolt (Gen. 3).

Christians may be disappointed with some of Heaton’s prescribed remedies, but they will find much value in his prognosis and insightful analysis of the reasons for modern conservative evangelicals’ embarrassments in the political arena. As the book reminds us, whenever we replace the gospel of Jesus with the “gospel of self,” we shouldn’t be surprised at the dismal results.