At a moment when sexual harassment scandals have given both the church and society reason to re-examine their assumptions about sexual misconduct, R. Marie Griffith’s historical study of the religious origins of the sexual revolution may be a timely contribution to the conversation. In Moral Combat: How Sex Divided American Christians and Fractured American Politics, Griffith argues the sexual revolution was closely tied to religion and divided American Christianity into competing camps she calls “progressives” and “traditionalists.”

The most interesting part of the story for many conservative evangelical Reformed Christians may be the least familiar—the story of why liberal Protestants moved within 50 years from supporting traditional sexual mores to endorsing sex outside of marriage as a positive good. According to Griffith, the main reason was a sensitivity to women’s rights that the traditionalists lacked.

Griffith begins her story with Margaret Sanger and the debate over contraception in the early 1920s. At the time, the distribution of information about contraception was still illegal under the Comstock Laws, and no Protestant church had yet endorsed birth control. Sanger, the nation’s leading disseminator of contraceptive information, was a political radical antipathetic toward Christianity, but she recognized the political value of securing the endorsement of Protestant clergy for her birth-control campaign. Although Protestant ministers were initially ambivalent, many of them quickly joined because they saw it as a campaign for women’s health, democracy, and science in opposition to Catholic traditionalism, authoritarianism, and poverty.

Subsequent chapters of Moral Combat trace a similar story: mainline Protestants might’ve been initially skeptical about each new stage in the loosening of traditional sexual strictures, but they embraced such changes when they decided they were conducive to gender egalitarianism, healthy relationships, and scientific progress. In the 1930s, a number of liberal Protestants overcame their doubts about D. H. Lawrence’s sexually explicit novel Lady Chatterley’s Lover, even though it celebrated adultery, because they decided its portrayal of extramarital sex as “spiritual” promoted a more authentic view of sexuality than traditional Christian prudery.

In the 1950s, liberal Protestants likewise decided, after reading Alfred Kinsey’s studies of human sexuality, that greater sexual experimentation before marriage allowed both men and women to enter into marriage with healthier views of sex. In the 1960s, mainline Protestants played a leading role in shaping non-judgmental, scientifically based national sex-education curricula—framed around the idea that mutually supportive sexual relationships were naturally good, and that traditional sexual standards that produced feelings of guilt were not. Liberal Protestants’ commitment to women’s rights likewise led them to endorse abortion legalization in the late 1960s, and shortly thereafter, same-sex unions as well.

Griffith intended Moral Combat to serve as a guide to both sides of the religious divide over sex. But the book gives a more nuanced, informative portrait of liberal Protestant sexual progressives than of their opponents, the sexual traditionalists. The book applies the label “traditionalist” to diverse groups who had little in common, such as northern Catholics who objected to contraception (but sometimes accepted interracial marriage) and southern fundamentalists who opposed interracial marriage (but sometimes accepted contraception).

Theologically conservative Christians are likely to disagree with Griffith’s argument that the liberalization of sexual mores was linked to advances in women’s rights, and that traditionalists who opposed the sexual revolution were motivated at least in part by a desire to restrict women’s freedom and maintain hierarchical gender roles. In reality, of course, the sexual revolution has been far from liberating for many women, as many women who have been hurt in sexual relationships outside of marriage have discovered. Today more than half of all single mothers live below the poverty line, and approximately 25 percent of women have been raped. 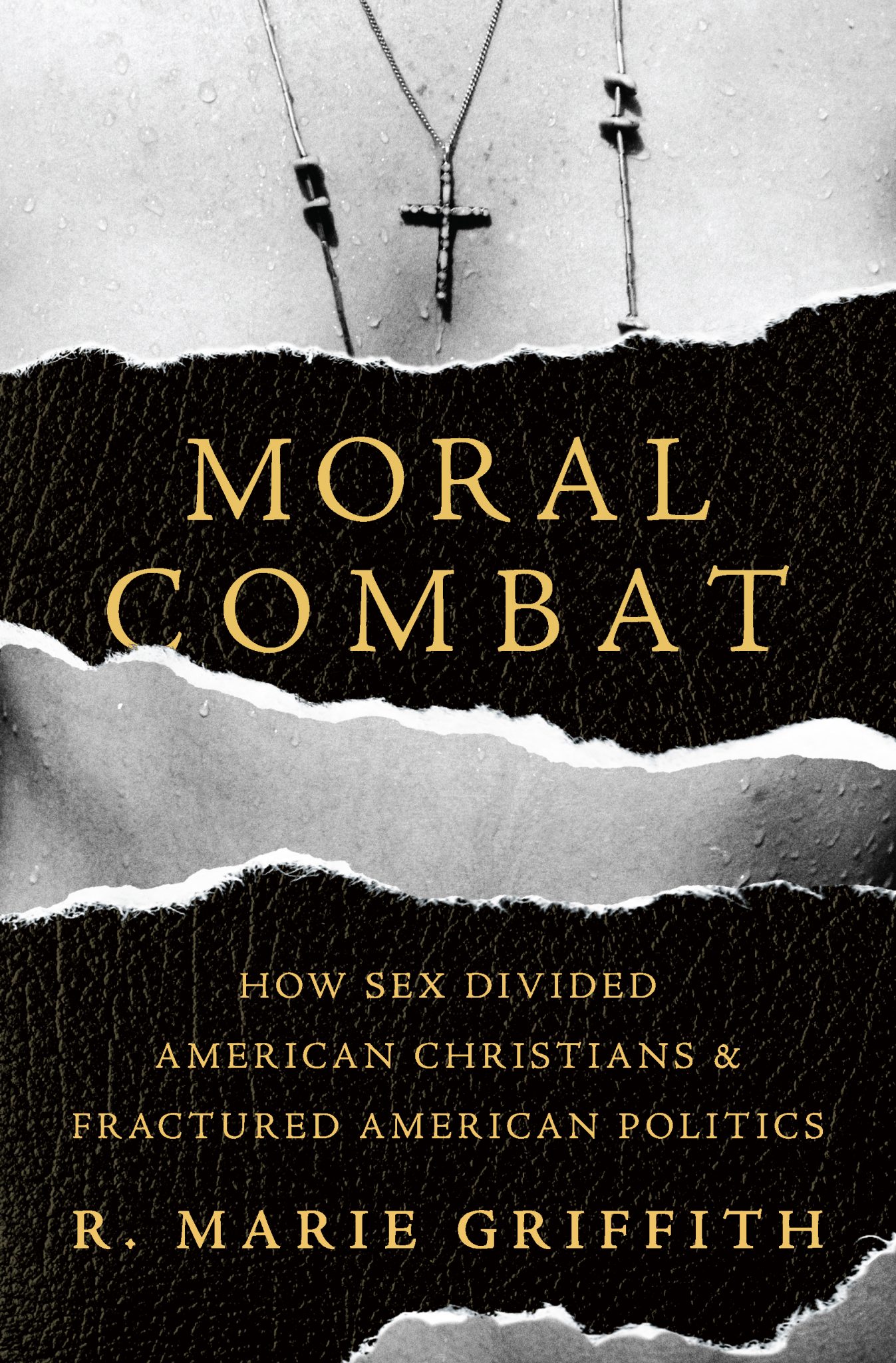 Gay marriage, transgender rights, birth control—sex is at the heart of many of the most divisive political issues of our age. The origins of these conflicts, historian R. Marie Griffith argues, lie in sharp disagreements that emerged among American Christians a century ago. From the 1920s onward, a once-solid Christian consensus regarding gender roles and sexual morality began to crumble, as liberal Protestants sparred with fundamentalists and Catholics over questions of obscenity, sex education, and abortion.

Both those who advocated for greater openness in sexual matters and those who resisted new sexual norms turned to politics to pursue their moral visions for the nation. Moral Combat is a history of how the Christian consensus on sex unraveled, and how this unraveling has made our political battles over sex so ferocious and so intractable.

The sexual revolution has been far from liberating for many women, as many women who have been hurt in sexual relationships outside of marriage have discovered.

The book gives little attention to the many women who opposed the supposedly liberating changes the sexual revolution offered. You wouldn’t know from reading this book, for instance, that women of the early 1970s were far less likely than men to accept premarital sex as morally right. But because Moral Combat explains why liberal Protestants embraced a new sexual ethic, Reformed evangelicals would profit from reading it.

Failure of Both Sides on Sexual Harassment

Most of Griffith’s book highlights the differences between traditionalists and progressives, but on sexual harassment, both sides failed to follow a consistent standard. For both groups, sexual harassment and rape are, in theory, grave violations of a moral code. For traditionalists guided by biblical principles, such extramarital sexual acts represent an egregious misuse of God’s gift of sexuality. For progressives, they are abuses of male power that violate the central progressive tenet that sex must be egalitarian and noncoercive.

But in practice, both sides have sometimes put politics ahead of principle in responding to allegations of sexual harassment. In the early 1990s, Christian Right leaders vigorously defended Supreme Court nominee Clarence Thomas against Anita Hill’s allegations of sexual harassment. They assumed Hill was lying, even though Hill was an evangelical Christian (she’d taught for three years at the law school of Oral Roberts University) whose testimony was corroborated by several other women who had worked in Thomas’s office.

And some conservatives went further, saying that even if Hill was telling the truth, Thomas’s behavior shouldn’t disqualify him from serving on the Supreme Court. Instead of viewing sexual harassment as a sinful product of the sexual revolution—and therefore worthy of their excoriation—they considered sexual-harassment charges a product of feminism. This led them to condemn the female victims of such behavior rather than the male perpetrators.

Instead of viewing sexual harassment as a sinful product of the sexual revolution—and therefore worthy of their excoriation—[conservatives] considered sexual harassment charges a product of feminism. This led them to condemn the female victims of such behavior rather than the male perpetrators.

But the traditionalists and progressives reversed their stances on sexual harassment only a few years later, when the person accused was a liberal. When Paula Jones (who, like Anita Hill, was a product of a conservative evangelical home) accused President Bill Clinton of forcibly kissing and fondling her and demanding sexual favors against her will, conservatives rallied to her defense, while liberals dismissed the allegations. Many on the right began trumpeting the feminist slogans against sexual harassment they had disregarded less than a decade earlier during Thomas’s confirmation hearings.

They could do so because Clinton, unlike Thomas, had long been a symbol of the sexual revolution for them. But most progressives couldn’t bring themselves to join the conservatives’ campaign against a president who was a consistent champion of feminism and abortion rights, so they ignored the multiple allegations of sexual harassment and misconduct Clinton faced and made excuses when he abused the power of his office through a sexual relationship with a White House intern.

Moral Combat is an unsettling book, but it’s highly informative, and some of its challenges may be a dose of historical truth the church urgently needs. For conservative Christians who want to know why the sexual revolution succeeded, understanding churches’ complicity in it is a good place to start.