Our society seems muddled, bewildered, confused, caught in several turbulent crosscurrents that pull it to and fro. On the one hand, we’re expressive individualists who nod our heads when someone expresses distaste for rules and regulations; binary systems box us in and bind us, prohibiting us from fully embracing our own personal narrative.

On the other hand, we’re preening moralists on moral crusades looking to right the great wrongs of the day, ready to cancel anyone who impedes the path of progress and justice. Indeed, that’s precisely what affronts us—the hidebound customs of a bygone age, laws unable to deliver us from—nay, even designed to enshrine—injustice.

Meanwhile, with greater health, comfort, and entertainment options than ever before, our children are more stressed and anxious, suffering one of the highest levels of teen suicide in 20 years. I think of the French sociologist Emile Durkheim’s description of cultural anomie, or lawlessness, where the breakdown of shared social norms, meaning, and cohesion in times of economic and social crisis contribute to a generalized sense of futility, despair, and lack of purpose. 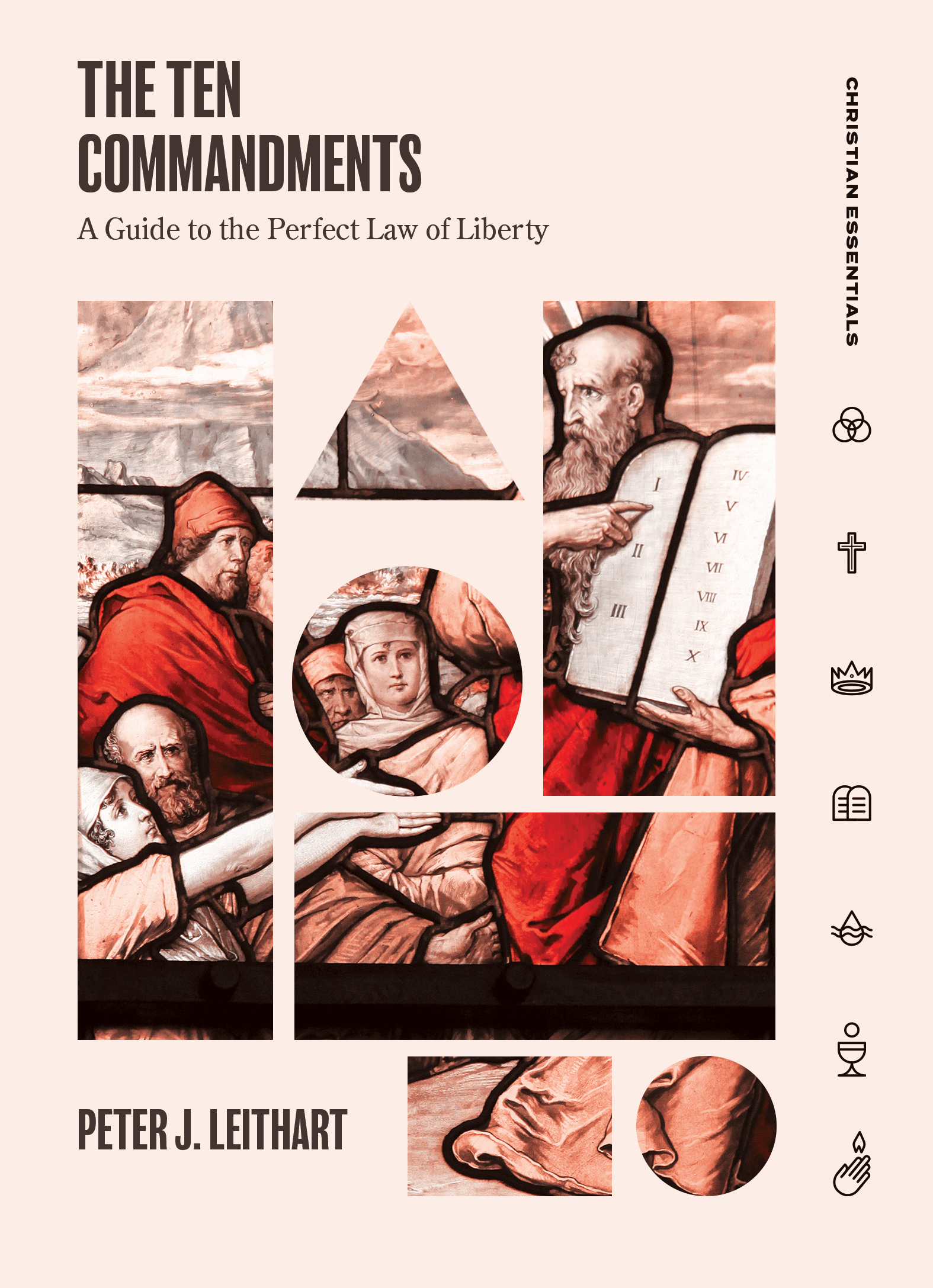 The Ten Commandments: A Guide to the Perfect Law of Liberty (Christian Essentials)

The Ten Commandments: A Guide to the Perfect Law of Liberty (Christian Essentials)

Are these ancient words still relevant for us today? Their outward simplicity hides their inward complexity. Jesus himself sums up the entire law in a pair of commandments: Love God with all your heart, mind, and strength, and love your neighbor as yourself.

Peter Leithart re-introduces the Ten Commandments. He shows us how they address every arena of human life, giving us a portrait of life under the lordship of Jesus, who is the heart and soul of the commandments.

Our society seems muddled, bewildered, confused, caught in several turbulent crosscurrents that pull it to and fro. On the one hand, we’re expressive individualists. On the other hand, we’re preening moralists.

While Durkheim was speaking at broader cultural level, you can sense some of the individual anomie, the psychological anxiety at work in the turn of so many rootless young men and women to lifestyle and self-help coaches, older sisters telling us to wash our faces, or father figures like Jordan Peterson calling us to clean our rooms and bring order to the chaos our lives.

Against that backdrop we might most helpfully hear Peter Leithart’s invitation to receive God’s Ten Commandments, his “Ten Words” as instruction from a Father to a son, in his new little volume, The Ten Commandments: A Guide to the Perfect Law of Liberty.

Words from Father to Son

The architecture of the book is straightforward. Two introductory chapters answer the questions of whether the Ten Commandments are still good for the church (they are), and the right ordering of the commands (essentially, the Reformed numbering with the Eastern inclusion of the preface adduced to the first command). From there we have ten chapters on the commands themselves.

Most important for the whole, though, is the theological architecture delivered in the first chapter. To answer the question of whether these commands are only for Israel, or also for Christians in the New Testament, Leithart—president of the Theopolis Institute in Birmingham, Alabama—sets them within the broader narrative of Exodus and the whole of Scripture, arguing these are Words delivered at Sinai come from Father Yahweh to his son, Israel (Ex. 4:23):

God is a good Father, and he gives direction, purpose, and order to Israel’s life—the boundaries that make for freedom. The Ten Words are “Father-son talk,” telling Israel how he must live if he’s to be a true son, a “filial icon” of God in the world, because they reveal God himself.

God is a good Father, so he gives direction, purpose, and order to Israel’s life—the boundaries that make for freedom.

Yahweh’s Ten Words are, first and foremost, a theological statement. But just for that reason, they’re an anthropological statement, an identity, a program for Israel’s new attempt to be humanity in God’s image. Of course, the Old Testament is largely the narrative of Israel’s continued failure to heed the Ten Words, to understand Father Yahweh, and answer that Adamic vocation.

Thankfully, another Son steps on the scene, the Last Adam, the true Israel, the one who is the spitting image of Father Yahweh, God’s Son in the flesh who fulfills and embodies those Ten Words for us and our salvation. Ultimately, the Ten Commandments are for Christians throughout all ages, since they’re Christological—they testify to Christ, the firstborn Son to whose image we have been predestined to be conformed from all eternity (Rom. 8:29).

With this framework in mind Leithart gives a multidimensional exposition of each command that roots it in Old and New Testaments, the character of God, the mission of Jesus, and perceptively situates the demands of filial freedom in the contemporary age.

For instance, in his chapter on bearing false witness Leithart takes us through dozens of Old Testament legal, wisdom, and prophetic texts to reflect on the importance of truthful speech in all of life. Unsurprisingly, the speaking God thinks words bear weight in the world. Truthful testimony restrains violence against image-bearers (Ex. 23:1; Deut. 19:15–21; James 3:9) and sets the conditions of a just social life (106). Born speechless, we must learn to use our words as Father Yahweh does—to create life (Gen. 1).

Ultimately, the Ten Commandments are for Christians throughout the ages, because they’re Christological.

Of course, in a mediated age, gossip, false witness, slander, and deadly lies are an ever-present danger. We live in a time when prestige can be gained through Twitter-jousts, death-dealing ideologies are propped up by fake news, and careers are torpedoed through digital mobs. This dynamic can even tear through local churches as well-meaning believers get caught up in slanderous disputes.

Instead of embracing a cowardly silence—a false niceness that can’t name sin as sin under the guise of love—Leithart invites believers into the practice of prophetic martyrdom. Boldly loving our neighbors (and our enemies) means speaking the truth as the prophets did (Lev. 18:17–18; 2 Sam. 12), that they might be set free from captivity to the Devil, the father of lies. And this even when it costs our lives. In doing so, we become truth-tellers conformed into the image of “Jesus, the true and faithful Witness” (110).

Words for Readers and Preachers

If I wasn’t clear enough, this an excellent little read. If you’re planning on doing any study on the Old Testament soon, it’s an easy book to go through along with more classic sources. The size, the breadth, and the Christological focus make it a winner for a preaching series resource.

Boldly loving our neighbors (and our enemies) means speaking the truth as the prophets did that they might be set free from captivity to the Devil, the father of lies.

Which leads me to a final word of encouragement to preachers by way of closing. If we’ve been called to pulpit or teaching ministry, you especially have been called to prophetically minister the truth to your congregation. And if you haven’t taught through the Ten Commandments before, or it’s been a while, consider taking them up again in the coming year.

As challenging as it may be to declare unpopular truths about sex, money, or authority, people need to hear a word of paternal instruction. They need direction so that they might not suffer the needless anxiety of our expressive-individualist age. They need the structure of the law and the grace of the gospel as it’s given to us in the Ten Words from Father Yahweh at Sinai. They need to know God. They need to see Jesus.

2 On Daughters and Dating: How to Intimidate Suitors

3 The FAQs: What Christians Should Know About QAnon

5 Dress Your Best for Jesus

The Greatest Danger for Dating Couples