In my first decade of pastoring, I stood outdoors visiting a talkative widower. As the trees swayed in the wind, he mused about lessons learned pondering trees. He hypothesized their growth depended on wind moving sap through the capillaries to its extremities. Without wind—sometimes strong wind—trees would not mature well. He made the point: trials help to mature us so that we might finish well.

At age 30, I thought little of finishing the journey or the wind that would blow me around until my race ended. I just wanted to move to the next item on my agenda. Over three and a half decades have passed since that visit. Many winds have blown. The finish line is in sight instead of a faint concept in the distance. How do we finish the journey ahead?

The apostle Paul wrote from prison, “Brothers . . . one thing I do: forgetting what lies behind and straining forward to what lies ahead, I press on toward the goal for the prize of the upward call of God in Christ Jesus” (Phil. 3:13–14). Several years earlier, he told the Ephesian elders, “I do not account my life of any value nor as precious to myself, if only I may finish my course” (Acts 20:24). 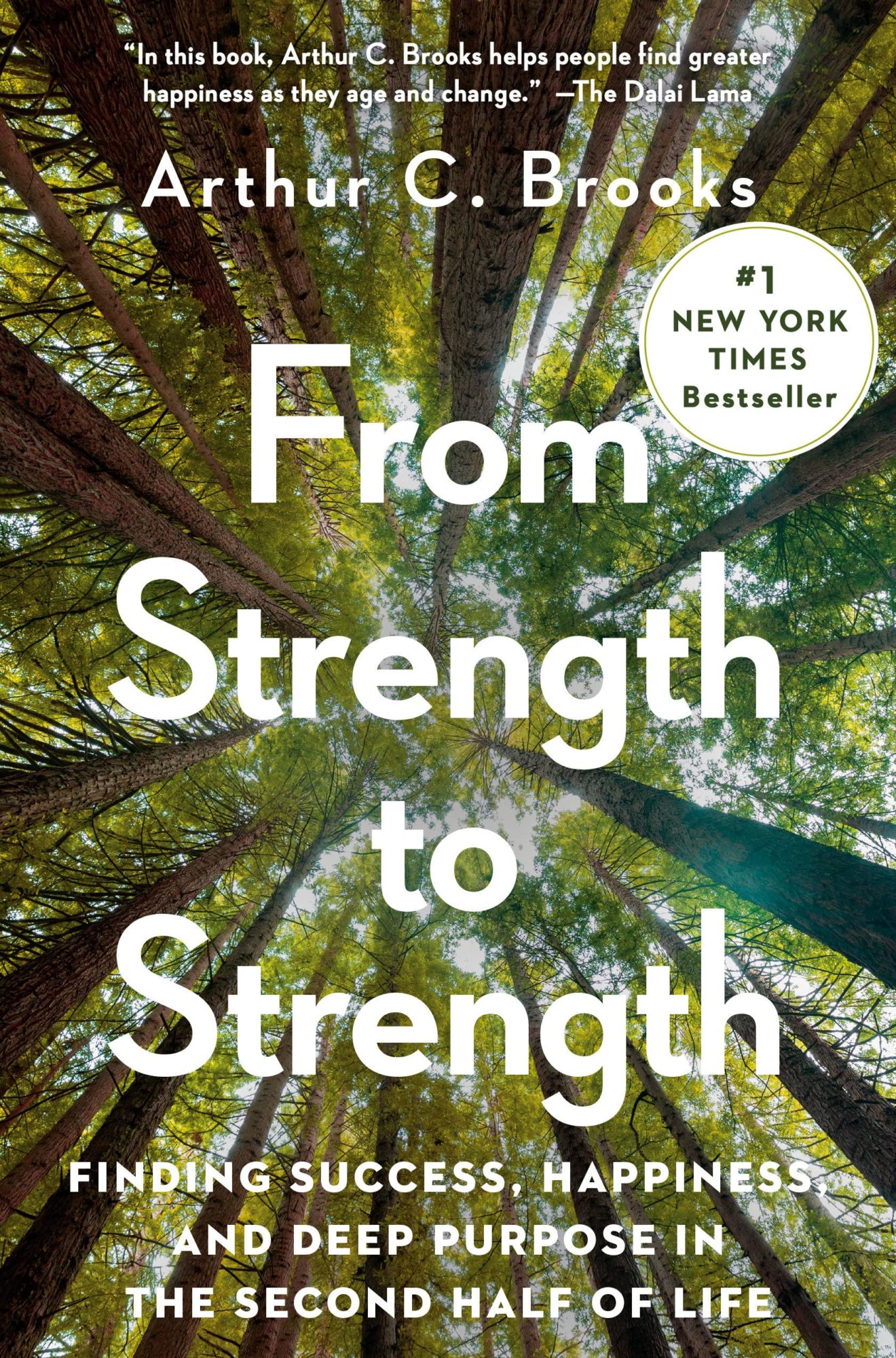 From Strength to Strength: Finding Success, Happiness, and Deep Purpose in the Second Half of Life

From Strength to Strength: Finding Success, Happiness, and Deep Purpose in the Second Half of Life

Many of us assume that the more successful we are, the less susceptible we become to the sense of professional and social irrelevance that often accompanies aging. But the truth is, the greater our achievements and our attachment to them, the more we notice our decline, and the more painful it is when it occurs. What can we do, starting now, to make our older years a time of happiness, purpose, and yes, success?

Drawing on social science, philosophy, biography, theology, and eastern wisdom, as well as dozens of interviews with everyday men and women, Arthur Brooks shows us that true life success is well within our reach. By refocusing on certain priorities and habits that anyone can learn, such as deep wisdom, detachment from empty rewards, connection and service to others, and spiritual progress, we can set ourselves up for increased happiness.

He contemplated these things years before he finished. The big picture of God’s purpose revealed in the gospel of Jesus charted his course (Acts 20:27). What he believed about God’s grand purpose he had just penned to the Romans: through Jesus Christ, God is conforming a vast multitude to the image of his Son in whom he will display the fruit of Jesus’s redemptive work forever (Rom. 8:28–32; 11:33–36). As Paul depended on gospel promises, he focused on God’s grand purpose to guide him in finishing well. When faced with difficulties that would cause most to veer off course, this focus kept his eye on completing the journey.

Second Half of Life

As Paul depended upon gospel promises, he focused on God’s grand purpose to guide him in finishing well.

Most people don’t share Paul’s life trajectory. That’s evident from the self-help book genre, as many address life’s journey from varied angles and endless perspectives. Popular author and social scholar Arthur Brooks identifies and emphasizes a stage of life that piques our interest: “the second half of life.” During a flight, he became intrigued by a conversation he overheard with a famous personality and his wife. The recognizable man expressed that he’d rather die than go on without accomplishments as he’d known in earlier years. He was despondent in his second half of life.

That conversation spurred Brooks, who saw himself tipping into the second half of life, to discover what would keep him from the same despair he’d just overheard. In From Strength to Strength: Finding Success, Happiness, and Deep Purpose in the Second Half of Life, Brooks poses a common problem. Successful people, whom he calls “strivers,” will likely peak in their careers between the ages of 30 and 50. Unless they adjust from the energetic creativity natural in youthfulness to new adaptations in the second half of life, they’ll live with a sense of failure and despondency.

To prove his thesis, Brooks peppers his book with anecdotes from successful people—from scientist Charles Darwin to Olympian Dominique Dawes. Most strivers achieve their best-known accomplishments in the first half of life. “Here is the reality,” he writes, “in practically every high-skill profession, decline sets in sometime between one’s late thirties and early fifties” (4). Tech founders have an even lower peak, by age 30 (7). The more one accomplishes in the first half of life, the more precipitous the decline in prestige and emotional capital in the latter half (19). The human psyche, he observes, isn’t “wired to enjoy achievement long past. . . . Satisfaction from success lasts but an instant” (21).

Stepping back to look at those who’ve lived in the spotlight, it’s easy to admire accomplishments and expect more of the same from them. Brooks insists that most will not only slide on accomplishments in the second half of life but will also lose happiness in past accomplishments unless they discover “a way to escape the [striver’s] curse.” Sounding almost theological, he talks about the good news of the secrets he found to enable strivers “to live a life of joy and purpose,” if they willingly shift life direction and work to achieve it (xiv). Like in all self-help books, Brooks believes that how you think and what you do make things happen.

What I found most intriguing was Brooks’s identification (citing psychologist Raymond Cattell) of two types of intelligence, one prominent in early life and the other in the second half of life. “Fluid intelligence,” more evident in your 30s and 40s, spurs innovation and discovery; most notable achievements happen in this period. “Crystallized intelligence,” essential to the second half of life, increases with age and is “the ability to use stock knowledge learned in the past” (27). Brooks explains, “When you are young, you have new smarts; when you are old, you have wisdom. When you are young, you can generate lots of facts; when you are old, you know what they mean and how to use them” (27).

To simplify 217 pages: If you’re going to be successful and find happiness with deep purpose in the second half of life, you’ve got to shift your focus onto application instead of innovation. Rather than bemoaning your lack of new achievements, work smarter with what you’ve already accomplished.

Sprinkling common sense with some Bible verses and sayings from Tibetan Buddhism, along with anecdotes and statistical data, Brooks provides his roadmap for living the second half of life. “Kick your success addiction,” he wisely instructs (43–63). Chip away at idols of money, power, pleasure, and honor, he rightly insists, borrowing from Aquinas’s model (70–75). He encourages us to ponder death, a practice that can snap us back to reality and focus, although he follows a Theravada Buddhist monk’s practice of imagining one’s own decaying corpse as the means to do so (104–108). Learn to value relationships above individualism, he stresses, with almost a New Testament ring to it (111–37). He even, like Paul in 2 Corinthians 11–12, finds value in acknowledging weaknesses (171–88). Yet, he is lacking.

Anyone reading this book will find helpful ideas. I certainly did, as one in the second half of life. There’s plenty to agree with as he assesses stages in life development and application. But you won’t discover how to finish well in the way Paul speaks of in the New Testament. For Christ-followers, the aim in the second half of life (and in the first too) is not success, happiness, and deep purpose, as wonderful as these may appear. Instead, we aim to finish the race of the Christian life, living each day to the glory of God in dependence upon Jesus Christ (Heb. 12:1–2). Brooks mentions nothing of this aim.

For Christ-followers, the aim in the second half of life (and in the first too) is to live each day to the glory of God in dependence upon Jesus Christ.

Paul wanted to finish his course. He knew suffering and trials awaited him along the journey (Acts 20:22–23), which don’t play well in the storyline of success and happiness. “A disciple is not above his teacher, nor a servant above his master,” Jesus reminds us (Matt. 10:24). Finishing well befits the life of someone following Jesus, “who for the joy that was set before him endured the cross, despising the shame, and is seated at the right hand of the throne of God” (Heb. 12:2). Because Jesus endured the cross on our behalf, might the same joy, amid whatever God purposes in trials and suffering, eclipse temporal success and happiness?

Finishing well, the Christian’s aim in this life, means being conformed to the image of Jesus our Lord—living life to the glory of God with whatever he ordains for our lives. While we can appreciate many of Brooks’s observations and recommendations, we dare not substitute them for living in God’s grand purpose.

Success, happiness, and deep purpose in the second half of life? Perhaps. Or perhaps not. Life in Christ offers something far better than what self-help material can deliver. Living in God’s purpose revealed in Jesus Christ is the life that will finish well.

Phil A. Newton (PhD, Southeastern Baptist Theological Seminary) serves as director of pastoral care and mentoring for the Pillar Network after pastoring for 44 years, the last 35 at South Woods Baptist Church in Memphis, Tennessee, which he planted in 1987. Phil and his wife, Karen, have five children and six grandchildren. He is the author of several books, including 40 Questions About Pastoral Ministry, The Mentoring Church: How Pastors and Congregations Cultivate Leaders, Conduct Gospel-Centered Funerals (with Brian Croft), Elders in the Life of the Church (with Matt Schmucker), Venture All for God: Piety in the Writings of John Bunyan (with Roger Duke and Drew Harris), and Shepherding the Pastor: Help for the Early Years of Ministry (forthcoming February 2023, with Rich Shadden). He is an adjunct professor at Southeastern Baptist Theological Seminary.