In The Soul of the World, prolific writer and philosopher Roger Scruton seeks to defend the sacred from the threat of a scientific reductionism that insists pure biological phenomena account for all of reality. Scruton wants to push back on the idea that we are hard-wired evolutionary beings who merely use the sacred (religion and aesthetics, primarily) to pass on the reproductive strategies of our genes (3). It’s common to think we’re merely machines with input/output modes rather than people interacting with one another. Such a perspective misses an integral part of human nature, however; namely, the “I-You” relation. We are centers of self-conscious reflection, responding to reason, beauty, truth, and so on (52). A computer may be able to replicate Botticelli’s The Birth of Venus, but it cannot interpret it. It can reveal what’s going on inside my brain when I’m looking at the painting, but it cannot reveal how I feel when I see the beautiful woman in it.

Scruton appropriates a “cognitive dualism” of sorts to show that the sciences can aptly describe humanity without reducing us to the merely physical. Science can indeed describe one aspect of a person, but it cannot encapsulate all of him or her (67). Humanity has a sense of “aboutness” they cannot escape; we think about the world, which entails thinking “beyond our mere genetic needs” (7). A smile is the action of one with a sense of “aboutness” distinct and separate from the mere physical explanation that may accompany it. A kiss shows that two wills are coming together. It is more than mere sensation; it is two souls fully exposed to one another (99).

Morevoer, music is not a thing to be understood, but something that possesses an intentionality of its own. Indeed, it can direct us toward certain praiseworthy moral qualities (173). This cannot be explained by means of scientific or evolutionary terms alone. Great works of music and art make a difference in our lives; they are remedies for our metaphysical loneliness (173). The I-You intentionality that is central to humanity goes far beyond the natural world, too, and thus humans cannot be reduced to the mere physical. Scruton believes that since this intentionality projects itself beyond the boundary of the natural world, it uncovers our religious need (175).

Throughout The Soul of the World Scruton wields his stylistic pen to demonstrate a right concern about reducing humanity to the mere physical. He convincingly shows that reductionist scientific theories explain away rather than build up humanity. I must admit being perplexed in places, however, not least of which in the final chapter. The end result of viewing humans as intentional agents is that we need religion, but the religion Scruton describes leaves the reader with strikingly little certainty. It is couched in a mysticism where God is absolutely beyond our ability to grasp or know (189). Further, Scruton admits that the afterlife is an absurdity. 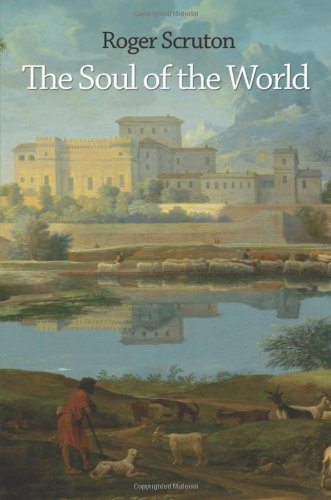 The Soul of the World

The Soul of the World

Scruton self-identifies as being a “skeptical Anglican” and seems at times to get close to how the Scriptures portray the truths of creation and humanity. Yet I think the force of his main point—the I-You relationship—would have landed with greater clarity had he embraced an I-You relationship that spanned creation, called it into being, and rescued sinners from the dominion of darkness. In other words, the “aboutness” by which we gain our humanity and dignity is finally grounded in the God who fashioned us in his image and revealed himself in Christ to be the one in whom we can place our certain hope—both in this life and in the next. While the next life is “beyond the veil of nature” (198), it isn’t beyond the one who made it. He created the world, entered his creation, and then walked, lived, died, and rose again. One day we will drink the “unseal’d source of thee,” but until then we walk by faith and not by sight. This is not mysticism; this is faith in Christ. We rest on a solid Rock who neither discounts our doubts nor lets them wander off into ambiguity. He knows, he understands, and we rest in his wisdom.

Much philosophical discourse today seems dry, boring, and overly technical. As a young philosopher, I share this concern. What seems lost to me is the ability to connect the marvel of the philosophical endeavor to regular people, not merely to academics. We need writers who can make the reader want to engage further, to see in the authors’ writings that what “came through them was longing,” as C. S. Lewis put it. We have understood it this way before. Plato declared in the Theaetetus that a sense of wonder is the mark of a philosopher. Likewise, Aristotle in his Metaphysics observed it is “owing to their wonder that men both now begin and at first began to philosophize.”

This sense of wonder is at the heart of philosophical investigation. We wonder, with Aristotle, that things “are as they are.” Scruton provides a sense of wonder in The Soul of the World. He is a well-trained and eloquent guide through murky waters. As one of my friends put it, he is a “fellow traveler” on the road of life, and one that captivates me unlike many other writers around. We need more of that in philosophy. We need more of that as Christians writing in the world of philosophy.

The Soul of the World is a wonderful, challenging, and perplexing work. The dust jacket reads that Scruton sought to “defend the experience of the sacred against today’s fashionable forms of atheism.” In the end, I think he provides enough of that for the reader to chew on, despite a few bones they’re going to need to spit out.

​Bryan Baise serves as assistant professor and program director of worldview and apologetics at Boyce College in Louisville, Kentucky. He is also a research fellow at the Ethics and Religious Liberty Commission (ERLC). Bryan is married with three children. You can follow him on Twitter.