Earlier this year, Hank Hanegraaff, the famous “Bible answer man” who has authored more than 20 books and hosted a nationally syndicated radio broadcast, converted to Eastern Orthodoxy. In his appreciative response, Rod Dreher—a fellow Orthodox Christian—cast Hanegraff’s decision in relation to the larger issue of evangelical thirst for historical depth: “Many evangelicals seek the early church; well here it is, in Orthodoxy.”

This isn’t the first time Protestants have been confronted with a relatively late-life, high-profile defection from their ranks. One thinks of G. K. Chesterton turning to Roman Catholicism in 1922; or Malcolm Muggeridge’s conversion to Catholicism in 1982, at age 79; or the reception of Jaroslav Pelikan (prominent church historian and longtime Lutheran) into the Eastern Orthodox Church in 1998 toward the end of his career.

Other stories illustrating this phenomenon could be multiplied. What are evangelicals to make of this move?

Kenneth Stewart’s new book, In Search of Ancient Roots: The Christian Past and the Evangelical Identity Crisis, explores this trend and offers historical perspective. For Stewart, professor of theological studies at Covenant College, the charge of historical shallowness in contemporary evangelicalism isn’t baseless. He acknowledges that the evangelical tradition can at times appear to be “the threadbare cousin of a nobler ‘Christianity of the ages’” (6), and he identifies several factors contributing to a current evangelical “identity crisis” (2–5).

In Search of Ancient Roots is a helpful resource that not only provides context for understanding evangelical departures, but also envisions the kind of robust, historically rooted Protestantism that may discourage them from happening in the first place. In what follows I will outline the book by drawing attention to one area where I thought its overall argument could be bit clearer, and then two particular strengths—areas where it surpasses other books of its kind.

In What Sense Are Evangelical Movements Perennial?

There are two essential theses in In Search of Ancient Roots: first, evangelical movements are perennial and recurring throughout church history; second, Protestant Christians can and should appropriate the past under the authoritative guidance of God’s Word. Part one of the book develops these theses, which then undergird his more specific material engagements in the ensuing three parts.

As one who couldn’t be more sympathetic to Stewart’s aims, I must say that I found the second thesis a bit easier to correlate with the larger aims of the book. This thesis—that evangelicals can and should appropriate the past—isn’t given a complete theological rationale, but it is impressively exemplified throughout the book. And the early chapters deal with important issues related to it—for instance, how the Word of God functioned authoritatively in the church even during the period of canonization (ch. 3).

The first thesis—that “both as to their length of existence and constancy of teaching, evangelical movements have always been present in the Christian tradition” (41)—may have benefited from a clearer definition of the word “evangelical.” Chapter one surveys three different ways of construing the history of evangelicalism, though it isn’t clear which if any of these is at work in chapter two, which sustains this thesis. 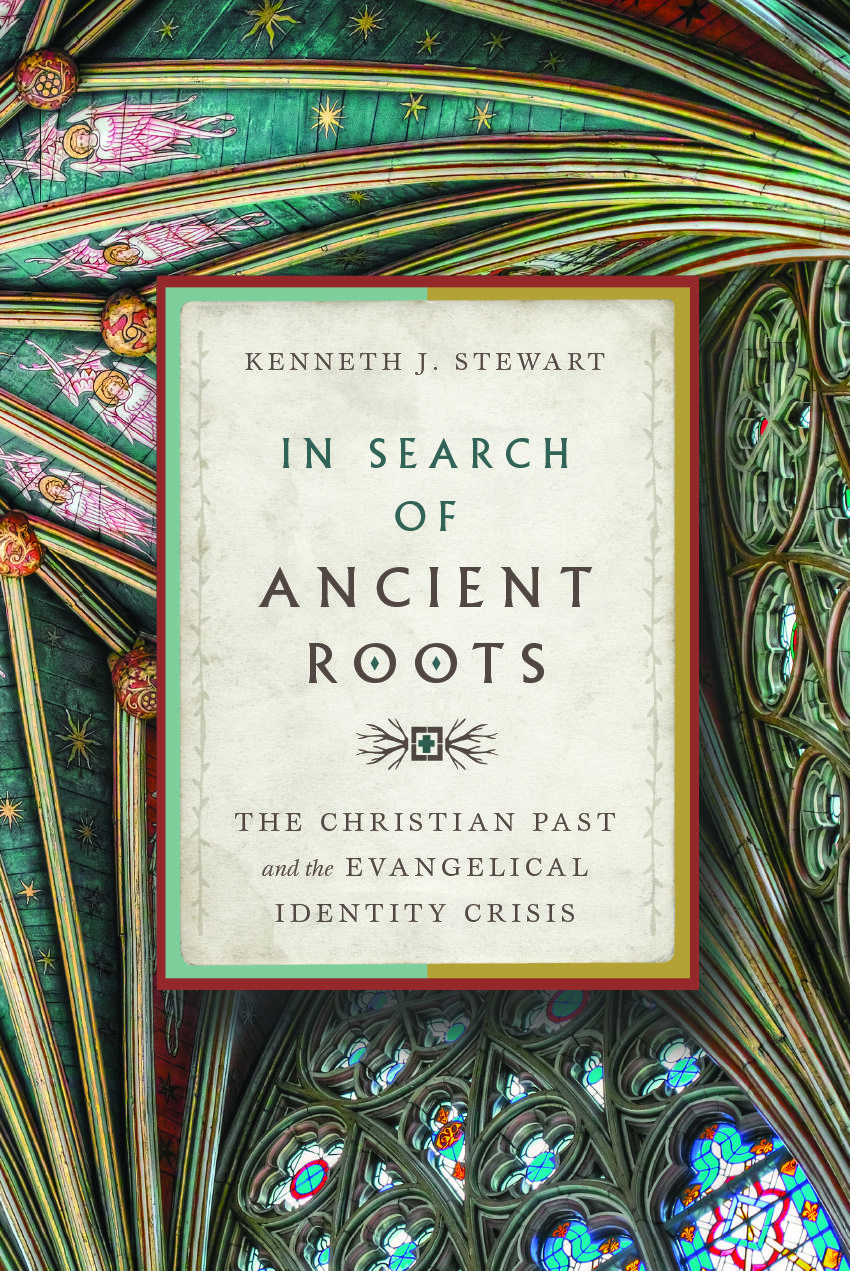 In Search of Ancient Roots: The Christian Past and the Evangelical Identity Crisis

In Search of Ancient Roots: The Christian Past and the Evangelical Identity Crisis

A common complaint about Protestant evangelicalism is its apparent disconnect from ancient Christianity. The result is that a number of younger Protestants in recent years have abandoned evangelicalism, turning instead to practices and traditions that appear more rooted in the early church.

In Search of Ancient Roots examines this phenomenon and places it within a wider historical context. Ken Stewart argues that the evangelical tradition in fact has a much healthier track record of interacting with Christian antiquity than it is usually given credit for. He shows that evangelicals need not view their tradition as impoverished or lacking deep roots in the tradition. Christian antiquity is the heritage of all orthodox Christians, and evangelicals have the resources in their history to claim their place at the ecumenical table.

Here Stewart draws on the Roman Catholic historian R. A. Knox’s 1950 book Enthusiasm, which linked the 2nd-century Montanists, 4th-century Donatists, 12th-century Waldensians, 17th–century Jansenists, and various Huguenots, Quakers, and Methodists under the label “enthusiast”—a pejorative term referring to a more charismatic kind of Christianity. Stewart finds this historical perspective “suggestive” (25) and “very germane” (27), particularly coming from a Catholic—but I wonder if his argument would’ve been stronger without it.

Even if we leave aside the inclusion of Montanism and Donatism, groups traditionally regarded as heretical, it’s not easy to know how to correlate these diverse groups in relation to evangelical Protestant identity specifically, since (for example) in this schema the magisterial Reformers are out, and the Jansenists are in.

Stewart draws attention to various names before Luther who emphasized biblical authority and the limits of papal power, including but not limited to John Wycliffe and John Hus (27–30). He surveys various Protestant efforts, from John Jewel (1522–1571) to more recent scholarship, to trace “precursors” to Protestant concerns before Luther (30–40). He concludes that “the evangelical tendency has always been active within the church” (40). However, as Stewart acknowledges, most of the “precursors” he surveys lived in the three centuries immediately prior to Luther (29). This doesn’t precisely prove the point that evangelical movements are perennial. In this regard, it’s noteworthy that when Pope Francis called the Waldensians “evangelical,” he also called them the oldest evangelical church.

An additional complicating factor, which Stewart also acknowledges, is that the majority of these “precursors” didn’t break from the church, and frequently held views different than those Protestants would come to adopt (30). So what exactly are the boundaries that demarcate what Stewart calls the “evangelical tendency”? If Peter Waldo is an evangelical, are Wycliffe and Hus? Can modern Catholics, such as J. R. R. Tolkien, be evangelical? To the extent that the term “evangelical” becomes decoupled from any denominational and institutional moorings, and functions as a more generic descriptor of certain qualities of Christian faith (Bible-centered, Christ-oriented, conversionist, and so on), the claim of evangelical longevity becomes less relevant to the challenge of departures from Protestantism today.

Perhaps Stewart’s emphasis on a recurring evangelical impulse throughout church history could be balanced with a corresponding emphasis on the element of loss and recovery involved in the Reformation. Calvin’s prefatory address to King Francis, for instance, not only famously appealed to historical precedents, but also acknowledged that Protestant doctrines had “laid long unknown and buried” before their 16th-century recovery (see my chapter here, as well as Fred Sanders’s recent piece). Nonetheless, Stewart’s argument helpfully draws attention to the complexity involved in these issues, and successfully combats the naïve assumption that Protestantism has no historical basis.

A distinguishing strength of Stewart’s work is its focus on how Protestants over the last 500 years have appropriated church history. The book makes a number of contributions in this area, particularly throughout part two where Stewart offers examples of Protestant engagement with earlier generations of church history.

Stewart evidences an encyclopedic knowledge of certain strands of the Protestant tradition, particularly in its Reformed stream. It’s evident he’s drawing on years of study conducted with an aim beyond one book project. Readers will learn, for instance, about James Ussher’s (1581–1656) scholarly engagement with the writings of Ignatius on the nature of episcopacy (95–98), and how Protestants have used patristic sources to argue for more frequent observance of the Lord’s Supper (ch. 7). A discussion of baptism is offhandedly supplemented with an anecdotal reference to a church merger in Geneva in 1849 that resulted in a dual practice (136); a point about evangelical neglect of the history of interpretation is supplemented by an extended case study of Stewart’s own longtime study of the selection of Matthias in Acts 1 (146–49).

Stewart’s ability to marshal historical particulars like this is an impressive feature of his book, and readers will benefit regardless of their response to the larger argument.

Another unique strength of In Search of Ancient Roots is the devastatingly sobering effect of its understatements. This is particularly evident throughout parts three and four, which address concerns related to the larger topic of the book—such as recent evangelical interest in monasticism, the legacy of John Henry Newman, the Apocrypha, the papacy in relation to church unity, and how a Protestant view of justification squares with church history.

In dealing with these topics, Stewart doesn’t chase down every line of argumentation that might be necessary for the full and clear establishment of a Protestant position (though, at times, that may be the effect produced on readers). Instead, he focuses on pushing back against the un-careful enthusiasm that often seems to characterize the argumentation of those reacting against an evangelical upbringing.

For instance, against those who are “ready to employ the words and example of John Henry Newman as a kind of ‘jawbone’ against evangelical Protestantism (204),” Stewart draws attention to the complexity of Newman’s legacy. Many who quote his now-famous aphorism “to be deep in history is to cease to be Protestant,” Stewart points out, are unaware that Newman wrote this while still Anglican, in the context of a larger book and argument that were controversial among Roman Catholic authorities (188).

A similarly cautionary effect is achieved in chapter 10, where Stewart outlines the history that lies behind the present differences on issues of canonicity among Protestant, Roman Catholic, Eastern Orthodox, and other Eastern traditions (Oriental Orthodox, Assyrian Church of the East, and so on.). Stewart doesn’t resolve every issue related to how the Apocrypha should be regarded today, but his argument has a powerfully dampening effect on the sensationalized zeal to “recover the missing books of the Bible” that we often see today. Chapter 11 draws attention to some of the more romanticized and idealistic underpinnings of some recent evangelical flirtations with monasticism, helpfully calling for more discernment and more mutual appreciation between evangelicalism and monasticism.

In chapter 13, Stewart address the claim that church unity depends on a central bishop of Rome. By approaching this topic from a historical route, Stewart again wisely prods current evangelical attitudes toward the pope into a larger context. A similar historical focus characterizes chapter 14, on the Protestant view of justification. Particularly intriguing in this chapter is Stewart’s recounting of a “justification by faith alone party” within the Roman Catholic Church in the deliberations leading up to the Council of Trent (237–42). This historical backdrop sheds light on more recent Catholic-Protestant consultation on the doctrine of justification, and rightly draws attention to those questions that remain unanswered or unaddressed at the present time.

Though In Search of Ancient Roots doesn’t resolve every issue involved in how evangelicalism is situated within church history, it offers an insightful, wise, and thoroughly detailed overview of Protestant identity. It raises compelling questions to those who too quickly assume Protestantism can’t be connected to the ancient faith, and it makes significant contributions to several areas of Protestant dialogue with other traditions. Those who read it will especially expand their knowledge of Protestant history.