It’s rare these days to find a church that doesn’t want to be “diverse.” Press most pastors, though, and you’ll find the diversity they’re after is more multi-color than multi-cultural. Their ideal is a bunch of people from different ethnicities gathering together to share in a church culture that’s still predominantly white. And in many contexts, this is a step worth celebrating. But this kind of diversity is—quite literally—only skin deep.

If we want to pursue diversity for the sake of the gospel, ethnicity matters. But diversity of culture matters even more. Enter Bryan Loritts’s new book: Right Color, Wrong Culture: The Type of Leader Your Organization Needs to Become Multiethnic.

Loritts, the African American lead pastor of a multicultural church in Memphis, argues that within every ethnicity we find three types of cultural expression—what he calls C1s, C2s, and C3s. C1s have assimilated from one ethnic group into another. In the black community, Loritts says, think Carlton Banks of Fresh Prince. On the other end of the spectrum are C3s, people so culturally inflexible that they refuse to adapt to other ethnic groups. Ice Cube is your model here. Between C1 and C3 is the ideal but elusive C2, that person who is culturally flexible enough to fit within his own ethnic group and someone else’s. For Loritts, the paragon of C2 is Denzel Washington.

So, Lorrits says, if you’re a gospel-loving Christian: be Denzel. Allow the influence of other cultures to shape you so that you overcome your cultural preferences and prejudices. C3s are born, but C2s are made when we prioritize our identity in Christ over our ethnic and cultural identity.

And if you are a church leader looking to move your church toward diversity: find Denzel. Diversity starts with the right kind of leadership. Carlton Banks won’t push your church toward other ethnicities, because he’s so comfortable with white culture that he has alienated himself from his fellow African Americans. Ice Cube may appeal to some in his own culture, but his cultural inflexibility will provoke only resistance by other culturally inflexible people (the white C3s!). In both cases, “Denzel” can lead us forward.

Loritts packages his leadership principles in a refreshing and surprising format, a “leadership fable.” Right Color, Wrong Culture: A Leadership Fable is a fictional story, told from the perspective of African American Peter Williams, a consultant called in to help Poplar Bible Church hire the right person in their diversification efforts. The book’s leadership principles aren’t given in bulleted lists, but emerge—sometimes dramatically—over the course of Peter’s story. 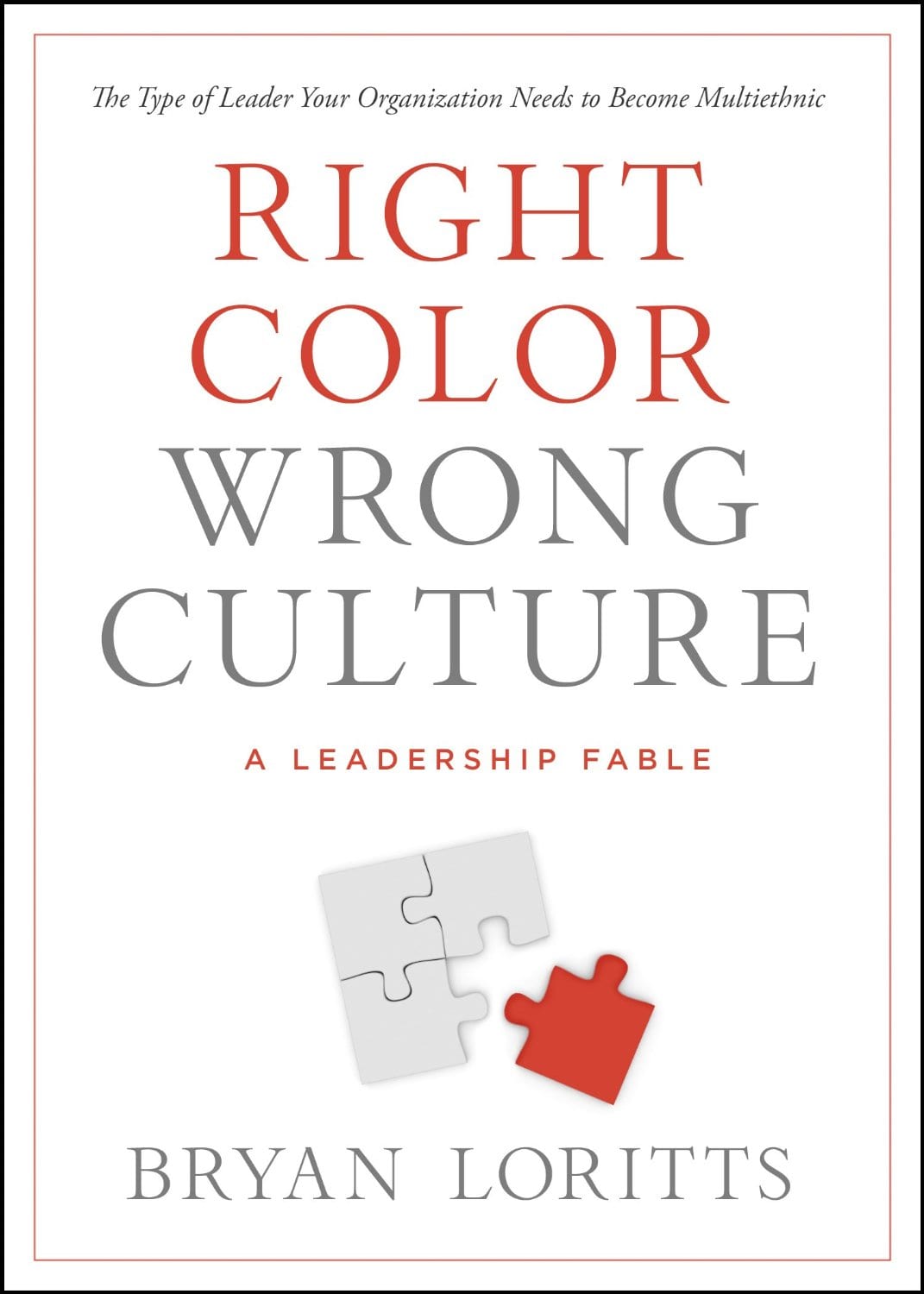 Loritts’s lilting storytelling, peppered with humorous asides and colorful dialogue, is just the spoonful of sugar needed to help us swallow some pretty strong medicine. Loritts doesn’t pull any punches, and readers both white and black will probably experience several moments of discomfort as they follow the story along.

For instance, to drive home the critical distinction between ethnicity and culture, Loritts has Peter confront several white characters with uncomfortable stereotypes of blacks:

What’s “black”? Yo, if I talk like dis, homie, is that black? Or if I use words like coalesce or genuflect, does that now mean I have to turn in my African American Express Card? Does that make me less black? What exactly is black? Is it fathering seven babies by seven different women, or is it having seven babies with one woman after you’ve married her and being a committed husband and loving father? What exactly is black?

Peter’s poignant questions force us to see the distinction between culture and ethnicity. “Black” can encompass C1s, C2s, and C3s (for that matter, so can “white”), but not every black person shares exactly the same culture.

This raises the more difficult question: how do two different cultures get along in one community? For example, when blacks and whites sit down in church together, how long should a sermon be? What is acceptable attire? What is the proper response to a good point—shouting amen or feverishly scribbling a note? Vance Pitman, pastor of one of the most diverse churches I (J. D.) have ever been to, says, “The sign of a multicultural church is that everyone, including me, feels uncomfortable at some point.”

One question we’d have liked to see Loritts explore more deeply is this: does a gospel-centered approach to cultural integration mean a gracious embrace of someone else’s cultural distinctions, or does it mean integrating parts of their culture into ours, thereby losing some of our distinctives? In other words, how tightly should we hold onto our cultural preferences, or should we allow them to blend into a new, “third” culture? Culture alteration does not seem to fit easily within the C1–C3 paradigm. Does “Denzel” switch between black culture and white culture, or does he also represent a third culture that is a blend of both black and white?

Consider an analogy. A truly multicultural congregation will be one in which those of different cultures rub off on one another. They are like ingredients in a beef stew—beef, carrots, onions, broth. While each ingredient (read: culture) is different, when combined together the various ingredients season each other. The result is something more than the sum of its parts. And—this is the critical point—while each ingredient retains its distinct taste, no part of the stew tastes exactly how it would on its own. Is that what Loritts intends by his C2 category?

Do we want the integration of cultures in a church to produce people of different ethnicities who are humble and generous enough to go along with someone else’s culture (without any real change in their own), or do we want it to produce something new—a blend of those cultures? We get the sense that Loritts wants his C2 category to go back and forth between these two realities, but he doesn’t ever quite spell that out. If a blended “beef stew” culture is in our future, how quickly should we push to get there? Perhaps some further elaboration is necessary to deal with the variety and fluidity of cultural change.

We raise these questions, however, within the context of deep appreciation and gratitude. Loritts has given the church balanced and biblically wise principles to pursue ethnic diversity. This book charts a beautifully new course for churches across the United States. Few books we’ve encountered deal with issues of culture, ethnicity, and the urgent call for American churches to pursue integration better than Loritts does in Right Color, Wrong Culture.

We believe this is a kairos moment for us as an American church to demonstrate to the world what true racial harmony looks like. If we are going to move the needle from the embarrassingly low statistic of only 3 percent of our churches being genuinely multiethnic, books like Right Color, Wrong Culture are going to be absolutely crucial.

Chris Pappalardo is a pastoral associate at The Summit Church and a PhD student at Southeastern Baptist Theological Seminary. He has the joy of being married to the love of his life, Jenn, and being the father of the eminently adorable Charlotte.