On the day we buried my mother’s husband, Deacon Lance presided over the graveside service. It was a hot May day, and Deacon Lance was dressed in khaki slacks and a blue button-down. His face beaded with sweat as he read to comfort those gathered: a wife, children, grandchildren, a friend of more than 60 years who needed assistance from his car to the folding chairs beside the casket.

Deacon Lance was deacon of the week at my mother’s Baptist church—on call, one might say, for such emergencies. There was no visible indication he minded taking a Tuesday morning off from work, no evidence of hurry or inconvenience. He wasn’t the only one to call my mother after her husband, whom she’d met at church after my father’s death, died. The phone rang almost constantly, and I was the one to answer it. It was the pastor. It was another deacon. It was a woman from the choir. It was the friend from Sunday school organizing the funeral luncheon. She planned for 75 people; I worried in advance about all the wasted food.

But church people lined up to mourn with the mourning—every table was full. 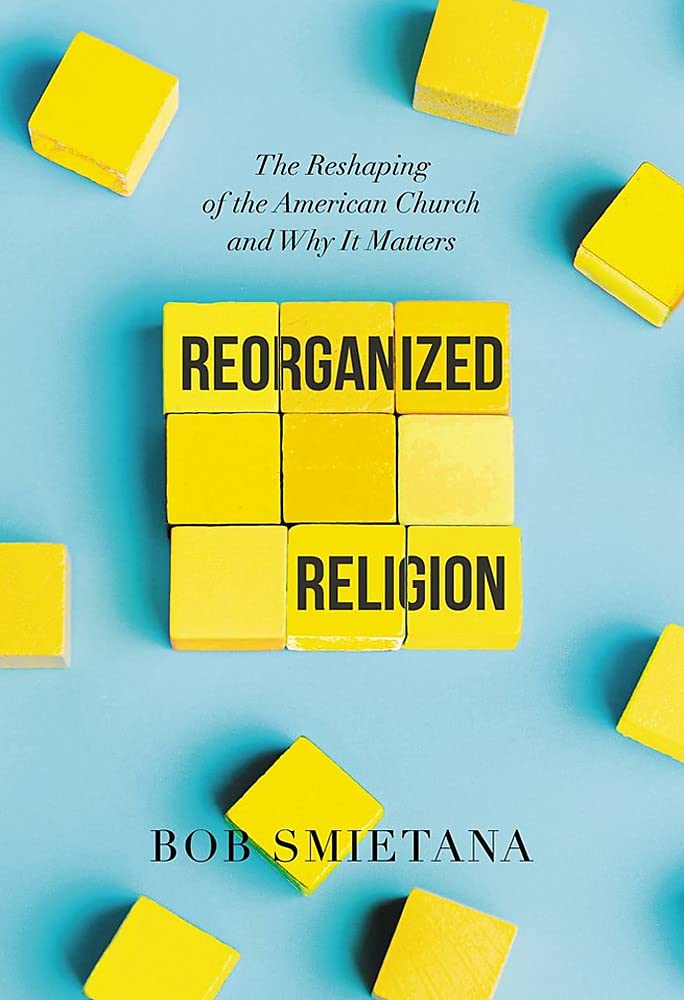 Reorganized Religion: The Reshaping of the American Church and Why it Matters

Reorganized Religion: The Reshaping of the American Church and Why it Matters

The United States is in the middle of an unprecedented spiritual, technological, demographic, political and social transformation— moving from an older, mostly white, mostly Protestant, religion-friendly society to a younger diverse, multiethnic, pluralistic culture, where no one faith group will have the advantage. At the same time, millions of Americans are abandoning organized religion altogether in favor of disorganized disbelief.

Reorganized Religion is an in-depth and critical look at why people are leaving American churches and what we lose as a society as it continues. But it also accepts the dismantling of what has come before and try to help readers reinvent the path forward. This book looks at the future of organized religion in America and outlines the options facing churches and other faith groups. Will they retreat? Will they become irrelevant? Or will they find a new path forward?

Written by veteran religion reporter Bob Smietana, Reorganized Religion is a journalistic look at the state of the American church and its future. It draws on polling data, interviews with experts, and reporting on how faith communities old and new are coping with the changing religious landscape, along with personal stories about how faith is lived in everyday life. It also profiles faith communities and leaders who are finding interesting ways to reimagine what church might look like in the future and discuss various ways we can reinvent this organization so it survives and thrives. The book also reflects the hope that perhaps people of faith can learn to become, if not friends with the larger culture, then at least better neighbors.

I love church. I especially love church at moments like I’ve just described. There’s nothing like the company of God’s people when storms roll in and skies hail grief. “How do people manage without the church?” I sometimes hear people say. They wonder how their “None” neighbors do without casseroles, phone calls, and women and men like Deacon Lance.

But admiration for American churches is a minority opinion today, and the central argument of religion reporter Bob Smietana’s new book Reorganized Religion: The Reshaping of the American Church and Why It Matters—that “organized religion is worth saving” (xviii)—is hardly self-evident.

As Smietana reports, especially in the last twenty years, fewer people attend church and religious affiliation is declining. (According to Gallup, we’ve reached the lowest rate of congregational membership since the 1930s.) For those who persist in the Sunday morning habit, political polarization, a global pandemic, racial reckoning, near-perpetual scandal, abusive leadership, and evolving social norms try their loyalties. What’s more, Americans aren’t simply losing faith in the church. They’re abandoning confidence in institutions. “Many faith groups are becoming increasingly aware that business as usual is no longer working,” Smietana writes (10).

Is there hope for American churches in the face of changing demographics and daunting pressures inside and outside the church? Smietana offers a promising yes, reminding readers of the belonging and purpose people find at church, institutional church: “Don’t be too eager to pronounce the church dead. God is still at work” (222).

What’s clear—from Smietana’s perspective—is that previous versions of church, especially “white” church, won’t serve what Pew Research calls the increasingly diverse and pluralistic “next America” (13). This isn’t to say most present-day expressions of church life are “bad.” “Asking if religion is good is like asking if music is good. Or food. Or politics. Or baseball or books or art or science or any other human endeavor. Religion is human. And it matters” (39). Helpfully, Smietana marshals an armload of evidence to defend the “good” that churches have contributed across history—efforts of care and compassion that couldn’t be duplicated by what one researcher calls “solitary spirituality” (53).

Some readers might wish for finer distinctions between religion and church and faith, but Smietana purposefully avoids theological or pastoral analysis of the breakdown he’s witnessing. “As a reporter,” he writes, “it’s not my job to take sides and to tell people where they should go to church, how they should practice their religion, or how their houses of worship should be organized” (105). In lieu of this, Smietana offers sociological and anecdotal evidence—the former, often familiar; the latter, often memorable.

I won’t easily forget one anecdotal story of a group of Myanmar refugees who revitalized a declining Episcopalian congregation in Tennessee. Although the diocese had been intent on closing All Saints Episcopal Church in Smyrna, these 70 Christians—members of the Karen ethnic group and former Anglicans in their home country—breathed new life into the previously whittled congregation of 20. The refugees proposed farming church land to help feed their families and raise money. “As the crops grew, so did the hopes of church members,” Smietana reports (209).

Many American churches will survive—but not without reimagining their place in their communities.

To Christians concerned to preserve historic Christian orthodoxy and orthopraxy, “change” can often be interpreted as “compromise.” Even if proposed changes avoid anything as consequential as the installation of Gene Robinson, the first gay Episcopal bishop (and the reason for All Saints’s initial decline in Smyrna, when congregants left the church in protest), sometimes we’re still resistant.

Many American churches will survive—but not without reimagining their place in their communities.

Nevertheless, Smietana’s story of the God-breathed creativity of Myanmar refugees suggests, at least to me, that the reimagining of American church life might helpfully be proposed by outsider voices. As American churches welcome minority and global perspectives, we might see beyond our partisanship, heal longstanding wounds, and regain our counterculture identity.

Hope isn’t lost—not for the communion of saints.

We are “home” again to care for our aging parents, even as my husband and I lament a loss of belonging. For 11 years, we remained “alien” as Canadian immigrants. We had no shared national story with our neighbors. We lacked many of the privileges of civic participation. Even when we opened our mouths to speak, people detected “stranger” in our voices. And yet, repatriation hasn’t re-homed us. At church, we’re fearful of saying things that appear politically charged and potentially divisive. In our neighborhood, we’re fearful our Christian commitments will be perceived as partisan. In many ways, we feel as alien in Ohio as we once did in Ontario.

“Outsiderdom” is hard—but it’s also essential to Christian identity. We’re strangers, resident aliens, pilgrims who desire a better country. A church, then, is meant to be an outpost of hope in a harsh landscape. It’s a hospital, welcoming the bruised and bedraggled and bandaging the weary.

Sometimes I think a church or other faith community is a bit like a gas station on a lonely country road. You can drive by for years and never notice it. Then one night, perhaps late, running out of gas or with something going wrong, you see the lights and pull in. It’s there when you need it because someone left the lights on and kept the doors open. (193)

Someone like Deacon Lance. I thank God for him and those like him, because I can’t do without church. God’s beautiful, broken church.