COVID-19 has rekindled a longstanding debate about the proper relationship of church and state: Do governments have the legitimate authority to order churches to stop meeting for public-health concerns? How, in other words, do we know whether we’re in a Romans 13 situation (called to obey the government) or an Acts 5 scenario (called to obey God rather than men)? When articulating answers to these questions, we’re engaging in “political theology”—that is, thinking theologically about the nature of politics.

Even apart from coronavirus, political theology has experienced a renaissance in public forums. From the last presidential election to the publication of The Benedict Option and beyond, everyone wants to talk about Christian political engagement. So if you haven’t yet heard about David VanDrunen’s latest work, you soon will. According to some of its earliest reviewers, Politics After Christendom: Political Theology in a Fractured World is set to dominate the field of political theology for years to come. Much like The Benedict Option (with which VanDrunen engages), Politics After Christendom is bound to make waves. 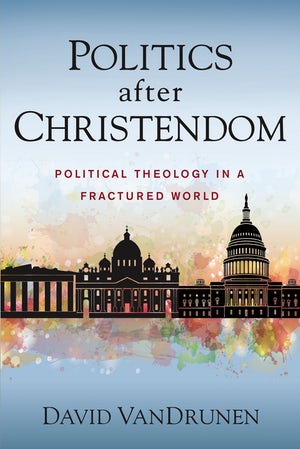 Politics After Christendom: Political Theology in a Fractured World

Politics After Christendom: Political Theology in a Fractured World

Politics After Christendom argues that Scripture leaves Christians well-equipped for living in a world such as this. Scripture gives no indication that Christians should strive to establish some version of Christendom. Instead, it prepares them to live in societies that are indifferent or hostile to Christianity, societies in which believers must live faithful lives as sojourners and exiles. Politics After Christendom explains what Scripture teaches about political community and about Christians’ responsibilities within their own communities.

Appreciation for the Book

VanDrunen—professor of systematic theology and Christian ethics at Westminster Seminary California—is a model of charity, clarity, and extensive engagement. The cast of figures he gives stage time in the book is impressive: not just heavyweights of the Reformed tradition (e.g., Augustine, Calvin, Francis Turretin, Abraham Kuyper) but also some of its most forceful contemporary opponents (e.g., N. T. Wright, Stanley Hauerwas, James Cone). Politics After Christendom is worth buying for the footnotes alone.

Even VanDrunen’s most trenchant critics will find much to appreciate in the book. Chapter 5’s (“Natural Law and Political Community”) modest account of natural law—as something discerned slowly across time through the cultivation of wisdom—is a welcome reprieve to the overconfident assertions from some corners about all that can be known by natural law.

Chapter 10’s (“Custom and Laws”) discussion of polycentrism is a helpful challenge to the idolatrous tendency in modern political theory to attribute absolute sovereignty to the government, whether it be invested in the people, the laws, the rulers, or the system. Whether or not readers identify with two-kingdoms theology (or, like me, remain unpersuaded by VanDrunen’s thesis), they stand to gain much from sections like these.

VanDrunen’s central argument is that government is a legitimate-but-provisional institution tasked with the preservation of society amid the fall. The government’s task is limited to carrying out justice, preventing acts of violence (e.g., murder, rape, and theft), and securing the stability necessary for the flourishing of earthly institutions like families and markets. The church, on the other hand, has been uniquely appointed to manifest God’s redemptive rule and anticipate how things will be in God’s eternal kingdom.

VanDrunen distills these principles from his reading of the Noahic covenant. For VanDrunen, this covenant is the foundation of political theology, containing the hermeneutical key for government’s proper role and boundary. The principal resources a Christian might need to understand the nature of government are present, if underdeveloped, in God’s covenant with Noah. For VanDrunen, the later disclosure of Mosaic law, the Sermon on the Mount, and the vision of new creation tells us nothing about what political society should look like in the here and now (125).

For VanDrunen, the Noahic covenant is the foundation of political theology, containing the hermeneutical key for government’s proper role and boundary.

While the Noahic covenant has long been considered a preliminary word about government authority, it hasn’t—until quite recently—been read as something like a “regulative principle” of politics, constraining the legitimate activities that government can engage in to Genesis 9. VanDrunen defends this move by demonstrating the different standards by which God judges his own people and the nation:

When prophets condemned Israel throughout the Old Testament, idolatry was of chief concern. Yet this issue drops almost completely out of sight when the prophets turn to the gentile nations. . . . God held them accountable for egregious acts of injustice and hubris, but he did not pronounce judgment for their idolatry. (98)

And here VanDrunen is right. God’s people are held to a higher standard; judgment begins in the house of God (1 Pet. 4:17). It would be wrong for civil government to, say, punish people for worshiping the wrong gods, which is what litigating the first commandment would require.

Is the Noahic Covenant a Sufficient Framework?

But where VanDrunen goes a bridge too far is in claiming that “the Noahic covenant alone explains the divinely authorized formation and legitimacy of common political communities” (101). For even while God holds his people to a higher standard than the unbelieving nations, we still find God holding those other nations accountable to an expanding, unfolding vision of biblical justice.

Still, VanDrunen’s interpretation of the covenant upholds many key ideas of the Christian tradition regarding politics: the limitation and provisionality of governmental authority, the distinctive purposes of the church and the state, the penultimate goods shared in common by believers and non-believers, the importance of religious freedom, and more.

Good government should, at the very least, uphold these principles. But by using the Noahic covenant as a kind of regulative principle, VanDrunen undermines the legitimacy of several elements essential to good governance. His modest political vision, in excluding anything beyond the protection of life, can’t properly account for the kinds of full-orbed good governments that Christians have historically recognized.

VanDrunen’s modest political vision, in excluding anything beyond the protection of life, can’t properly account for the kinds of full-orbed good governments that Christians have historically recognized.

VanDrunen believes the government’s explicit commission is limited to “the defense of justice only in terms of intrahuman violence” (217). Under his Noahic framework, we’re left uncertain as to whether government has any legitimate authority to ban things like “prostitution, gambling, narcotics, and the like” (339). Indeed, when the matter of prohibiting access to heroin comes up, VanDrunen demurs that the state “arguably” has such legitimate authority, but only on protectionist grounds (347). Any framework that stutters in speaking of legitimate government authority here should give us pause. Without expecting anyone to become an immaculate saint, shouldn’t a Romans 13 government strive to make vice difficult and virtue easy (cf. 1 Pet. 2:14)?

While VanDrunen strongly affirms the government’s duty to protect the poor from violence (including theft), his Noahic framework casts doubts on the legitimacy of government involvement in charity or welfare for the poor (354). According to VanDrunen, such activities stand on “the outskirts of legitimate state authority” (354). Depending on their sensibilities, some may sympathize with VanDrunen here. The Christian tradition, however, has maintained quite the opposite: a government that doesn’t provide for the poor is illegitimate.

For Old Testament Israel, justice went beyond protection; it meant a prohibition against usury, limitations on debt, injunctions to care for foreigners in the land (a type of poor), and providing for basic needs by leaving gleanings for the foreigner and the needy (Lev. 23:22). The Mosaic law may not carry weight for us in its specifics but—as one American Puritan phrased it—where it reflects the natural law, its principles “do still morally bind all nations.” Thomas Aquinas affirmed these principles in his claim that property rights can be trumped by the need of the poor. John Calvin, in turn, praised magistrates for their relief of the poor through housing, schools, and hospitals.

When these modest options are deemed to operate on the border lands of legitimate government authority, one is left wondering if there’s something missing in VanDrunen’s Noahic “justice.” Would such a system accuse Jean Valjean in Les Miserables for taking a loaf of bread to feed his family?

Politics After Christendom is a fresh and provocative biblical foundation for political theology. Convinced or unconvinced, readers will come away with a broad sense of the field of political theology and a stimulating partner for thought in VanDrunen.

I only hope that, in the end, we will have something more to say about politics and political theology than the Noahic covenant alone would allow. A full-orbed account of good government demands it.

John Shelton is an economic policy advisor in the United States Senate and writes on theology, ethics, and politics for various publications. An alumnus of Duke University (MDiv) and the University of Virginia (BA), he has presented at national conferences such as the American Academy of Religion and the Society of Biblical Literature. He lives in Washington, D.C., with his wife, Katelyn.