I speak with multiple pastors during any given week. Nearly all of them are theologically conservative evangelicals of the sort that would resonate with most of the articles published on The Gospel Coalition. Many of these conversations relate in some way to the pressures, frustrations, and even fears related to pastoral ministry. A perennial topic of conversation is the influence of politics on the church.

I know pastors who have been forced out of their churches because they weren’t openly supportive of a candidate or issue that was popular with the congregation’s lay leaders. I know others who are afraid of discussing various issues because their congregations are too divided and the pastors fear being too vocal could lead to controversy.

A constant refrain I hear from pastors is that their church members are being influenced by provocative cable news personalities, conspiratorial social media, and sensationalist websites. Many of my pastor friends are concerned American Christians are simply too political.

Biblical scholar Patrick Schreiner would disagree with this assessment—sort of. In his new book Political Gospel: Public Witness in a Politically Crazy World (B&H, 2022), Schreiner argues that Christianity is, by definition, political. The gospel is a political announcement. Religion and politics not only shouldn’t be seen as separate spheres—they actually overlap completely. Believers don’t need to be less political. Rather, they need to be discipled so they’re appropriately political. 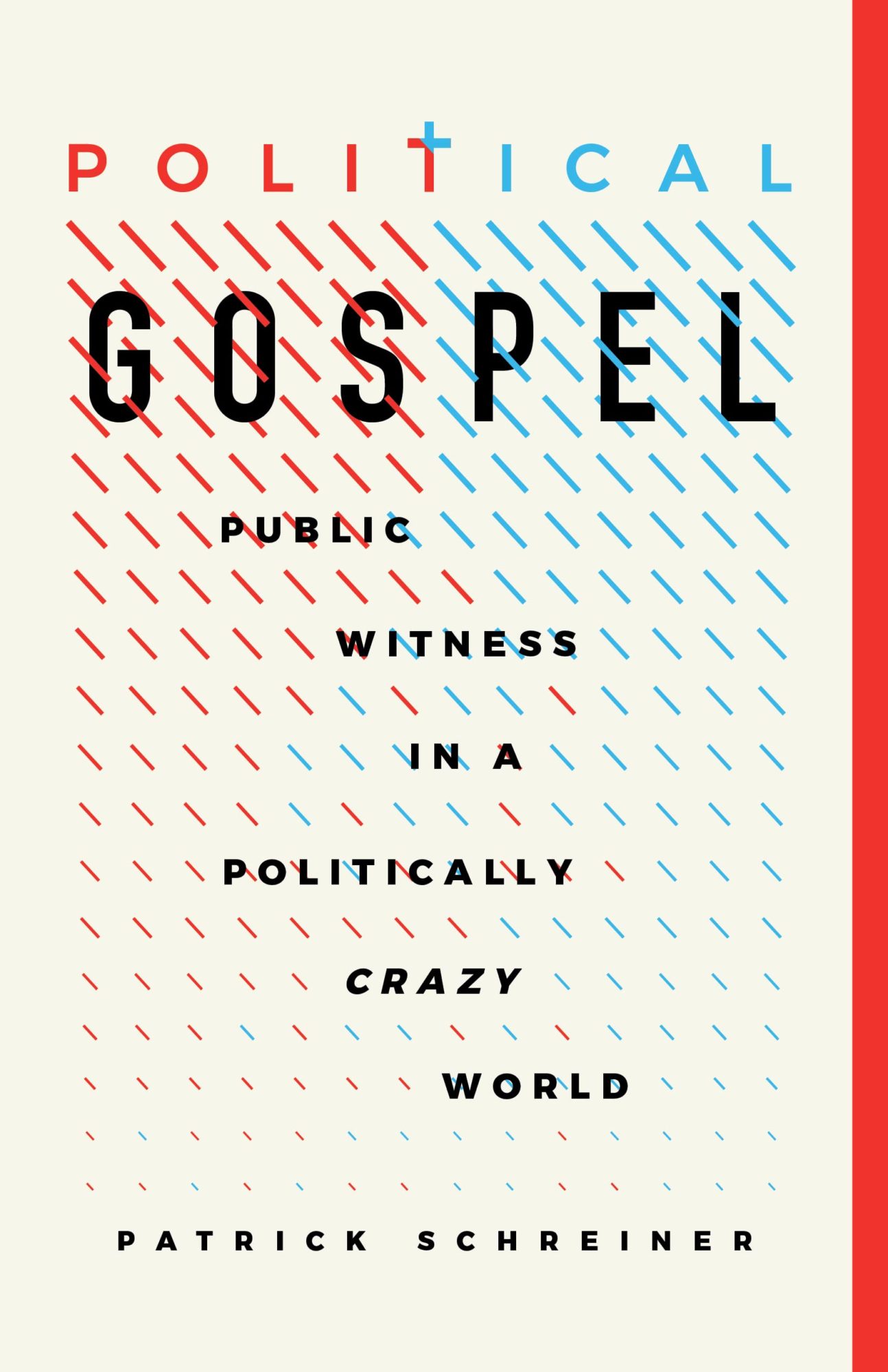 In a supercharged political climate, Political Gospel explores what it means for Christians to have a biblical public witness by looking to Scripture, the early church, and today. Should we submit to governing authorities or subvert them? Are we to view them as agents of the dark forces or entities that promote order? In these pages, we’ll see that Christians live in a paradox, and we’ll see how to follow Christ our King right into the political craziness of our day.

Schreiner, who teaches New Testament at Midwestern Baptist Theological Seminary, offers a framework for political discipleship that’s rooted in biblical theology. Schreiner isn’t interested in making a case that believers should be more partisan. In fact, he warns repeatedly about the dangers of being overly invested in the fortunes of candidates, parties, and platforms. Rather, he draws on a more classical understanding of politics as the ordering of public life.

Christianity is in this sense a politic. Jesus is Lord, not just of individual believers but of all creation. Christianity isn’t merely a matter of personal spirituality, but it’s also public truth. According to Schreiner, “Christian politics concerns how we integrate our confession that Jesus is Lord with our call to love our neighbors” (6).

Believers don’t need to be less political. Rather, they need to be discipled so they’re appropriately political.

Schreiner emphasizes the paradoxical nature of political discipleship. He also argues that many familiar biblical passages in the Gospels, when understood in their historical or canonical contexts, are deeply political. The Gospels indicate Jesus is a King who proclaimed a kingdom that offered a challenge to fallen earthly powers. His kingdom has already been inaugurated, but it hasn’t yet been fully consummated.

He notes the gospel “includes subversive language against the corrupt and unethical ruling elite” (31). Yet Jesus and the apostles also made clear that the kingdom isn’t ushered in by force but rather is embodied in an ethic of love for neighbor, submission to earthly rulers, and sacrifice for the good of others. Because of this paradoxical relationship between subversion and submission, “Jesus’s claims were political, but they were political in a way people could hardly imagine” (42).

The two ways are further evidenced in the earliest churches of the New Testament era. The Roman authorities saw Paul as a political threat, much as they had Jesus before him. Paul drew upon explicitly political language to refer to the church as a countercultural assembly. Both baptism and the Lord’s Supper were political symbols that subverted political assumptions. Yet Paul was not a political revolutionary but rather a dual citizen of both heavenly and earthly kingdoms. He obeyed Roman law, recognized the empire as a God-ordained authority, and commanded obedience to and prayer for earthly rulers.

For his part, Peter agreed with Paul but gave greater emphasis to the idea that Christians are exiles. The sacraments were more inclusive than the Roman ceremonies they resembled. Though they’re “rites of resistance,” resistance takes the form of “overturning social norms and welcoming all who will believe” (122). As with the Gospels, the political theology of Paul’s epistles is subversion through submission.

Schreiner also looks at the end of political discipleship by showing how the two ways are presented in apocalyptic New Testament texts. The city of man and the city of God coexist, but always in tension and sometimes in open conflict. King Jesus will return to fully consummate his kingdom, which will subdue all earthly kingdoms in a fully redeemed earth.

Yet this coming kingdom is not to be implemented by worldly force. The kingdom spreads through witness (including martyrdom) and waiting as believers proclaim the gospel and live out its implications. Schreiner calls this the “politic of persuasion” (169; cf. 45). At the end of the age, subversion and submission are fully realized when the sacrificial Lamb returns as the victorious Lion.

While much of Schreiner’s book is devoted to biblical-theological reflections, at various intervals he stops to apply the two ways of subversion and submission to contemporary Christians, primarily in the U.S.

He urges believers to avoid the opposite dangers of religious nationalism and what he calls “nonconformity” (60), by which he means disengagement or quietism. God ordains earthly kingdoms, but they’re not ultimate and they’re subject to reformation. As dual citizens, we eschew the temptation to disengage from the public square or seek to Christianize earthly nations through secular political means. As a Baptist, Schreiner rejects the concept of Christian nations in principle, suggesting they confuse the differing but complementary roles of church and state. The upshot is that Christians aren’t to be anti-government or pro-government, but what Schreiner calls “alter-government” (77).

At the end of the age, subversion and submission are fully realized when the sacrificial Lamb returns as the victorious Lion.

Schreiner also emphasizes the importance of “ordered allegiances,” noting that “there is something Christians must yield to Caesar, but they must not yield what has previously been demanded by their Creator” (135). Following Richard Mouw, Schreiner commends a “mindful activism” (142) that allows for peaceful civil disobedience when governments neglect their responsibilities to promote authentic justice and human flourishing.

He emphasizes the importance of maintaining a clear witness on issues where Scripture is clear, yet he also cautions against using Scripture to make definitive pronouncements about debatable strategies and policy matters. He surveys how several biblical characters approached the public square, holding up Jeremiah as the ideal role model for a “political prophet” (194) who faithfully balanced calling God’s people to repentance, holding rulers accountable, promoting human flourishing, and reminding all people that God’s kingdom demands our ultimate loyalty.

While Political Gospel is well researched, Schreiner writes for nonspecialists. He includes numerous charts that will be especially useful for pastors or professors who want to teach on this material. The book is also replete with contemporary anecdotes about the various ways Christians navigate political debates. The discussions of topics such as Donald Trump, the COVID-19 pandemic, the January 6 uprising, and the racial riots following George Floyd’s death may date the book within a few years, but right now those issues remain painfully fresh, especially for American believers.

While readers of all sorts will benefit from Schreiner’s work, Baptists will likely appreciate many of his arguments more than those from other ecclesial traditions. He affirms the separation of church and state, a regenerate church membership, and believer’s baptism, tying all these principles to his biblical political theology. He rejects Christian nationalism but not Christ-centered political engagement. He affirms laws informed by biblical principles but also rejects theonomy. In many ways, Schreiner offers a biblical-theological complement to fellow Baptist Jonathan Leeman’s How Do the Nations Rage? (Nelson, 2018), though Leeman’s work is stronger on the relationship between political theology and ecclesiology.

Political Gospel reminds us that politics is more than partisanship and the gospel is more than a message of individual salvation. Christianity offers a politic, rooted in the cross, where Jesus submitted to the consequences of human sin for the sake of subverting the dire effects of the fall. While Schreiner mostly shies away from policy suggestions—those are perhaps better left to the ethicists—he provides a helpful framework for considering matters of policy.

Pastors especially will find Schreiner’s work to be a helpful resource for forming faithful political disciples who embrace the biblical paradox of subversion through submission, thus the many political temptations of our hyper-polarized age.