Pastors might disagree on their least favorite aspect of ministry. One complains about scheduling meetings; another loathes administrative details. But all agree on one thing: the criticism endemic to pastoral ministry. Being “the target of verbal flak,” Joel Beeke and Nick Thompson write, goes with ministry territory; it’s part and parcel to the verbal, personal, and public way we serve (56).

Beeke (prolific author, pastor, and seminary president) and Thompson (his student preparing for ministry ordination at Puritan Reformed Theological Seminary) serve pastors, churches, and the Christian community with their book, Pastors and Their Critics: A Guide to Coping with Criticism. While considering pastors, the authors offer any believer counsel and practices for seeing criticism as an instrument of sanctification. 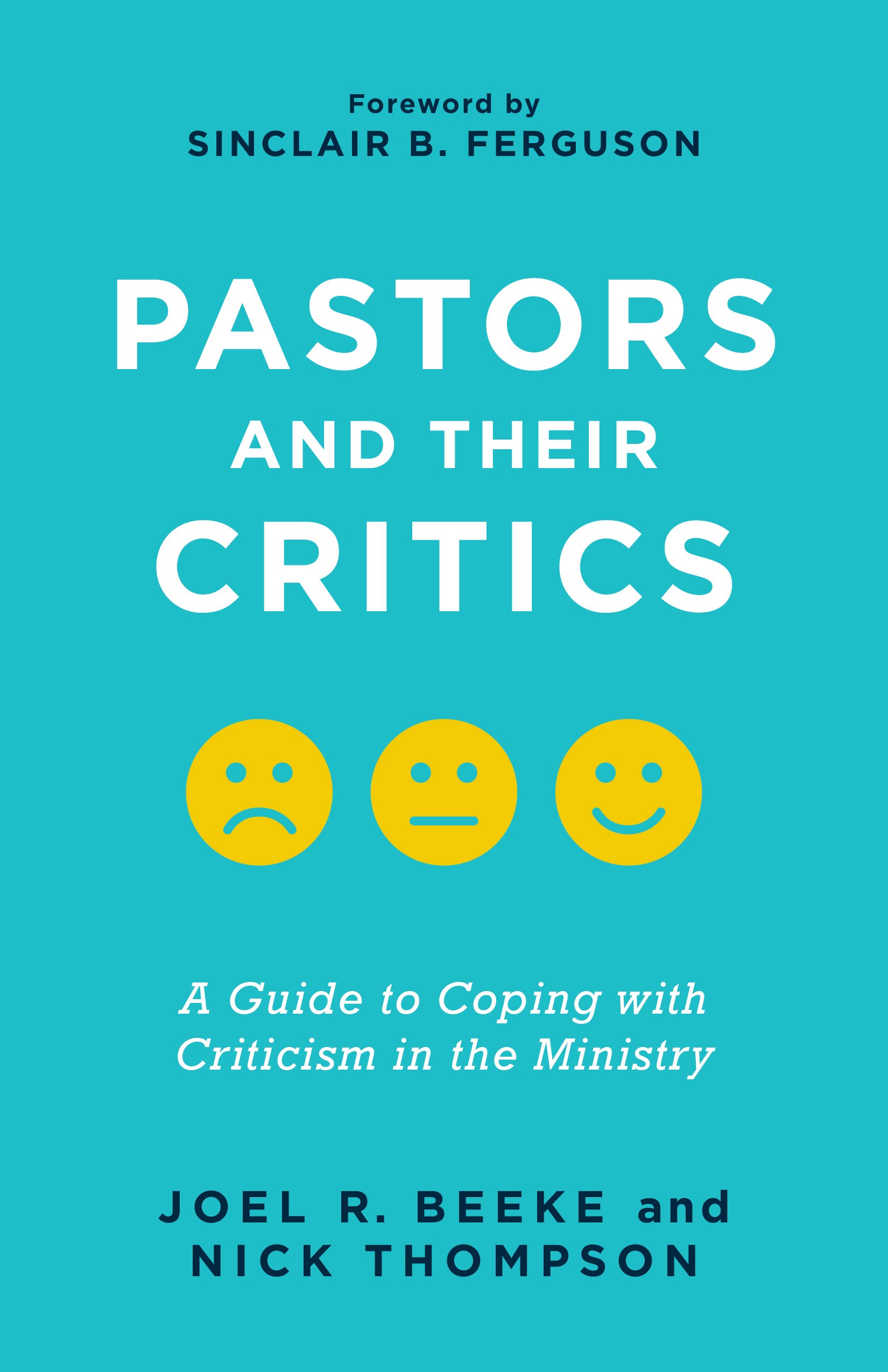 Pastors and Their Critics: A Guide to Coping with Criticism in the Ministry

Pastors and Their Critics: A Guide to Coping with Criticism in the Ministry

Every pastor knows what it’s like to be criticized. But how does he respond? And how does he offer constructive criticism of his own?

With wisdom, charity, and a wealth of personal illustrations, Joel Beeke and Nick Thompson answer these questions and more. The Bible is full of critics, and it gives us practical principles for responding to criticism, offering criticism, and creating a healthy church culture. As Beeke and Thompson unfold a theological vision for coping with criticism in the gospel ministry, you will be strengthened, encouraged, and equipped.

Deserved or not, criticism stings. In the garden, Satan’s criticism aimed at the Creator and attacked his generosity and integrity. With humanity’s fall, destructive criticism dogs the steps of the entire race (20–22). Consequently, the Bible is replete with characters facing criticism—from Moses to David to Jesus to Paul. Beeke and Thompson demonstrate how these personalities faced criticism, particularly the way Jesus Christ handled it. In doing so, they spur us toward humility, loving critics, and appropriate responses.

After establishing a biblical foundation, the authors work through four principles for coping with criticism: receive it realistically, humbly, with sober judgment, and with grace. An aggressive reaction, especially when the criticism is unfounded, often seems justified due to the hurt inflicted. Yet with carefully developed questions, the authors dislodge the hidden motives, desire for vengeance, and self-protecting idolatry that criticism exposes (79–80). Even if it lacks appropriate grace, criticism can be an instrument to remove practices and attitudes unbecoming of Christ’s followers. Yet only when we understand criticism as the Lord’s sanctifying tool will we learn lessons our critics didn’t intend.

Only when we understand criticism as the Lord’s sanctifying tool will we learn lessons our critics didn’t intend.

Some of the best changes in my preaching came as a result of barbed criticism. I bristled, immediately marshaling an array of reasons why it was unfounded. After reflective questions, though, I was able to separate the husks from the kernels to improve and strengthen my preaching.

It’s hard to accept the need for criticism. But what if no one ever criticized us? Oh, that would be joy for me, we think. Yet, Beeke and Thompson counter: “Would we be growing in humility, in sanctification, in Christlikeness, or would we be growing in pride, in self-sufficiency, and in self-righteousness?” Criticism exposes flaws in life and ministry we might otherwise gloss over (61).

Early in ministry when facing harsh, mostly unwarranted criticism from a few members, I retreated to a cabin for a couple of days to work through my angst. Heaven seemed like brass as anger toward my critics seethed. Finally, a breakthrough came when I realized they were God’s instruments to reveal my pride and bitterness. I needed the criticism—not so much the content but the divine work intended through it.

What About the Critic?

While criticism might arise due to our faithfulness, not due to sin, the authors help us assess critics. They ask, “What is the spiritual condition and character of my critic?” “Is your critic a believer or an unbeliever?” If from within the church, “is it from a member who is actively involved in the church’s ministry or a member on the sidelines?” (62–63). None of these questions implies dismissing criticisms. Again, they may be partially right even if lacking good motives. Yet pastors must consider how to shepherd critics with grace instead of pounding with a verbal (or social-media) club. Destructive criticism sometimes offers a better barometer of the critic than the one critiqued (66–67). Consequently, we must learn to respond with humility, lest we react rashly and lose opportunity to minister to those whose criticisms reveal spiritual neediness (77).

I needed the criticism—not so much the content but the divine work intended through it.

How might we face critics with grace? Be prayerful, be patient, and be prudent (86–99). “Prayer is one half of our ministry and it gives to the other half all its power and success,” Charles Bridges wrote in The Christian Ministry. But is prayer our first response to criticism? It should be, for prayer is “the bowing of the soul in willing submission to God” (88). Patience calls for a 24-hour waiting period before responding to critics, allowing the heart and mind to think soberly. Prudence distinguishes when to respond and when to be silent. We wrap these responses in dependence on Christ’s grace.

Can Criticism Be Constructive?

The authors recommend developing a church atmosphere where useful criticism can be exercised. This requires ethos (faithful character of the critic), pathos (wrapping critiques in affirmation), and logos (choosing the right words to build up, not destroy) (122–23). Emphasizing the corporate and communal nature of the church avoids heavy-handed criticism on the one hand, and aversion to criticism on the other (146). Instead of living under the idol of perfectionism, the church’s unity and love deepens by humble, gracious, and loving critiques from both pulpit and pew.

Patience calls for a 24-hour waiting period before responding to critics, allowing the heart and mind to think soberly. Prudence distinguishes when to respond and when to be silent before critics.

Developing healthy criticism in the body won’t happen quickly. It matures as we learn to live humbly with one another, worshiping and serving side by side, while recognizing the need for fellow believers to hone the rough edges in our spiritual walks. Paul had this in mind when, after a string of exhortations on the Spirit-controlled life, he adds: “submitting to one another out of reverence for Christ” (Eph. 5:21). Healthy criticism flows out of mutual submission in the church. It crushes native pride and receives admonitions “out of reverence for Christ.”

What better time to learn this practice than the present? This year has exposed areas of personal indiscipline, relational fractures, congregational neglect, poor habits, and social maladjustments. We’ve proven we need the gathered body more than ever before to speak into our lives with correction, admonition, loving criticism, and affirmation. Might that be a healing balm far more important than the latest vaccine or immunotherapy?

Healthy criticism—whether through a sermon or simply through members in conversation—frees pastors and congregations from making the church’s ministry about themselves. As constructive criticism deepens sanctification through members caring for one another, the church grows inwardly and outwardly. What Satan meant for evil in the garden, the fruit of gospel-transformed lives turns it for good. Pastors and Their Critics reinforces how the Lord works all things together for our good.

Phil A. Newton (PhD, Southeastern Baptist Theological Seminary) planted and has served as senior pastor of South Woods Baptist Church in Memphis, Tennessee, since 1987. Phil and his wife, Karen, have five children and six grandchildren. He is the author of several books, including 40 Questions About Pastoral Ministry, The Mentoring Church: How Pastors and Congregations Cultivate Leaders, Conduct Gospel-Centered Funerals (with Brian Croft), Elders in the Life of the Church (with Matt Schmucker), and Venture All for God: Piety in the Writings of John Bunyan (with Roger Duke and Drew Harris). He is an adjunct professor at Southeastern Baptist Theological Seminary.