It is always encouraging to find biblical principles empirically verified in the academic arena. Christian Smith and Hilary Davidson’s The Paradox of Generosity: Giving We Receive, Grasping We Lose does exactly that. The findings of the book are rather straightforward, and the authors muster ample evidence in their defense. As they write:

Generosity is paradoxical. Those who give, receive back in turn. By spending ourselves for others’ well-being, we enhance our own standing. In letting go of some of what we own, we ourselves move toward flourishing. This is not only a philosophical or religious teaching; it is a sociological fact. . . . [In] failing to care for others, we do not properly take care of ourselves. (1)

While these findings should be welcomed and often referenced, they also demand the church ask some important questions of itself.

Smith (professor of sociology at the University of Notre Dame) and Davidson (PhD candidate in sociology at Notre Dame) find a number of interesting things to be true of generosity that should resonate with anyone schooled in scriptural understandings of charity and love. In measuring the effects of generosity on happiness, bodily health, purpose in living, avoidance of depression, and interest in personal growth, across the board the result is strong and positive. Being more generous is simply better for you by any measure. But it isn’t simply generous acts that matter; it’s generous practices. One does not reap the benefits of the occasional generous action; rather, it is lifestyles of generosity that show the strongest return. Yet, as Smith and Davidson also find, the motive can’t be about the return: “Generosity cannot be faked in order to achieve some other, more valued, self-serving end. Generosity itself needs to be desired. The good of other people must be what we want” (7). Or, thinking of this another way, empirically you can’t let the left hand know what the right is doing. All told, this represents tremendous evidence for the good of doing good. 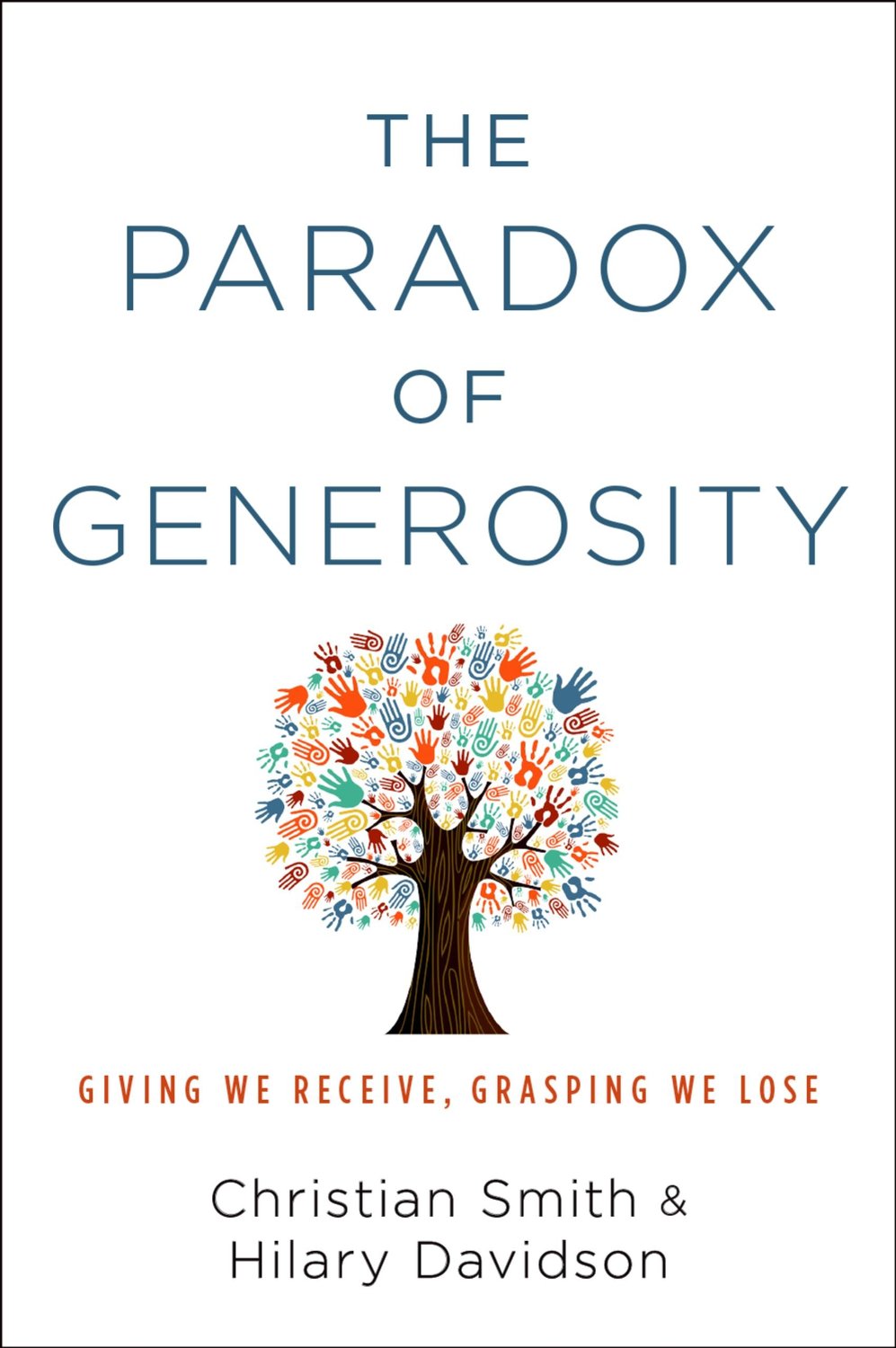 The Paradox of Generosity: Giving We Receive, Grasping We Lose

The Paradox of Generosity: Giving We Receive, Grasping We Lose

But Smith and Davidson’s title is a double entendre. Generosity is paradoxical both because giving results in receiving and also because, despite the benefits, most people are not generous. Generosity proves to be a minority practice, meaning that most Americans miss out on the benefits that generosity can provide. Generosity and love as human capacities remain undeveloped. The authors note that “generosity tends to nurture love in the giver, and love stands at the heart of human flourishing, so generosity naturally tends to promote human flourishing” (97). If one were to look for an apt analogy to Smith and Davidson’s findings, it would actually be Dr. Seuss’s Grinch. The Grinch always had the capacity to be generous and happy, but his lack of generosity resulted in his heart being “two sizes too small.”

As mentioned above, these findings are a boon to the church and strong evidence of the social scientific reality of biblical principle. However, these findings also raise two important issues.

First, the church cannot revel too much in this vindication when we remember how woefully short we fall in regard to practicing generosity. Smith’s 2008 book on giving among congregations, Passing the Plate: Why American Christians Don’t Give Away More Money (another title with a critical double entendre), highlighted the failure of church members to meet the standards set for themselves (i.e., tithing) when it comes to giving. What was more damning in that critique, though, were the ballpark numbers Smith and co-author Michael Emerson ran on how much such undergiving represented in lost resources and lost opportunity to address an untold number of global needs. Despite the clear benefits for the individual, the scriptural injunction, and the amount of good that could be done, the church falls into the second of generosity’s two paradoxes.

Second, Smith and Davidson provide hard evidence that biblical instruction about human nature and purpose correlate with holistic human flourishing. As Smith and Davidson observe early in The Paradox of Generosity, as almost a side note, “In the end, all responsible science comes back to basic human questions about what is finally good and valuable in life” (2).

In addition to his work on generosity and emerging adults, Smith has been developing a sociologically specific interpretation of critical realism and personhood. Beginning with Moral, Believing Animals (Oxford, 2003) and moving into his What Is a Person? (University of Chicago, 2010), Smith pushes toward the idea that we can say things about people and society that are real and true and born of the complex and layered aspects of lived experience. People have various capacities that are or are not realized by virtue of how they interact with social structures and come to live out moral systems. This is where his work on generosity ties in: part of that human reality is the capacity to be generous, which subsequently opens up a range of other capacities—for health, happiness, and purpose.

This is a conversation that other Christian thinkers should take seriously. The Bible offers a host of examples of what it means to live out the imago Dei and to do so in a redemptive manner. There is ample ground to do with a number of virtues what Smith and Davidson have done with charity. And for both the sake of strengthening the Christian voice in public discourse and the sake of disciples who could use the encouragement of such evidence, this is a project that should be taken up enthusiastically.

Cole Carnesecca is a PhD candidate in sociology at the University of Notre Dame and an associate at the Global China Center.